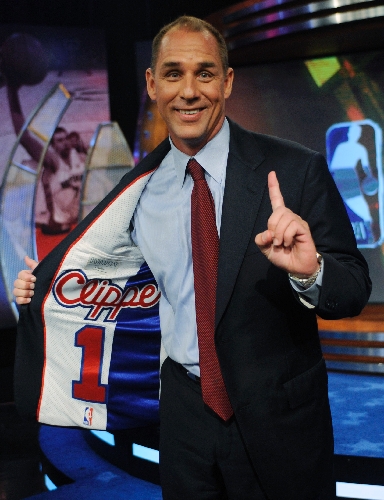 It’s hard to tell whether Andy Roeser is the world’s greatest optimist or merely a basketball masochist.

The man has worked virtually his entire adult life for the Los Angeles Clippers. Twenty-eight years, to be exact. Think about that – employed by an organization that for decades embodied what’s wrong with sports, whose owner has been condemned by his fans as a pariah lording over a franchise that has defined the cliche “culture of losing.”

“I’m a person who enjoys challenges and likes to build things, not just for this year but for the long term,” said Roeser, the Clippers’ 53-year-old president who joined the team in 1984 when Donald Sterling moved it from San Diego to Los Angeles and has been in charge since 1986. “It’s a priceless opportunity.”

Tonight, the Clippers look to add another chapter to their new, positive image by playing host to an NBA preseason game in Las Vegas. Just as they followed the crosstown Lakers into Staples Center more than a decade ago, the Clippers bring their preseason act on the road to Southern Nevada, something the Lakers have done for years.

But this is different. Instead of playing at the Thomas & Mack Center, which has hosted every type of NBA competition – preseason, regular season, postseason, All-Star Weekend – the Clippers will face the Denver Nuggets at Mandalay Bay Events Center. It’s billed as the first NBA game on the Strip.

“We’ve had a partnership with Mandalay Bay for years, and we were looking to expand that relationship,” Roeser said. “We think it’s going to be exciting, being on the Strip.”

Roeser had wanted to do a Las Vegas game with the Clippers for some time. But he knew he had to wait until the timing was right. The Clippers struggled for years to draw fans to regular-season games in Southern California. Who besides superfan “Clipper Darrell” was going to come to Vegas to watch them in an exhibition game?

But that changed when they drafted Blake Griffin No. 1 in 2009 and traded for Chris Paul last year. Suddenly, the Clippers went from sorry to respected, and their first playoff appearance in six years last spring – only the third postseason trip in 18 years – validated the fact a new era had arrived.

“I don’t burden myself with the past,” Roeser said. “I’m a forward-looking person. I always look at what can be done to move forward. It’s an entirely new era. We have two bona fide superstars in Blake and Chris, and we’re working toward building around them. Everyone looks at what the Clipper brand is today.”

Suddenly, it’s hip to be a Clippers fan. Staples Center sells out virtually every night. Television ratings are up. The days of playing before sparse crowds in the grungy L.A. Sports Arena and watching underachievers such as Benoit Benjamin, Michael Olowokandi and Darius Miles are a distant memory.

“We’re excited about where things are headed,” Roeser said. “We’ve had a presence in Las Vegas for some time. We’ve televised our games there for years. We’ve had a team in the Vegas Summer League for the last few years. We thought the time was right to bring a preseason game to Vegas.”