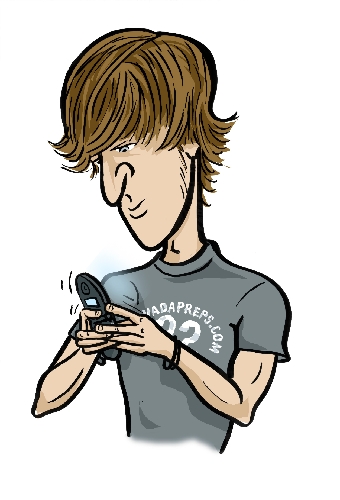 With still one week to go, the playoff matchups in the Sunset Region already are decided.

They’re basically playing for nothing this week, which makes those games hard to pick, even for someone who went 8-1 last week. (That would be me.)

In case you’re late getting to the party (and why didn’t you invite me?), the Sunset matchups will be: Cheyenne at Bishop Gorman; Cimarron-Memorial at Durango; Desert Oasis at Palo Verde (congratulations on getting in, Diamondbacks); and Spring Valley at Legacy.

It’s a different story in the Sunrise, where two weeks remain and playoff spots and positions have yet to be decided. But a lot can be decided this week.

And maybe, just maybe, I can be as perfect as I know I am.

Here are four to score. For more, visit Nevadapreps.com and click on the cutest picture of a cartoon character you’ll ever see.

Silverado, home of the most unimaginative (whoa, big word) offense in the world, was a lot of people’s pick to win the Southeast. And then became the Silverado of last year.

Foothill is tied for second, but with a trip to Basic still on their schedule, the Falcons need this one.

If Parker Riggin can have another big game at quarterback, the Falcons can punch their playoff ticket.

Remember last week when I said I’d keep picking Silverado because I’ll eventually be right … and then picked Basic? Let’s try that again. Foothill by 4.

Then Cheyenne went and found another way to get rid of a coach. Great timing. Perfect. Just as you’re getting ready for the playoffs.

Basic isn’t exactly wowing people with the way it’s playing right now, but the Wolves keep finding ways to win. Offense one week, defense the next.

Who knows what to expect out of Cheyenne this week. This is a team that used four quarterbacks in one game this year. Anything is possible.

Anything, except a Cheyenne win. Basic by 8.

• Cimarron (6-2, 5-2 Northwest) at Faith Lutheran (1-7, 1-6): The end of the line can’t come soon enough for the Crusaders, who get props for a good effort this year but were overmatched.

And they’re not being let off the hook easily. Palo Verde last week, another juggernaut this week.

James Poole, Stephen Nixon and Kenny Banks are getting warmed up for the playoffs. They might not play the entire game this week, with the Spartans’ postseason fate already known. But when they’re in, they’ll be big. Cimarron by 22.

And while the league title has lost a lot of significance, this still is one of the best rivalries around. There’s no use trying to do anything else in Mesquite or Overton when these teams meet; everyone is at the game.

Moapa Valley tuned up with a close 68-point win over Sunrise Mountain last week, giving Kelan Weiss and the Pirates plenty of confidence.

Virgin Valley held on to beat Boulder City last week and will need a huge game from quarterback Humberto Urias and running back Richard Vidal to keep this one close.

Virgin Valley is one of the premier teams in Class 3A but not a match for Moapa this year. Moapa Valley by 18.