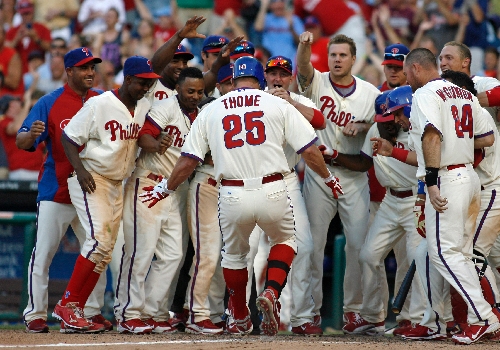 It never gets old.

Thome hit a pinch home run leading off the bottom of the ninth inning to lift the Philadelphia Phillies over the Tampa Bay Rays 7-6 on Saturday after Jonathan Papelbon blew his first save in 18 chances this season.

Thome connected off Jake McGee (2-2) for home run No. 609, tying Sammy Sosa for seventh place on baseball’s career list. It was the major league-record 13th time he did it to end a game.

“You never forget them,” said Thome, who homered on the eighth pitch of the at-bat. “These are moments you never know how long you’ll have them.”

In the first meeting at Citizens Bank Park between the teams since Philadelphia won the 2008 World Series, the Phillies rallied from a 3-0 deficit against James Shields with homers from their Nos. 1-2 hitters. But Papelbon couldn’t hold the lead.

Thome then came through to lead the five-time defending National League East champions out of last place for the first time since May 4. He hit a high drive to left field, jogged around the bases to a rousing ovation and got a cream pie in the face from Shane Victorino afterward on the field.

“That felt great,” the 41-year-old Thome said. “They put whipped cream instead of shaving cream, so that was nice.”

Tampa Bay’s Jeff Keppinger was 5-for-5 with three RBIs in his first game after he missed 29 because of a broken toe.

Papelbon (2-2) allowed his first earned runs in a save situation this season. He walked Jose Lobaton with two outs to extend the game. Keppinger followed with an RBI single. Then Brooks Conrad ripped a run-scoring single to right to tie it. Conrad was 3-for-41 before that hit.

“I’ve got to do a better job,” Papelbon said.

“That was a huge pickup by Jim Thome,” Papelbon said. “I couldn’t be happier for anybody in the clubhouse.”

Shields, who beat the Phillies in Game 2 for Tampa Bay’s only win of the ’08 Series, allowed five runs and seven hits in five innings. Since starting 5-0, Shields is 2-4 with a 4.69 ERA.

“Tip your hat to Thome. He hit a 96 mph fastball off a left-hander, and they beat us,” Rays manager Joe Maddon said. 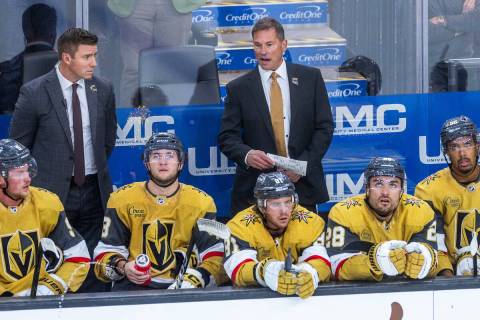 The Golden Knights ended their three-game homestand with back-to-back losses. A trip to Columbus could help the team get back on track.