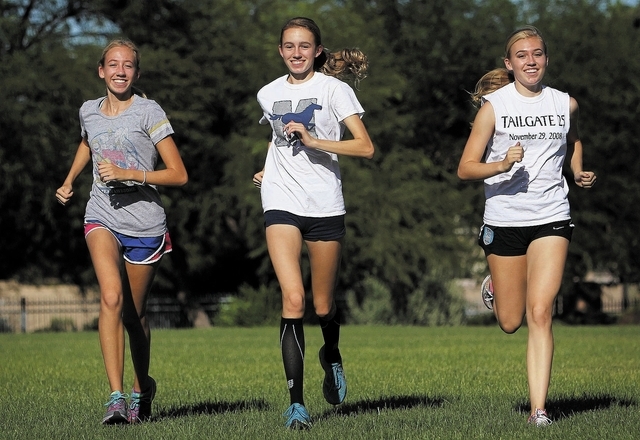 The Meadows’ Gosse triplets — from left, Bailey, Delaney and Cassidy — shown Friday before practice, are two-time winners, along with Jeneke Heerema, of the 3,200-meter relay in state track. Bailey joined the Mustangs’ cross country team in 2012, and her sisters followed this season. (Jason Bean/Las Vegas Review-Journal)

It’s not uncommon to see twins on the same team, but triplets, all three among the top five runners on the same cross country team? That’s rare.

Meet Bailey, Delaney and Cassidy Gosse, juniors at The Meadows.

However, three is not enough. The Meadows finished third in the Division III state meet behind Incline and North Tahoe. That could be different this year with Delaney and Cassidy joining Bailey on the team.

“What has allowed us to become competitive as a team this year was the willingness of Delaney and Cassidy to run with us despite already having an obligation to the school’s cheer squad,” Bernick said.

All three ran track as freshmen and sophomores, and the three of them, along with Heerema, are two-time winners of the 3,200-meter relay at state. Bailey is a two-time state champion in the 3,200, and Delaney picked up a gold medal for the 1,600 relay at state in 2013.

“I did cheer my freshman year,” Bailey said. “Then I did track. And I had a great season there. Then when I was online with (Heerema), she said, ‘You ought to come out for cross country; it’s lots of fun.’ And I tried it, and I agree. It is lots of fun. We did pretty well last year. This year it’s awesome.”

The sisters had a history of running — and of competing with each other. “We all ran when we were younger,” Bailey said. “We’re pretty competitive. We push each other.”

“Some of us more so than others,” Cassidy quipped.

Delaney said she would have run last fall but was injured. And runner-turned-recruiter Heerema made sure Cassidy and Delaney would run this fall.

“I kind of semi–pressured them to come out this fall because I knew from track they are both really good,” Heerema said. “With them, we can compete with bigger schools and have a chance at state. The whole team respects them for running extra after cheer practice and making as many meets as possible.”

Balancing cheerleading and cross country hasn’t been easy for Cassidy and Delaney.

“It means lack of sleep and staying up late to do homework, but we get it done,” said Cassidy, who is holding down the No. 5 spot on the team. “It helps that our coaches are very understanding. I’m committed to this team. I’ll do whatever it takes.”

And participating in a sport and cheerleading means the girls also have to make time to run on their own.

“I am very proud of the progress all the girls have made,” Bernick said. “Jeneke and Krista have improved steadily since they began as freshmen, and Bailey has had a dramatic drop in her times since last year. During practice, these girls are all business. Due to their obligation to the cheer squad, Delaney and Cassidy can only attend about 50 percent of our practices, yet they often will get in some running after cheer practice, at a time when most student-athletes from other sports are going home.”

All three of the Gosses play basketball, and all were on the varsity as sophomores. That athleticism clearly runs in the family. Their older brother Garrett, a sophomore at Princeton, was a three-sport standout at The Meadows and the national winner of the 2011 Wendy’s High School Heisman.

“All my kids enjoy challenging themselves,” said their father, Rick Gosse. “When they approached me with the possibility of all three running cross country and Cassidy and Delaney also cheering, I encouraged it, as long as they realized the time restraints it would place on them.”

And the Mustangs hope that having three Gosses on the squad will lead to a state title in November.