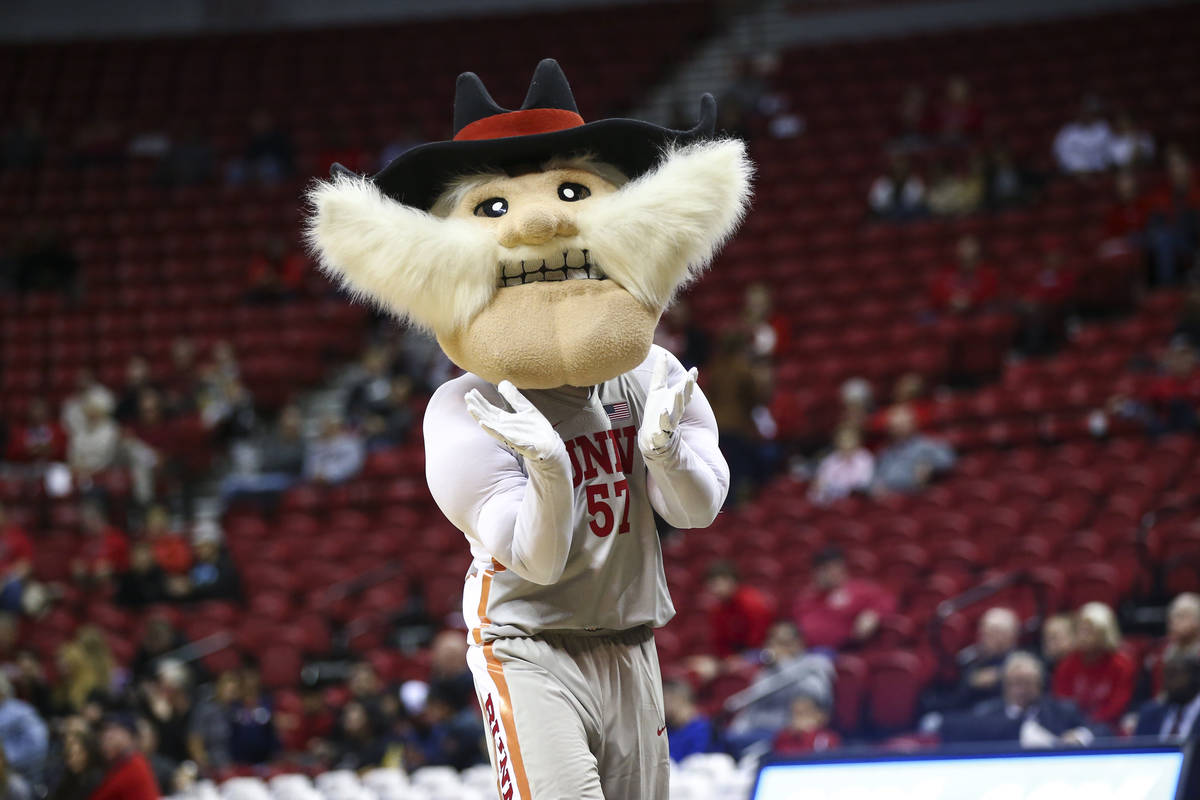 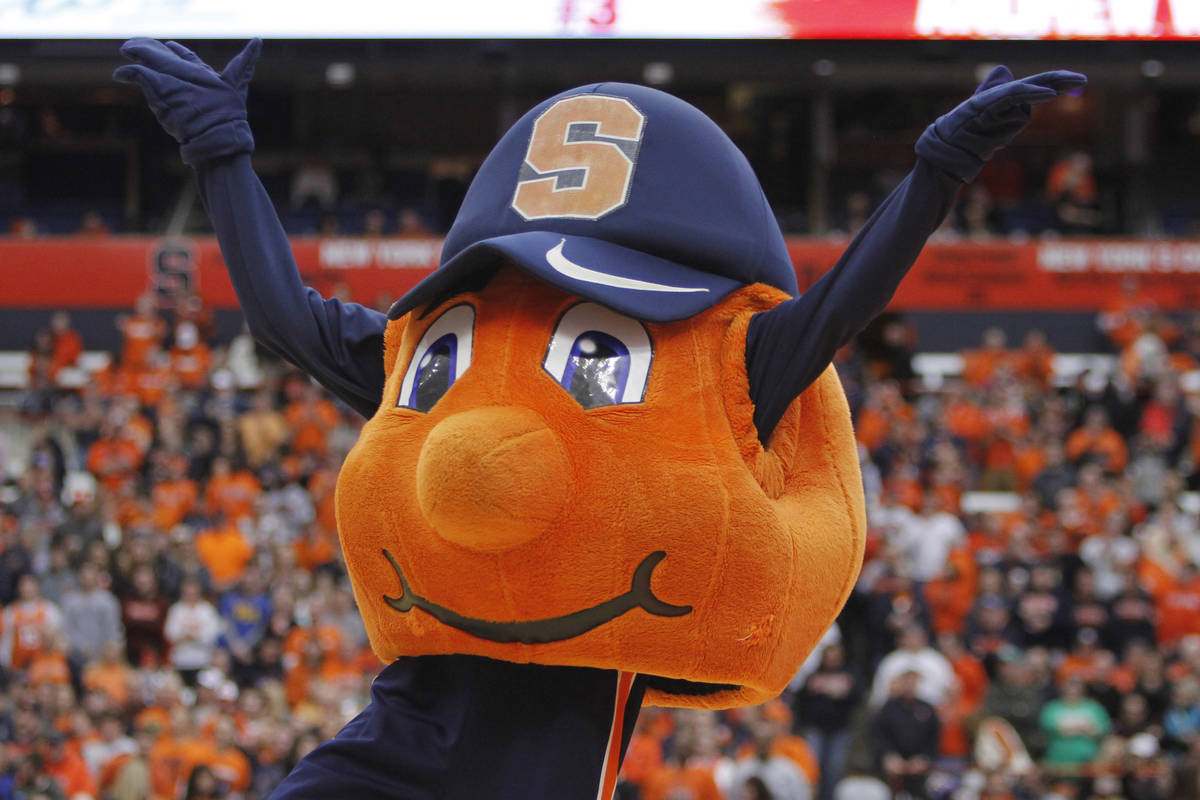 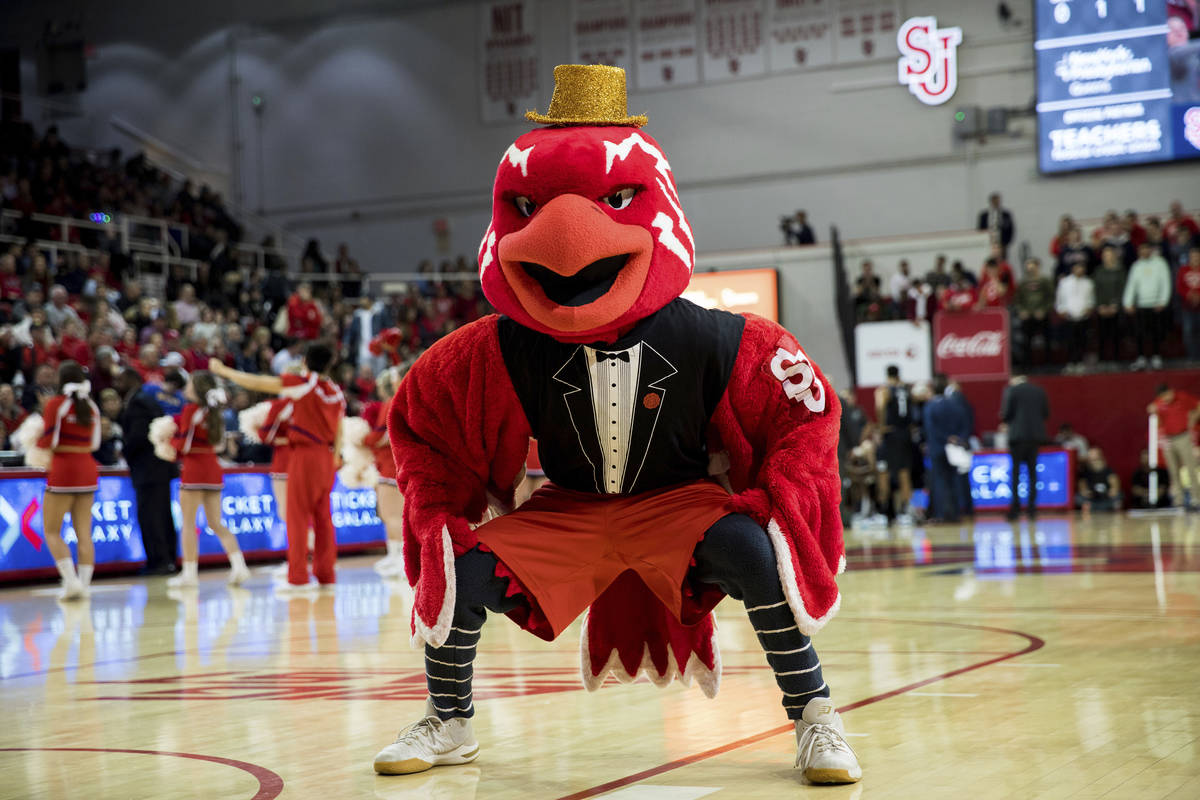 St. John's mascot Johnny Thunderbird rallies the crowd during a time out in the second half of an NCAA college basketball game against Butler, Tuesday, Dec. 31, 2019, in New York. Butler won 60-58. (AP Photo/Julius Constantine Motal) 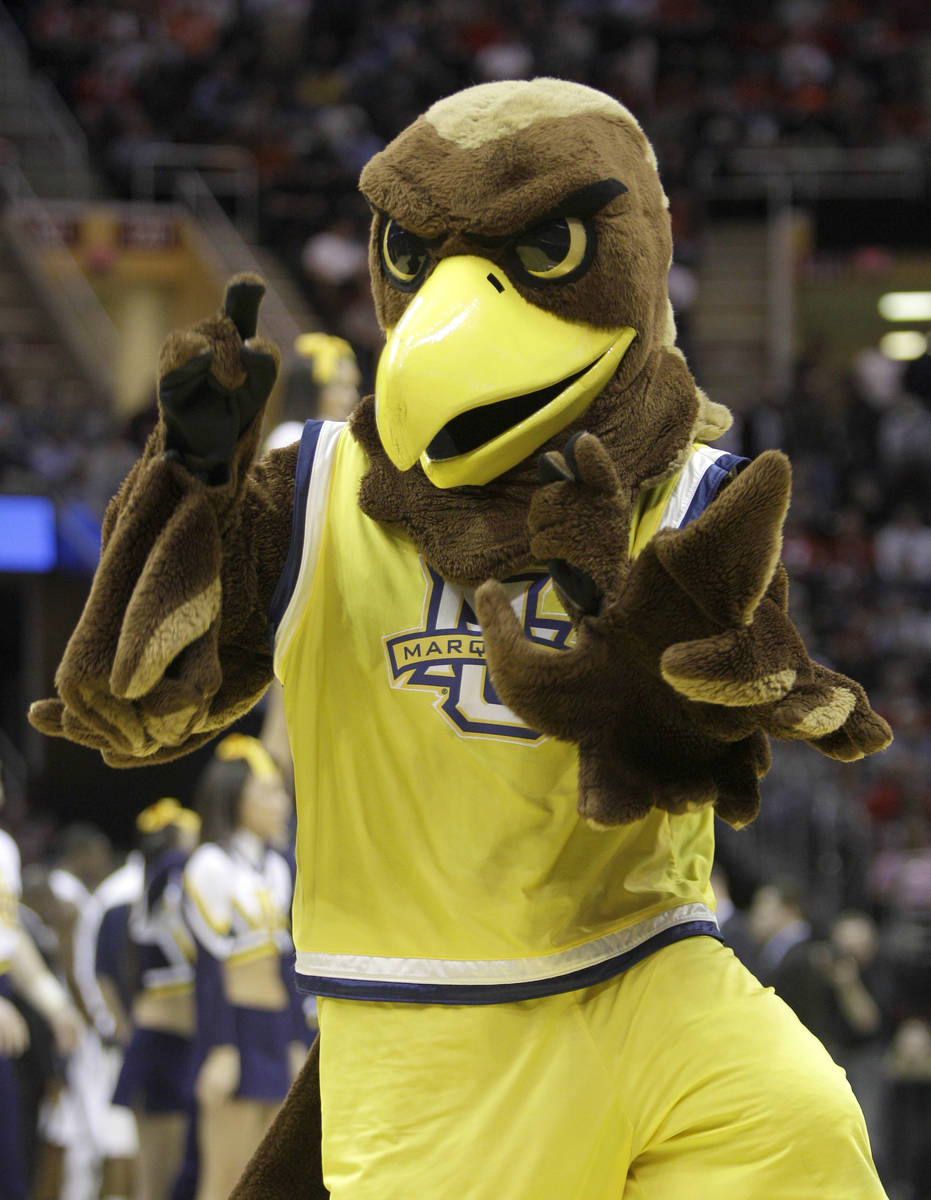 The Marquette mascot dances on the court as the team takes on Xavier in an East regional NCAA college basketball tournament second round game Friday, March 18, 2011, in Cleveland. (AP Photo/Tony Dejak) 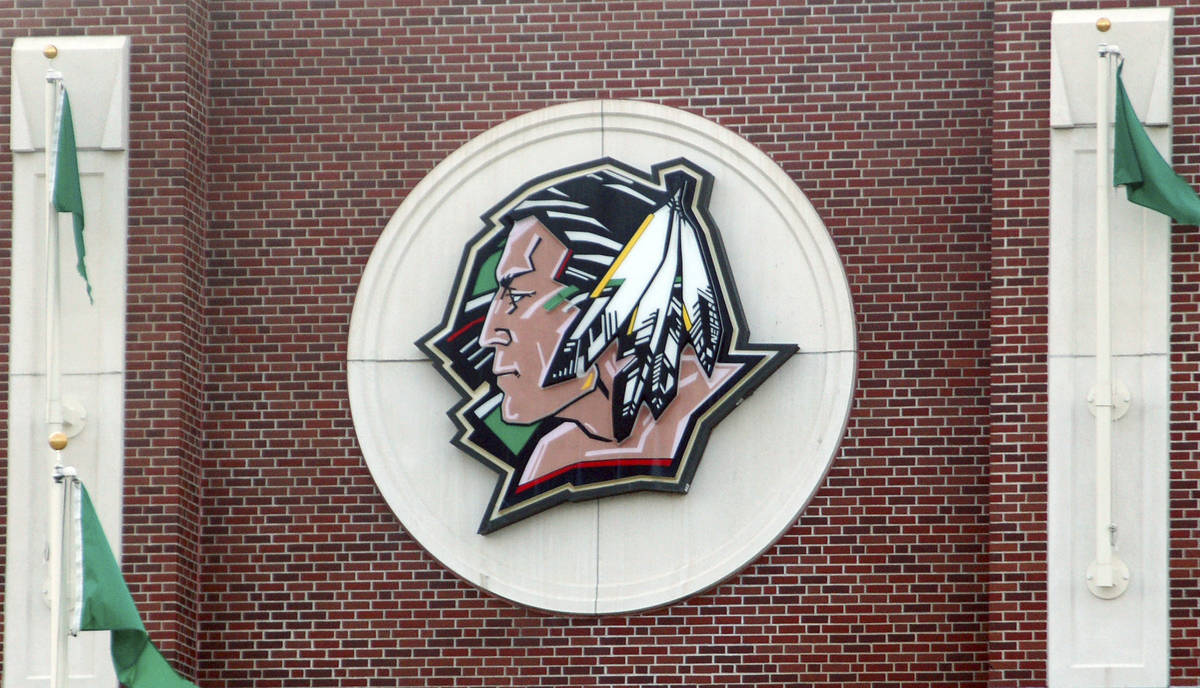 In this Nov. 9, 2010, file photo, the University of North Dakota's Fighting Sioux logo hangs on Ralph Engelstad Arena in Grand Forks, N.D. The school adopted the nickname the Fighting Hawks on Wednesday, Nov. 18, 2015, to replace the Fighting Sioux. Students across the United States are pressuring their colleges to update mascots, mottos and building names that they say are insensitive. (AP Photo/Dave Kolpack, File) 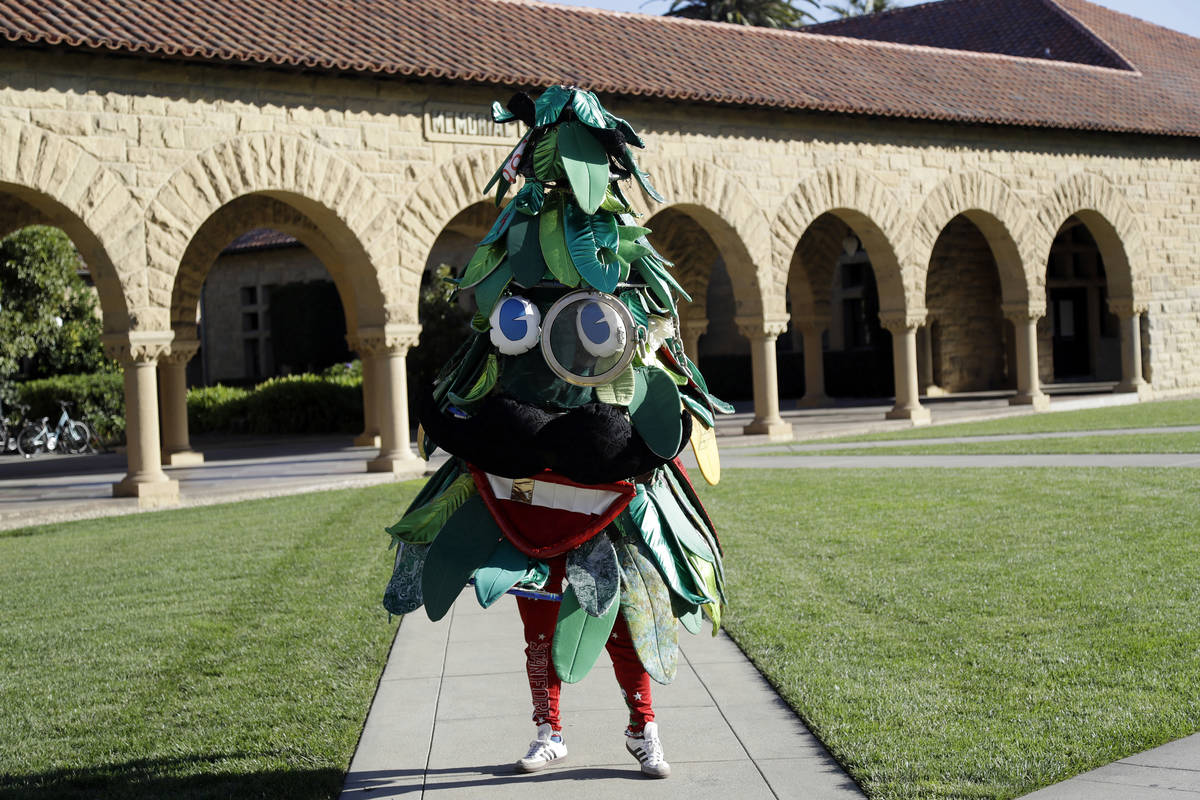 In this Wednesday, Oct. 19, 2016 photo, Stanford University student Sam Weyen, who portrays the Stanford Tree, the school's mascot, poses for a portrait on the university's campus in Stanford, Calif. Do you prefer Chicago’s Benny the Bull or Boston’s Wally the Green Monster? The deviousness of Arizona State’s Sparky the Sun Devil or the goofiness of South Carolina’s Cocky? Or maybe you’re more traditional, and like Penn State’s Nittany Lion. If you’re offbeat, go for Stanford’s Tree. Those are among the choices people could have when the Mascot Hall of Fame announces its ballot of six candidates for the hall at a groundbreaking ceremony Friday in northwestern Indiana. (AP Photo/Marcio Jose Sanchez)

UNLV removed a statue of its mascot, Hey Reb!, from campus Tuesday, sparking conversations on whether the university needs to change its nickname, the Rebels, and mascot.

Over the years, many colleges and universities have made changes to their nicknames and mascots to be more mindful of racial and cultural stereotypes.

Here is a list of schools that have changed their nicknames/mascots since the 1970s:

In 2005, the school stopped using Native American imagery, but continued to use the name Braves.

In 1979, Brown Indians/Squaws was changed to Bonnies.

In 1989, Indiana State University removed Chief Ouabache and “Indian Princess” as the on-field mascots. The team name continues to be the Sycamores.

In 2000, Chieftains was changed to Redhawks.

In 2005, Chieftains was changed to Skyhawks.

In 2007, mascot Chief Illiniwek was retired, but the name remained.

In 2012, Fighting Sioux was retired. In 2015, the Fighting Hawks became the new nickname.

The Indians was later changed to Grizzlies.

In 2002, Indians was changed to Patriots.

In the 1970s, Indians was changed to Big Green.

In 2006, Indians was changed to Mustangs.

In 2002, Indians was changed to Redhawks.

In 1977, Indians was changed to Mavericks.

In 2006, Indians was changed to Warhawks.

In 2007, Indians was changed to Crimson Hawks.

In 1972, Indians was changed to Cardinal.

In 2004, Indians was changed to Redhawks.

In 2019, the school decided to no longer use Indiens. A new name has not been revealed.

In 1998, Maroon Chiefs was changed to Mustangs.

In 2002, Mohawks was changed to Trailblazers.

In 1994, Old Siwash was changed to Prairie Fire.

In 2001, Plainsmen was changed to Prairie Wolves.

In 2001, Red was dropped from the name to become just the Raiders.

In 1980, Red was dropped from the name to become just the Raiders.

In 1972, Redmen was changed to Minutemen and Minutewomen.

In 2006, Redmen was changed to RiverHawks.

In 1992, Redmen and Lady Reds were changed to The Storm.

In 2008, Redmen and Redwomen were changed to RedStorm.

In 1997, Redskins was changed to Redhawks.

In 1998, Redskins was changed to Crimson Storm.

In 2006, Savages was changed to Savage Storm.

In 1980, the Warrior mascot was changed to Otto the Orange.

In 1994, Warriors was changed to Golden Eagles.

In 2015, Zias was changed to Greyhounds.