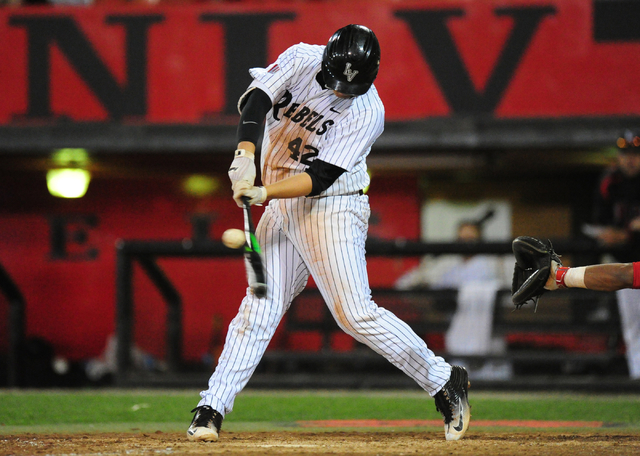 Nick Ames, shown earlier this season, hit a one-out RBI single in the 10th inning to lift UNLV to a 7-6 win over Air Force on Sunday at Wilson Stadium. (Josh Holmberg/Las Vegas Review-Journal)

Nick Ames’ RBI single in the 10th inning sent UNLV to a 7-6 win over Air Force and a three-game sweep of their Mountain West baseball series Sunday at Wilson Stadium.

Max Smith drew a one-out walk in the 10th, moved to third on Kyle Isbel’s second hit of the game and scored on Ames’ single.

Freshman Larry Quaney (2-1), a Cimarron-Memorial product, shut out the Falcons (18-13, 8-7) on two hits over the final two innings to post the win.

Spencer Draws went 3-for-5 with a triple and Bradley Haslam 2-for-5 with a double and three RBIs for Air Force, which matched UNLV’s 11 hits but lost its fifth straight.