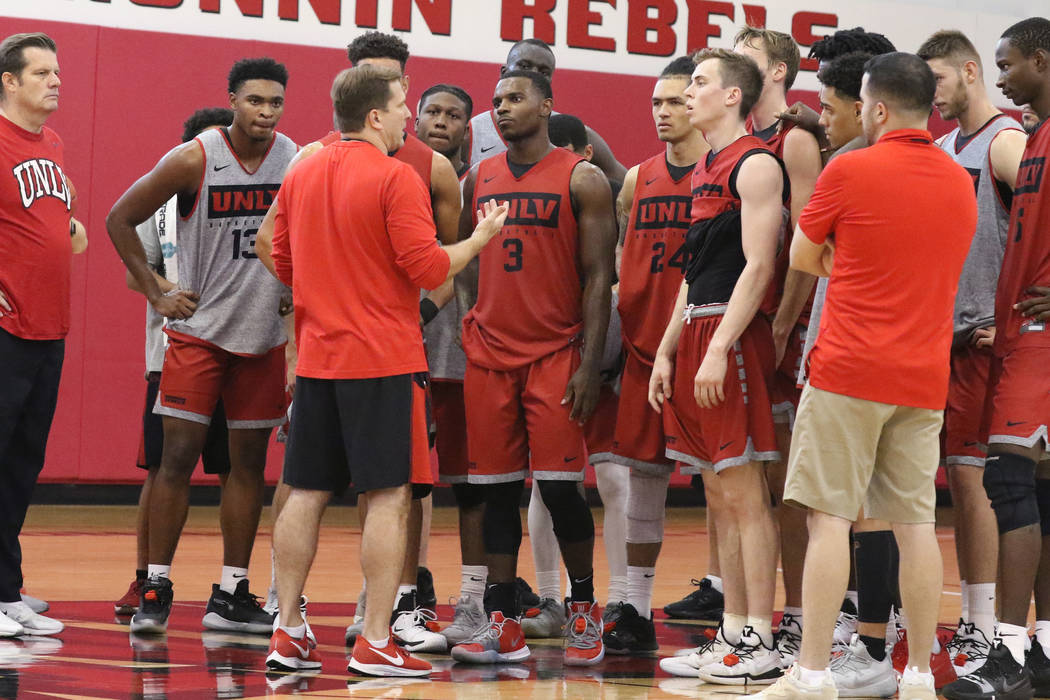 As UNLV has worked behind the scenes to prepare for this basketball season, more is unknown than known about the Rebels.

That will begin to change at 7 p.m. Friday when they play West Coast Baptist in an exhibition game at the Thomas & Mack Center.

Even so, don’t read too much into the results. First-year coach T.J. Otzelberger will be experimenting with rotations and the players will be continuing to transition to a new style of play.

That doesn’t mean, however, the exhibition won’t provide some insight. Otzelberger is especially interested to see the team’s “effort and energy. We’re going at each other every day here, and it’s fun to play somebody else.”

Three questions for the exhibition:

1. How far along are the players in adjusting to Otzelberger’s system?

In compiling a 70-33 record with two NCAA Tournament appearances in three seasons at South Dakota State, Otzelberger ran an up-tempo offense that emphasized NBA-style spacing. He is heavy into analytics. Based on those numbers, he has been stressing the importance of taking more good than bad shots and forcing opponents into more bad than good shots.

Given about half the players return from last season, helping them adjust to a new system will take some time, certainly longer than one exhibition game.

But Otzelberger’s fingerprints should be apparent Friday night, even in a game that doesn’t count in the standings.

2. How will the rotation shake out?

Otzelberger didn’t bite when asked if had settled on a starting lineup. He said that he would decide on one later and that it would shift as the season progresses. It was a statement reminiscent of former UNLV coach Marvin Menzies.

If a UNLV fan were to mortgage his or her home on what the lineup might look like, the probable starters are guards Elijah Mitrou-Long, Amauri Hardy and Jonah Antonio and forwards Donnie Tillman and Mbacke Diong. Hardy and Diong are returning starters. Otzelberger singled out Mitrou-Long and Antonio for their play in Saturday’s scrimmage against Pepperdine, and Tillman was considered a major get when he transferred from Utah.

How deep into the bench the Rebels go will be worth watching, but be careful about reading too much into this game. Otzelberger could experiment with different lineups and give players who otherwise might not receive much playing time extended looks to see how they perform.

3. How will the Rebels respond in their first game-like atmosphere?

Their scrimmage against Pepperdine was behind closed doors, much different from the energy and scrutiny that comes with playing in front of a crowd.

UNLV fans are looking for any reason to get excited about this team, but the Rebels still have plenty of work to do to bring back the kind of crowds who truly create a home-court advantage. One exhibition won’t do it, but it can be a start.

“We will approach it like a regular-season game,” Otzelberger said. “I want our guys to know that every time we take the floor, our objective is to be at our best and to win and be successful. So that’s our mindset going in.”