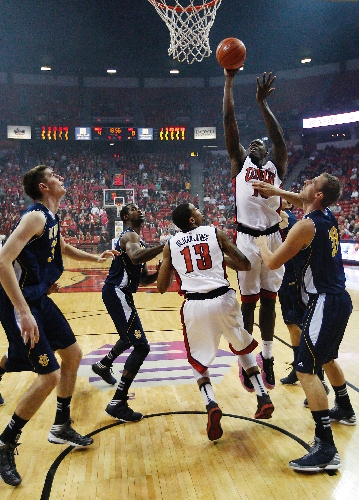 How long will Anthony Bennett stay at UNLV? That’s a question for another day. But it looks as if he’s already a college basketball veteran.

Five games into his career, Bennett is past the so-called transition phase to the next level, and he credits that to his experiences at Findlay Prep.

“I feel like I just played in college for two years, basically,” he said.

The 6-foot-8-inch freshman leads the Rebels in scoring at 19.4 points per game and is the No. 2 rebounder at 7.8 per game. But numbers are a small part of a bigger picture.

“He’s just a dominant player,” senior guard Justin Hawkins said. “The fact that he’s still trying to get acclimated to the college game, just wait until January, February and March when things really get rolling and he gets his rhythm. It’s going to be pretty scary.

“He hasn’t even scratched the surface yet. I’m waiting for him to just explode to even get to half his potential he can reach this year.”

UNLV coach Dave Rice, hearing that comment, responded, “If what Justin said is true, the surface is going to be pretty good.”

The 24th-ranked Rebels (4-1) wrap up a six-game home stand when they face Hawaii (4-1) at 4 p.m. today at the Thomas & Mack Center, and Bennett will face something he has yet to see at the college level.

Vander Joaquim, a 6-10, 245-pound junior, is a true center and skilled scorer who averages 15.6 points and 7.2 rebounds for the Warriors. He can match up physically with Bennett and is more accustomed to scoring in the post.

Bennett is a power forward logging most of his minutes at the 5-spot until Khem Birch, a 6-9 sophomore transfer from Pittsburgh, becomes eligible Dec. 17.

“There’s no doubt I’m playing him a little bit out of position,” Rice said. “Anthony and I talked about it Thursday, and we both feel like it has helped his development to have to play more with his back to the basket than maybe he did previously.

“I think (Joaquim) is going to give anyone who tries to guard him a challenge.”

Rice said he has “no idea” if he will start Birch at center and Bennett at power forward as soon as Birch is cleared to play. Senior Quintrell Thomas has been Bennett’s primary backup at center.

“I just know that Khem will be a big part of what we do,” Rice said.

Bennett said his former coaches at Findlay Prep, Michael Peck and Todd Simon, played big roles in his rapid development. Peck left to coach in the NBA Development League before this season, and Simon was promoted to replace him. At Findlay, Bennett played with several Division I recruits and against high-quality competition.

Joaquim could test Bennett’s defensive capabilities. On the offensive end, Bennett has been more consistent, shooting 56.6 percent from the field while getting to the free-throw line 44 times (8.8 per game) and hitting 77.3 percent. He also runs the floor and shoots 3-pointers (3-for-11).

“I didn’t know how much I was going to score, to be honest,” Bennett said. “I just wanted to help out with the rebounding and help the team win games.”

Rice had no doubts Bennett would do all of those things immediately.

“I’ve said from Day One, the thing that’s been most impressive to me is how coachable he is and how high his basketball IQ is,” Rice said. “The talent speaks for itself.”

■ NOTES – Freshman point guard Daquan Cook has yet to play, but he might see action soon. “Cook is available,” Rice said. “I think we should just say the redshirt is off of Daquan, and if I don’t play him it’s just because it’s a coach’s decision not to play him.”  In the teams’ meeting last season, UNLV beat Hawaii 74-69 on New Year’s Eve in Honolulu.