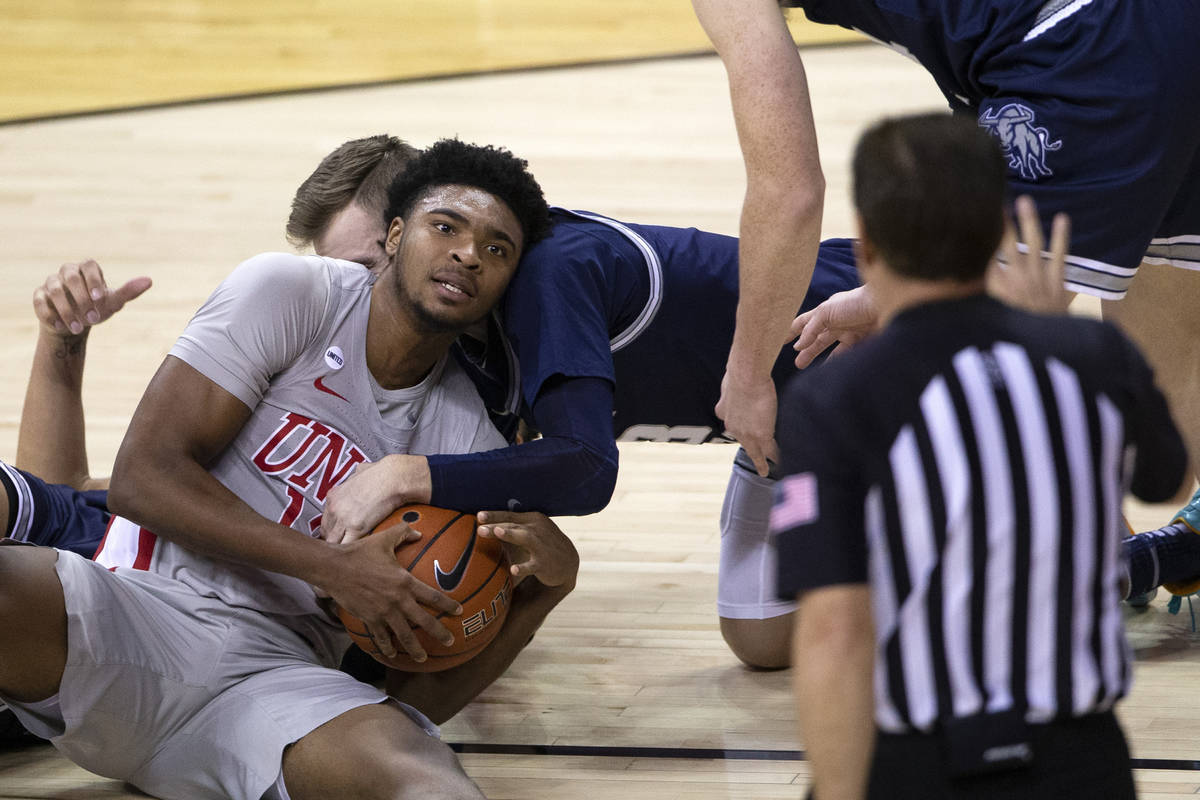 UNLV's guard Bryce Hamilton (13) reacts to a referee's call during the first half of a basketball game against the Utah State Aggie's at the Thomas & Mack Center on Monday, Jan. 25, 2021, in Las Vegas. (Ellen Schmidt/Las Vegas Review-Journal) @ellenschmidttt 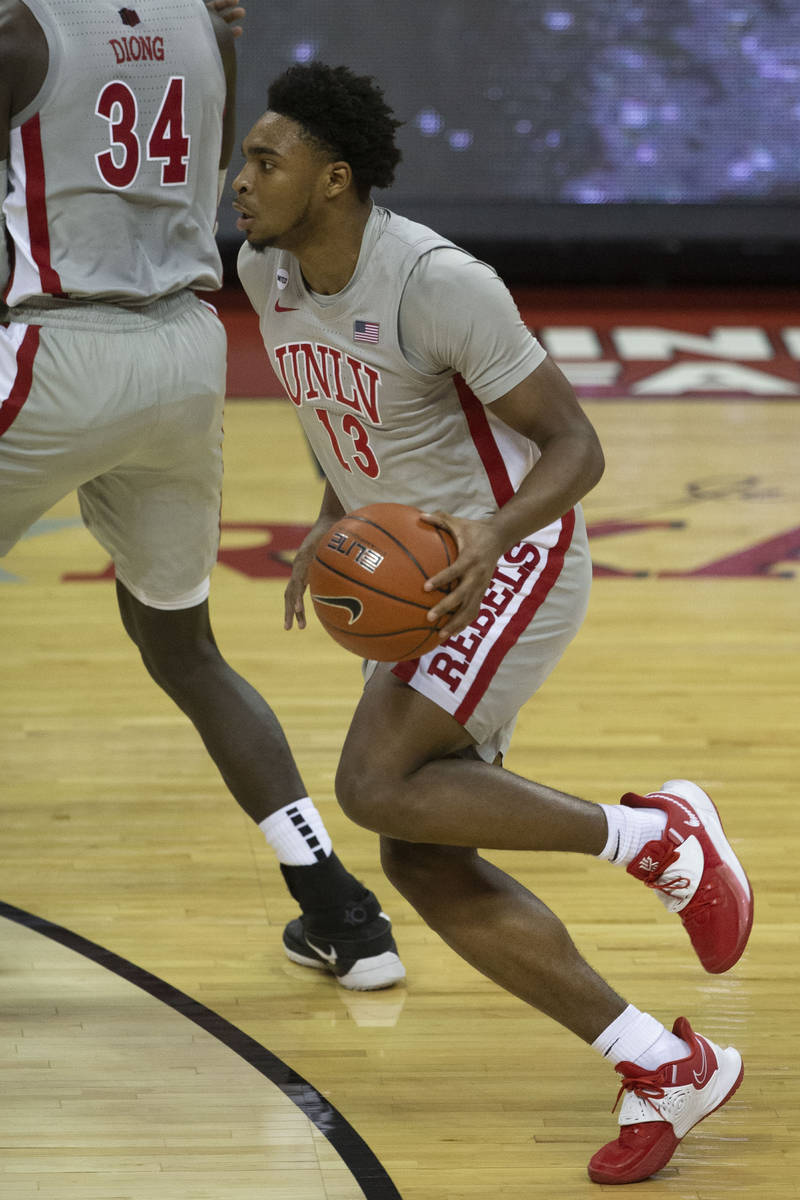 UNLV Rebels guard Bryce Hamilton (13) dribbles the basketball against the against the New Mexico Lobos during the second half of an NCAA men's basketball game at the Thomas & Mack Center on Monday, Jan. 18, 2021, in Las Vegas. (Heidi Fang/Las Vegas Review-Journal) @HeidiFang 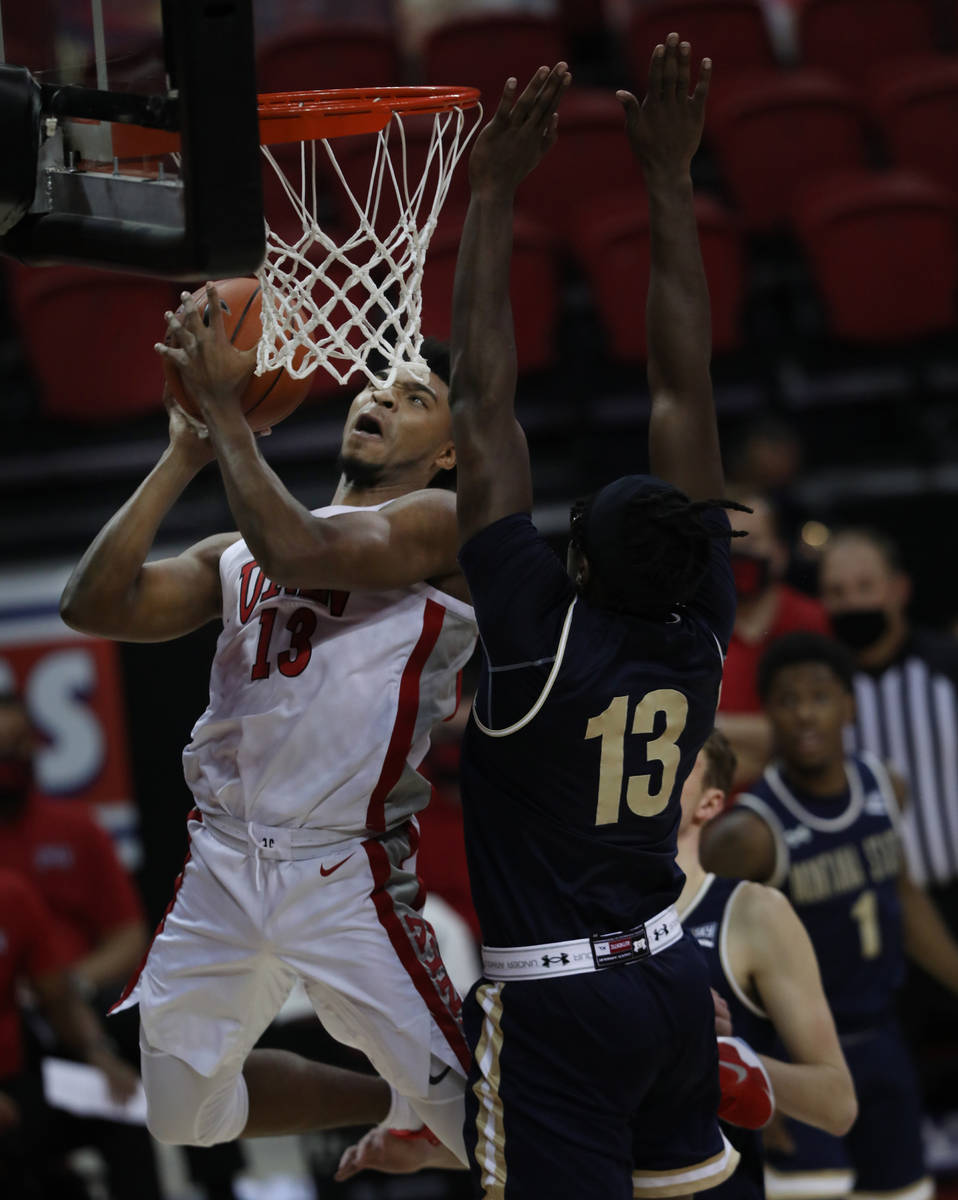 UNLV Rebels guard Bryce Hamilton (13) shoots the ball for a score against Montana State Bobcats during the second half of the season opener at the Thomas & Mack Center, on Wednesday, Nov. 25, 2020, in Las Vegas. (Elizabeth Page Brumley/Las Vegas Review-Journal) @Elipagephoto

After losing two straight this week at intrastate rival UNR without star guard Bryce Hamilton, UNLV returns home not knowing if its leading scorer will be available.

Hamilton, a junior guard who averages 18.3 points, has missed three of the past five games with an ankle injury. He’s still day to day, according to coach T.J. Otzelberger.

Without him, the Rebels had no answer for UNR’s scoring runs and appeared to be lacking leadership.

The Rebels appeared on the rise after a 5-1 homestand that included a split with second-place Utah State, but they have regressed and are seventh in the conference.

“We’ve been focusing on playing through adversity this week,” Otzelberger said. “Because we’re a bit younger and without a true point guard, mistakes can compound.”

Junior guard David Jenkins had averaged 20 points in the four games before the second game against UNR. He scored seven in that one and played only about six minutes in the second half after drawing Otzelberger’s ire for lacking defensive effort.

“David knows what we’re looking for from him,” Otzelberger said. “On a team with a lot of younger guys, he needs to take a tremendous amount of pride in doing his job defensively. We need him to have positive communication with his teammates.”

Jenkins has had help offensively from Moses Wood, a forward who received his first career start four games ago. He has scored in double figures in each of his past five games.

Against Air Force, the Rebels will need to be disciplined defensively and dominate the boards. Air Force runs a Princeton-style offense that is methodical and tries to take advantage of defenses getting out of position with back cuts to the basket.

The Falcons are last in the conference in scoring (59.2 points per game) and rebounding margin (-10.1 per game).

“The rebounding is going to be huge,” Otzelberger said. “Going to the offensive glass, trying to be physical, those things are going to be big this weekend.”

Guard A.J. Walker will be the Rebels’ primary focus. He leads the Falcons with 14.1 points per game, 41 assists and 28 steals.