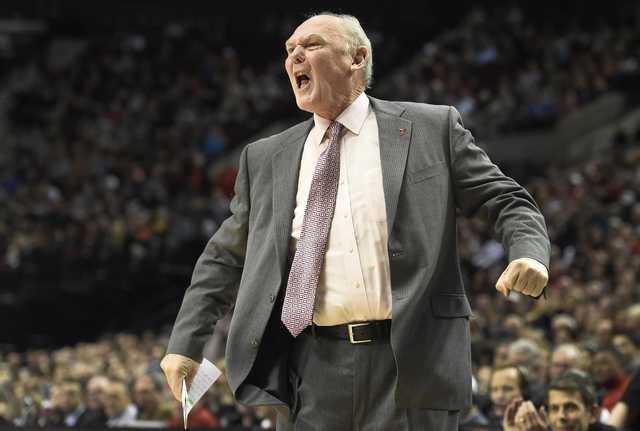 In this Jan. 26, 2016 file photo, Sacramento Kings coach George Karl reacts to a call during the first half of an NBA basketball game against the Portland Trail Blazers in Portland, Ore. (AP Photo/Steve Dykes) 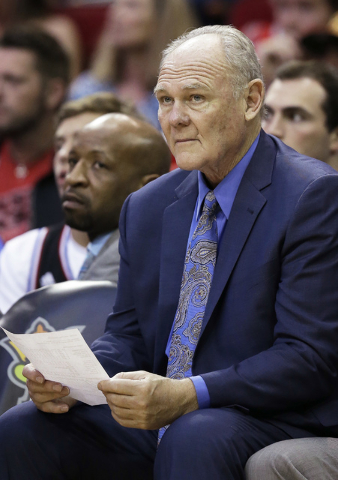 Sacramento Kings coach George Karl watches the action during the second half of the team's NBA basketball game against the Houston Rockets on Wednesday, April 13, 2016, in Houston. The Rockets won 116-81. (AP Photo/Pat Sullivan) 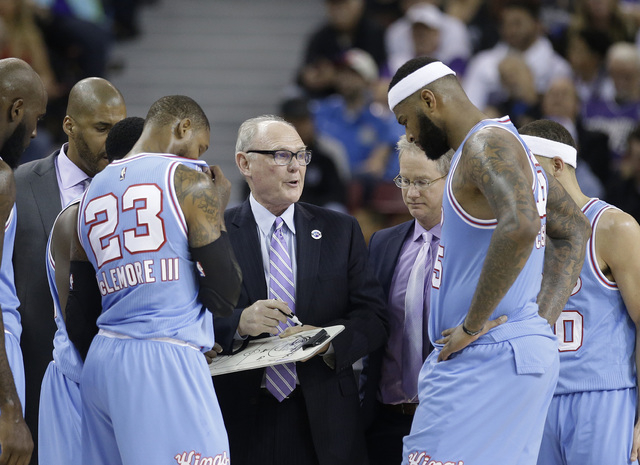 The answers to the first two questions are yes. The answer to the third is we’ll probably never know.

Shortly after UNLV announced it had reached an agreement with Marvin Menzies to become its next basketball coach Saturday, social media sites were rife with rumors that the Rebels could have landed Karl at a bargain basement price.

He would do it, the scuttlebutt said, for $500,000 or less, which is expected to be around $400,000 or less than Menzies will receive next year pending approval of his contract by the University of Nevada Board of Regents.

Karl, 64 and a thyroid cancer survivor, has won 1,117 regular-season games as an NBA coach, more than all but Don Nelson, Lenny Wilkens, Jerry Sloan and Pat Riley on the all-time list, plus another 80 victories in the playoffs.

Karl was fired by Sacramento on Thursday after failing to guide the Kings to the playoffs. After Chris Beard decided on Friday to renege on the UNLV contract he signed seven days ago to take the coaching job at Texas Tech, sources said there was a telephone conversation between Karl and UNLV athletic director Tina Kunzer-Murphy to gauge his interest.

It was pointed out to Karl that UNLV wanted to move quickly after Beard’s decision. Karl, sources said, asked for more time to tie up loose ends in Sacramento, and that apparently is where the conversation ended.

Money was not discussed, according to multiple sources.

A UNLV source said Karl’s agent, Warren LeGarie, was seeking $2 million per year — roughly the same deal UNLV had offered Cincinnati coach Mick Cronin earlier this month. UNLV thought it had a deal before Cronin turned it down and former Arkansas-Little Rock coach Beard and Menzies were brought in for interviews.

According to sources, the $2 million figure was only a starting point for negotiations that apparently went no further. Sports agents, as a rule, do not publicly comment on salary demands so as not to lowball their clients.

With Karl still owed about $7 million from the Kings, multiple sources said he probably would have agreed to coach the Rebels for far less than $2 million annually.

But nothing materialized, and UNLV hired Menzies, who coached New Mexico State to five NCAA Tournaments in nine seasons, finally ending a drawn-out and tumultuous process to replace Dave Rice, who was fired Jan. 10.

The sources familiar with Karl’s situation said he would have put together a coaching staff that probably would have consisted of former Rebels Stacey Augmon and John Welch, a Rancho High graduate, and Karl’s son, Coby, a former standout at Boise State.