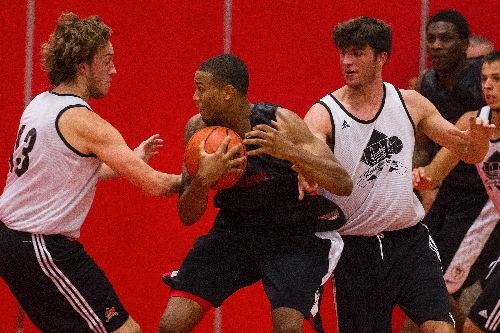 Despite two broken bones in his left hand, sophomore shooting guard Bryce Dejean-Jones has a shot to play in UNLV’s season opener in five weeks.

“I just know how tough Bryce is and how much he wants to play,” coach Dave Rice said Friday after learning the extent of Dejean-Jones’ injury, which occurred during a team workout Thursday.

“Bryce dunked the ball in transition in traffic and just lost his balance and came down on his left wrist,” Rice said. “He got up like he always does, but he couldn’t go, and I was very concerned.”

Dejean-Jones suffered fractures of the third and fourth metacarpal bones in his left hand. He is expected to be in a cast for four to six weeks but will not need surgery.

The Rebels officially open basketball practice at 5 p.m. Friday at the Mendenhall Center, and their regular-season opener is Nov. 12 against Northern Arizona at the Thomas & Mack Center.

Dejean-Jones is expected to start in the backcourt with senior point guard Anthony Marshall. If Dejean-Jones is unable to play by mid-November, senior Justin Hawkins and freshman Katin Reinhardt figure to get more minutes at the shooting guard spot.

UNLV’s second and third games are against Jacksonville State (Nov. 17) and Oregon (Nov. 23).

“It’s never good, but at least we have a little bit of time,” Rice said. “We’ll make sure he is 100 percent healthy before we bring him back because it’s a long season.”

The 6-foot-5-inch Dejean-Jones is arguably the Rebels’ most aggressive player, but fans have yet to witness it. After transferring to UNLV from Southern California following the 2010-11 season, he sat out last year as a redshirt. As a freshman for the Trojans, he started the season’s first 10 games and averaged 7.6 points in 18 games.

Dejean-Jones, from Taft High School in Woodland Hills, Calif., was a standout during the Rebels’ four-game exhibition tour to Canada in August and seemed to secure a starting role in a deep backcourt.

“I know he will work hard to be ready to play,” Rice said. “This is adversity for Bryce and for our team, and we will all support him as he goes through this.”