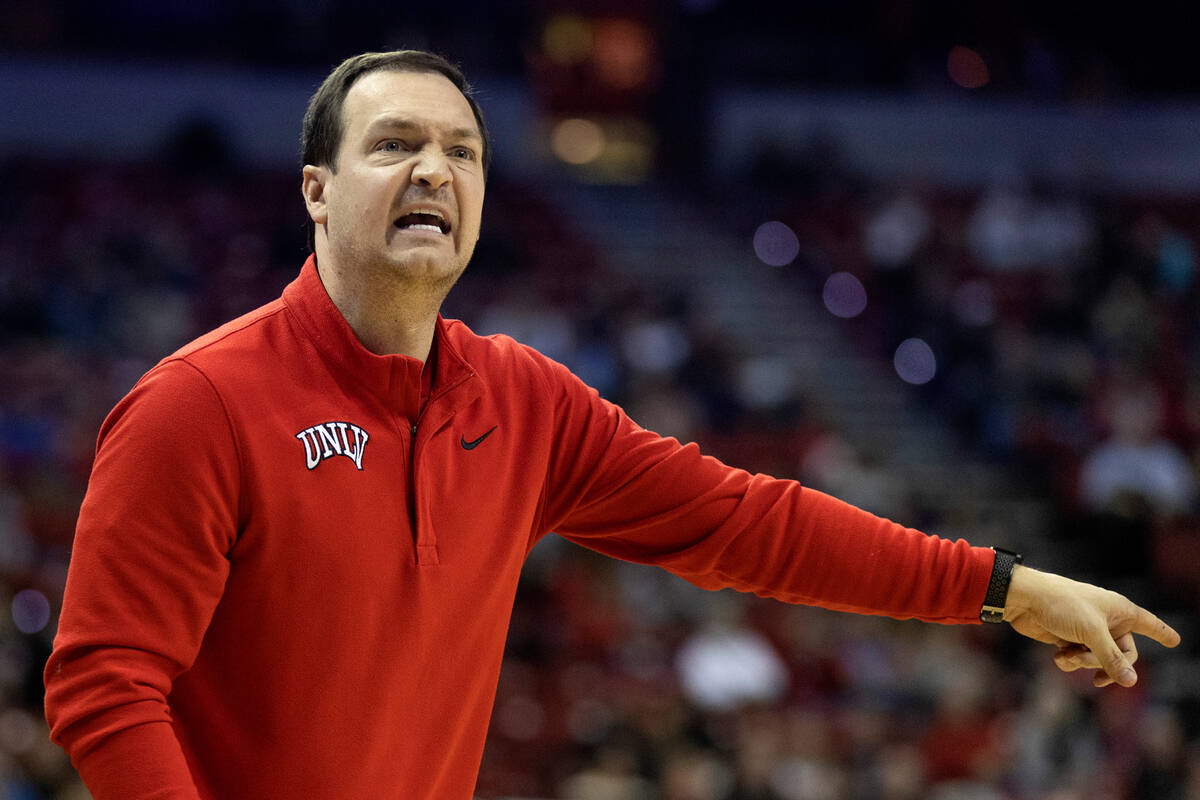 UNLV Rebels head coach Kevin Kruger shouts from the sidelines during the first half of an NCAA college basketball game against the Dayton Flyers at the Thomas & Mack Center on Tuesday, Nov. 15, 2022, in Las Vegas. (Ellen Schmidt/Las Vegas Review-Journal) @ellenschmidttt

SAN JOSE, Calif. — The clock had already expired by the time fifth-year guard EJ Harkless’ shot rolled through the hoop. It didn’t matter. UNLV’s loss to San Jose State had already been confirmed. The only thing that wasn’t official yet was the score.

“We got a reality check today,” Harkless said.

Harkless had 20 points Wednesday — all in the second half or overtime — as the Rebels lost 75-72. Senior guard Justin Webster scored 11, while fifth-year guard Jordan McCabe added eight points, three assists, five rebounds and finished a team-best plus-8.

The game marked the Rebels’ first loss to the Spartans since Feb. 11, 2017, and snapped a 10-game win streak UNLV held in the matchup.

“It’s tough to win road games in conference,” coach Kevin Kruger said. “It’s tough to go somewhere and get a win on another team’s home court.”

McCabe got the start Wednesday in place of sophomore Keshon Gilbert, who arrived in San Jose later than the rest of the team after his return from the Christmas break was postponed by flight delays.

Without Gilbert, the Rebels (11-2, 0-1 Mountain West) fell behind early. Harkless and senior guard Luis Rodriguez went scoreless in the first half. Gilbert entered the game near the 15-minute mark, but he also struggled with his shot. The trio combined for four points in the first half on a combined 1-of-13 shooting.

“We gave them a little cushion and it proved too much to come back from,” Kruger said.

While the Rebels offense sputtered, their defense was also uncharacteristically porous. The Spartans shot 48.4 percent from the floor in the first half. UNLV wasn’t helped by its poor rebounding, as SJSU won the rebounding margin by 10 and led by 11 at halftime. The Spartans finished the game with a 49-35 advantage on the boards.

“They kind of punked us in the first,” McCabe said. “They were stronger. They were the more aggressive team.”

Kruger returned to his regular rotations to begin the second half, bringing Gilbert back into the starting group. A Harkless layup cut the deficit to eight points with 10 minutes remaining. He began to aggressively hunt his shots in the second half, and a mid-range jumper by Harkless with 7:13 remaining tied the game at 58. The Rebels went on a 13-0 run to reclaim the lead, led by Harkless, Rodriguez and McCabe.

Harkless turned the ball over on two of the Rebels’ final three possessions, allowing the Spartans to tie the game on free throws. Rodriguez then made a mid-range jumper with six seconds remaining, but the basket was waived off due to a shot-clock violation.

The Rebels faded during the extra five minutes. They scored seven points and had more personal fouls than rebounds. A 6-2 run during the final 90 seconds of overtime sealed the game for San Jose State.

“We’ve got a huge challenge ahead of us these next couple days,” Kruger said.