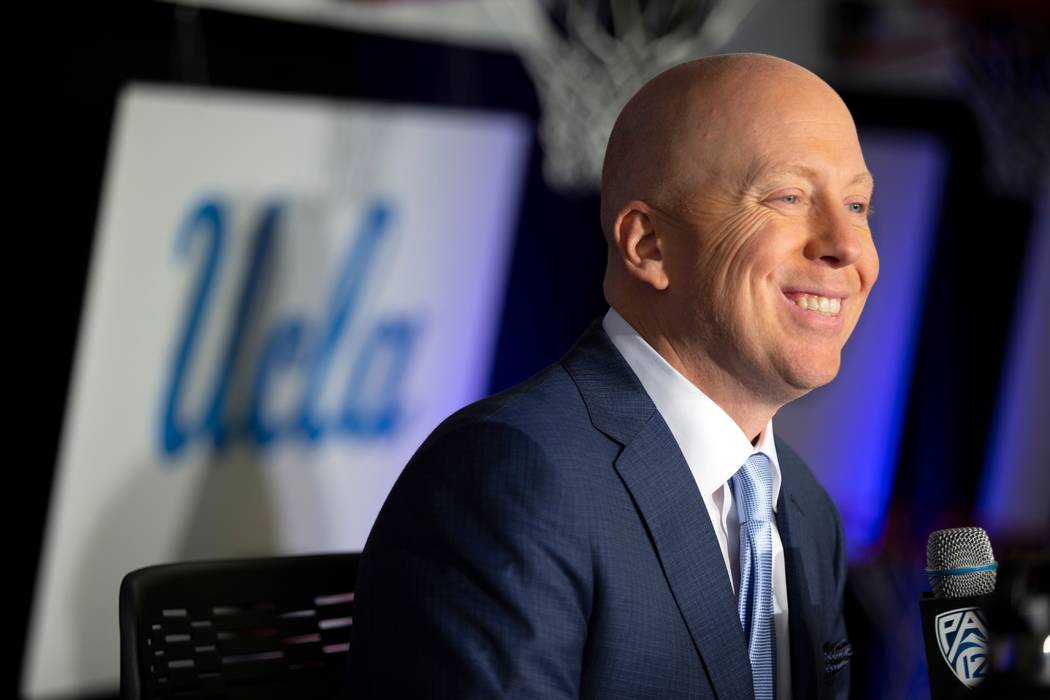 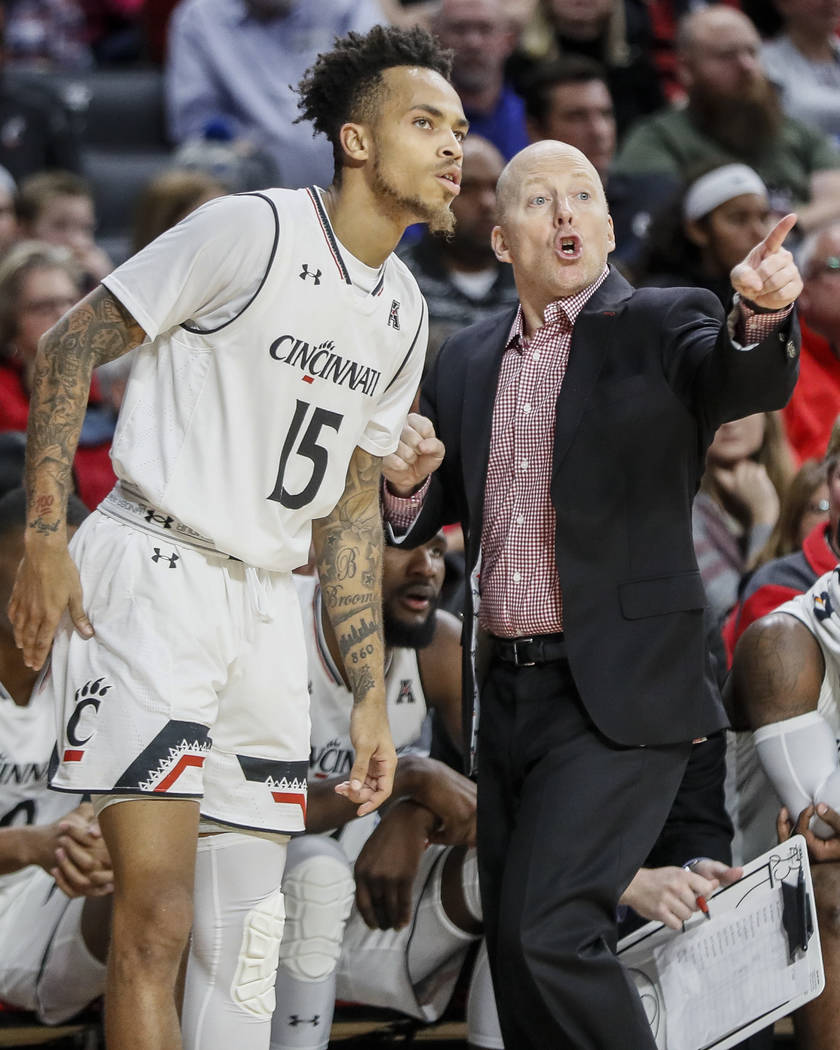 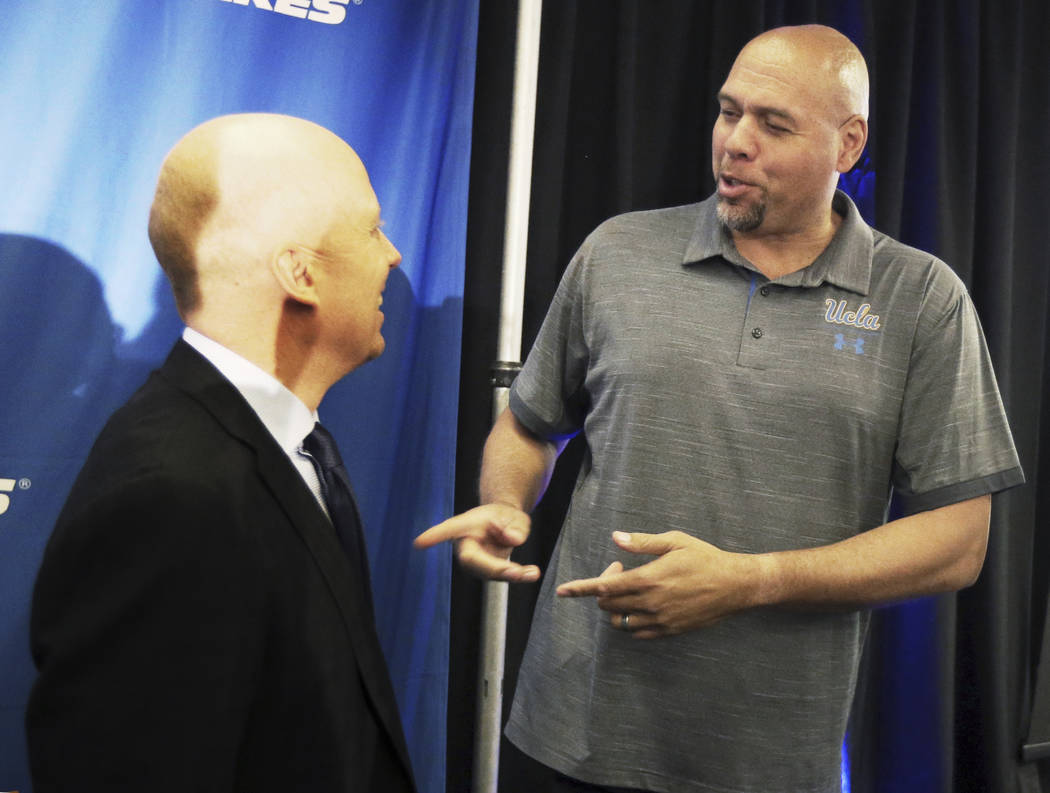 Mick Cronin, left, chats with former UCLA and NBA star Tracy Murray after Cronin was introduced as the UCLA's new head basketball coach at a news conference on the campus in Los Angeles Wednesday, April 10, 2019. Cronin was hired as UCLA's basketball coach Tuesday, ending a bumpy, months-long search to find a replacement for the fired Steve Alford. The university said Cronin agreed to a $24 million, six-year deal. (AP Photo/Reed Saxon) 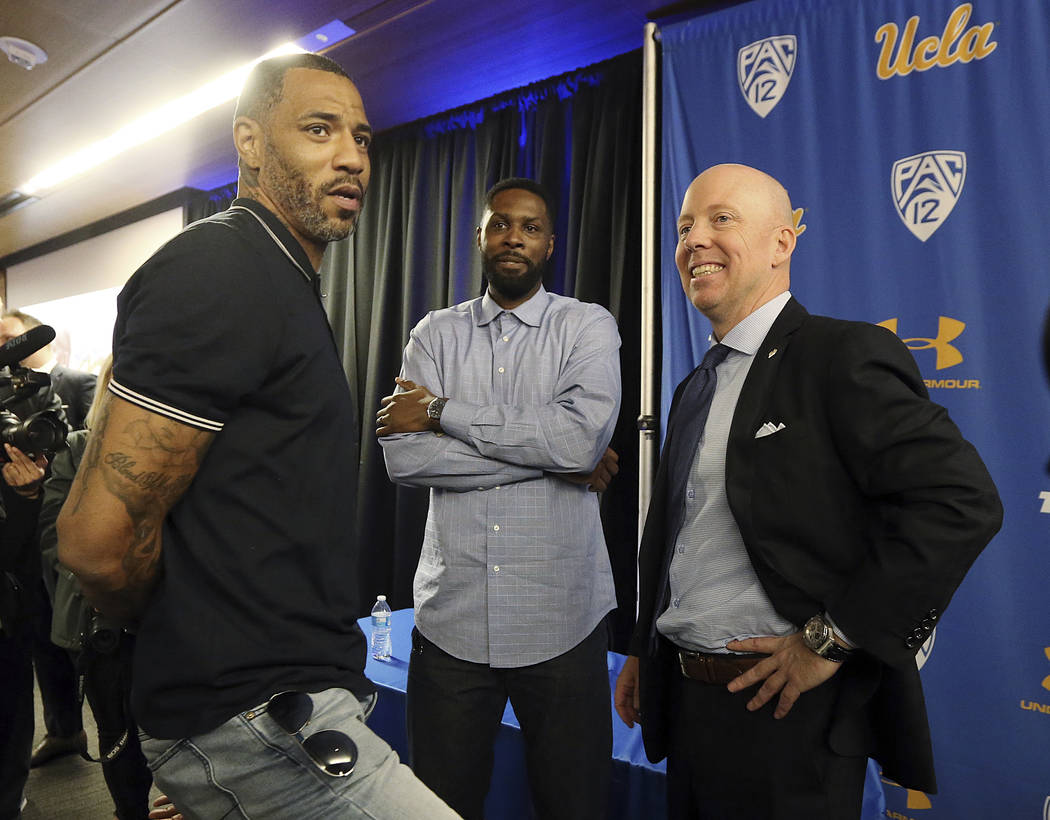 Mick Cronin, right, chats with Cincinnati and NBA star Kenyon Martin, left, and Ronald Allen, who played for Cronin at Cincinnati from 2005 to 2007, after Cronin was introduced as the UCLA's new head basketball coach at a news conference on the campus in Los Angeles Wednesday, April 10, 2019. Cronin was hired as UCLA's basketball coach Tuesday, ending a bumpy, months-long search to find a replacement for the fired Steve Alford. The university said Cronin agreed to a $24 million, six-year deal. (AP Photo/Reed Saxon) 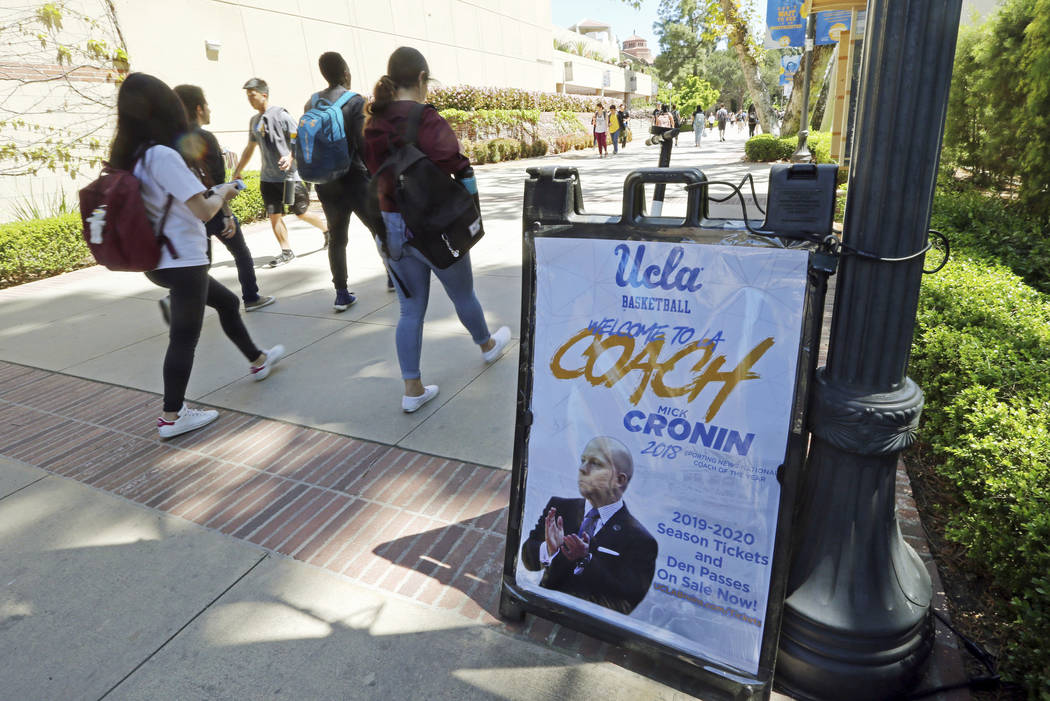 LOS ANGELES — UNLV athletic department officials weren’t the only ones who thought Mick Cronin might be the right coach for their basketball program.

The Rebels, who offered Cronin the job in 2016, were one of several programs he turned down to stay at Cincinnati.

UCLA was different. It has the 11 national championships, a picturesque campus and recognition by U.S. News & World Report as the nation’s No. 1 public university for the third year in a row.

“In my mind, I had a short list of places I would go,” Cronin said. “UCLA was always No. 1 on my list. … You only get so many years in your prime. It wasn’t that hard of a decision for me.”

The Bruins will try to go to 3-0 under Cronin when UNLV (1-2) visits Pauley Pavilion at 8 p.m. Friday. UNLV’s two losses were in overtime to Kansas State and California after letting leads slip late in regulation.

Cronin told the Review-Journal last year when Cincinnati visited that he turned down UNLV because he didn’t want to leave his daughter, Sammi, who now is 12. He was offered the job with many at UNLV believing he was all but signed.

He shares custody with his ex-wife, Darlene Taylor, who agreed to move to Southern California. Cronin said Thursday “that was a big key for us.”

Like UCLA, the Rebels are in transition under a first-year coach, T.J. Otzelberger. Both programs also carry enormous expectations, though Cronin said social media has intensified pressure even at the high school level.

“At our level with the money, you can’t have your cake and eat it, too,” he said. “We get paid what we get paid. You’re being paid to handle the pressure and the expectations. … I think every job has gotten to be like that. I felt that at Cincinnati. There were people there that didn’t think I did enough.”

Cronin, 48, went 296-147 over 13 seasons at Cincinnati, leading the Bearcats to the NCAA Tournament each of the past nine years. They won the American Athletic Conference tournament title the past two seasons, and he was the Sporting News National Coach of the Year in 2018.

When UCLA came calling in April, Cronin agreed to a six-year, $24 million contract. Though Cronin knows UCLA fans are famously impatient, he noted that predecessors Ben Howland coached for 10 years and Steve Alford for 5½.

Bruins athletic director Dan Guerrero, however, has announced he will retire in June, inserting a level of uncertainty as Cronin tries to rebuild the program.

Cronin pointed out that this was nothing new for him, having at Cincinnati worked for four presidents and three athletic directors while five football coaches also received paychecks.

No matter who is in charge, Cronin knows the bottom line on wins and losses doesn’t change. How he gets there is the question.

He hopes to sign high-level recruits akin to those who join Duke and Kentucky on a yearly basis while complementing them with players more likely to stay for three or four years.

“You never know, but the days of starting five freshmen, that’s not something I think you’re going to see happen here,” Cronin said. “I’m not going to name other schools, but when kids look at some of those schools and they say, ‘They’re going to lose six of their first seven players every year, so he has to play me 30 minutes.’ That’s the allure for some of the incoming guys.

“You have to be a school that kids can see themselves going pro in a short period of time, that they can come in and get the great exposure that our market brings and our brand at UCLA brings.”