UNLV coach T.J. Otzelberger said Friday the school cooperated with the NCAA regarding Joel Ntambwe’s waiver request to play this season at Texas Tech, but also indicated the evidence didn’t support such a claim.

Ntambwe transferred to the Red Raiders in May about two months after Otzelberger was hired to replace Marvin Menzies. Texas Tech is coached by Chris Beard, who briefly served in that role for UNLV after the 2016 season.

Players who transfer between Division I schools usually have to sit out a year, but can petition the NCAA for an exemption based on certain circumstances.

One reason a player can be denied is if the school from which he transfers would have welcomed him back. Otzelberger did not want to lose Ntambwe, who averaged 11.8 points and 5.5 rebounds as a freshman.

UNLV also wanted to keep Jonathan Tchamwa Tchatchoua, who is sitting out a season at Baylor. Other players who left UNLV are playing this season.

On the other end, David Jenkins Jr. is not playing this season for the Rebels after transferring from South Dakota State, where he suited up for Otzelberger.

“We’ve taken a stance on the waivers of pretty much the guys that were essentially run off the program, we’ve supported all those,” Otzelberger said. “Beyond that, we support the decisions that the NCAA makes and how they go about going through that process and kind of leave it in their hands.

“Joel wasn’t run off the team, so we supported the NCAA in the findings that they have.”

Beard said Thursday that he couldn’t understand why Ntambwe’s waiver to play this season was denied.

“I’m basically floored by it, sick stomach all day long,” Beard said. “I just feel terrible for him. It’s not my place to put the case out there in a public light, but I would tell you that he had a more than legitimate case on why I think he transferred from his first institution out of his control.”

Beard isn’t the only coach who is frustrated with the waiver process. Michigan State’s Tom Izzo resigned Thursday from the board of the National Association of Basketball Coaches after forward Joey Hauser’s appeal was denied. 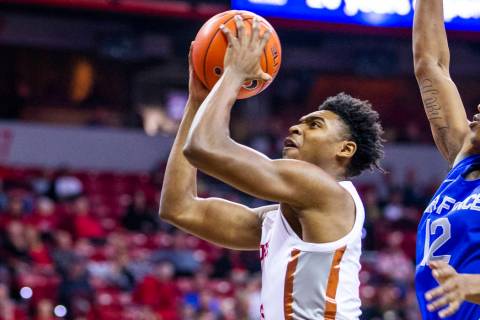 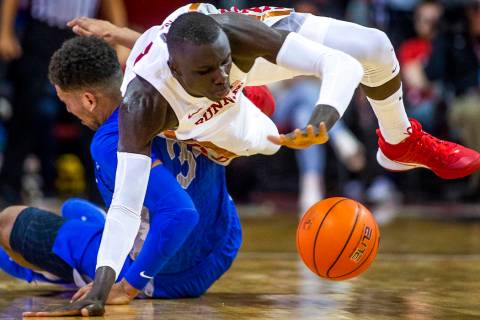 UNLV held Air Force 19 points below its season average, riding that defense and a 17-point game-changing first-half run to a 71-59 win Saturday at the Thomas Mack Center.