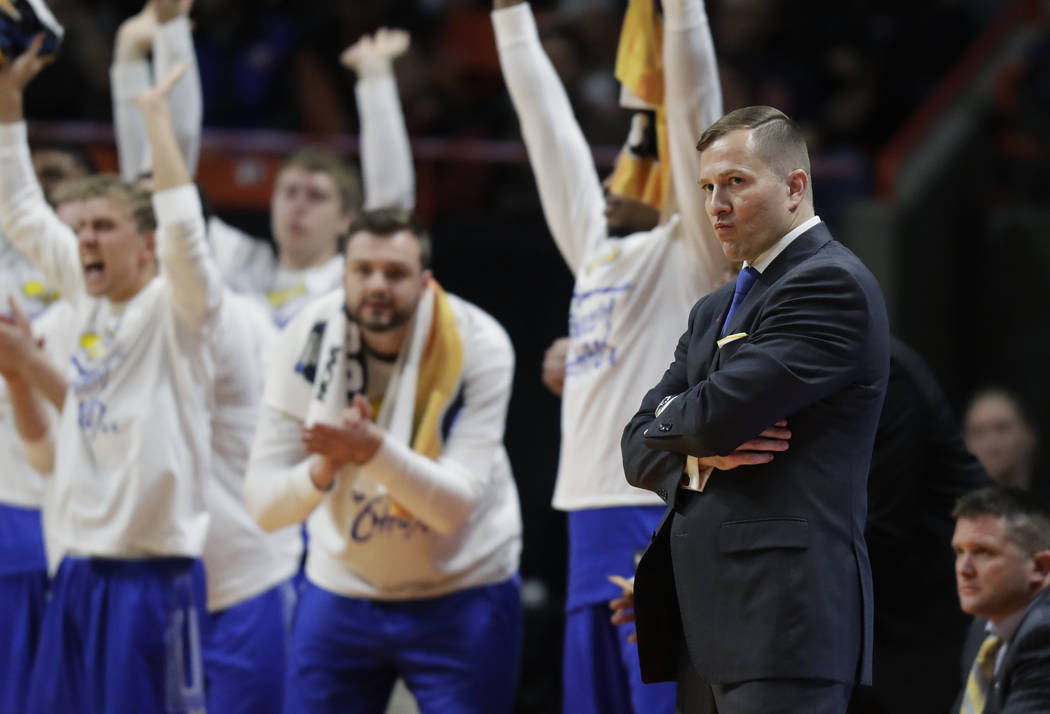 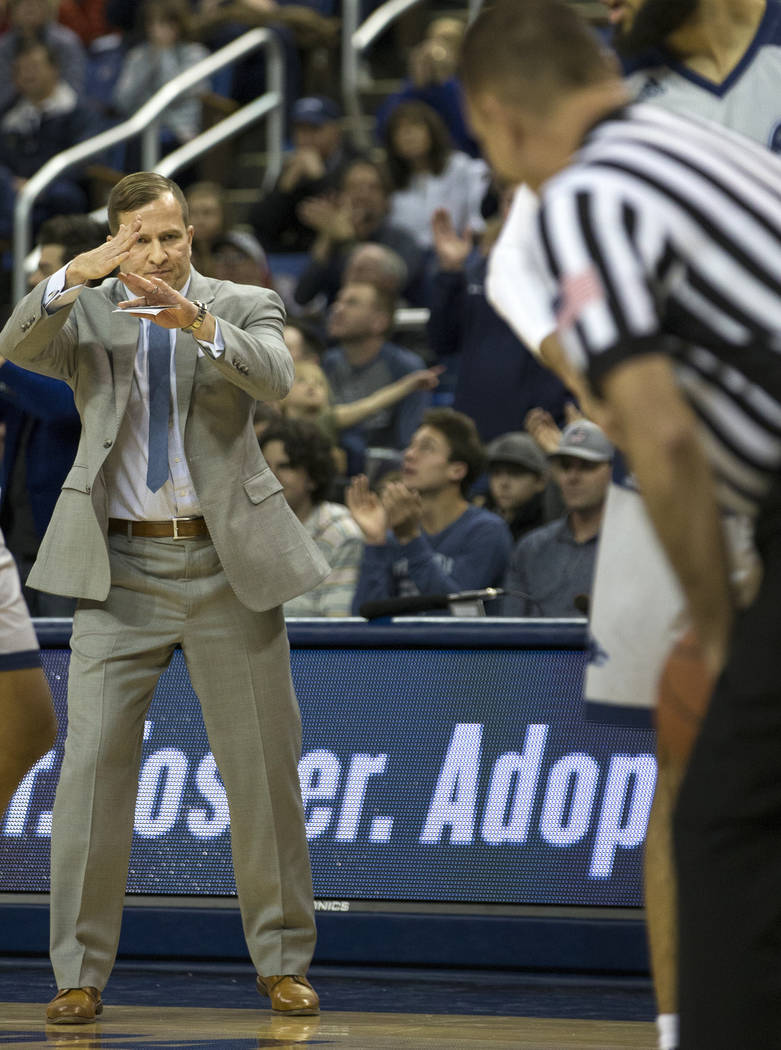 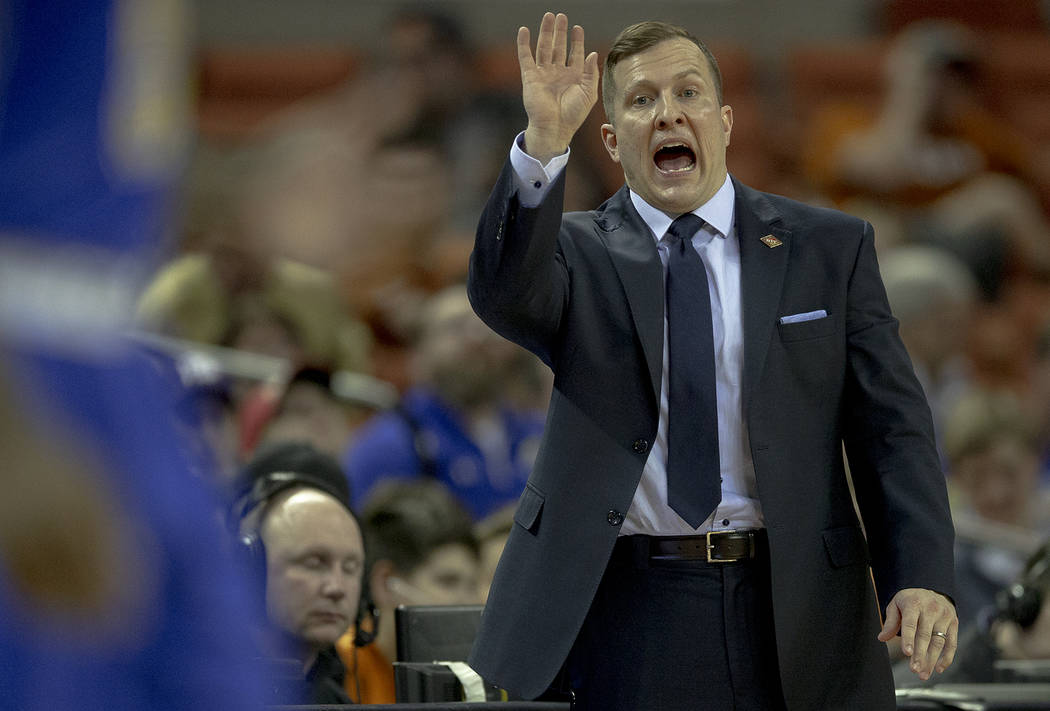 UNLV athletic director Desiree Reed-Francois stuck to her strategy by looking for whom she thinks is an up-and-coming basketball coach to take over the Rebels’ most visible program.

She wound up selecting T.J. Otzelberger, who in three seasons at South Dakota State appeared in two NCAA Tournaments and this year in the National Invitation Tournament. The Jackrabbits won the Summit League each of the past two seasons.

Now it’s up to the 41-year-old to show he can translate that kind of success to UNLV.

“When I set out to find the next coach of our Runnin’ Rebels,” Reed-Francois said in a statement, “I sought a hard-working, laser-focused head coach who personifies our core values; who knows what success looks like; who is passionately committed to winning; and who is at ease with being the face of our storied basketball program. T.J. exemplifies these attributes. I am confident he is the right coach to bring the Runnin’ Rebels into a new era of pre-eminence.”

Reed-Francois will formally introduce Otzelberger at 2 p.m. Thursday at the Strip View Pavilion inside the Thomas & Mack Center. Contractual details, which were not available Wednesday, also are expected to be announced.

And, the new head coach of your Runnin' Rebels is…#BEaREBEL#UNLVmbb pic.twitter.com/mm8YSEfeiu

Otzelberger went 70-33 in three seasons with the Jackrabbits, finishing 24-9 this season. He replaces Marvin Menzies, who was fired March 15.

“I don’t think UNLV fans fully realize the kind of man they are getting as a head coach,” tweeted South Dakota State’s Mike Daum, a three-time Summit League Player of the Year. “He is the best head coach I had in college and am so grateful for that time. He is a coach that is willing to do whatever for his players and community. He will be successful where ever he goes!

“Coach has the ability to bring a group together for a joined cause and get people to buy in to something. UNLV is getting a one of a kind guy and I’m so happy for him and his family!”

Before taking over at South Dakota State, Otzelberger was an assistant coach for eight seasons over two stints at Iowa State and for two years at Washington. He was considered an integral part of the recruiting success at both schools.

“I have been fortunate to coach at some amazing universities, and it was going to take a very special opportunity to leave Brookings (South Dakota),” Otzelberger said in a statement. “UNLV basketball is one of the most storied programs in the nation and situated in one of the world’s greatest cities. I’m honored to have the opportunity to add to the Runnin’ Rebels’ rich history, and my family and I could not be more proud to be the newest members of this world-class university and Las Vegas community.”

Otzelberger has some immediate priorities that include:

— Recruiting/evaluating the current roster. One player said everyone is expected to attend the news conference, a promising sign for the new coach. Seven players have entered the NCAA transfer portal, and Otzelberger will have to decide which ones to make the strongest pitch to stay. Sophomore guard Amauri Hardy should be the top target considering he best fits Otzelberger’s aggressive system. Joel Ntambwe would be another candidate given his 3-point shooting ability. Even those who didn’t enter the portal could use some persuading to make sure they’re committed.

Then there is the other end of it in which Otzelberger must decide which players fit his short- and long-term plans, and help those who don’t find spots at other schools.

— Recruiting future potential Rebels. The spring signing period begins April 17, but most of the top high school players have signed or committed. Otzelberger might find some overlooked high school players who can produce. He also could hit the junior colleges and scour the transfer portal for four-year transfers who could make an immediate impact.

One addition could be South Dakota State sophomore guard David Jenkins, who is from Tacoma, Washington, and the only Jackrabbit from the West. Jenkins averaged 19.7 points this season while making 45.3 percent of his 3-point shots. He would have to sit out a season under NCAA transfer rules, but could be a signal to other UNLV recruits where the program is heading.

— Building his staff. Otzelberger could bring an assistant coach or two with him from South Dakota State, or he could opt for a completely new staff.