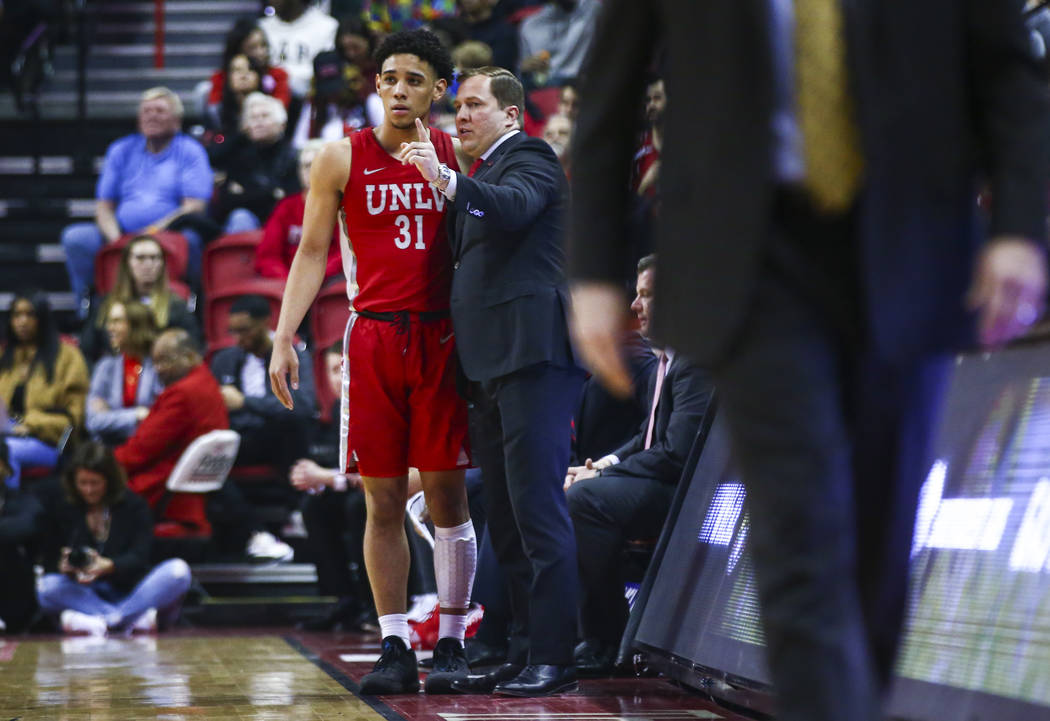 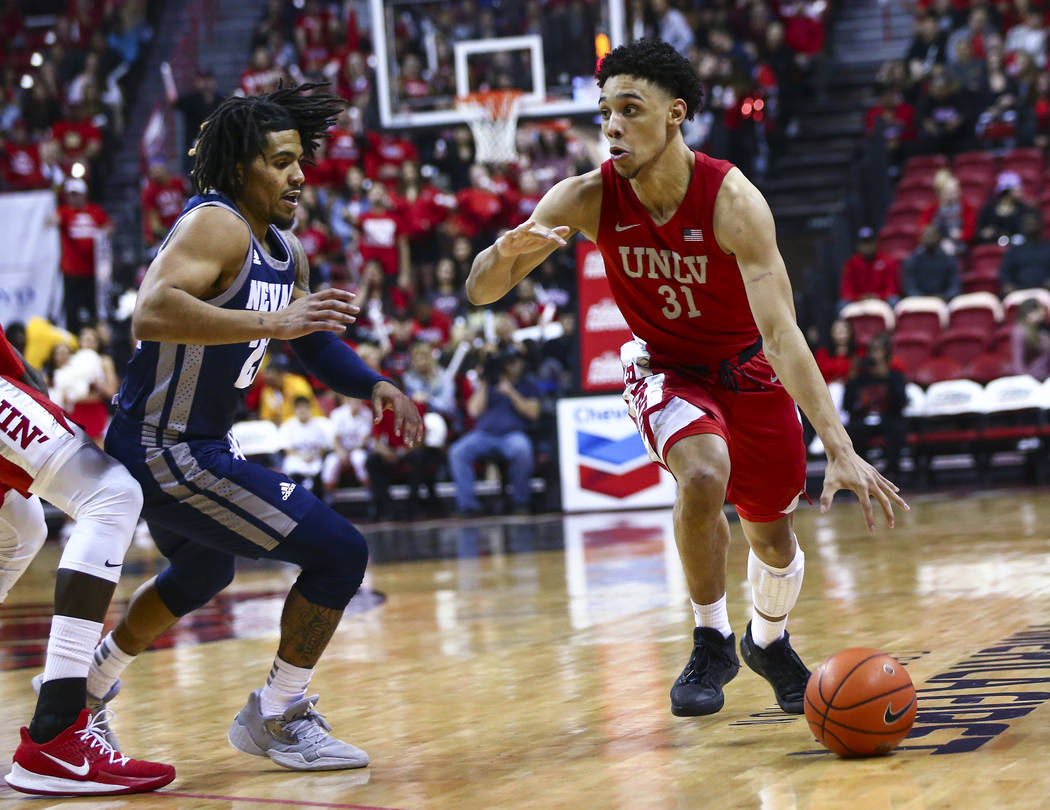 UNLV's Marvin Coleman (31) drives to the basket against UNR's Jazz Johnson (22) during the first half of a basketball game at the Thomas & Mack Center in Las Vegas on Wednesday, Feb. 12, 2020. (Chase Stevens/Las Vegas Review-Journal) @csstevensphoto 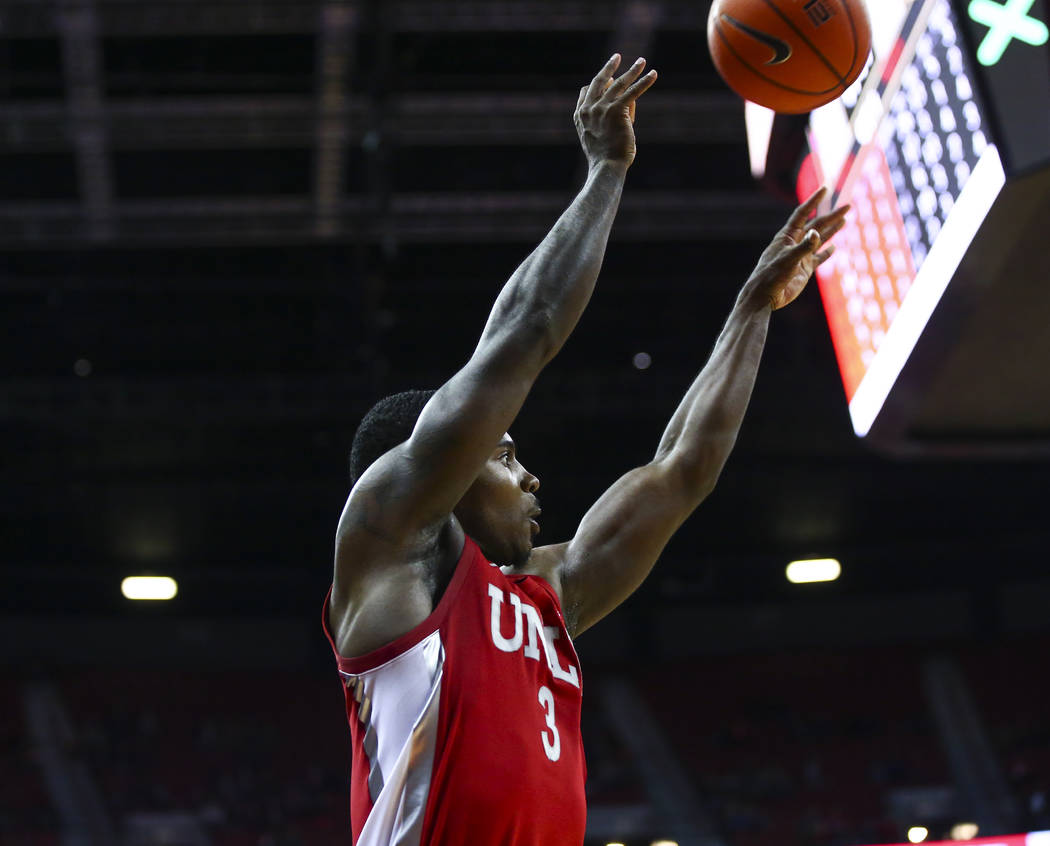 UNLV's Amauri Hardy (3) shoots to even the score against UNR during overtime in a basketball game at the Thomas & Mack Center in Las Vegas on Wednesday, Feb. 12, 2020. (Chase Stevens/Las Vegas Review-Journal) @csstevensphoto

After a 6-1 start in Mountain West play, UNLV stood alone in second place in the conference standings.

The Rebels, though, knew they were about to hit their toughest stretch and that a slide down the standings very well could take place.

That’s exactly what happened, with five losses in their past six games.

When the Rebels (12-14, 7-6 MW) visit New Mexico (17-9, 6-7) at 3 p.m. Saturday, they will be fighting to get back into the top five of the standings. Getting and staying there would mean a first-day bye at next month’s conference tournament at the Thomas & Mack Center. UNLV is sixth, but only a game behind Colorado State and 1½ games behind three other teams.

“Winning on the road is always challenging, and New Mexico is particularly good at home,” UNLV coach T.J. Otzelberger said of the Lobos, who are 14-1 at Dreamstyle Arena-The Pit. “It’s one of the tougher places to play in the league, so it would be a huge momentum win if we’re able to get a win here.”

It’s debatable whether UNLV, however, would be better served getting into the top five and potentially going one-and-out against a higher-seeded team. If the Rebels go into the tournament at No. 6, they will open against the No. 11 seed, which is most likely Wyoming (6-19, 1-12) and face a much better chance of picking up at least one victory.

“You always want to finish as high in the standings as you can,” Otzelberger said. “The other part of it is if you finish four or five, you end up playing San Diego State in the semis probably, which seemingly is the team you would like to stay away from longer. It just depends on how you look at it.”

Odds are the Rebels will finish outside the top five. Three of their final five games are on the road, where the Rebels are 2-7. UNLV’s two home games are against Colorado State and Boise State, which both already have defeated the Rebels and are ahead of them in the standings.

Kenpom’s rating system projects UNLV to lose its next four games before closing the regular season with a five-point victory at San Jose State. If the schedule plays out that way, the Rebels would be 13-18 overall and 8-10 in the league going into the conference tournament, probably dropping them to seventh.

But Kenpom has three of those potential losses ending within a possession, so UNLV has an opportunity to also finish strong.

The Rebels, however, are expected to be without junior forward Donnie Tillman, who has a knee strain, for the rest of the season. He was averaging 10.1 points and 4.7 rebounds.

“You get to this point in the season, and injuries are a part of the thing and guys get sick,” Otzelberger said. “Trying to have your team healthy and at their best is really important, so we try to be really mindful of with how we practice and do things for our guys.

“Every game is an opportunity. San Diego State has certainly separated themselves from the field, but I think on any given night, really, there’s no sure thing in the league.”