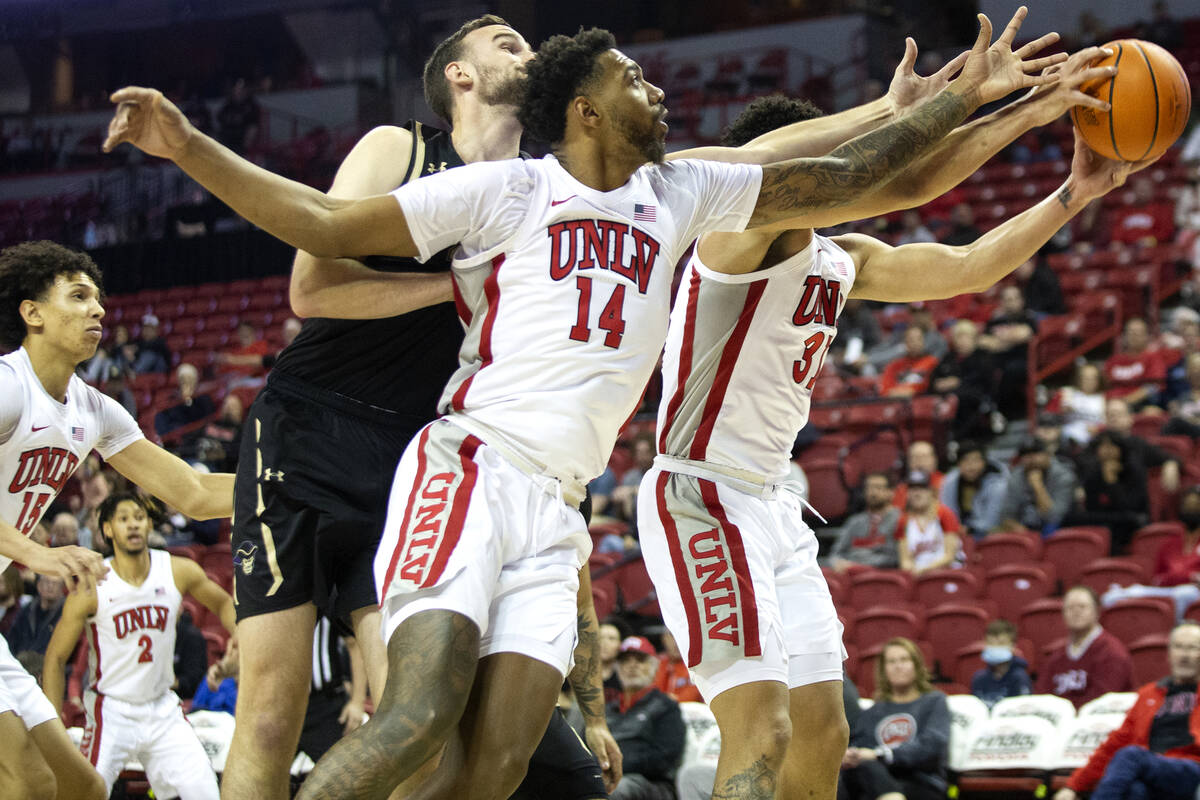 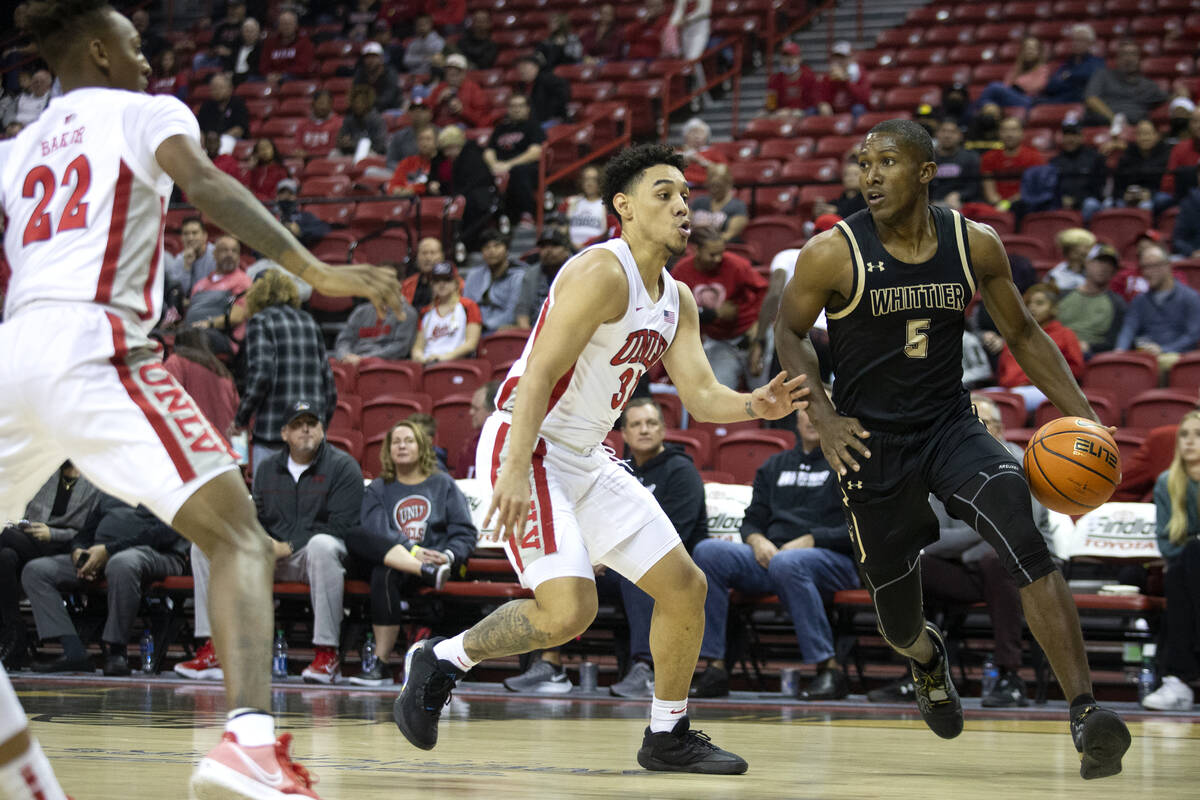 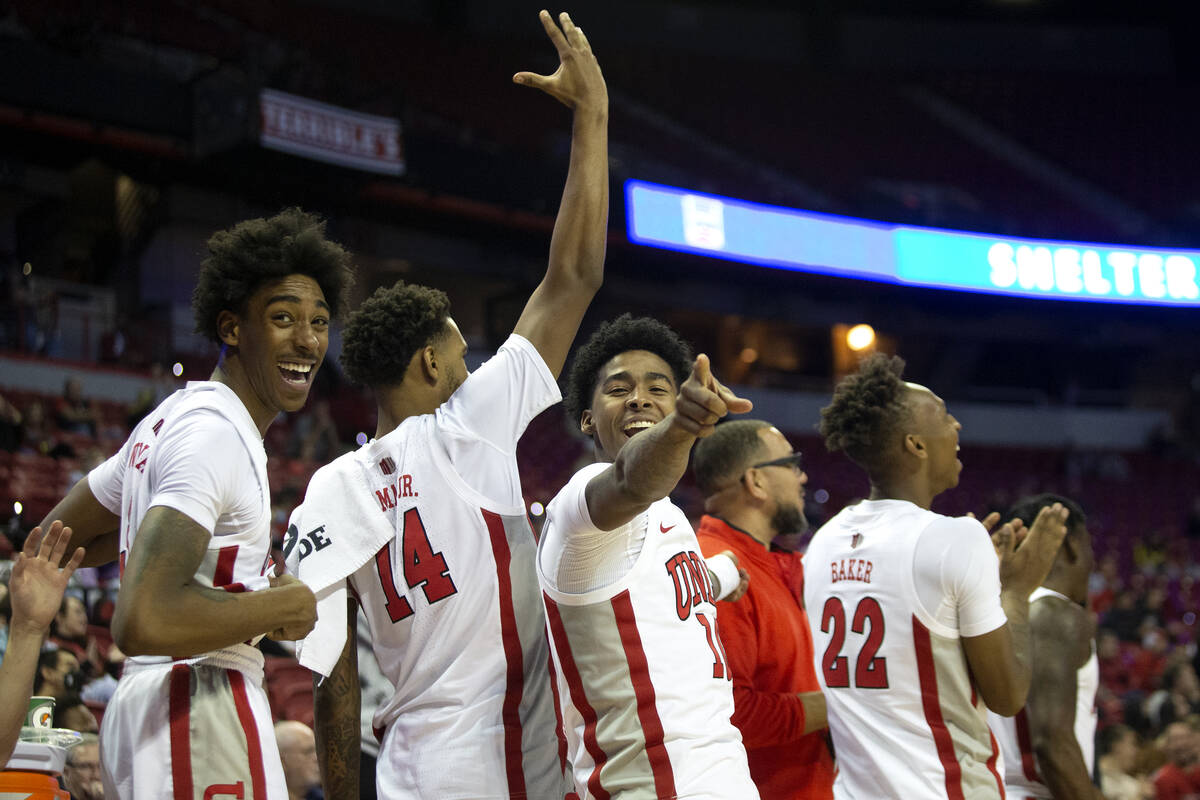 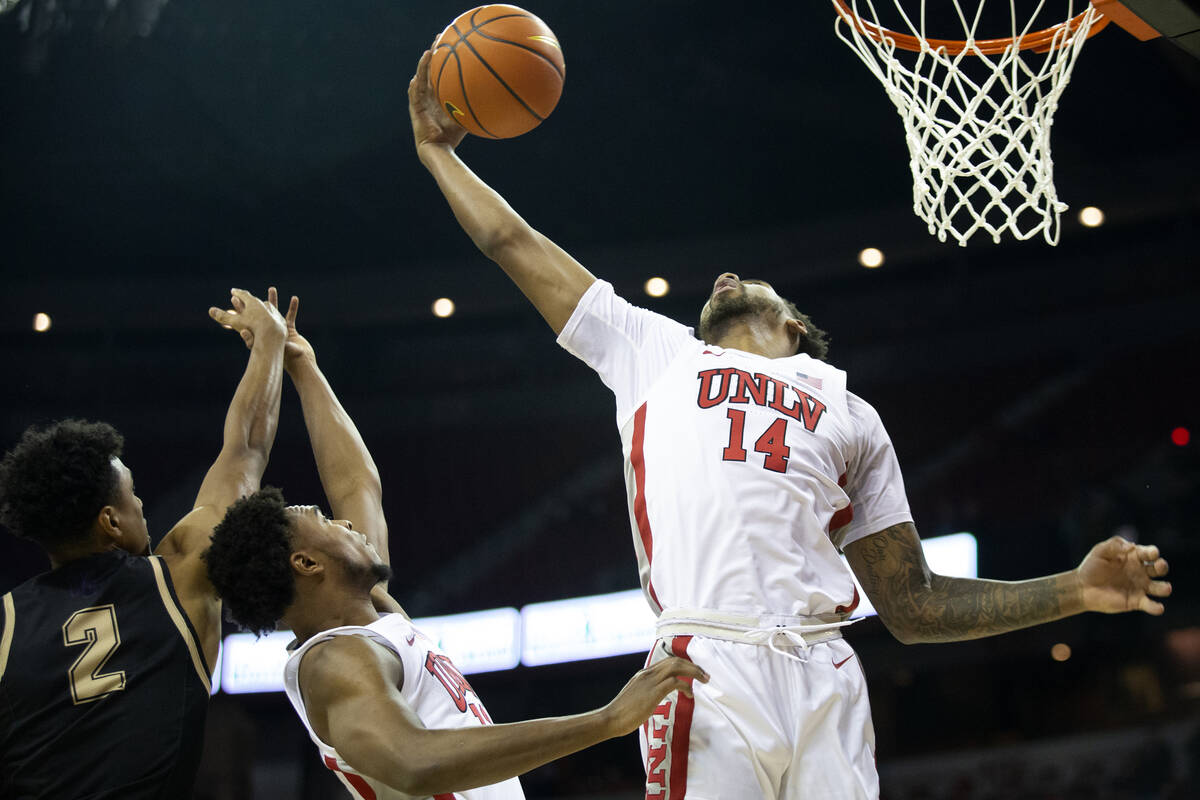 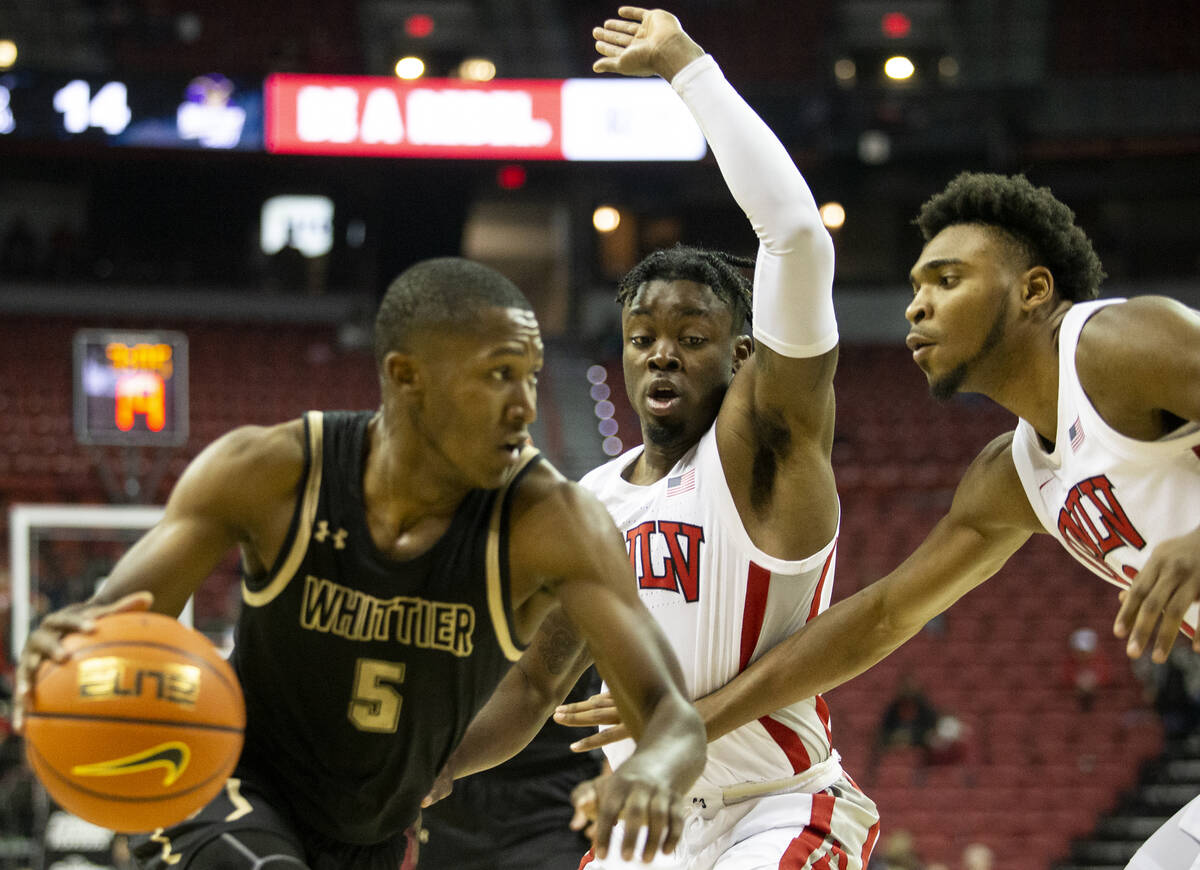 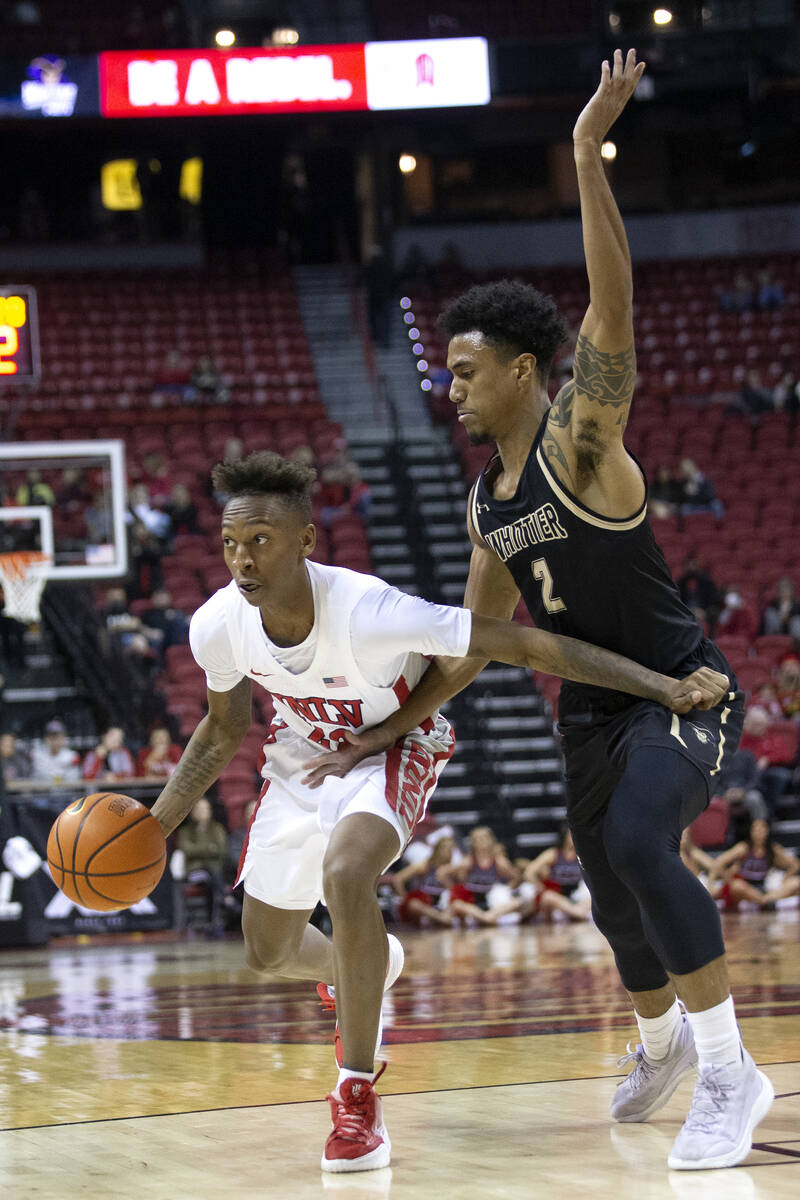 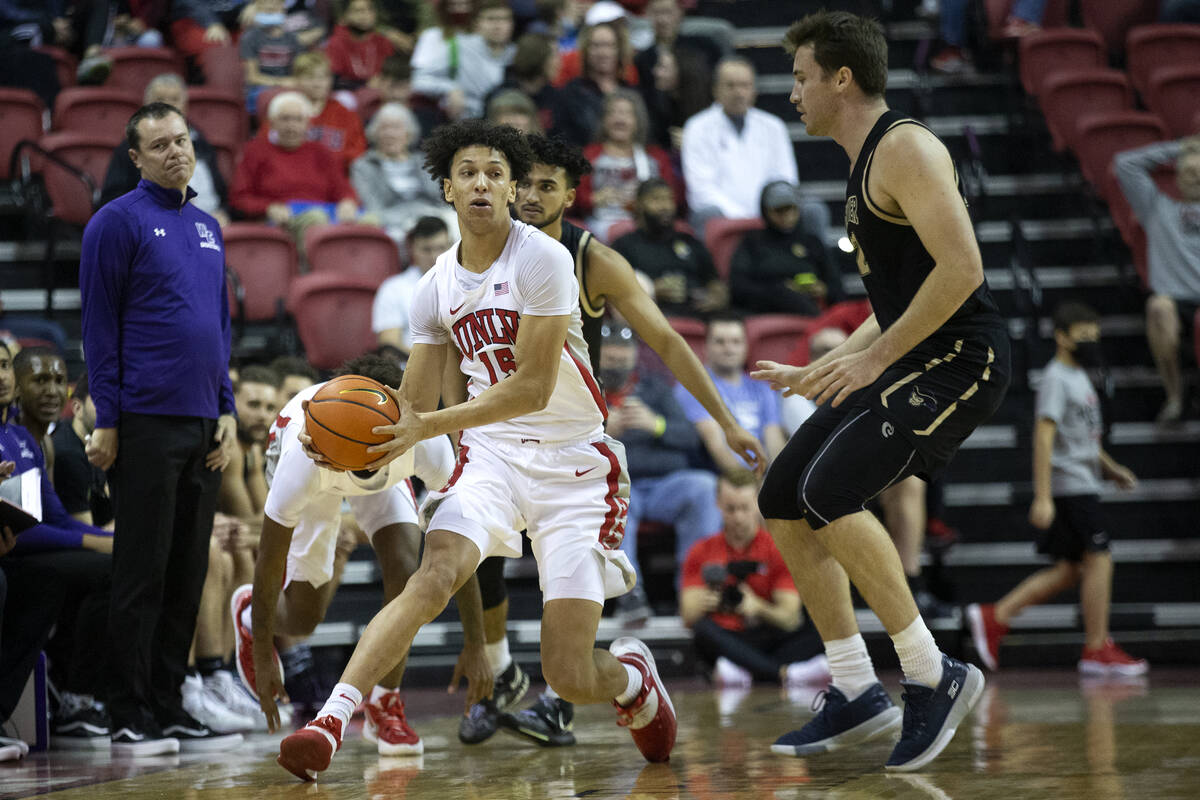 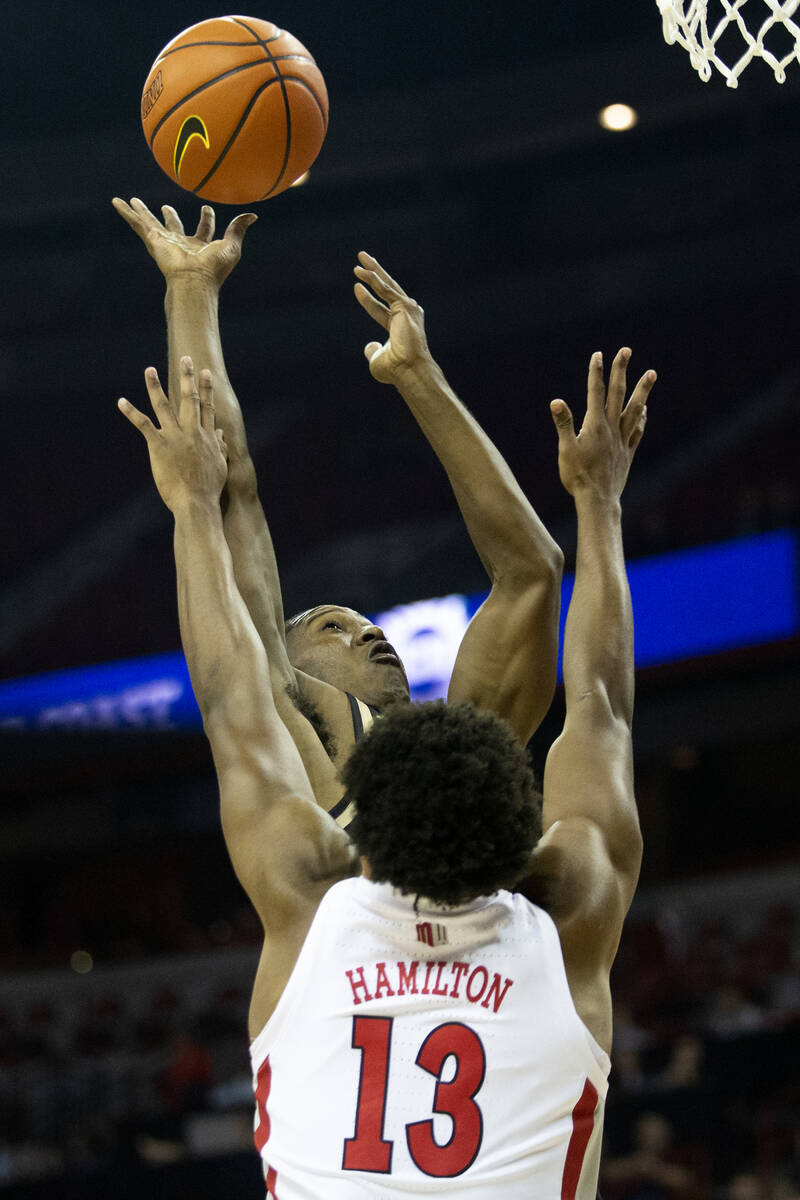 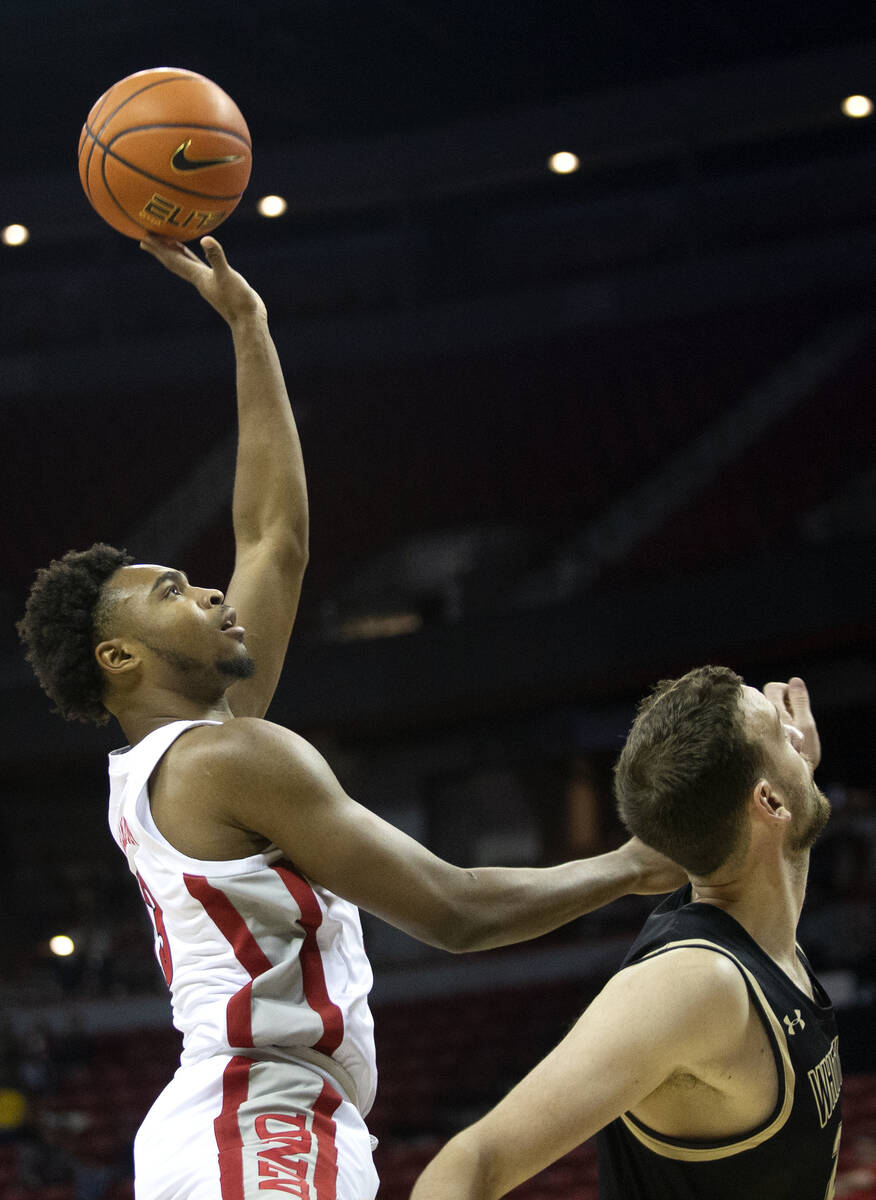 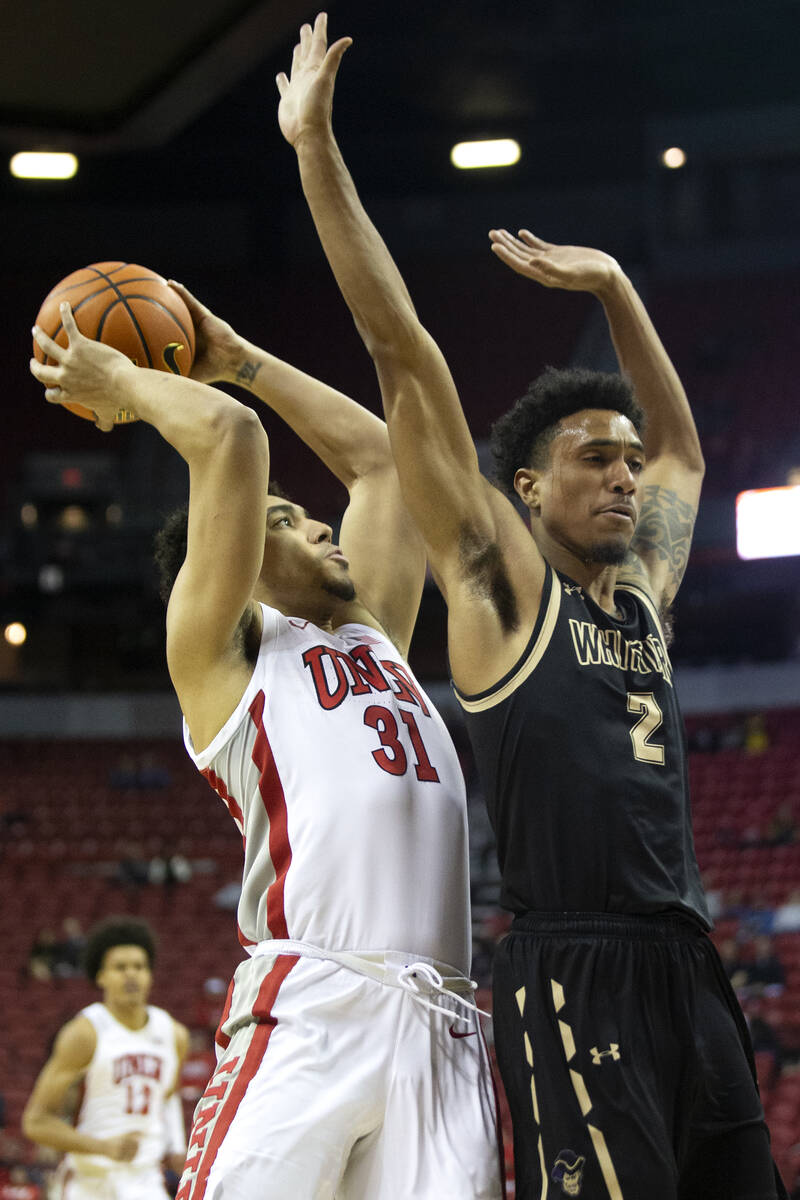 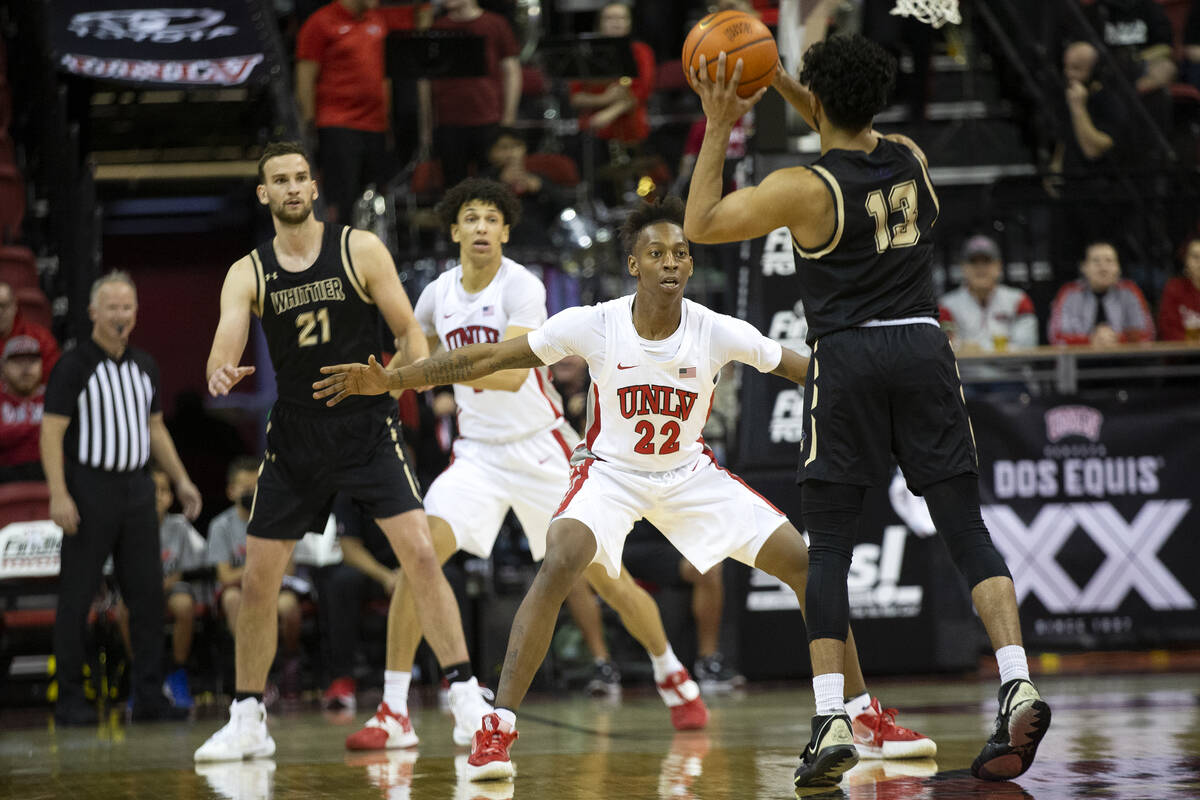 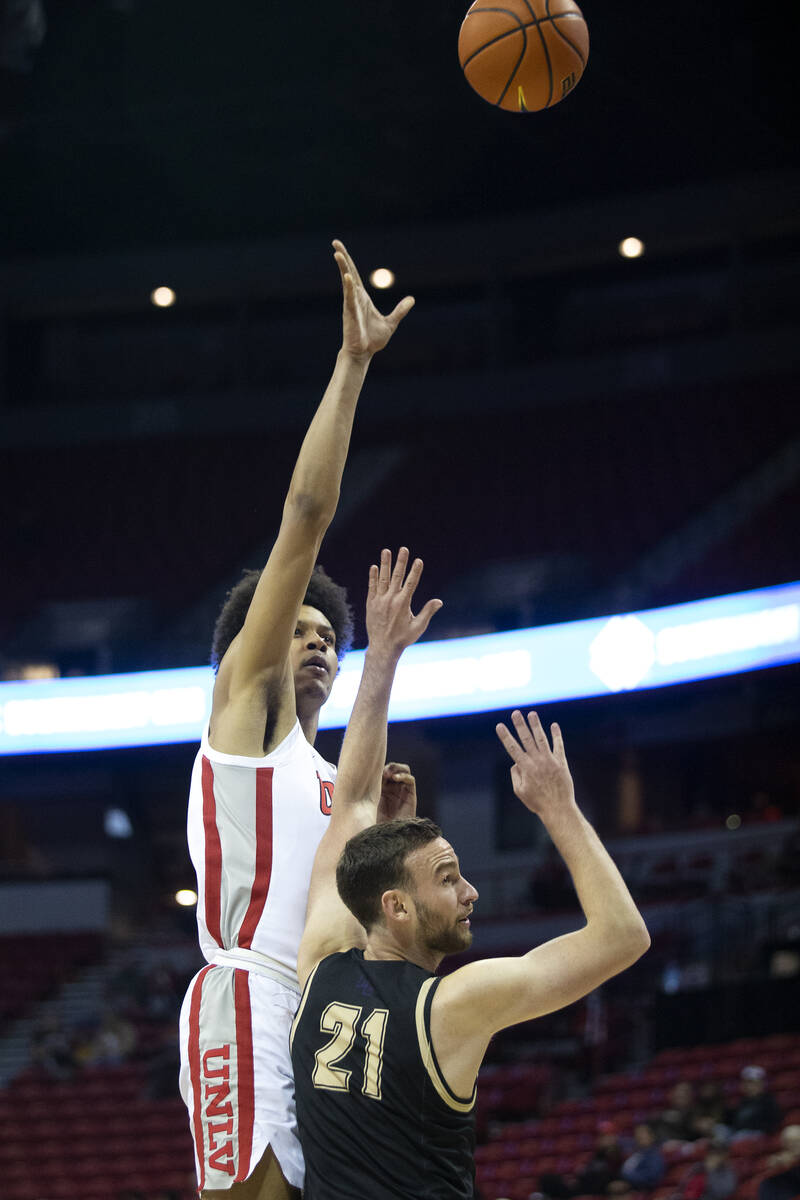 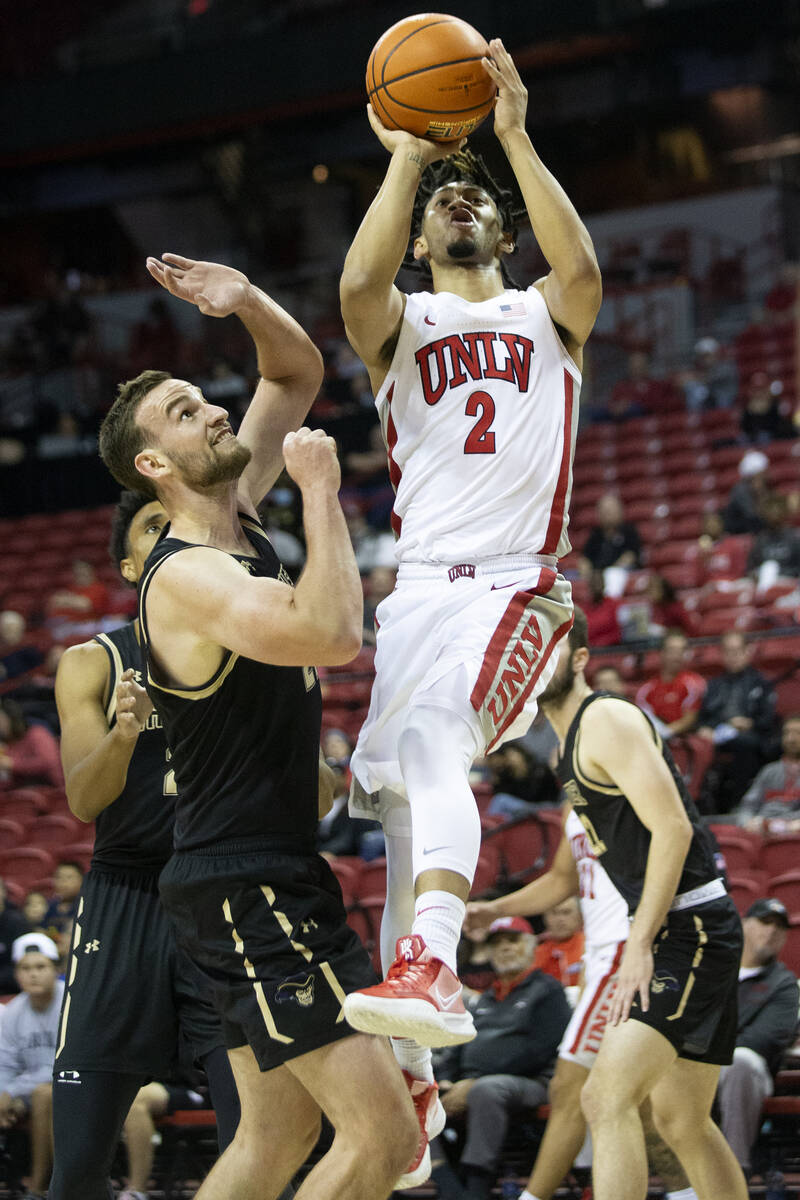 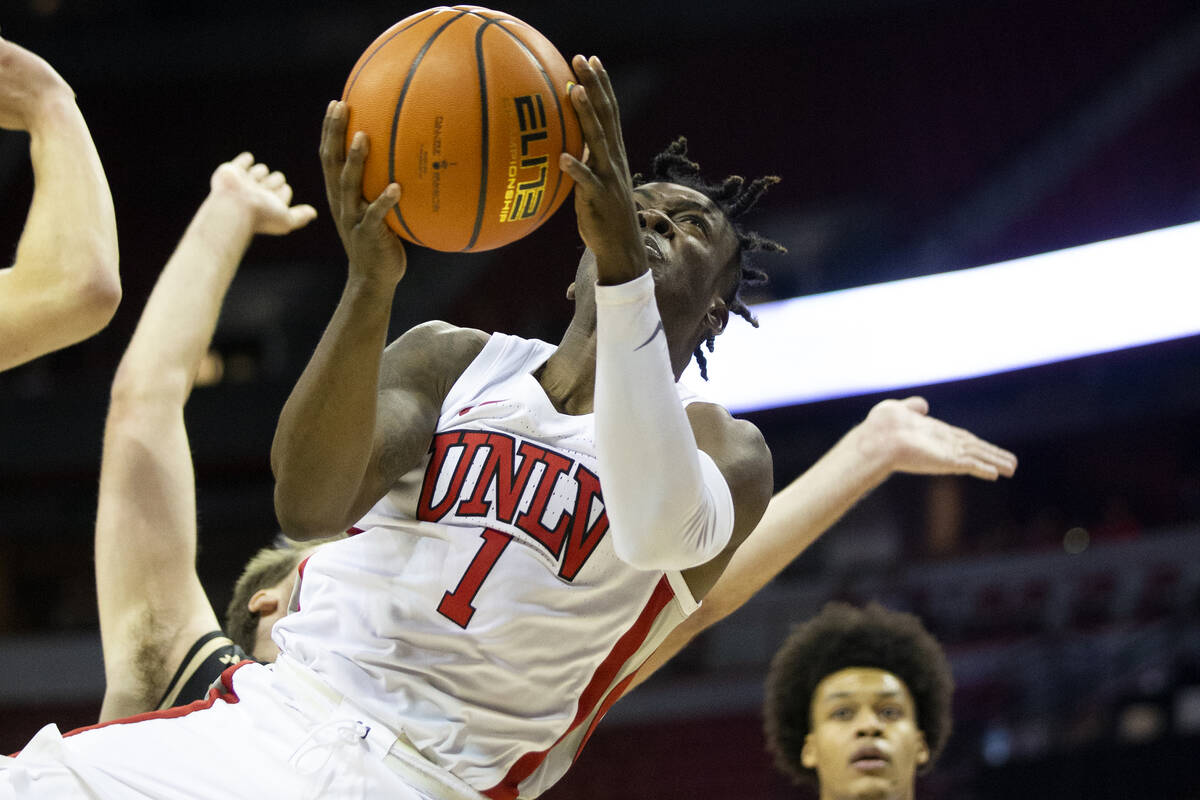 UNLV Rebels guard Michael Nuga (1) jumps to shoot against the Whittier College Poets during the second half of an NCAA college basketball game at the Thomas & Mack Center on Wednesday, Nov. 24, 2021, in Las Vegas. (Ellen Schmidt/Las Vegas Review-Journal) @ellenschmidttt 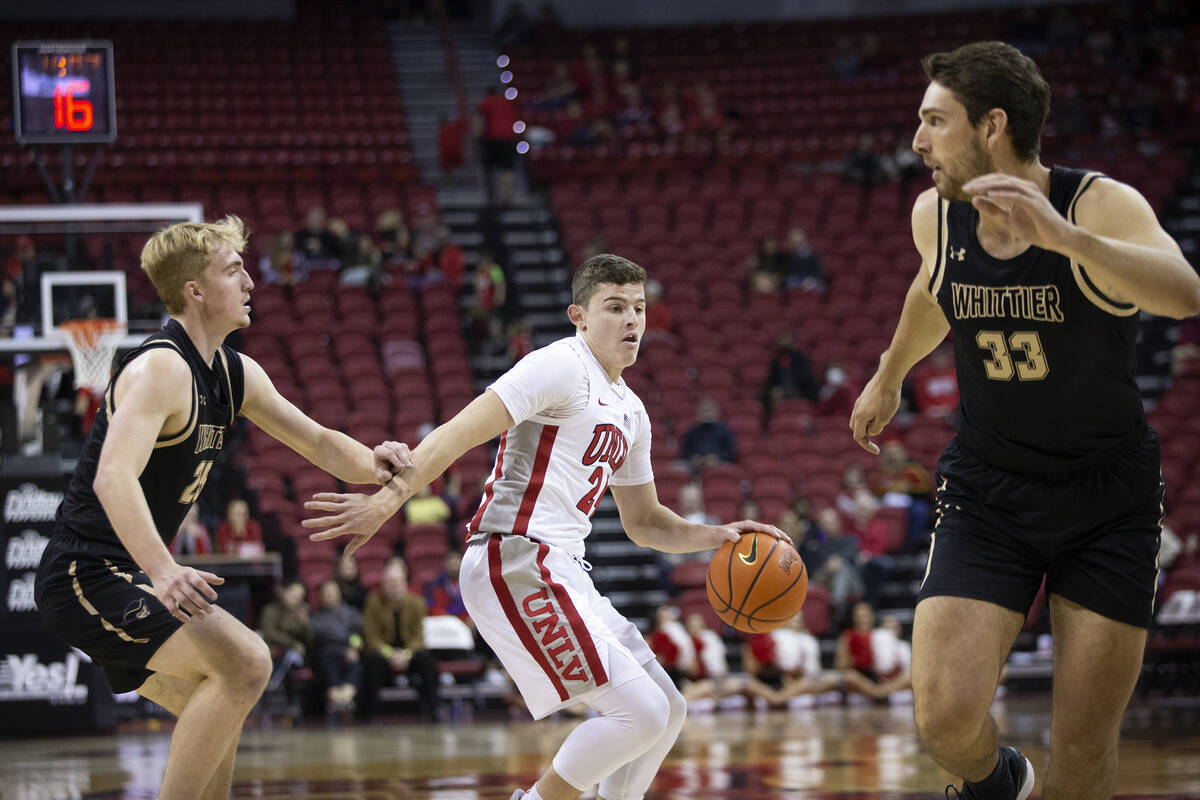 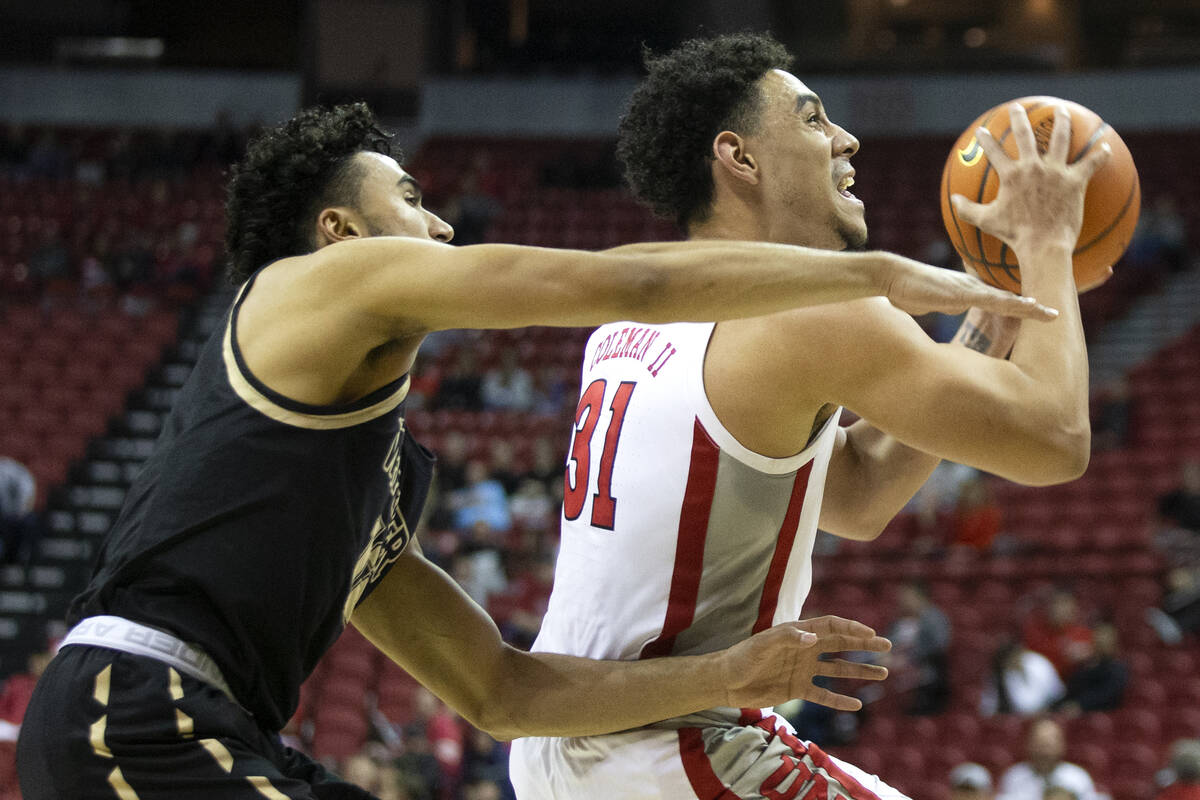 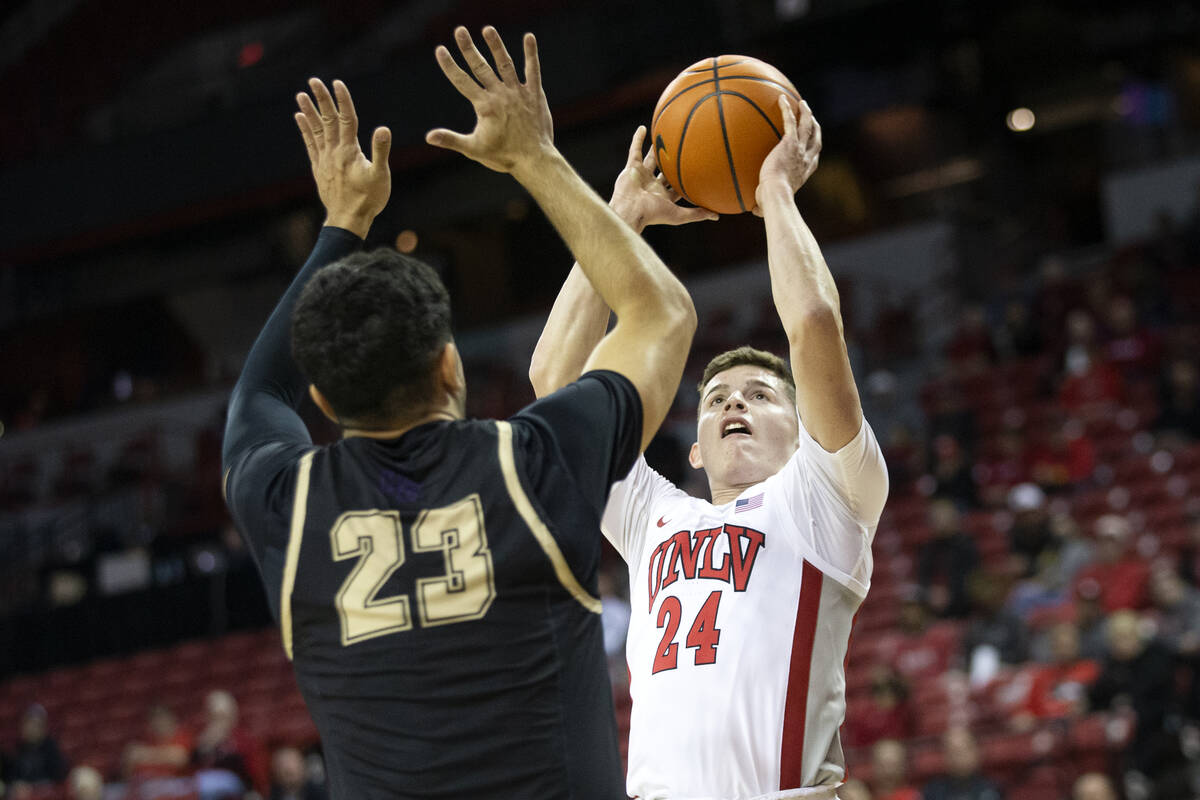 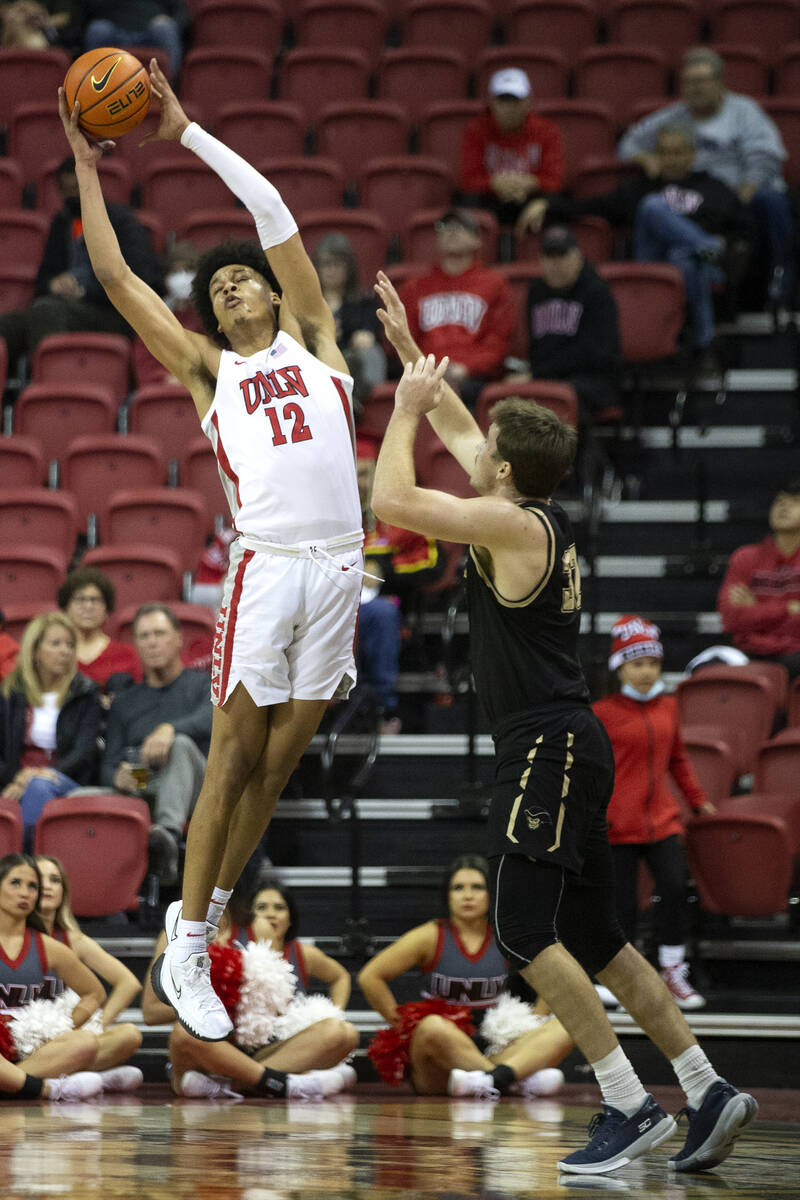 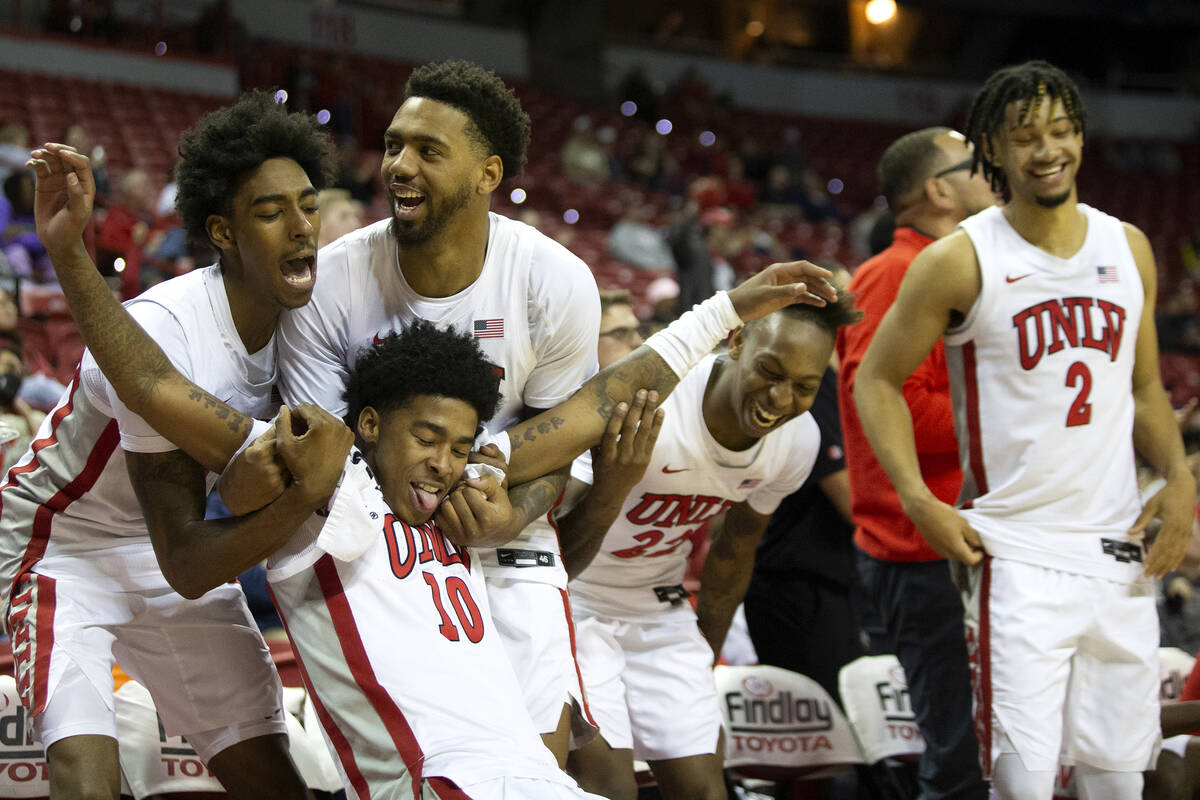 UNLV basketball coach Kevin Kruger didn’t plan to sit the starting lineup Wednesday night against Whittier College during the first media timeout at Thomas & Mack Center. But its energy and effort warranted a platoon of substitutions with No. 2 UCLA looming this weekend.

“They’ve got to know that their approach wasn’t what we were looking for,” Kruger said. “We’re still going to start the same five Saturday against UCLA.”

But Wednesday night belonged to the bench.

The Rebels coasted to a 101-45 victory over the Division-III Poets and snapped the two-game skid they sustained at the Roman Main Event at T-Mobile Arena. Reserves combined to score 61 points and played 130 of the 200 available minutes. Walk-ons Trey Hurlburt and Cameron Burist played for the first time this season, garnering cheers from their teammates and the smatterings of fans scattered throughout the arena.

“That second group went out there and changed everything,” said Kruger, who announced that his wife, Allison, gave birth Monday to their second daughter. “They were active and talking out there. They were excited.”

UNLV’s starters slogged through the first four minutes, resulting in a 9-8 lead and wholesale changes for Kruger and his staff. The second unit played with more defensive tenacity, sparking a 44-8 run that spanned the remainder of the first half and triggered the rout.

The Rebels (4-2) unveiled a couple zone defenses for the first time this season, experimenting with a three-quarter court 2-1-2 and a halfcourt 1-3-1. Kruger said they’ve hardly repped the coverages in practice, but was pleased with how his players communicated on the fly against the Poets (4-1).

“We just wanted to play well as a team. We had two tough losses last weekend,” Coleman said. “So we just wanted to come back … get some rhythm. We’ve got the No. 2 team coming in here this weekend.”

The Bruins return the bulk of a roster that played in the Final Four last season. They endured an 83-63 loss to No. 1 Gonzaga on Tuesday at T-Mobile Arena.

“They’re kind of where we want to be in terms of when people talk about our program,” Kruger said. “We have another opportunity hear to grab some attention. 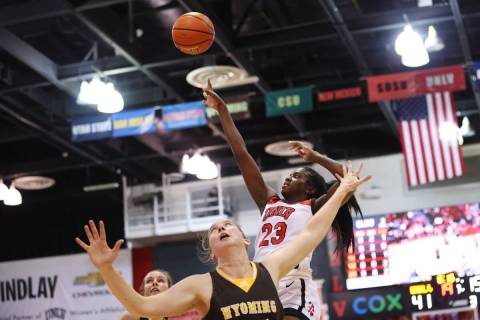 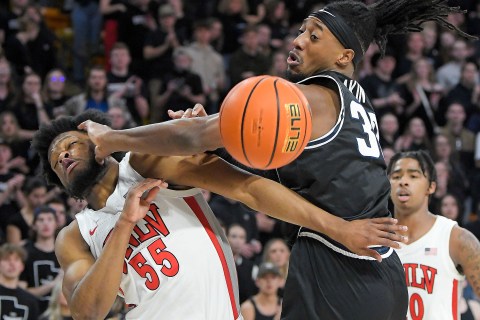 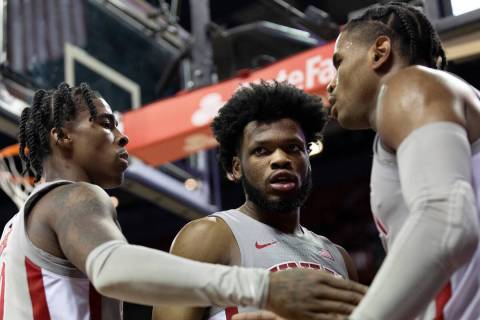 UNLV’s defense has struggled since Mountain West play began, but the Rebels may be on the verge of reinforcments