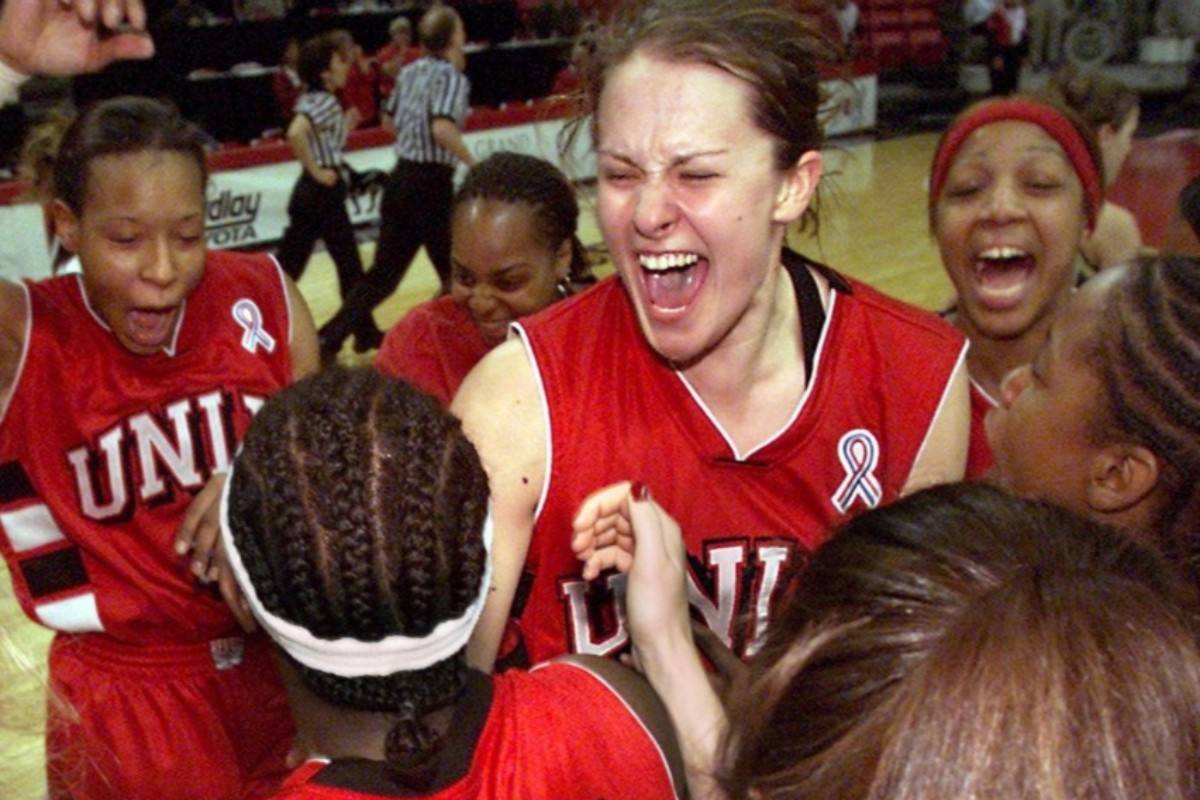 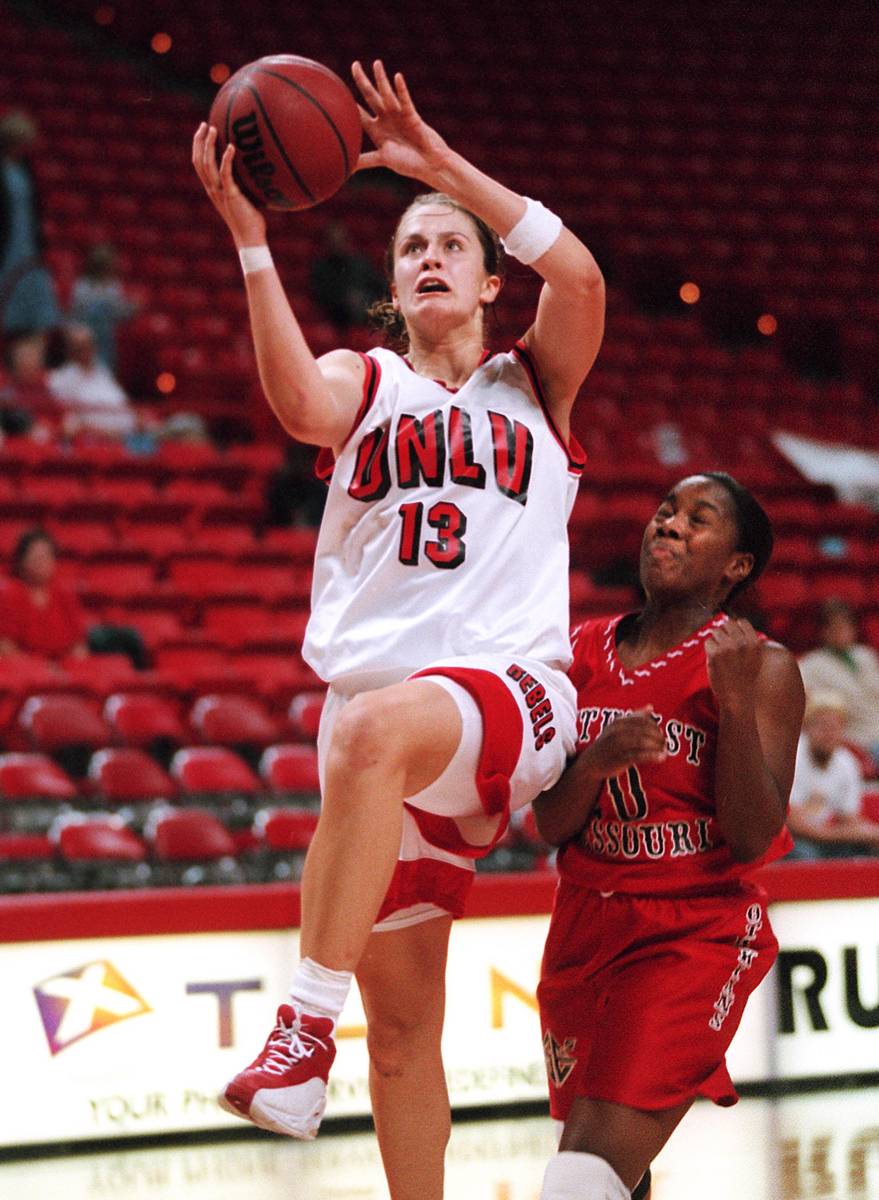 Lady Rebel Linda Frohlich (13) drive for two past SMS's Moneik Campbell (10) on a fast break during the 1st half at the T&M Center Sunday afternoon. (Las Vegas Review-Journal file) 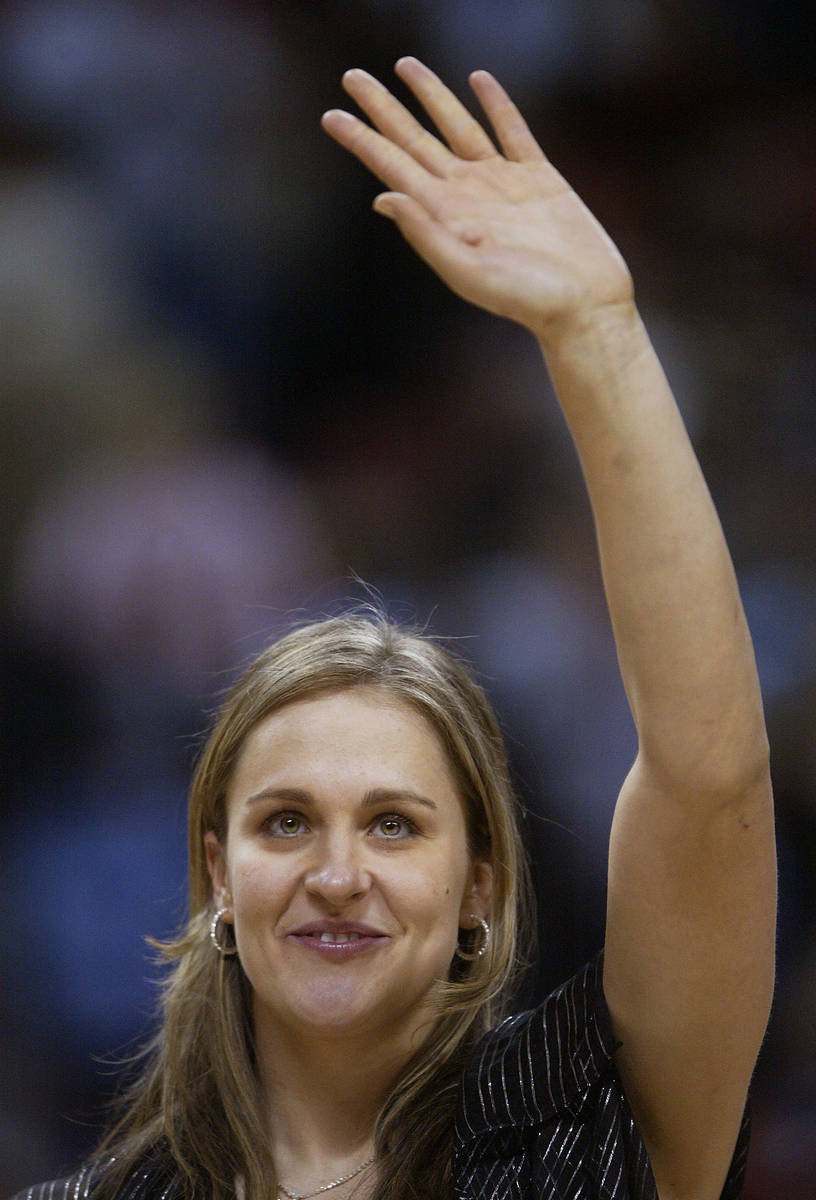 Those driving near UNLV in early 2002 could look up and see a billboard touting Linda Frohlich as an All-American candidate.

Especially with the men’s team going through a transition after a coaching change, Frohlich, a German native, was the city’s basketball star at the time, putting up numbers that even those on the Runnin’ Rebels never matched.

She ended her Lady Rebels career in 2002 as the leading scorer in school history for men and women with 2,355 points, a record that still stands. Frohlich also became the first UNLV woman to reach 2,000 career points and 1,000 career rebounds.

“It’s surreal at times,” she said. “I forget sometimes because I’m like, ‘Oh, that happened yesterday.’ But it has been 18 years.”

Frohlich, 40, has remained committed to athletics. She and her husband of nearly 15 years, Andrew Todd, opened Frohlich Sports Academy three years ago in Rancho Cucamonga, California.

The academy focuses mostly on developing young athletes and even opened a charter school last year as part of its mission. It’s also open for adult leagues. The Los Angeles Clippers’ G-League team has trained there the past two years.

Former NBA player Darren Collison and aspiring NBA player LaMelo Ball are among those who have worked out at the facility.

It’s not just geared to basketball, however. Three batting cages also are on site, as is a weight room, turf area and recovery center.

“I like to call it a mini-Olympic center,” Frohlich said. “It’s accessible for every person. It was built for what I believe it takes to become a great player.”

She and Todd hope to eventually open a center in Las Vegas. “Our heart is still in Vegas,” Frohlich said. “We have still a lot of friends.”

With the coronavirus pandemic having largely shut down operations, Frohlich also has been thrust into role of home-school teacher to her three children, who range in age from 4 to 7.

They’re too young to understand the impact that Frohlich had at UNLV and in Germany, where she was called “Dirk in a skirt” after fellow countryman Dirk Nowitzki.

Frohlich ended her UNLV career with averages of 21.2 points and 10.1 rebounds and, in 2002, led the Lady Rebels to what is still their most recent NCAA Tournament appearance. She received All-America honors three times, was named Mountain West Player of the Year each of her final three seasons and was first-team all-conference four times.

The New York Liberty drafted Frohlich in the second round in 2002, and she played four seasons in the WNBA but made a much bigger mark in Europe. She played nine seasons overseas, leading the Italian league in 2005 with 18.3 points per game, winning the FIBA Euro Cup the following season with Spartak Moscow and helping her team to the Turkish championship in 2007. 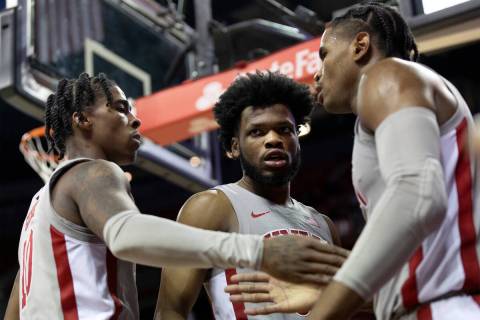 Fifth-year guard EJ Harkless tied his career scoring night to lead UNLV back into the win column, beating a battered Wyoming team on the road Wednesday.