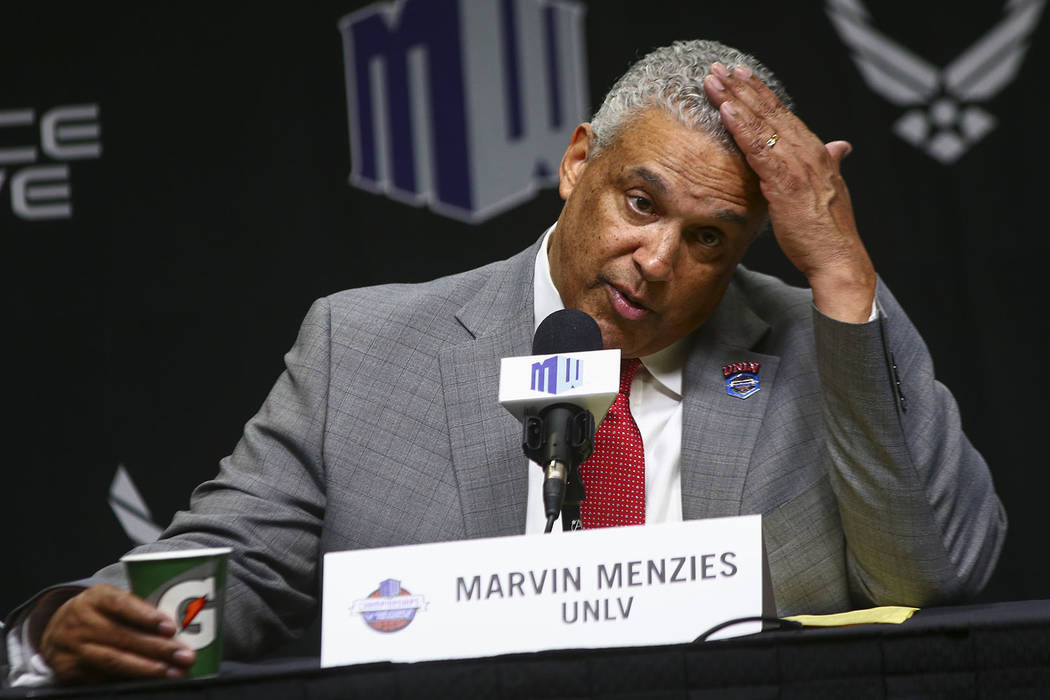 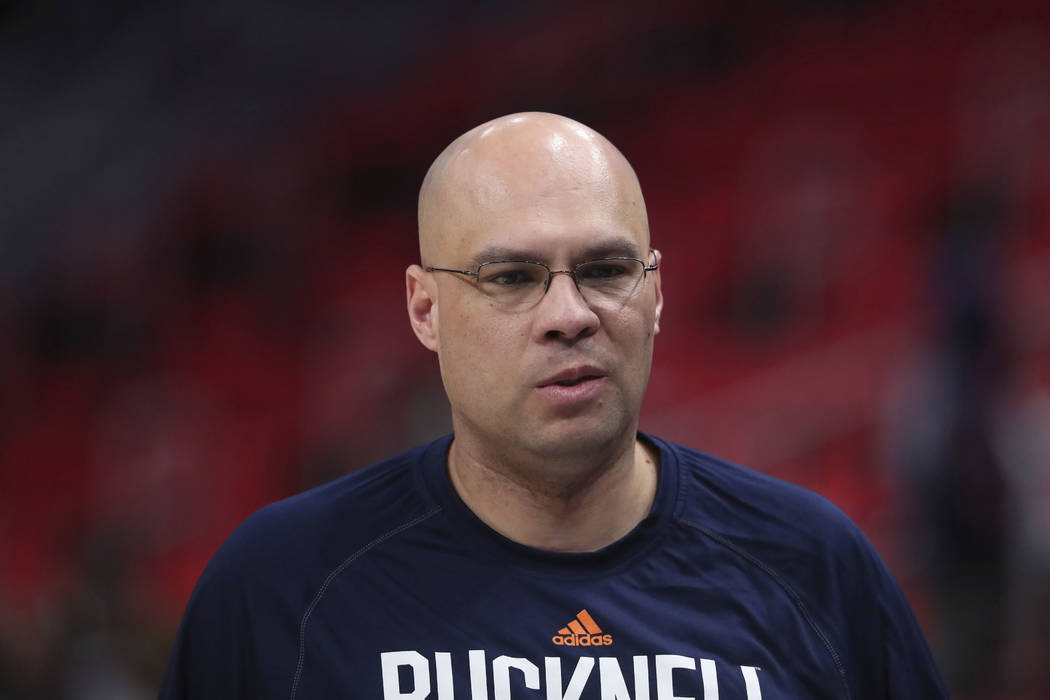 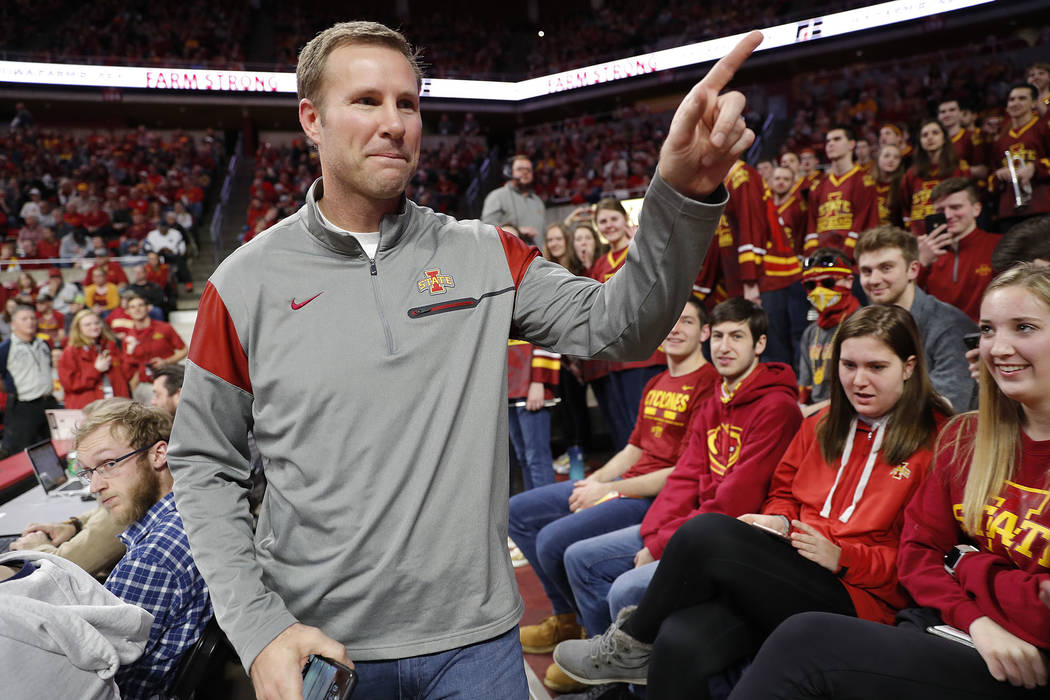 Former Iowa State head coach Fred Hoiberg points to fans as he walks by during the first half of the Iowa State NCAA college basketball game against Baylor, Tuesday, Feb. 19, 2019, in Ames, Iowa. (AP Photo/Matthew Putney) 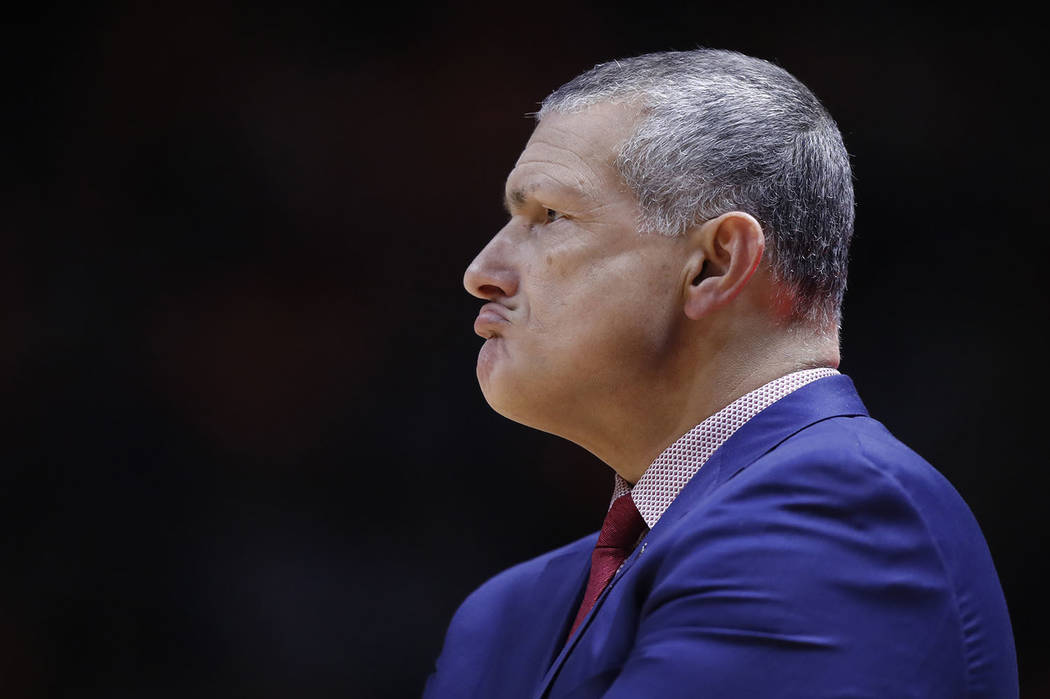 South Carolina head coach Frank Martin looks on during the second half of an NCAA college basketball game against the Tennessee Wednesday, Feb. 13, 2019, in Knoxville, Tenn. (AP photo/Wade Payne) 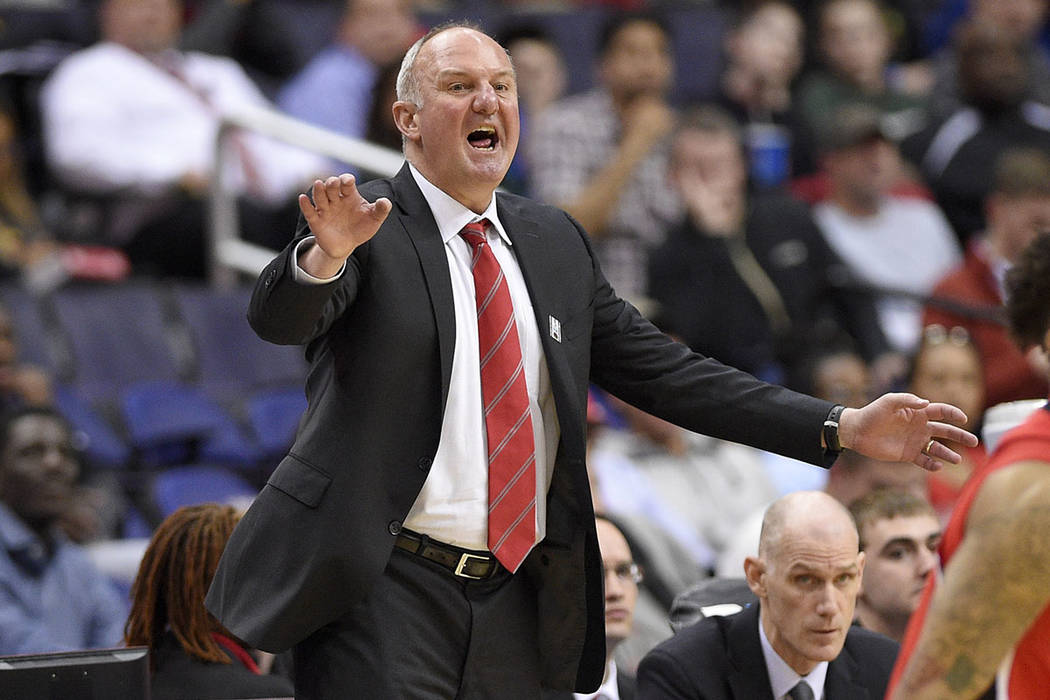 In this March 8, 2017, file photo, Ohio State head coach Thad Matta gestures during the second half of an NCAA college basketball game in the Big Ten tournament against Rutgers, in Washington. (AP Photo/Nick Wass, File) 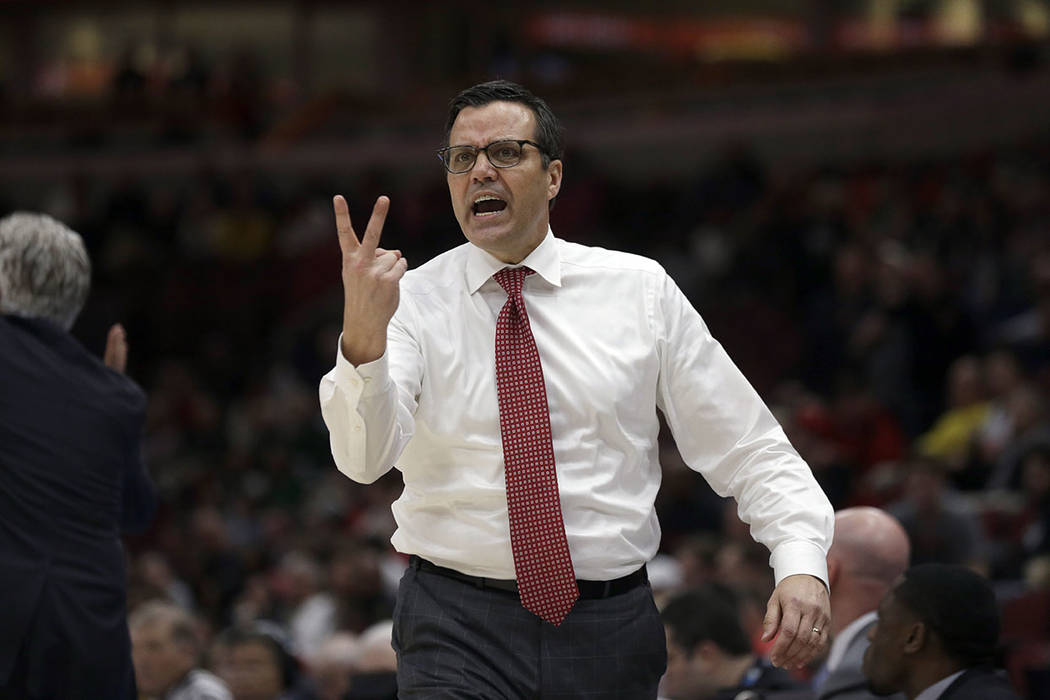 Nebraska head coach Tim Miles argues a call during the second half of an NCAA college basketball game against the Maryland in the second round of the Big Ten Conference tournament, Thursday, March 14, 2019, in Chicago. (AP Photo/Kiichiro Sato) 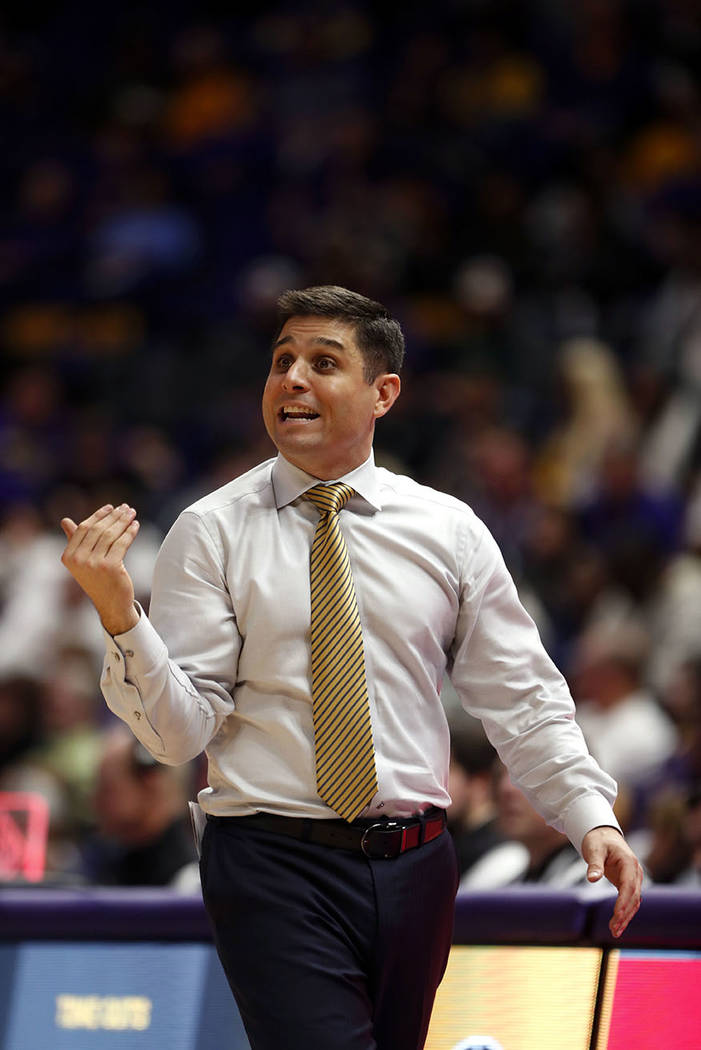 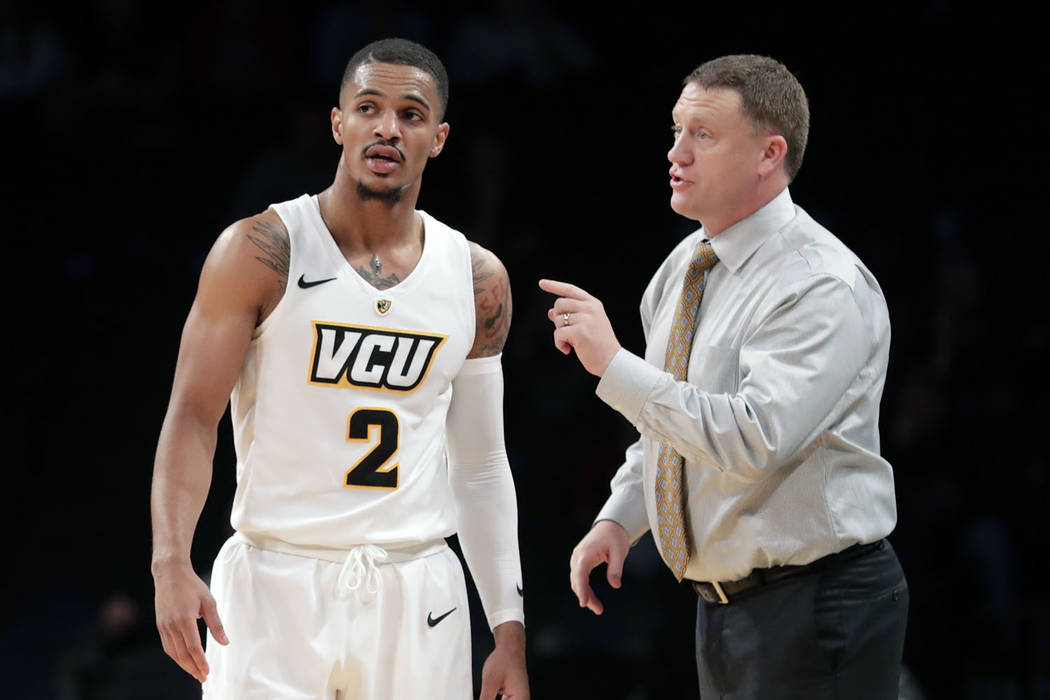 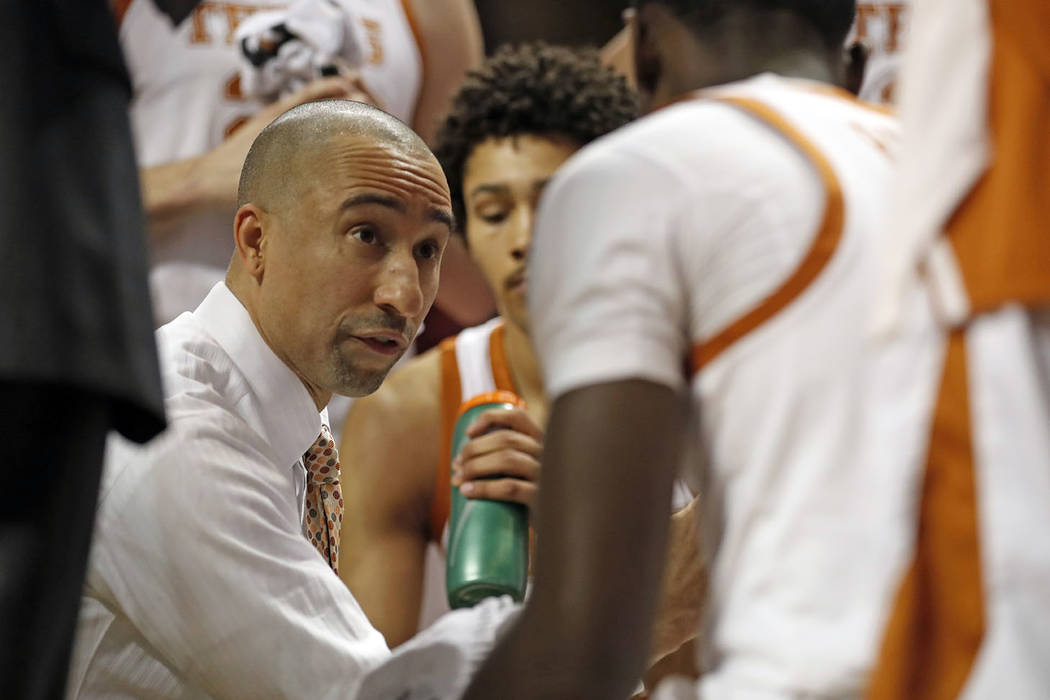 Texas coach Shaka Smart talks to his players on the bench during the first half of an NCAA college basketball game against Texas Tech, Monday, March 4, 2019, in Lubbock, Texas. (AP Photo/Brad Tollefson) 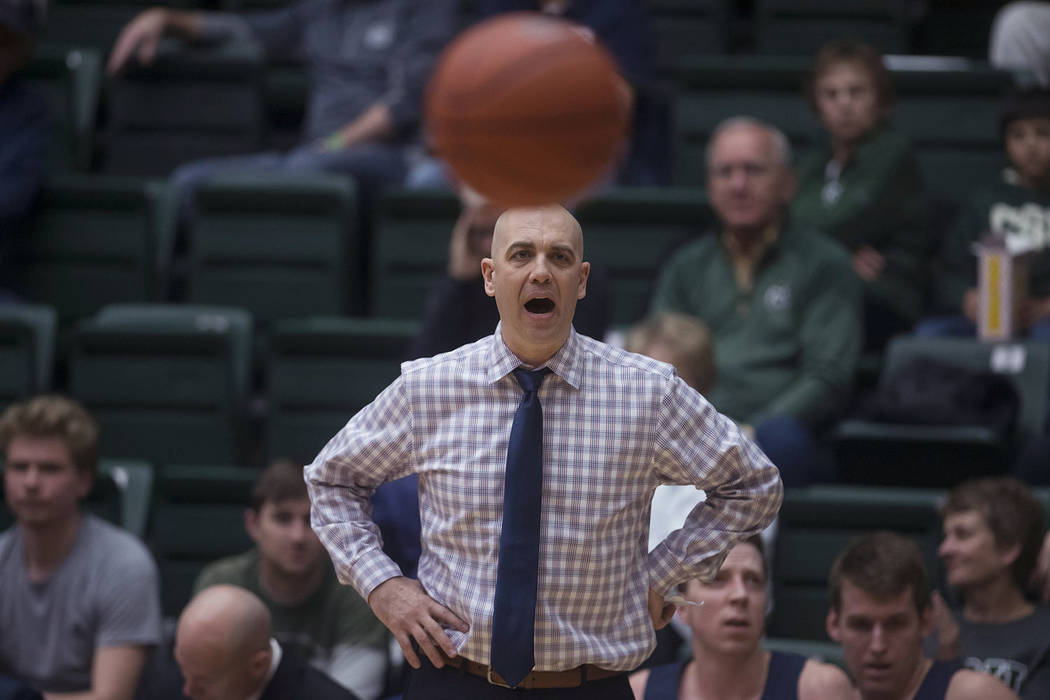 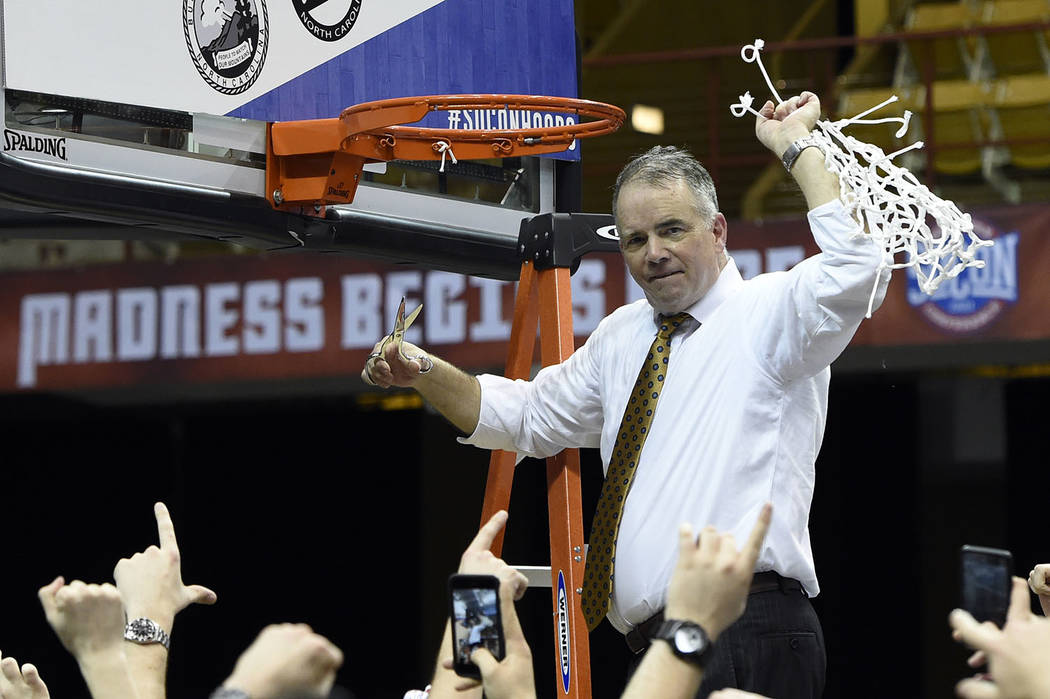 These coaches could be considered for the UNLV men’s basketball job:

Nathan Davis, Bucknell — Made the NCAA Tournament the past two seasons. Won Patriot League Coach of the Year in back-to-back seasons.

Fred Hoiberg — Went 115-56 in five seasons at Iowa State before taking over the Chicago Bulls, who fired him in December. Is the leading candidate at Nebraska.

Frank Martin — The South Carolina coach long has been enamored with UNLV and Las Vegas. He participates in Coaches vs. Cancer events in Las Vegas every year.

Tim Miles — Job is on the line at Nebraska. Coached in the Mountain West at Colorado State, leading the Rams to the 2012 NCAA Tournament.

Wes Miller, UNC Greensboro — Led Greensboro last season to its first NCAA Tournament since 2001, and at 28-6 this season is a bubble team.

Mike Rhoades, Virginia Commonwealth — Named Atlantic 10 Conference Coach of the Year and is 25-7.

Shaka Smart — Questions about his job status at Texas have been raised, but a story in the Austin American-Statesman said he will return for a fifth season. If he doesn’t, Smart is owed a $12.9 million buyout. He took Virginia Commonwealth to five NCAA Tournaments, including the 2011 Final Four.

Craig Smith, Utah State — Mountain West Coach of the Year after taking a team picked ninth to a share of the regular-season conference championship.

Mike Young, Wofford — Three-time Southern Conference Coach of the Year who is taking the program to the NCAA Tournament for the fifth time since 2010.