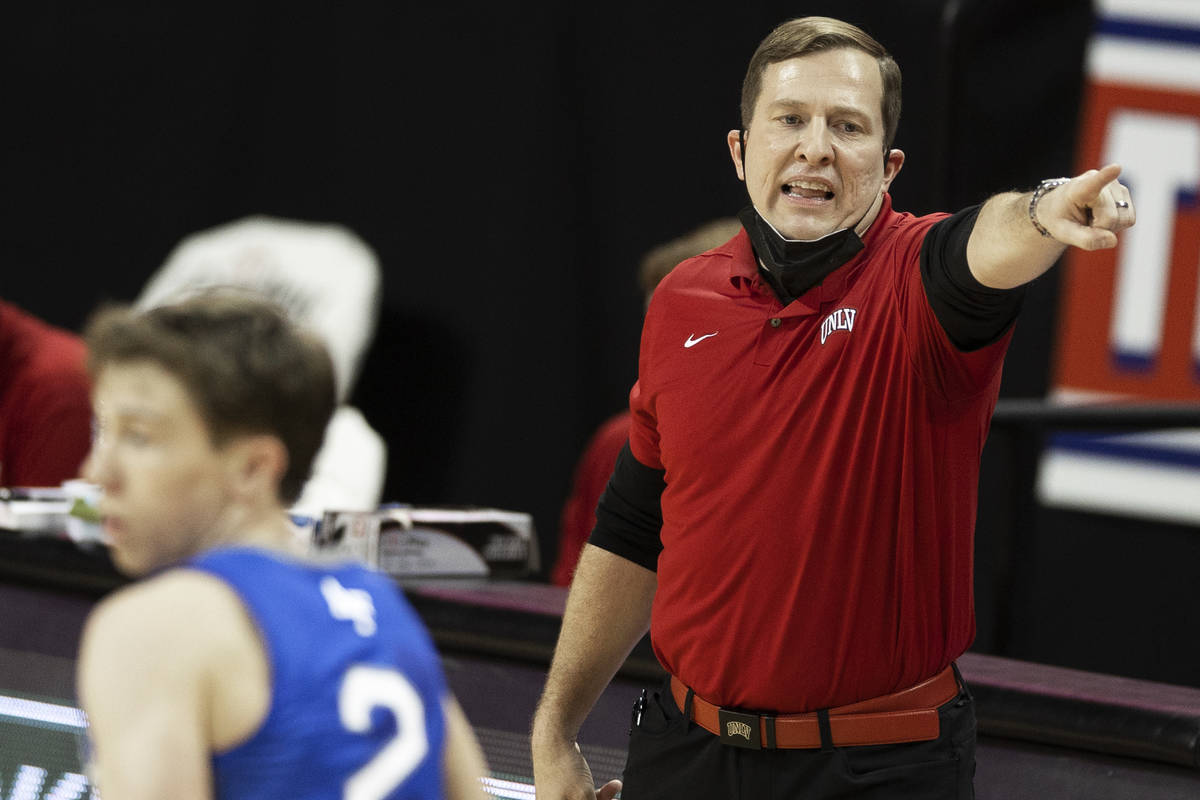 It didn’t seem to matter whether Wyoming shot from inside or out Saturday night against UNLV; it was going in.

The Cowboys shot 55.1 percent from the floor, including 10-for-20 from the 3-point line, and led almost the entire way in a 80-69 win in the regular-season finale for both teams at Arena Auditorium in Laramie, Wyoming.

“We knew with how Wyoming spaced the floor offensively we were going to have to do a great job of guarding the dribble one-on-one, guarding the post one-on-one and then contesting the 3-point line,” UNLV coach T.J. Otzelberger said. “That’s what we emphasized the last three days, and we didn’t do a very good job of it tonight. They had everything going from the start.”

UNLV shot 56.5 percent in the first half, but it trailed by nine at intermission after Wyoming shot 56.7 percent and took nine more shots because of nine UNLV turnovers and grabbed a 4-0 advantage on the offensive boards.

“(The offensive fouls) definitely hurt, and it’s guys trying to overdribble the basketball or get going a little fast,” Otzelberger said. “We had a couple on dribble handoff or a screen exchange that are tough, and you can’t give up those possessions. Wyoming scored the ball well, and for the most part, we did, too. They were able to get more stops and keep us off the free-throw line and shoot the 3 better. They were better in every area.”

Bryce Hamilton led UNLV with 17 points, Edoardo del Cadia added 13 and David Jenkins was 3-for-10 for 10 points before fouling out.

1. Problems on the boards

UNLV coach T.J. Otzelberger thought coming in his team was more physical and that it had the edge in the lane and on the boards.

The Rebels outscored Wyoming 40-28 in the lane, but the Cowboys, who are ninth in the Mountain West in rebounding margin, had a 29-26 advantage on the boards, including 9-5 offensively.

UNLV also continued its trend of fouling too much, and Wyoming shot 27 free throws to 15 for the Rebels.

Wyoming led by as many as 21 in the second half, and the Rebels were forced to try to come back two at a time.

They were 24-for-37 from 2-point range but made only three of their 13 3-pointers. The Rebels made a late run but never got closer than 10 points.

UNLV hoped to grab some momentum going into the tournament, but it closed the regular season losing three of its last four games.

A previous version of this story misidentified the No. 9 seed for the upcoming Mountain West tournament.