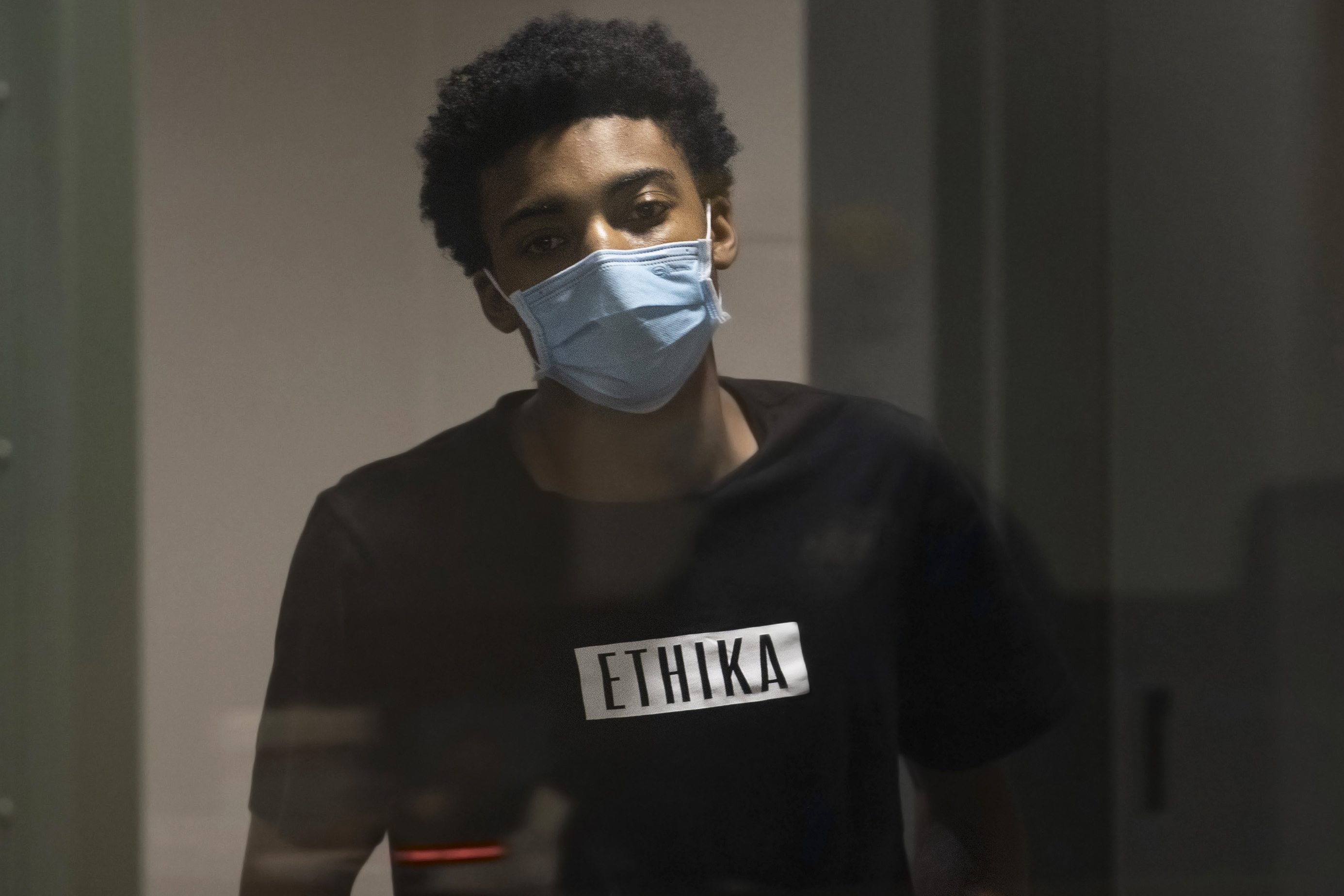 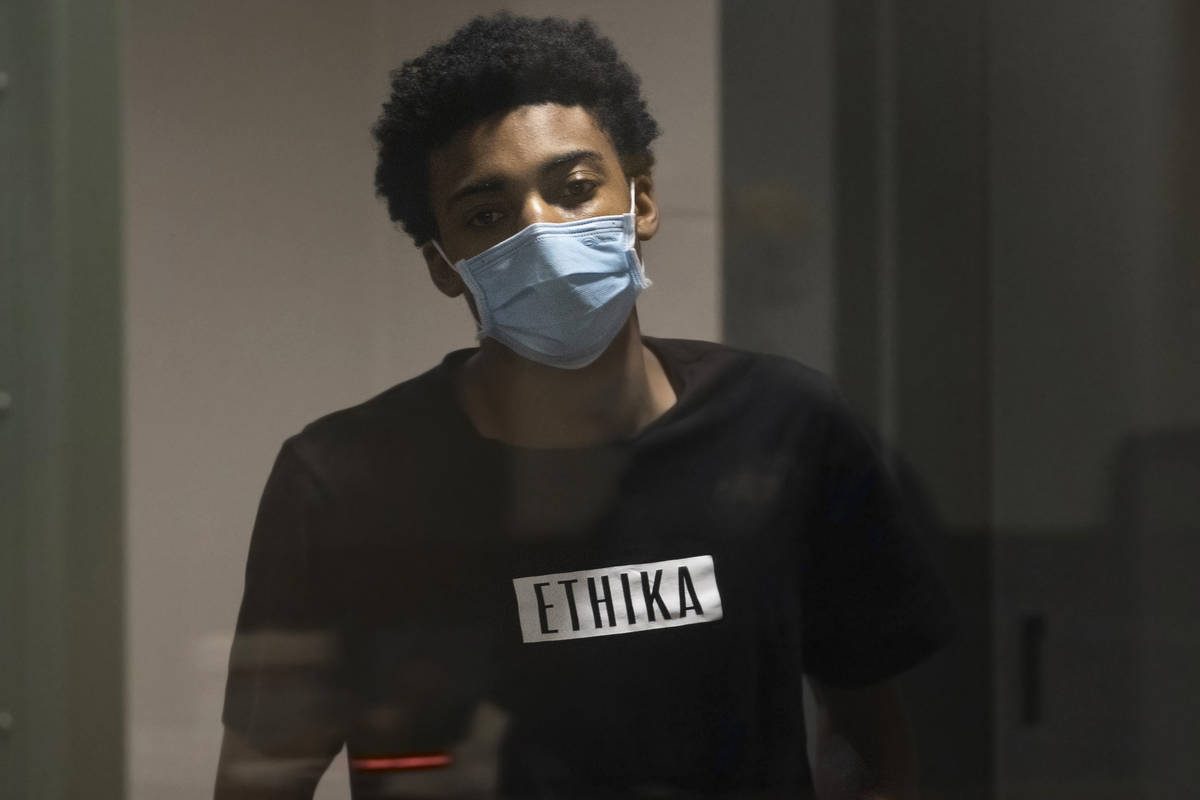 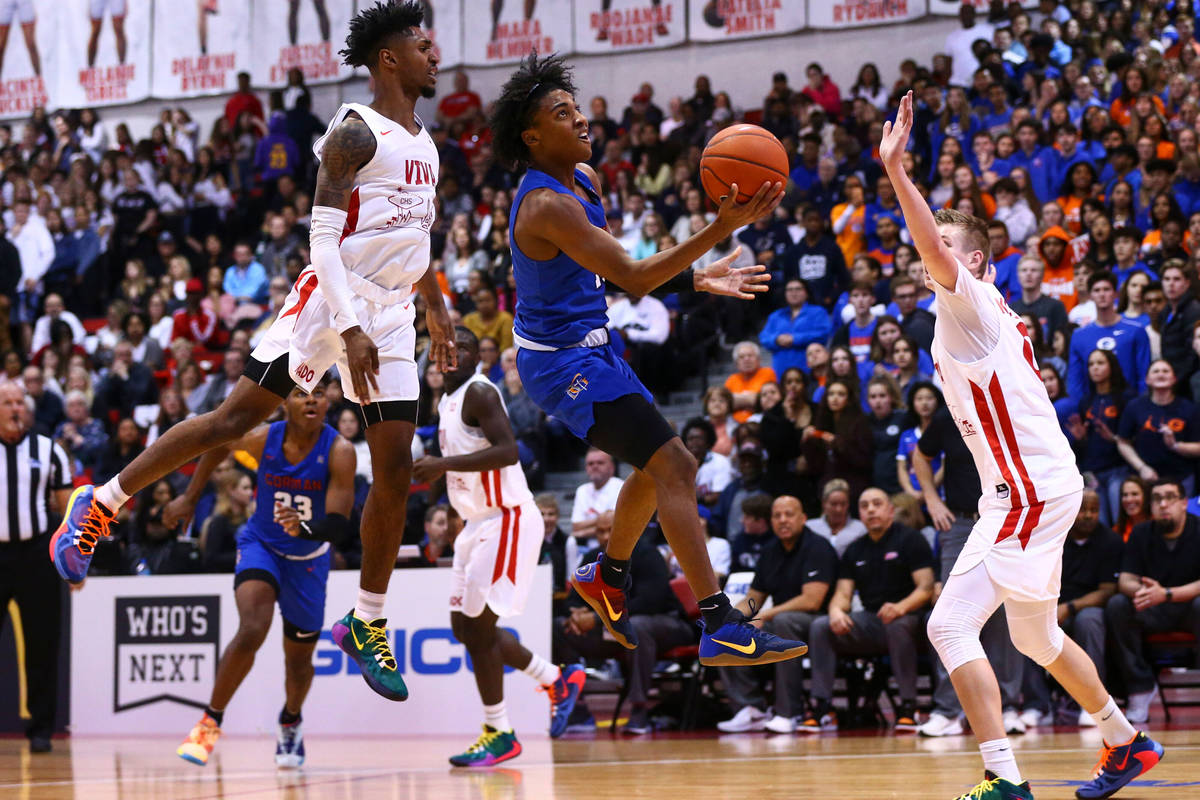 Bishop Gorman's Zaon Collins (10) goes to the basket between Coronado's Felix Reeves, left, and Jaxon Kohler during the second half of a basketball game at the Cox Pavilion in Las Vegas on Friday, Jan. 24, 2020. (Chase Stevens/Las Vegas Review-Journal) @csstevensphoto

Supposed to be on time to basketball practice on the afternoon of Dec. 30.

That’s what Las Vegas Metro Police contend in an arrest report that Collins did on that fateful afternoon. And those contentions are what prompted Clark County District Attorney Steve Wolfson to charge the 19-year-old basketball star with felony DUI resulting in death and reckless driving. The charges carry up to 20 years in prison.

Collins is due in Clark County District Court on Wednesday.

His attorneys, David Chesnoff and Richard Schonfeld, have released this statement: “Zaon maintains his innocence and is entitled to a fair and just court process in determining all of the circumstances of the accidenty. His case will be decided by the rule of law and not by media speculation or emotional reactions.”

The Review-Journal requested an interview with Collins through Chesnoff, who said Collins won’t be speaking publicly in the immediate future.

Chesnoff said he and Schonfeld are representing Collins pro bono — free of charge — because of their relationship with and affection for members of Collins’ family, the community he comes from and people that have followed his successes.

“Richard and I are very pleased to be helping him,” said Chesnoff, who, with Schonfeld, is considered one of the top defense lawyers in the country. “Everything that I was told about him in terms of his character has seemed to shine through.”

Gorman boys basketball coach Grant Rice declined to comment. As did Rebels coach T.J. Otzelberger, who announced the week after the crash that Collins would not join the program in 2021-22. Vegas Elite program director Brian Sitter said he’s been in contact with Collins, and that his former star has expressed remorse and contrition for his role in the crash.

“It’s terrible that somebody died, and he’s got to live with that for the rest of his life. He’s devastated about that,” Sitter said. “He’s trying to hold on to a (glimmer) of hope that his life isn’t ruined.”

Several people in the local basketball community say that like other talented athletes who have been given preferential treatment over the years, Collins was rarely held accountable for missteps that included frequent tardiness to basketball practices and a penchant for careless driving.

He began playing for Vegas Elite when he was 10 years old, dominating opponents locally and nationally with his uncanny, mature feel for the point guard position. His teams won at every level.

More often that not, he was the catalyst. As a natural throwback floor general he could control the pace of every game in which he played — dismantling the opposition with his mind and tenacity as much as his quick first step.

His peers admired him on and off the basketball court. Opposing coaches respected him. His coaches were thrilled to have him, knowing they’d have an intangible edge as long he wore their jersey.

Vegas Elite assistant program director and Gorman assistant Rich Thornton says Collins is the best player he’s ever coached. He was quiet and reserved, while still being a leader.

“It’s hard to put into words, but it was this definite charm, charisma that he had, where it’s like you can never be mad at the kid,” Sitter said. “He brought people together. You wanted to be around him. You wanted to hang out with him. Whatever that word is, he definitely had it.”

Collins had long hoped to attend Bishop Gorman, the program for which many of Vegas Elite’s stars have historically played. He was admitted to the school ahead of the 2017-18 academic year. He spent most of his freshman season coming off the bench behind an established senior, though he was obviously a superior player.

He played a key role on Gorman’s 2018 Class 4A state championship team, often sharing the floor with the upperclassmen during crucial moments in close games.

It was as he progressed through the program, though, that he obtained more autonomy and cache. Multiple people close to the program said he was often late to practices without consequence.

One of his former teammates at Bishop Gorman said Collins wasn’t the only player in the program afforded those kind of privileges.

“There’s a lot of leeway and things like that. The younger kids, if you were late to practice, yeah, you’d be yelled at more. But with the older guys … the coaches aren’t really doing that. They knew how good he was. He was one of those where you’ve just got to let him be.”

Sitter conceded that Collins’ punctuality at practice — or lack thereof — was also an issue during the club seasons with Vegas Elite, especially once he became responsible for his own transportation. Collins was never late to games, Sitter said. He was chided several times for his tardiness, though it didn’t seem to change.

It’s hard to put into words, but it was this definite charm, charisma that he had, where it’s like you can never be mad at the kid.

According to court records, Collins has been cited twice for exceeding the speed limit by more than 20 mph, and his driving record includes two other citations, one for driving the wrong way on a one-way street and the other for a failure to pay full attention to driving.

Sitter said he wasn’t aware of his driving record until after the accident.

Collins continued to excel in both programs, accumulate scholarship offers and bolster his billing as one of the best players on the West Coast. He helped the Gaels to three consecutive state titles, and was the No. 43 player in the senior class, per 247 Sports.

The face of UNLV

T.J. Otzelberger was announced as UNLV’s men’s basketball coach on March 27, 2019. He began recruiting Collins the same week. He was the prototypical point guard for Otzelberger’s uptempo offense: a blur in transition, brilliant in the halfcourt and a disruptive defender all over the floor.

He’d spend the next 17 months pursuing Collins, hoping to secure a commitment from the local star.

“He immediately fell in love with Zaon and said ‘Geez, that’s the guy for me,’ ” said a person closely involved with Collins’ recruitment.

“T.J. was like ‘It’s going to be all about you. You’re on the billboard. Whether you score all the points or not, it’s going to be your show,’ ” the person said, describing the crux of Otzelberger’s recruiting pitch.

“It was set up perfect for him.”

Sitter said he believes Collins felt the weight of the expectations that followed, but that he seemed to embrace the opportunity.

“He was a great practice guy, and he was a sometimes workout guy,” Sitter said. “The minute he committed to UNLV, he was in the gym twice a day every day. … He was prepared for it.”

The Rebels reversed course in the days after the crash, and Otzelberger released the following statement Jan. 7.

“We have talked with the Collins family and have come to the mutual decision that it is in the best interest of everyone that Zaon focus on his other priorities,” he said. “It is a tragic situation and our hearts and prayers go out to all that have been impacted.”

The coronavirus pandemic prompted the Nevada Interscholastic Athletic Association to delay the high school basketball season, upending the semblance of structure to which Collins was accustomed. He drifted from his coaches without organized basketball to keep him afloat.

“That did begin to start a trend of a different lifestyle he had,” Sitter said. “Basketball is what kept him dialed in and focused. … He missed the (club) season. They canceled the high school season … I’m not trying to make excuses for him, but the combination of those things put him in a position where he had the time and the opportunity to make poor choices.

“After the fact now, I say, yeah, you know what he probably didn’t answer the phone as much as he normally did. He wasn’t as responsive. … He was starting to slip. These kids are going through a lot. A lot of depression going on and the way that they handle it is sad for some of them. I really feel like he was starting to fall into some kind of funk. He obviously wasn’t making the same type of choices he would normally make.”

Collins did play for Gorman under a club designation in October at an event in Arizona. He also played in December for the Las Vegas Pilots, a soft reboot of Findlay Prep, the former prep powerhouse that was once based at the Henderson International School. The roster included some of Collins’ Gorman teammates, along with other seniors from around the Las Vegas Valley.

Thornton was tabbed as the coach.

The Pilots had practice Dec. 30. Sitter said Collins was “running late” when he collided with Echevarria’s vehicle.

Police said in their arrest report they found a “green leafy substance” inside a jar in his car.

Wolfson’s office said in statement that a blood test showed that Collins had an amount of THC in his system at the time of the crash that exceeded the legal limit in Nevada. THC, short for tetrahydrocannabinol, is the psychoactive ingredient in marijuana. The statement also said that a police investigation revealed that Collins was driving 85 mph in a 35 mph zone.

Speaking of Collins, a parent of one of his former teammates said, “Maybe just because he had his hand held for so long, maybe he didn’t really understand the consequences of things,” while noting he was devastated for Collins, his family and Echevarria’s family — the consensus feeling among those involved in youth basketball in Las Vegas.

“I was surprised (the crash) happened. But I wasn’t surprised. It’s weird.”

Collins was arrested and released the next day on “the highest level of electronic monitoring.”

He was also ordered not to drive and to abstain from using drugs or alcohol.

He’ll have his day in court. His case has reverberated around the Valley.

“Maybe we have to make sure we’re staying in tune more with our kids, especially if they’re doing a lot of things on their own,” Sitter said. “Having systems in place to make sure that there’s checks and balances and the kids are staying on the right path, you can never be too careful. You can never ask too many questions. You can never pry too much into teenagers’ lives.”