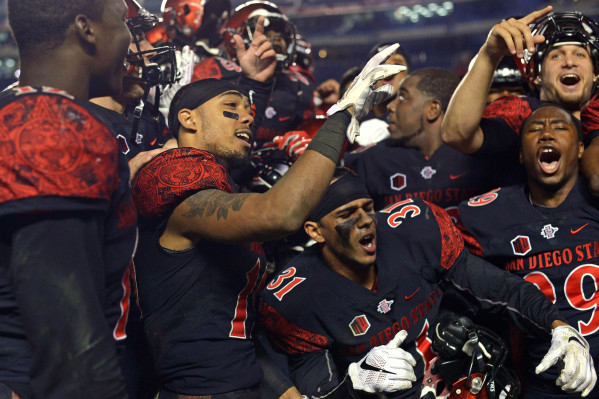 1. Is there any hope this weekend? The odds certainly are against UNLV, and with a leaky defense and uncertainty at quarterback, the Rebels have their share of problems entering this game. But their one ray of hope is the Rebels have played well against San Diego State in Las Vegas, going 6-5 in those meetings.

2. Is quarterback Blake Decker done? Coach Tony Sanchez will expound more on that this afternoon in his weekly news conference, but the fact Decker is not even listed among the top two on the depth chart isn’t a good sign.

3. Any chance the redshirt is removed from freshman backup quarterback Dalton Sneed? Only in an emergency, and maybe not even then with just two games remaining in the season. If Kurt Palandech gets hurt, the Rebels could put in Sneed or go to a wildcat formation with a running back taking snaps and try to get through the game.

4. What’s happened to the defense? There have been signs as the season went along that the defense was beginning to fracture, and then everything went to pieces in Colorado State on Saturday. The defense has always been thin, so maybe the many snaps finally are catching up to that side of the ball.

5. What can still be accomplished this season? Assuming UNLV loses to San Diego State, the Rebels have a very winnable game the following week at Wyoming. If they split these final two games, that gives them four victories, double the number over eight of the previous 11 seasons. That would be a good selling point for Sanchez to make to recruits and the community, especially as he tries to get financing for a new football building.