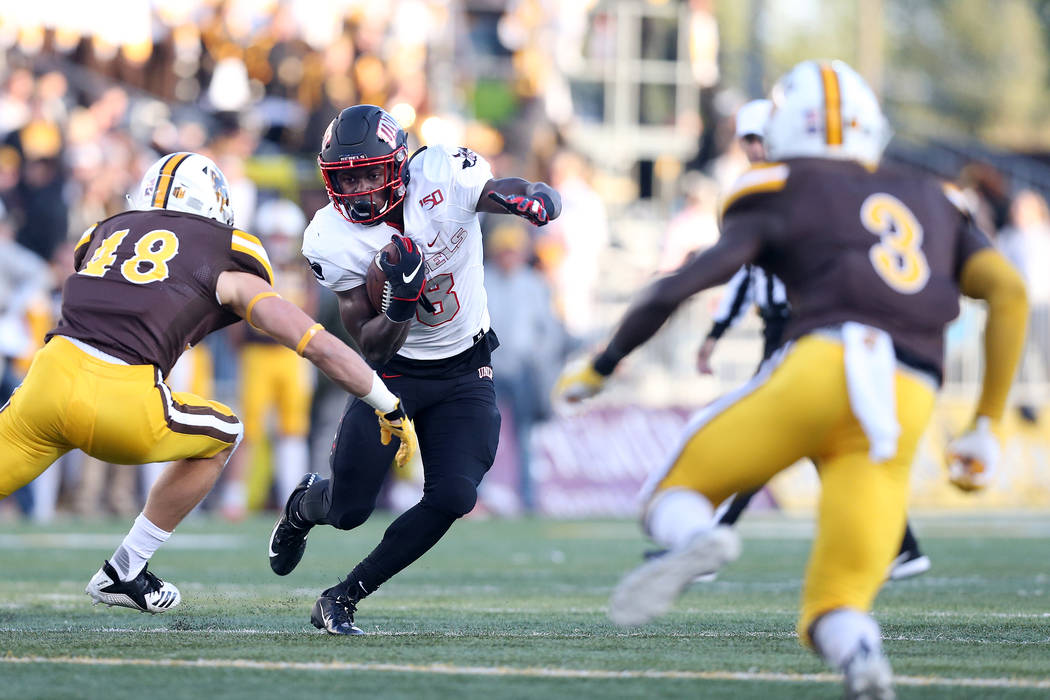 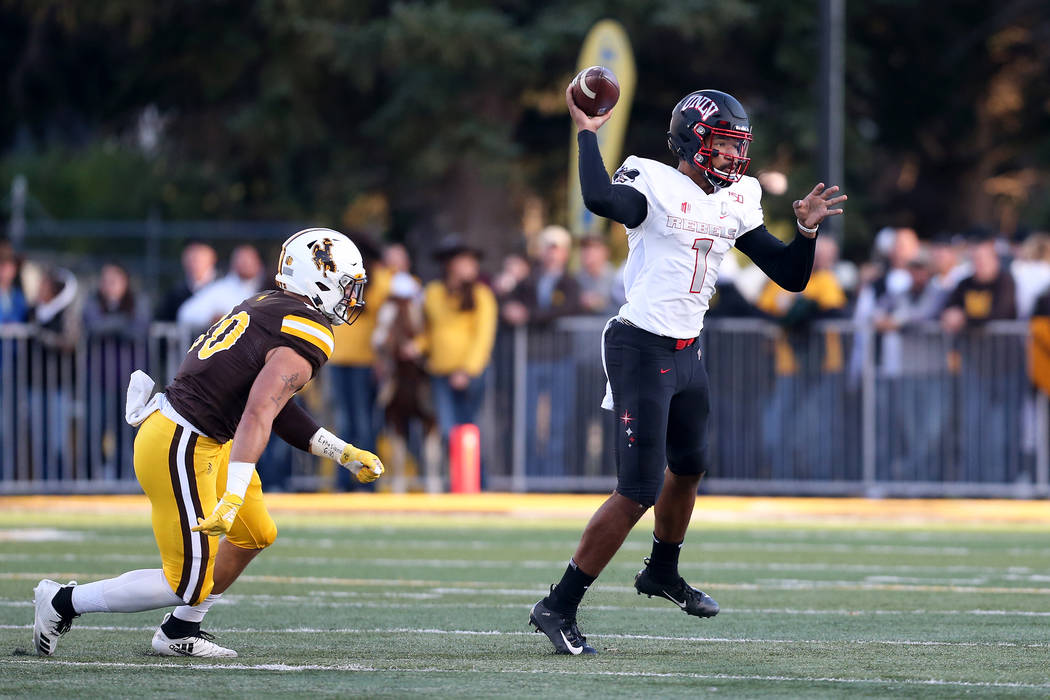 UNLV quarterback Armani Rogers throws a pass during the Mountain West game against the University of Wyoming on Saturday, Sept. 28, 2019, at War Memorial Stadium in Laramie. Michael Cummo/Wyoming Tribune Eagle 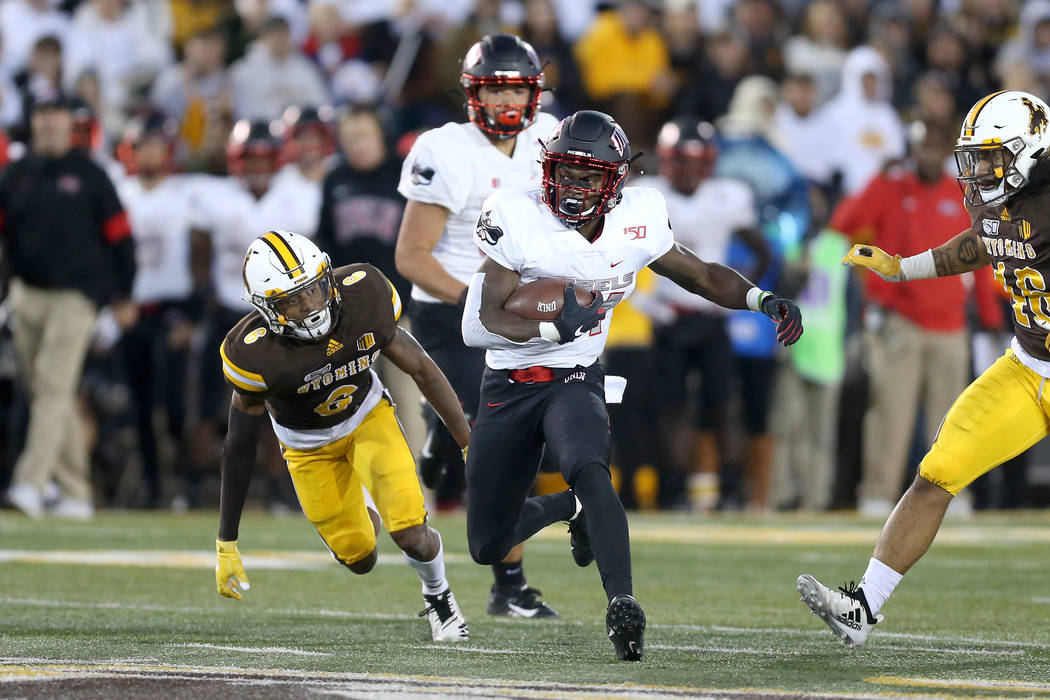 UNLV running back Darren Williams cuts upfield during the Mountain West game against the University of Wyoming on Saturday, Sept. 28, 2019, at War Memorial Stadium in Laramie. Michael Cummo/Wyoming Tribune Eagle 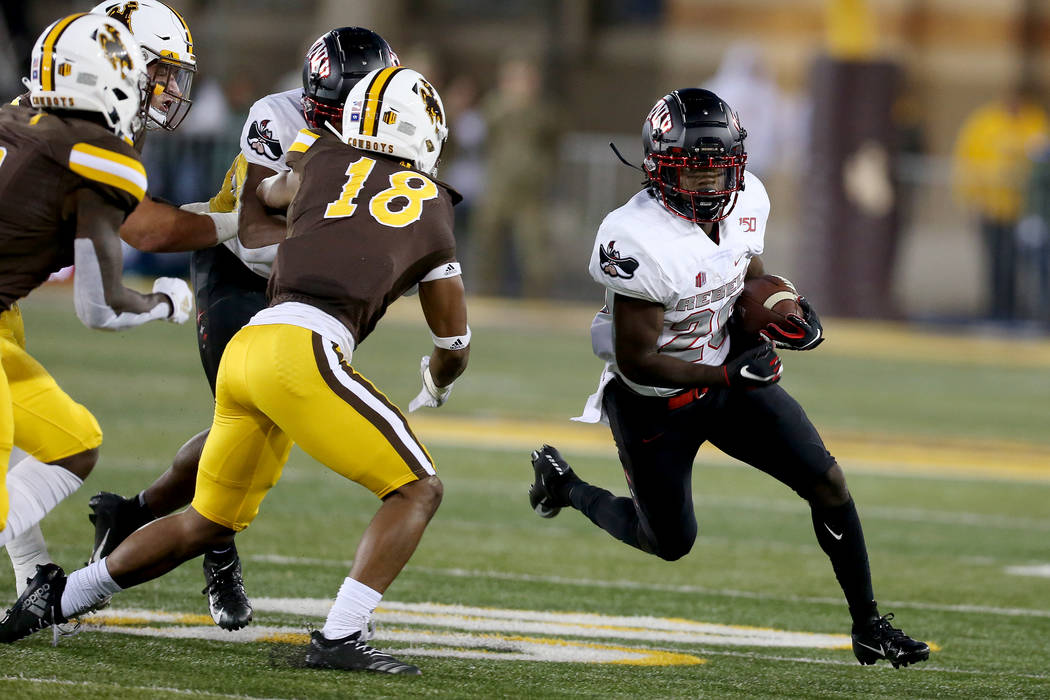 UNLV running back Courtney Reese tries to turn the corner while running during the Mountain West game against the University of Wyoming on Saturday, Sept. 28, 2019, at War Memorial Stadium in Laramie. Michael Cummo/Wyoming Tribune Eagle 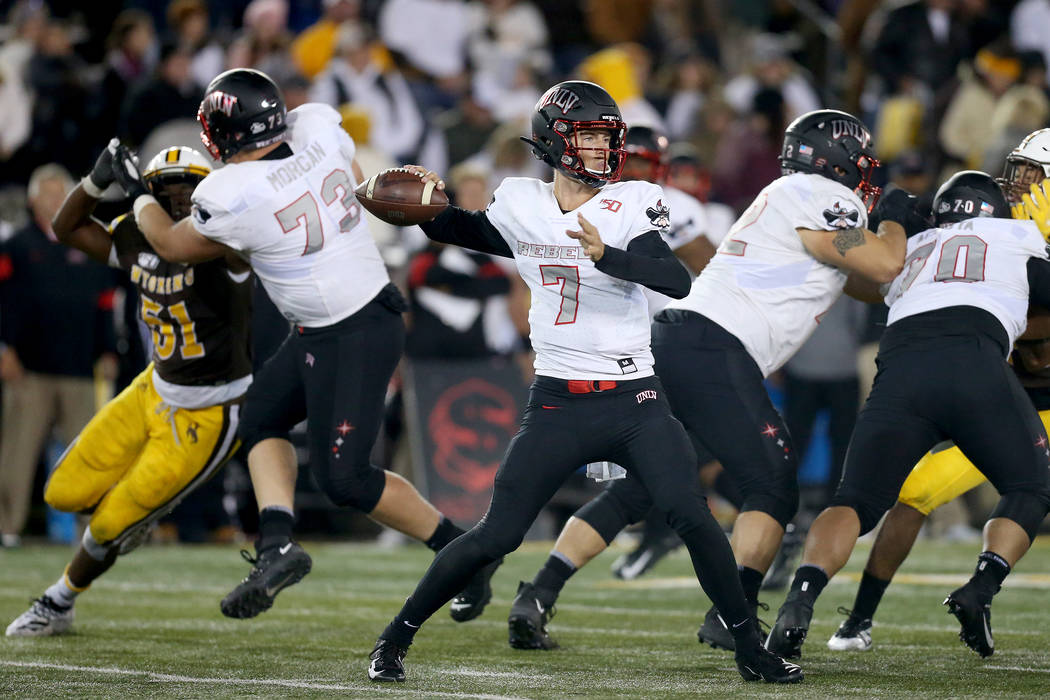 UNLV quarterback Kenyon Oblad throws a pass during the Mountain West game against the University of Wyoming on Saturday, Sept. 28, 2019, at War Memorial Stadium in Laramie. Michael Cummo/Wyoming Tribune Eagle

LARAMIE, Wyo. — When a team relies on its running game and its two best rushers are injured, bad results often happen.

UNLV lost its two best rushers — running back Charles Williams and quarterback Armani Rogers — in the second quarter Saturday night and the result was a 53-17 loss to Wyoming at War Memorial Stadium.

Entering the game, Williams led the conference in rushing yards and the Rebels were No. 2. But they were held to 77 yards on the ground in their Mountain West opener.

Williams suffered a right leg injury while being tackled by Wyoming cornerback Jordan Murry and didn’t return. He was carried off the field and couldn’t put weight on the leg as he was examined on the sideline.

UNLV coach Tony Sanchez said Williams, who had five carries for 17 yards, suffered a sprained knee and would be re-evaluated Sunday.

Rogers was injured later in the quarter. He was cleared to play in the second half, but Sanchez said he held him out because he was limping noticeably as the team returned to the field for the second half. He finished 6 of 13 for 87 yards with one touchdown and an interception and rushed eight times for 29 yards.

Redshirt freshman Kenyon Oblad entered the game with 2:08 remaining in the first half and played the rest of the way. He completed 16 of 31 passes for 176 yards and two interceptions and scored on a 1-yard run in the fourth quarter.

“Wyoming did a really good job at the point of attack,” Sanchez said. “Every yard we got was a really hard yard. It wasn’t like we were gashing them.

“We had a pretty good drive our first drive, but they did a really good job of settling in and just beat us up front.”

With Williams and Rogers out, UNLV (1-3) could have used a big effort from its defense. But it didn’t happen, as the Rebels allowed 374 yards rushing to Wyoming (4-1, 1-0). Running back Titus Swen and quarterback Sean Chambers each topped 100 yards.

“Really and truly, it’s disrespectful to our coaches because it makes it look like they don’t coach us at all,” White said. “That’s not the case at all. Our coaches did a great job the last two weeks of telling us what they were going to do.

“We knew they were going to run the ball, and they ran it down our throat and did whatever they wanted to do.”

The Cowboys responded on the ensuing drive. They had runs of 22 and 15 yards, but also got help from the Rebels when Evan Austrie was called for a late hit out of bounds on Chambers, who passed for 124 yards and two touchdowns and rushed for 102 and two TDs.

That gave Wyoming the ball at the UNLV 7, and Xazavian Valladay scored on the next play for a 7-3 lead.

UNLV used a gutsy call to reclaim the lead on its next drive.

On fourth-and-1 from the Rebels 46, Rogers faked a handoff before jumping at the line of scrimmage and dumping a pass to tight end Giovanni Fauolo. He was all alone behind the defense and scored from 54 yards.

That was pretty much it for UNLV highlights. The Cowboys had three touchdowns and two field goals on their next five drives to take a 33-10 halftime lead.

“We have to do a whole lot of soul-searching and get better real fast,” Sanchez said.