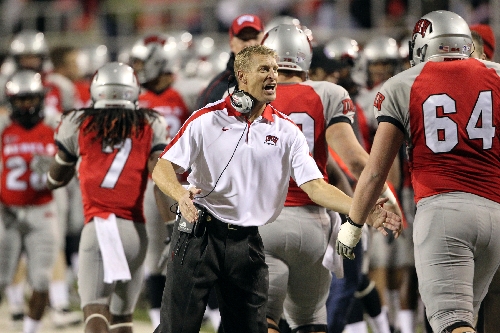 Quarterback Caleb Herring made sure to use his throwing arm when he waved to coach Bobby Hauck on Monday.

Herring’s status is uncertain for UNLV’s season finale at No. 18 Texas Christian at 11:30 a.m. PST Saturday. He absorbed a big shot during a 31-14 loss to San Diego State last week, and Herring appeared to suffer a shoulder injury and perhaps a concussion.

Hauck won’t confirm the injuries and has said he doesn’t like to specify quarterbacks’ injuries, fearing that opponents could target them.

If Herring doesn’t start, Sean Reilly will get the call, but Hauck said that decision might go all the way to game day.

Whoever starts for the Rebels (2-9, 1-5 Mountain West Conference) against TCU (9-2, 6-0) will need to spark a passing game that has, at best, stalled. The Rebels have put together only one 200-yard passing game, throwing for 294 on Sept. 24 against Southern Utah.

UNLV has been limited to single-digit passing yards once (8 at UNR) and double figures three times, including twice in the past three weeks. The Rebels’ 115.2-yard passing average is last in the Mountain West and third from last nationally. Only option teams Navy (92.4 average) and Army (48.0) are lower.

And now UNLV, a 39-point underdog, plays a TCU defense that hasn’t played up to its standards, but the Rebels are in no position to underestimate it. The Horned Frogs’ defense ranks 45th nationally, allowing 362.9 yards, but has ranked first in five of the past 11 seasons.

No other program has led the country that many times since the NCAA began keeping such statistics in 1937.

“On the whole defensive side of the ball, they’re fast,” Rebels offensive tackle Brett Boyko said. “They’re fast and physical, so it’s going to be a battle just to play with them, to grind it out with them.”

■ NOTES — Junior linebacker Princeton Jackson, UNLV’s most highly touted recruit from this year’s class, is expected to get his first career start. He has 34 tackles, including three for loss and two sacks. … Running back Tim Cornett, who reinjured an ankle Saturday, is listed as the starter. … Hauck’s former boss, Rick Neuheisel, was fired by UCLA, part of a rash of firings nationwide. Hauck spoke with Neuheisel, whom he worked for at Colorado and Washington, on Monday morning. Hauck called the conversation “personal,” but noted, “It’s not a very good day over there. There’s a lot of that going on. It’s an interesting business. It’s hard.”