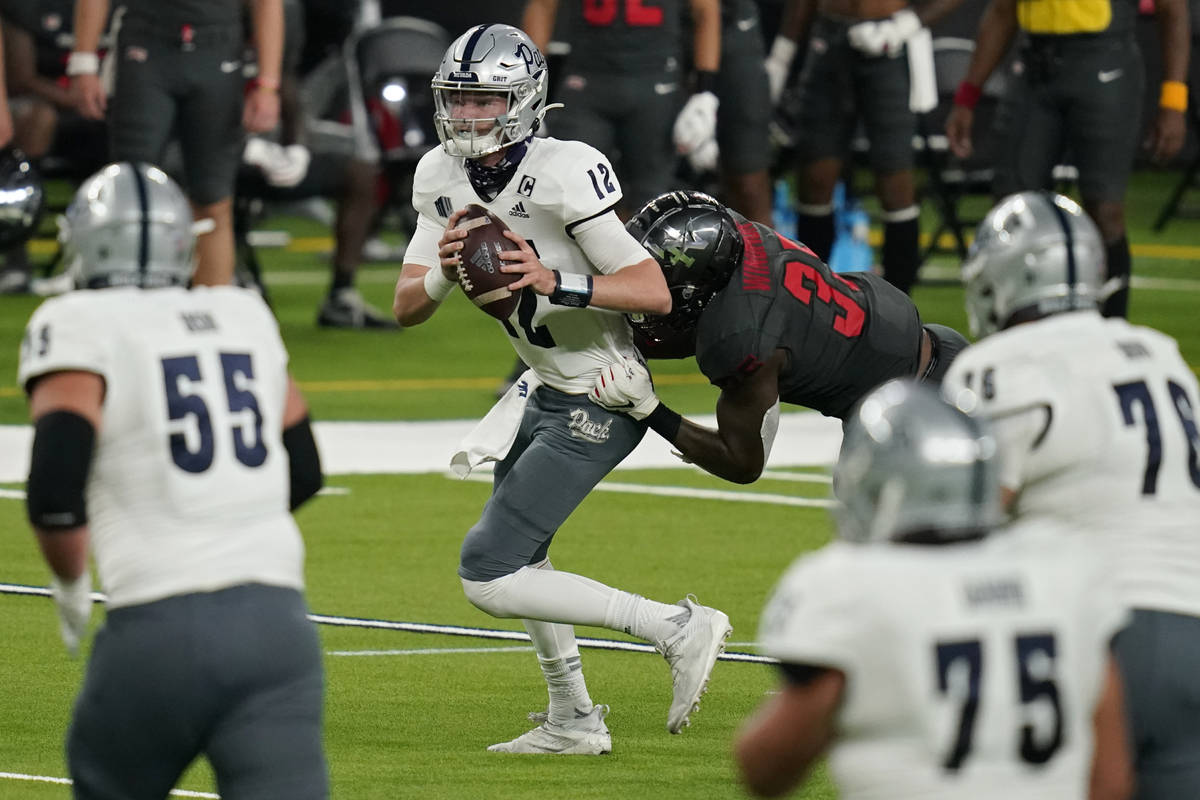 To say UNLV had problems putting pressure on quarterbacks last season is an understatement.

The Rebels finished the season with 12 sacks — one per game — and four players tied for the team lead with two apiece.

While the UNLV defense remains a work in progress, having allowed 37 points per game in an 0-3 start, they’ve been more disruptive in terms of getting into the backfield, or creating havoc plays, as UNLV coach Marcus Arroyo calls it. They already have eight sacks, and three players have at least two.

One of them is Jacoby Windmon, a 6-foot-2-inch, 215-pound sophomore from New Orleans playing a hybrid defensive end/linebacker position in the Rebels’ new scheme.

“Jacoby has gotten better every week,” Arroyo said. “He’s playing his tail off. We gave him a lot of props (Sunday). There isn’t a guy in that room after we watch film all together that doesn’t want a play back to see how they can improve … but Jacoby is doing an awesome job.”

The Rebels hope to continue to create havoc when they travel to meet a San Jose State team that is 3-0 for the first time since 1982 at 7:30 p.m. Saturday.

Windmon leads the Rebels with 3.5 sacks, is tied for the team lead with Adam Plant with 4.5 tackles for loss and with two others with two pass breakups. He’s second with 21 tackles.

Windmon has increased his production in every game, and he attributes some of that to gaining a better grasp of the new scheme under defensive coordinator Peter Hansen that gives players more license to move around before the snap to try to confuse offenses.

“I feel like we are just learning as we go,” Windmon said. “Each game is definitely a learning step for us. I feel like we’re getting that chemistry. We’re learning to play together. We’re learning how to move and how each other moves, so that plays a big part in our stunts and movements.”

Windmon was one of the Rebels’ leaders in last week’s 40-27 loss to Fresno State. He had nine tackles, 2.5 sacks and two pass breakups, but he also got a lesson in the importance of consistency, as UNLV had no sacks in the second half.

He also had a critical penalty, a roughing-the-passer call early in the second quarter. UNLV led 10-6, and the penalty was on a third-down incompletion that would have killed a Fresno State drive at its 32.

But the Bulldogs took advantage and scored a go-ahead touchdown three plays later.

“It was a play that was kind of selfish toward my defense,” Windmon said. “It was a situation that could have gotten us off the field, but it’s definitely a learning experience.”

Windmon said he and Plant, a sophomore who plays a similar position on the opposite side of Windmon, have developed a bond and compete every day to see who can get to the quarterback quicker.

Windmon leads, but Plant isn’t far behind. Plant, a former Bishop Gorman High standout who transferred to UNLV from Texas Christian, has 3.5 sacks and 18 tackles.

“It starts at practice. It’s competitive, and we go out there and do what we do best,” Windmon said. “The bond between the two of us is strong. We like to play together, and we play fast together.”

The Rebels are young and lack depth on defense, so Windmon said part of the maturation process is learning to play with fatigue. But he’s been impressed with the willingness of the other young players, particularly the freshmen, to jump in and not get overwhelmed by the leap in competition.

“I’m definitely proud. I see a lot of improvement from Week 1 to Week 2 and 3,” Windmon said. “We’re definitely getting better as a whole, but we have to execute more. There’s always more room to improve.” 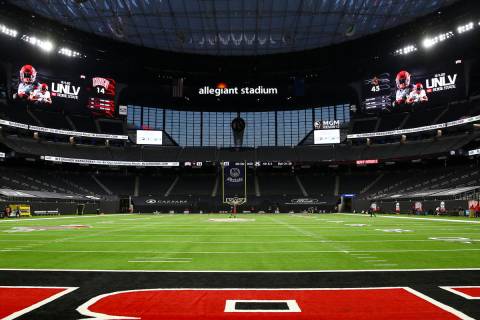 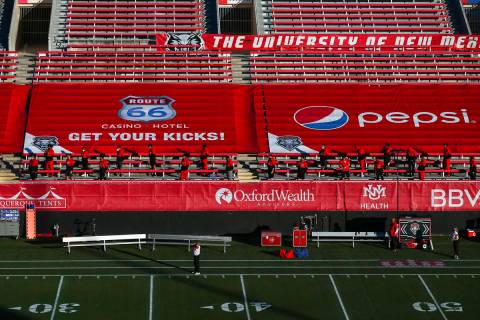 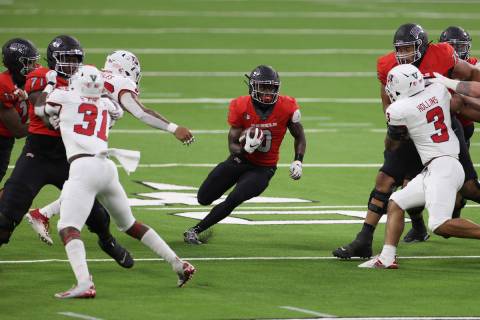 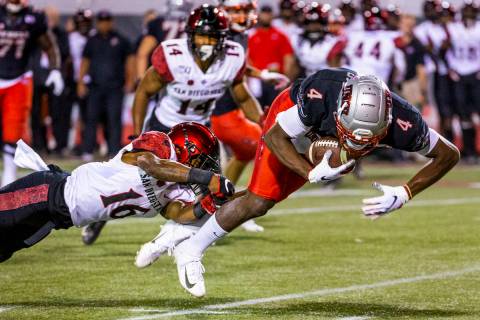 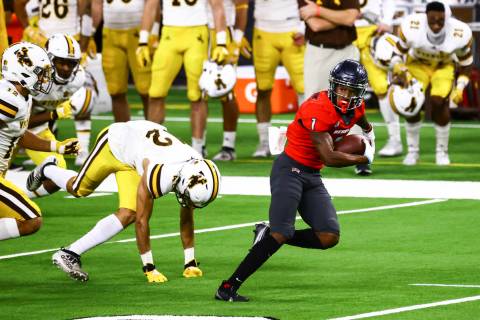 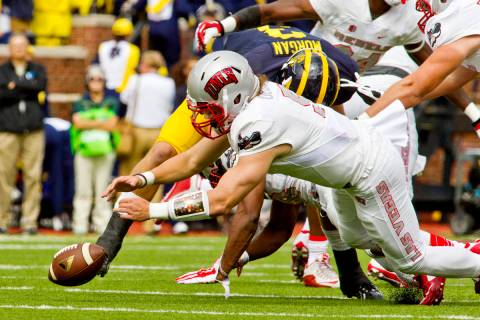 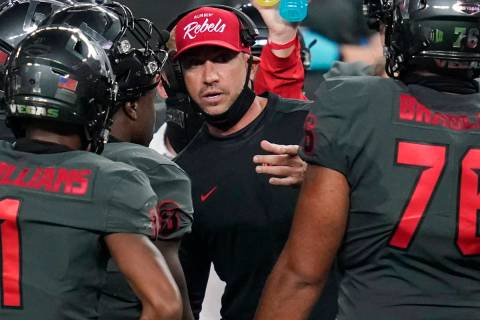 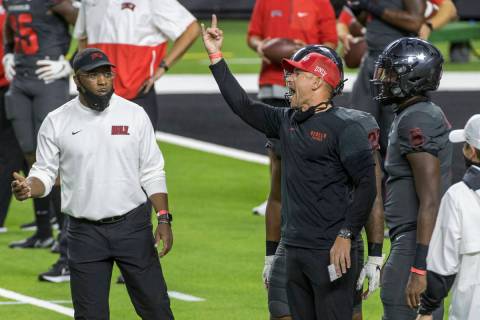