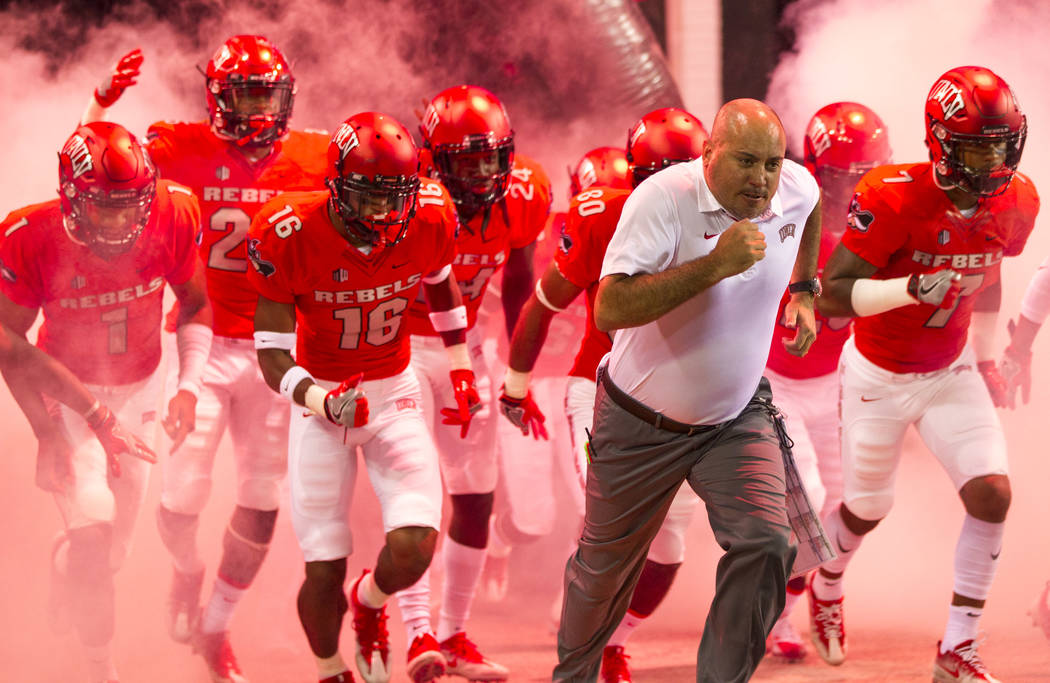 This is a big week for UNLV’s football program, hosting a ranked Mountain West team for the first time in six years and the chance to take a major step forward.

It occurs under the backdrop of Sunday night’s mass shooting that took place within eyesight of the campus, making focusing on the task at hand more difficult for the coaches and players.

But simply getting back to work and into familiar routines, UNLV coach Tony Sanchez said, is vital to the process of moving forward.

“What I’m feeling, what we’re feeling is nothing compared to some of these families,” Sanchez said. “I can’t even fathom what it would be like to get a call from my daughter or my son or my wife or a brother or sister. We’re going to be OK. Those are the people we really need to worry about and put our arms around.”

An upset victory would set up the Rebels for a bowl run and the West Division title. That’s important, but the Rebels also know it pales in comparison to the suffering caused after a gunman killed 59 people and injured 527 more at the Route 91 Harvest country music festival near Mandalay Bay.

Both teams will have a decal of a red ribbon with “Las Vegas” placed on one side of each helmet, and coaches on both sidelines will wear ribbons. A ribbon also will be on the field, and fans will receive wearable ones when they enter the stadium.

Before the game, the victims will be honored, and first responders, medical professionals and others will be recognized. A full-field American flag will be unfurled for the national anthem.

“Vegas is real small, so a lot of people are connected somehow,” said UNLV defensive tackle Mike Hughes Jr., who went to Palo Verde High School. “So you somehow know somebody that knows somebody that was hurt. I would say, yeah, it’s personal.”

“The tragedy that’s happened in Las Vegas has changed the feel of this game,” Long said. “I’m sure there are a lot of things that are going to be different at the game and at game time. I have no idea what’s going on in Las Vegas, especially with their football team and what the atmosphere is, but obviously it’s going to be different than what we normally get ready for.

“The game is important, but it’s not nearly as important as everything else that’s going on.”

There is a strong Las Vegas connection with the Aztecs. Three assistant coaches have direct ties to UNLV, and the roster includes five local players.

“So it’s bigger than football at that point,” San Diego State safety Trey Lomax said. “As far as this week, we’re still preparing like it’s another game on our schedule, but I’m assuming when we get out there, it will be a different vibe and we’ll probably feel it out there. It’s been locker room talk the last couple of days, but that’s obviously something you can’t not talk about.”