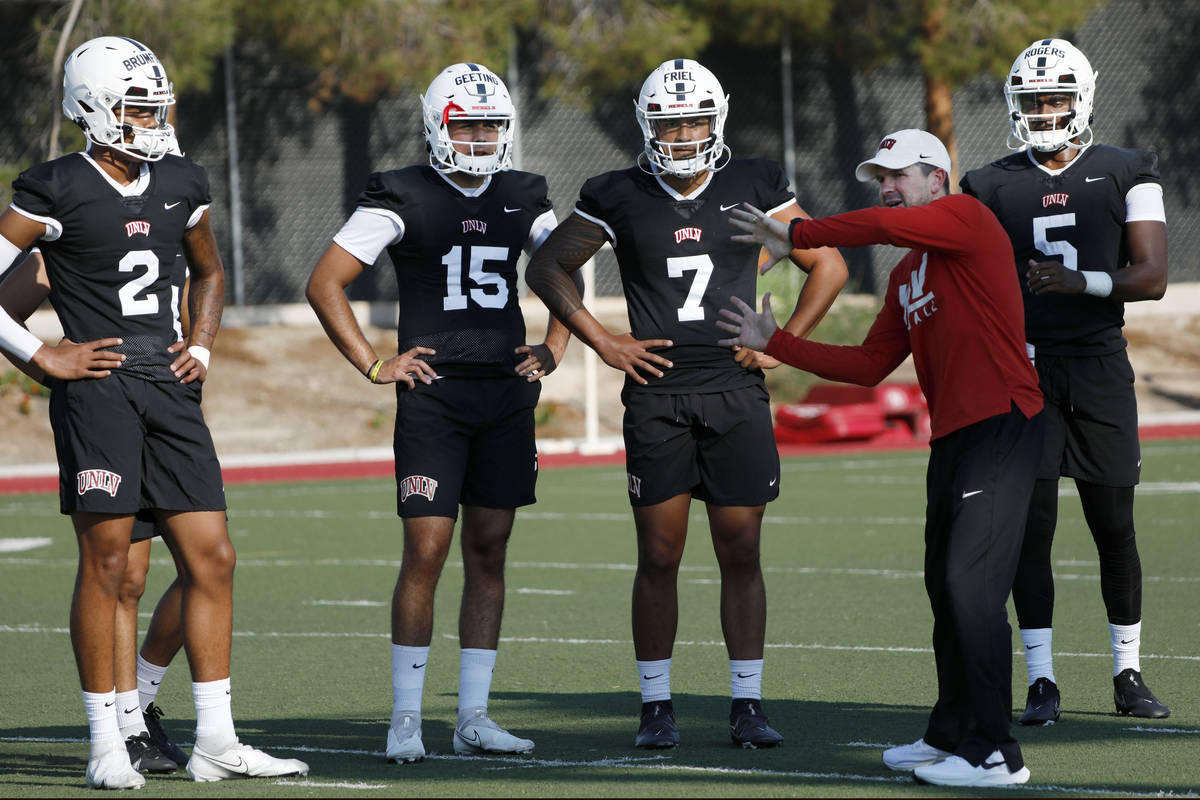 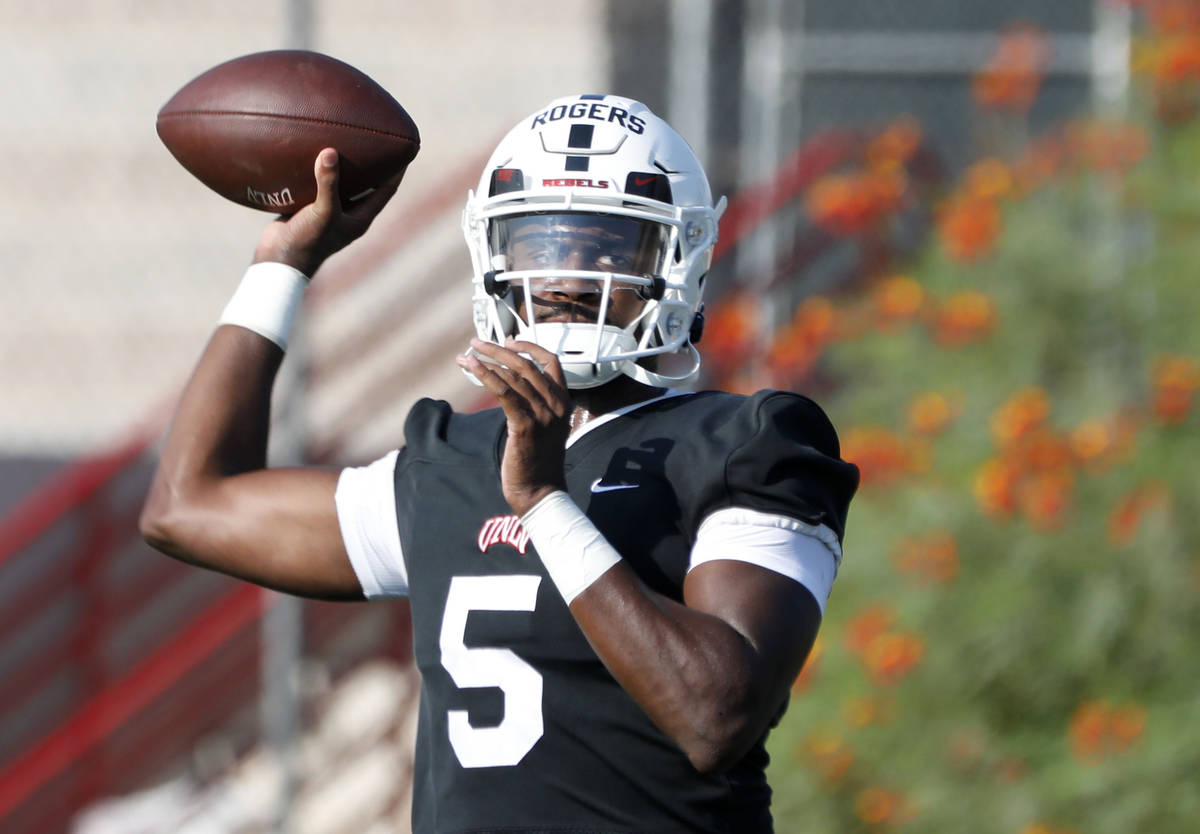 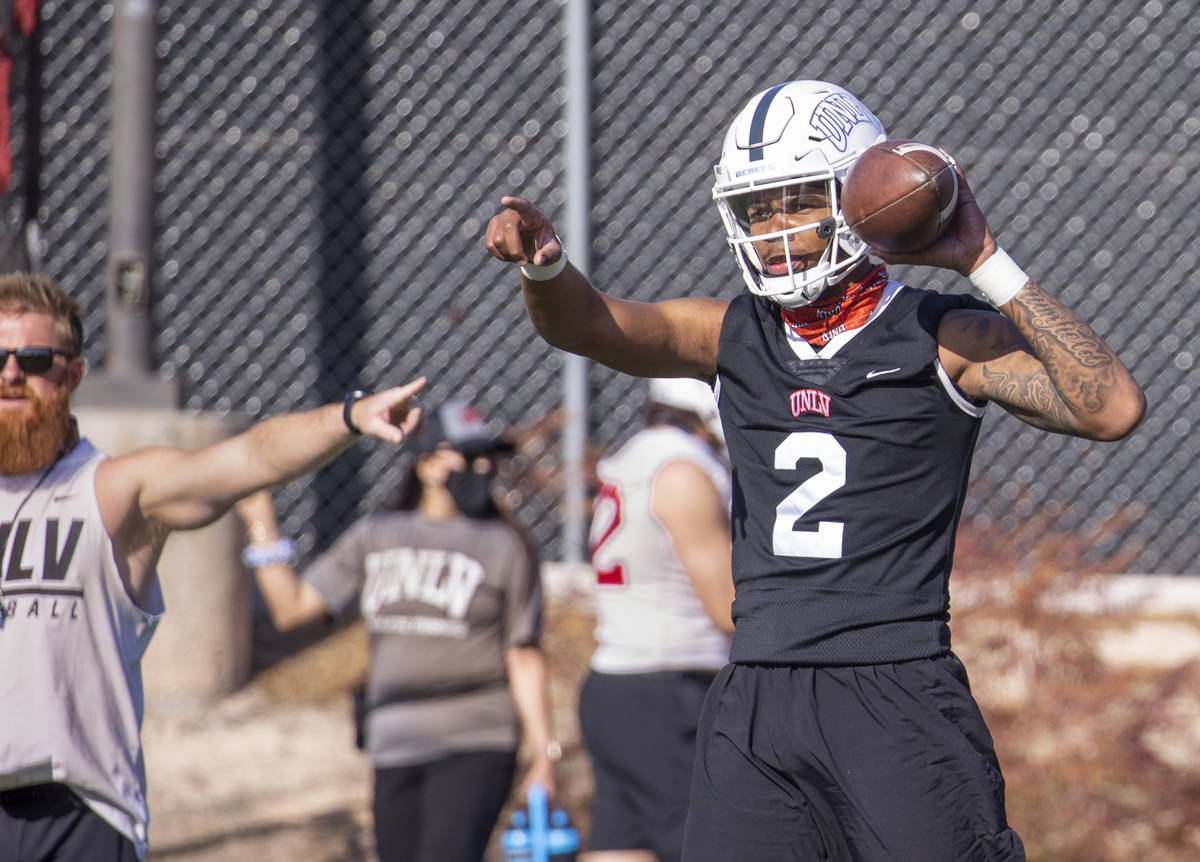 UNLV football coach Marcus Arroyo wouldn’t say on Monday who would start at quarterback when the Rebels open the season against Eastern Washington on Thursday at Allegiant Stadium.

“If I told you, I’d screw it up,” he said with a smile. “We’ve switched them off and on with the ones the entire camp. … Neither of those guys would flinch regardless.”

Doug Brumfield or Justin Rogers will start. The first official depth chart released Sunday night listed both as starters, and Arroyo said both are prepared to play Thursday. They could rotate, but the hope internally is that one of the two can find a rhythm and seize the reins.

“If one guy gets a hot hand, that’s ideal,” Arroyo said. “There’s no real rotation set. … We’re going to see if one guy can go out there and go by the time we get to kickoff. And we’ll play it by ear.”

Brumfield and Rogers split the majority of repetitions during spring practice and fall camp, which concluded last week as the Rebels transitioned into their preparation for Eastern Washington. Brumfield, a 6-foot-5-inch left-hander, is a sophomore, and Rogers, a 6-4 right-hander, is a fourth-year junior who transferred last year from Texas Christian.

Rogers said the quarterback competition “was kind of awkward at first, just because there was a lot of new guys,” including freshman Cameron Friel and former Bishop Gorman standout turned Rebels walk-on Tate Martell.

“But we’ve got a growing relationship. I love all of them like they’re my brothers,” Rogers said. “Anything that I know that they don’t know, they tell me. And vice versa. We’ve got a lot of diversity in the room.”

Brumfield said he’s comfortable with a quarterback rotation, noting that he’s accustomed to it because of how the position was handled last season. Max Gilliam was the starter, but Brumfield and Rogers had opportunities to play.

“Players can’t wait to get out there,” Brumfield said. “Last year was disappointing. We’re ready to go out there and prove ourselves.”

Arroyo didn’t give a specific timeline for deciding on a starter, and Brumfield and Rogers said they haven’t been told anything.

“I think we’ll give them a chance to understand (who starts) prior to going into it, but both those guys have prepared to be the starter,” Arroyo said.