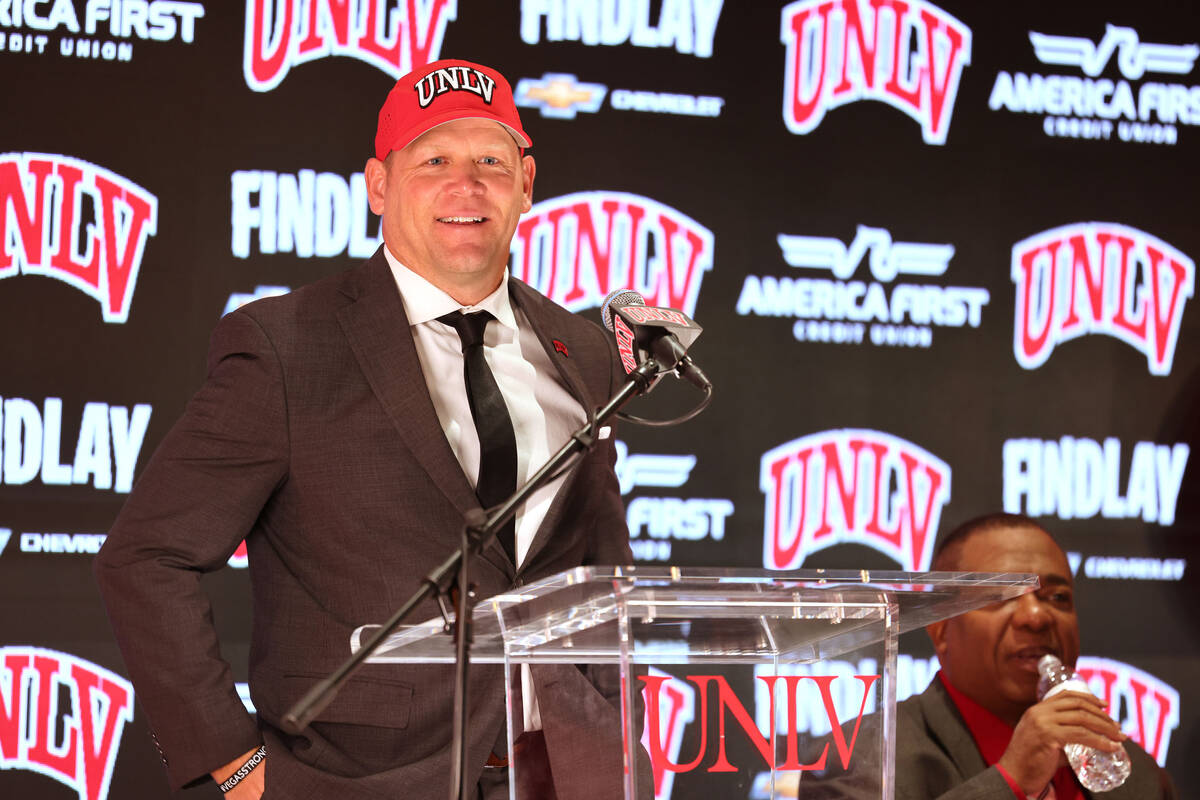 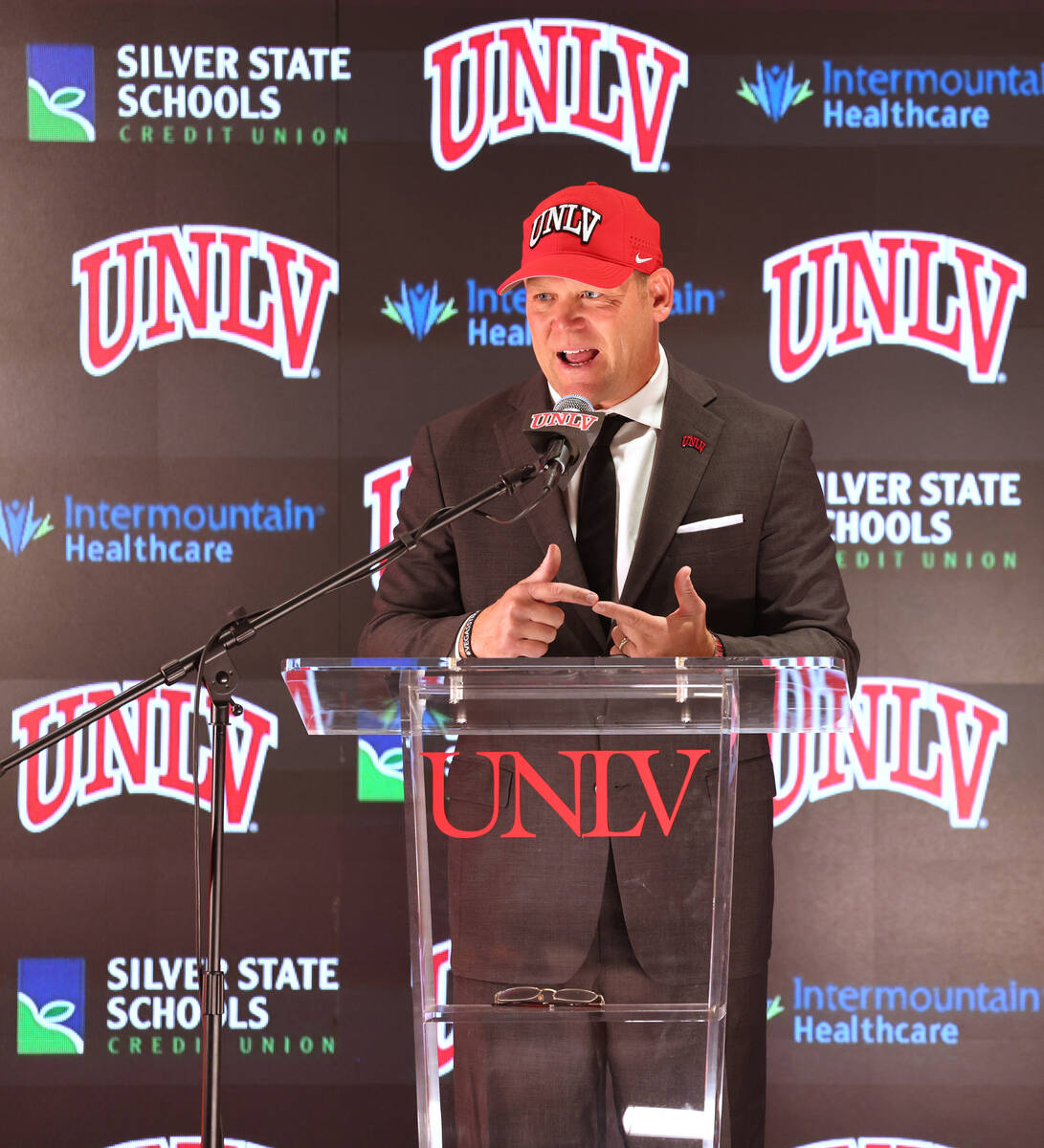 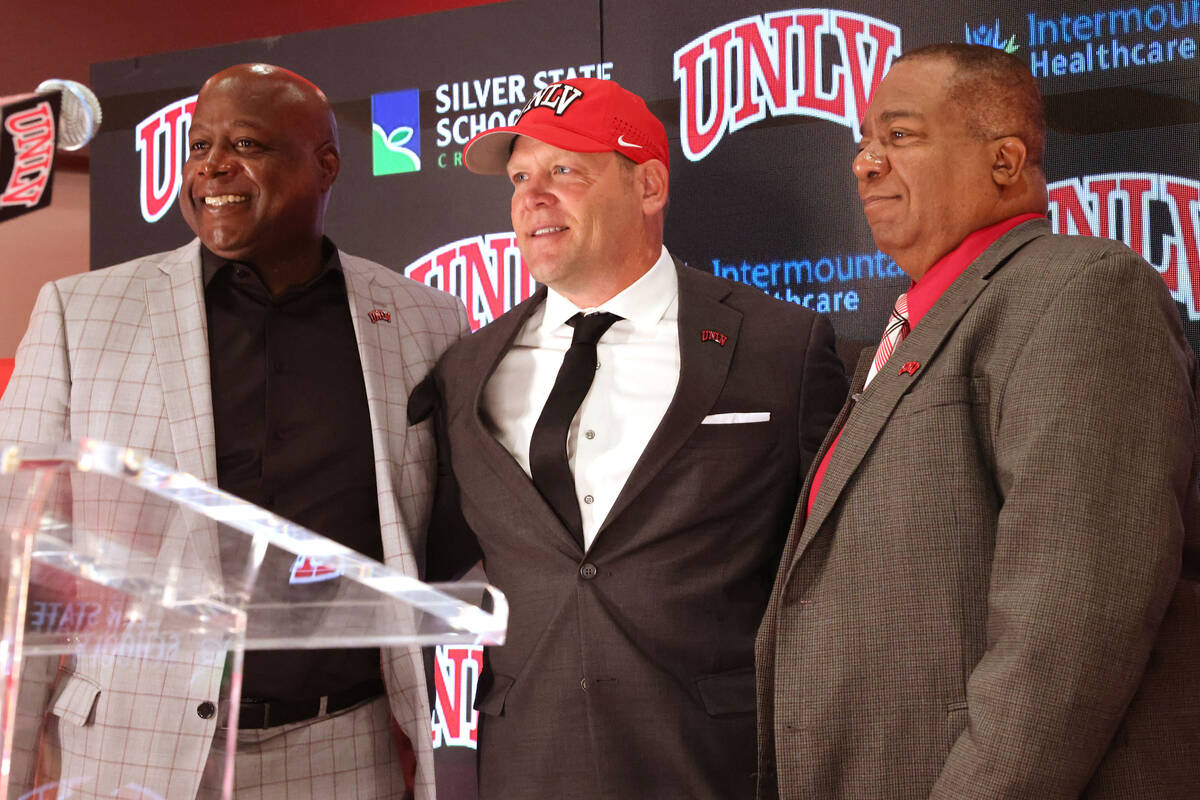 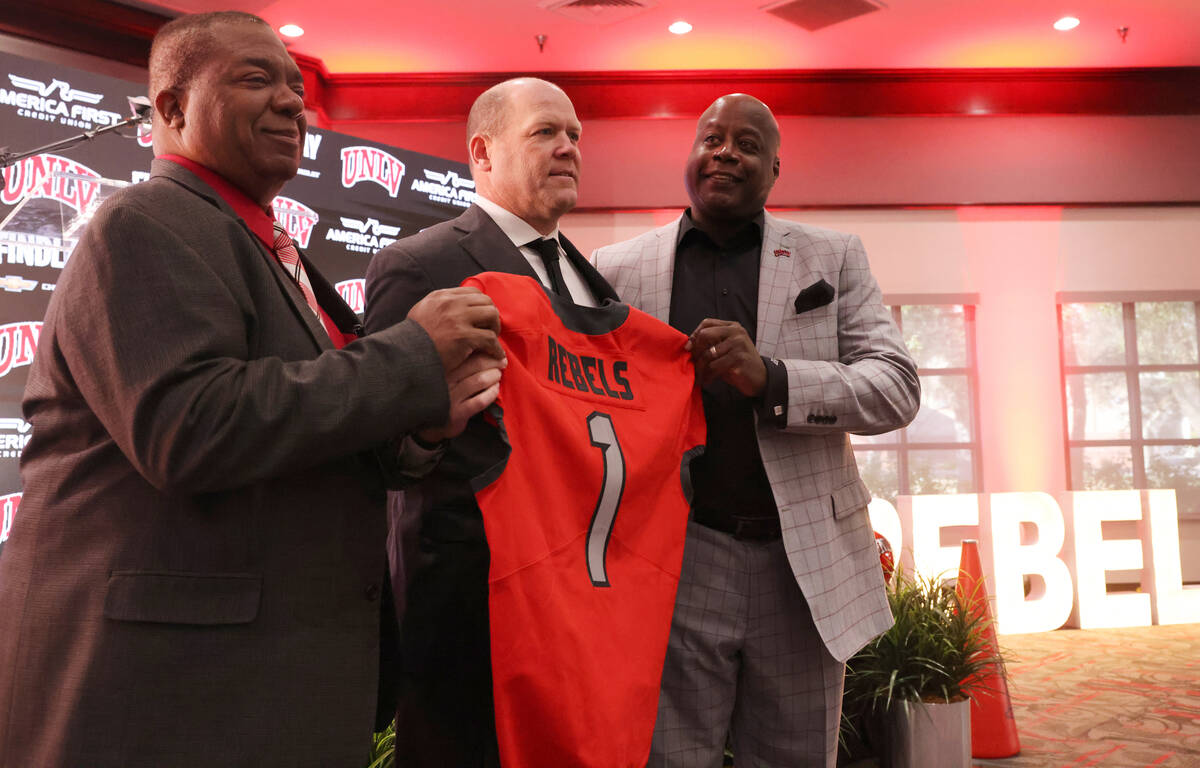 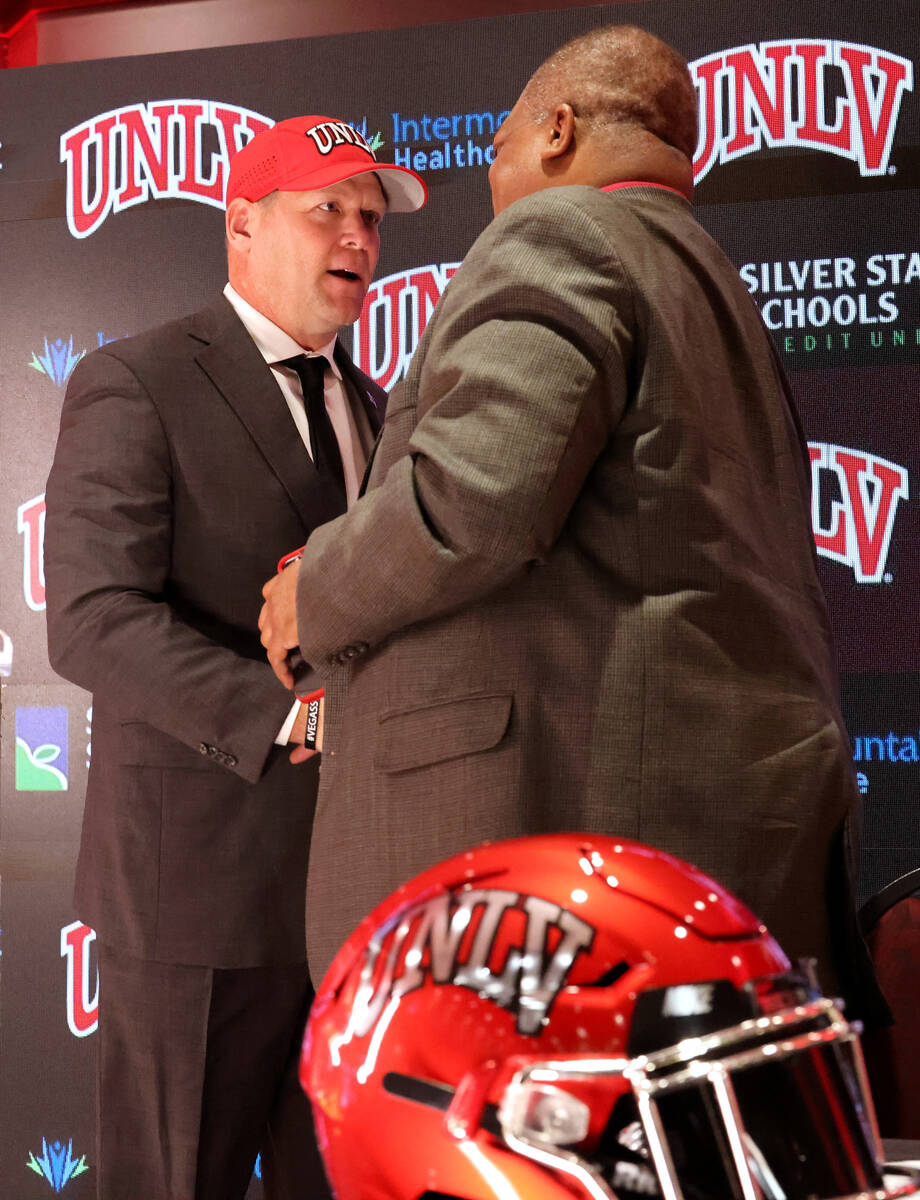 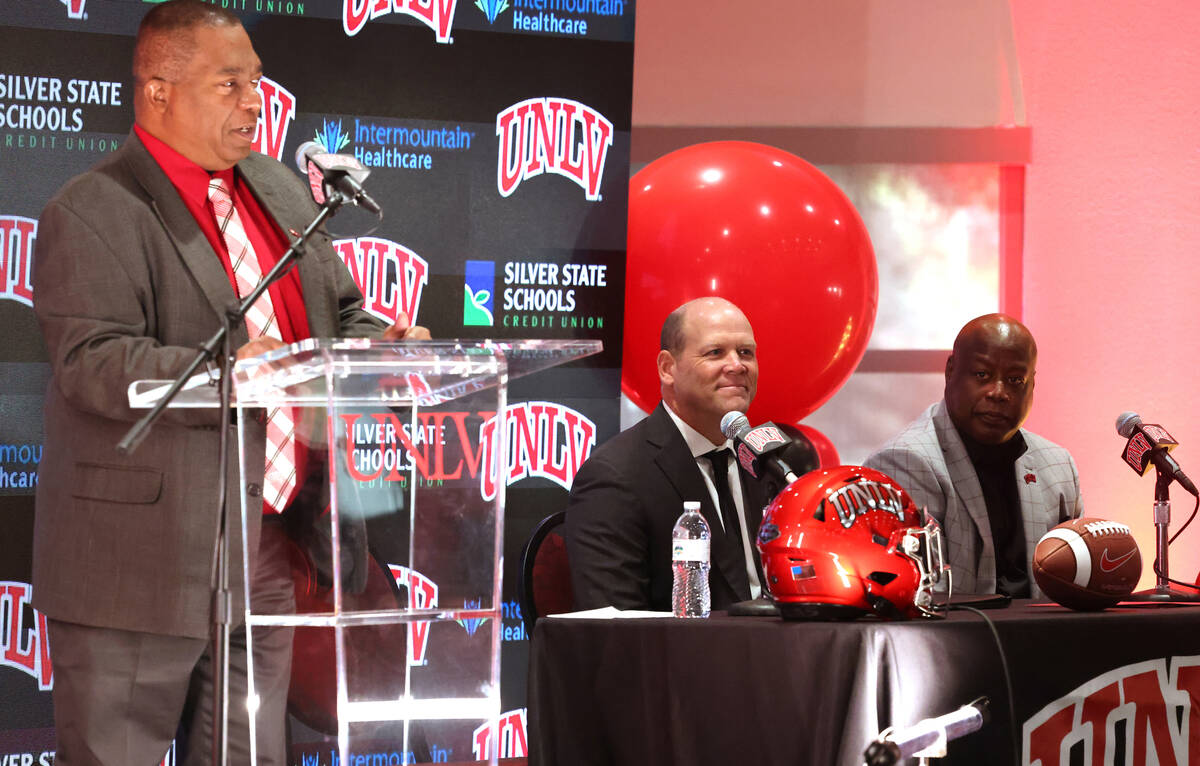 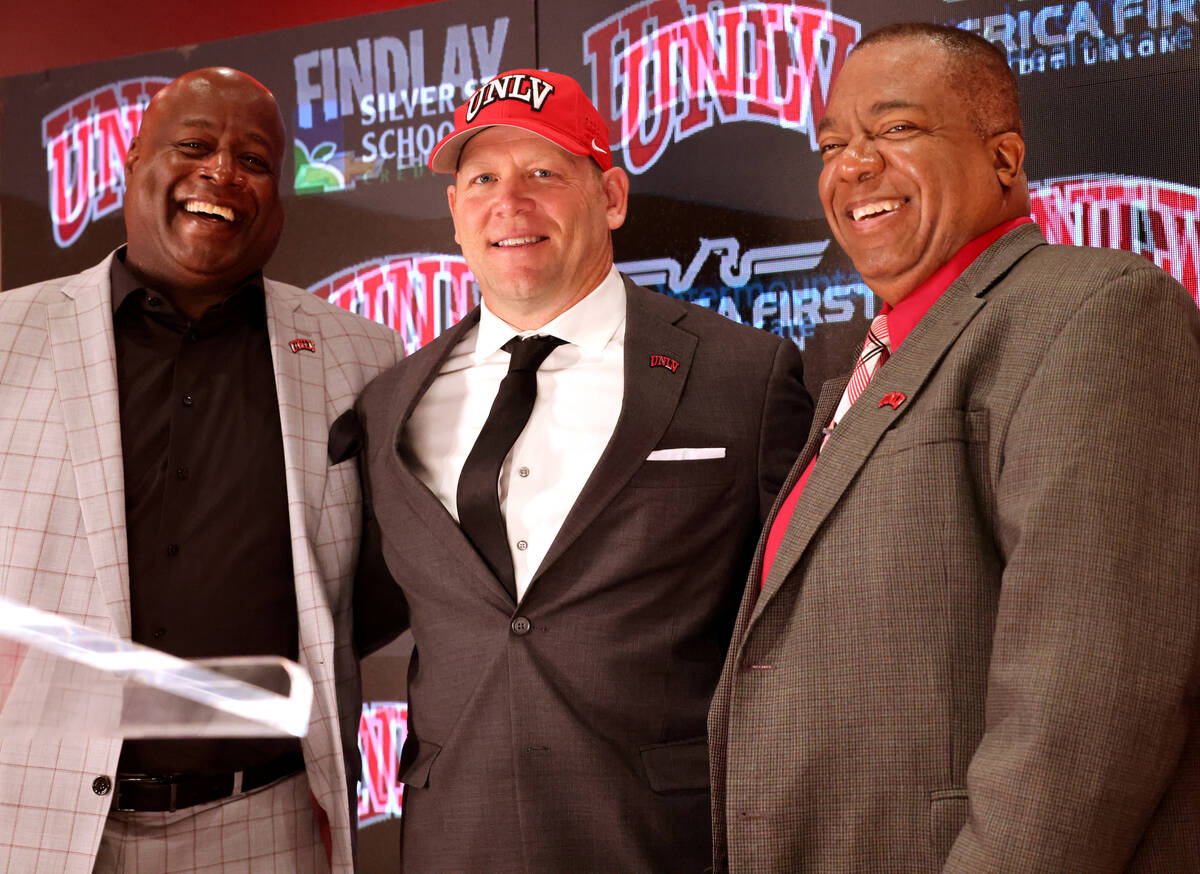 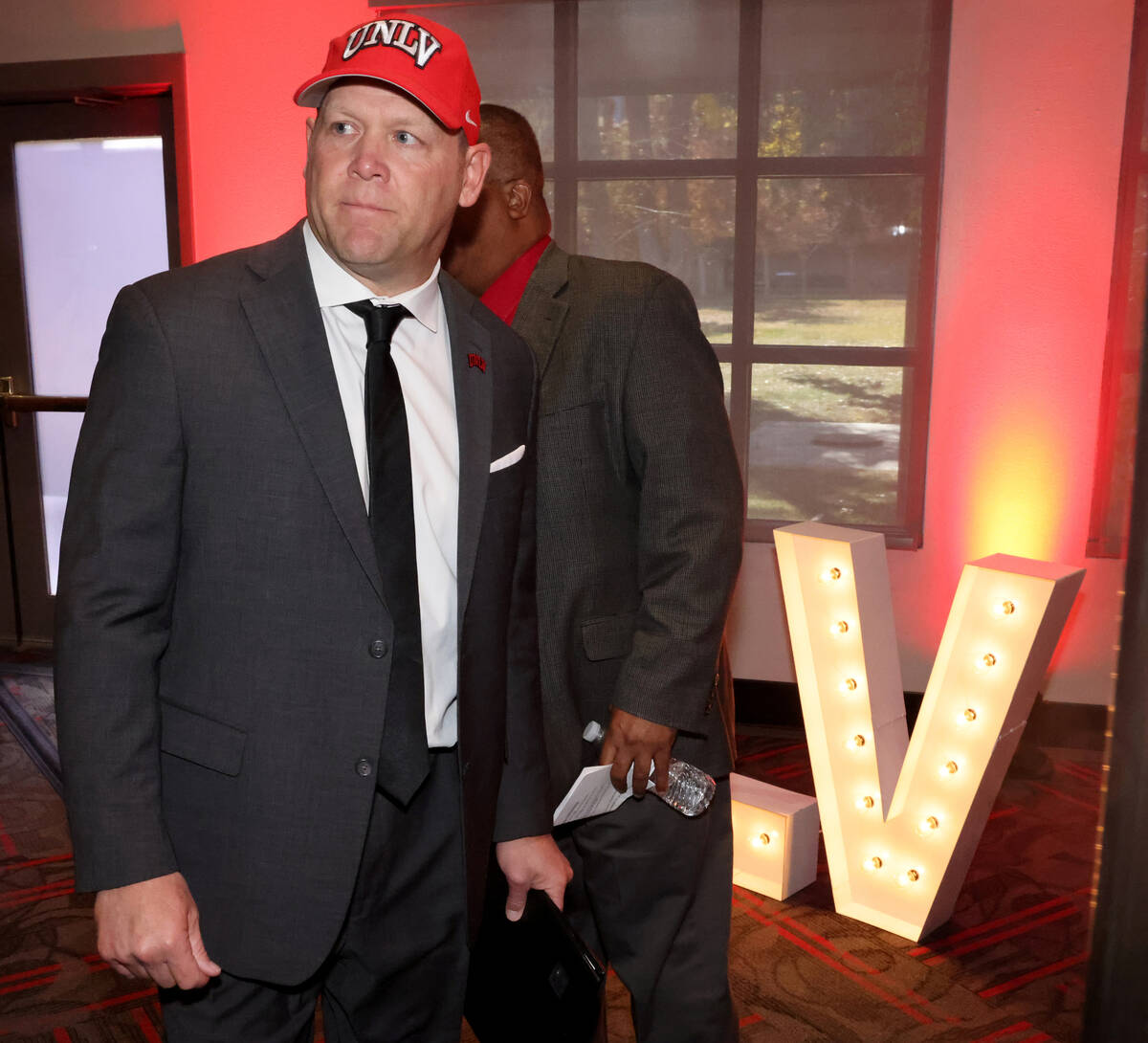 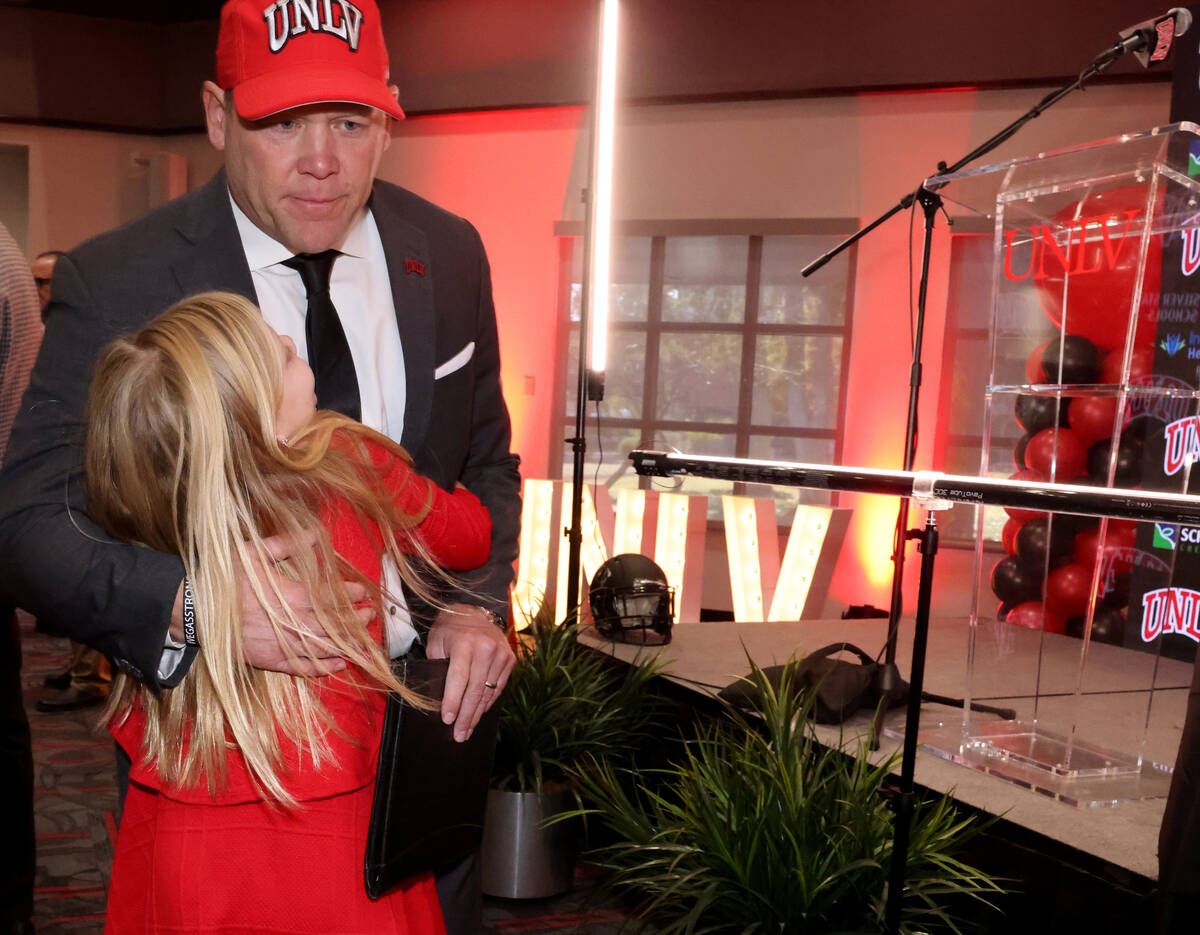 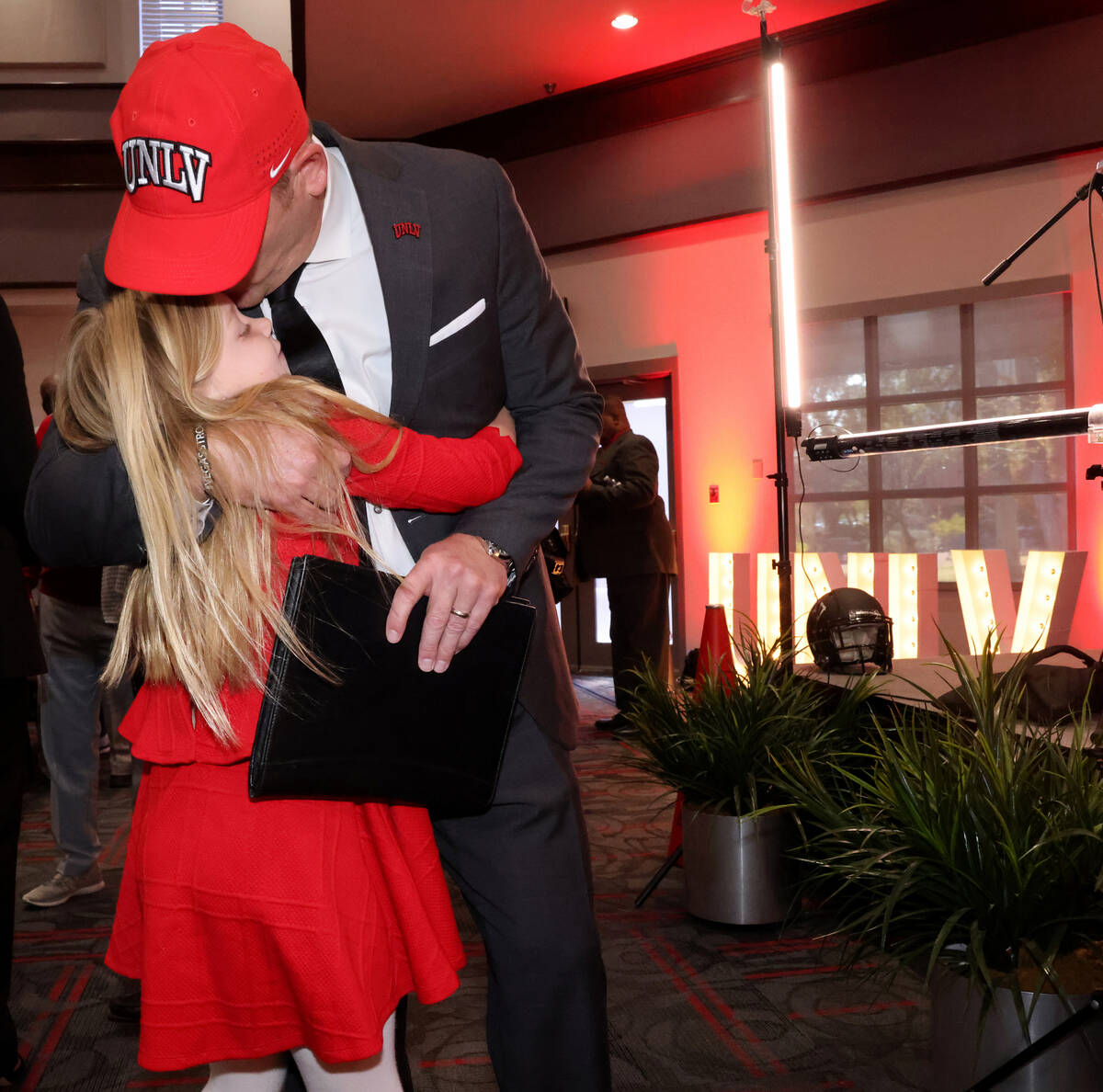 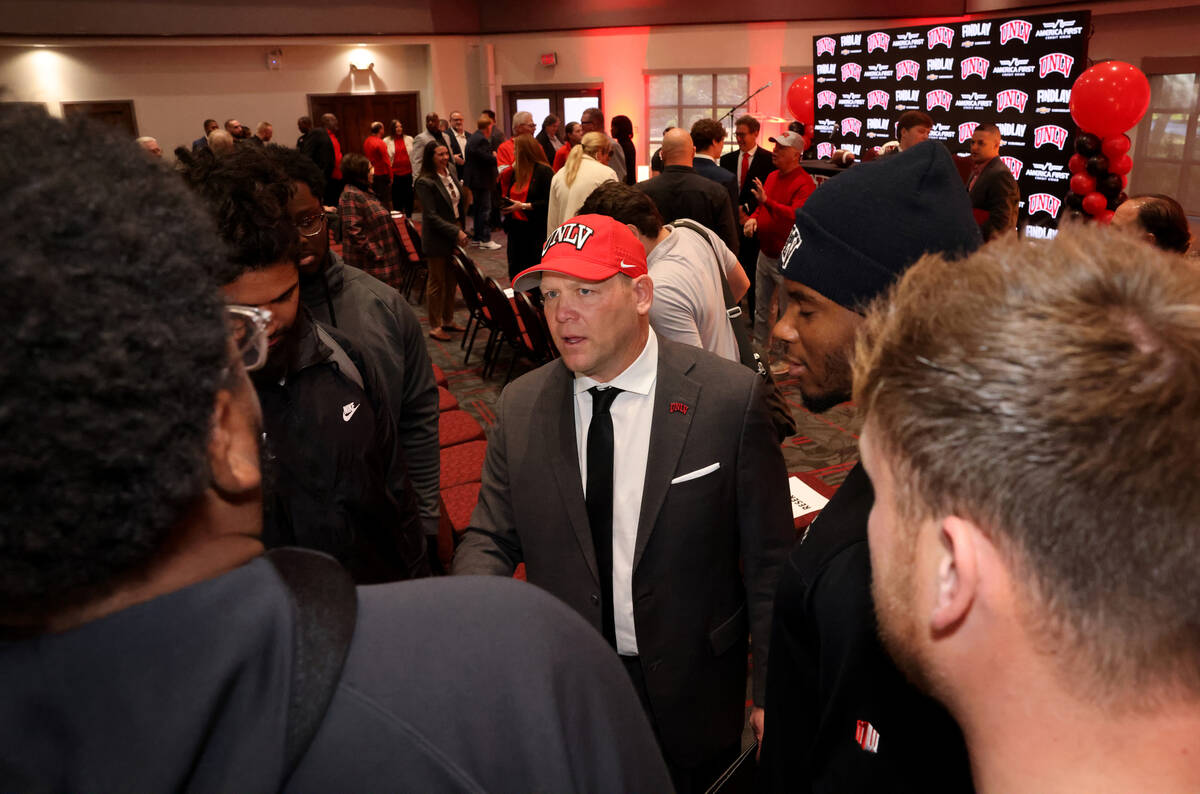 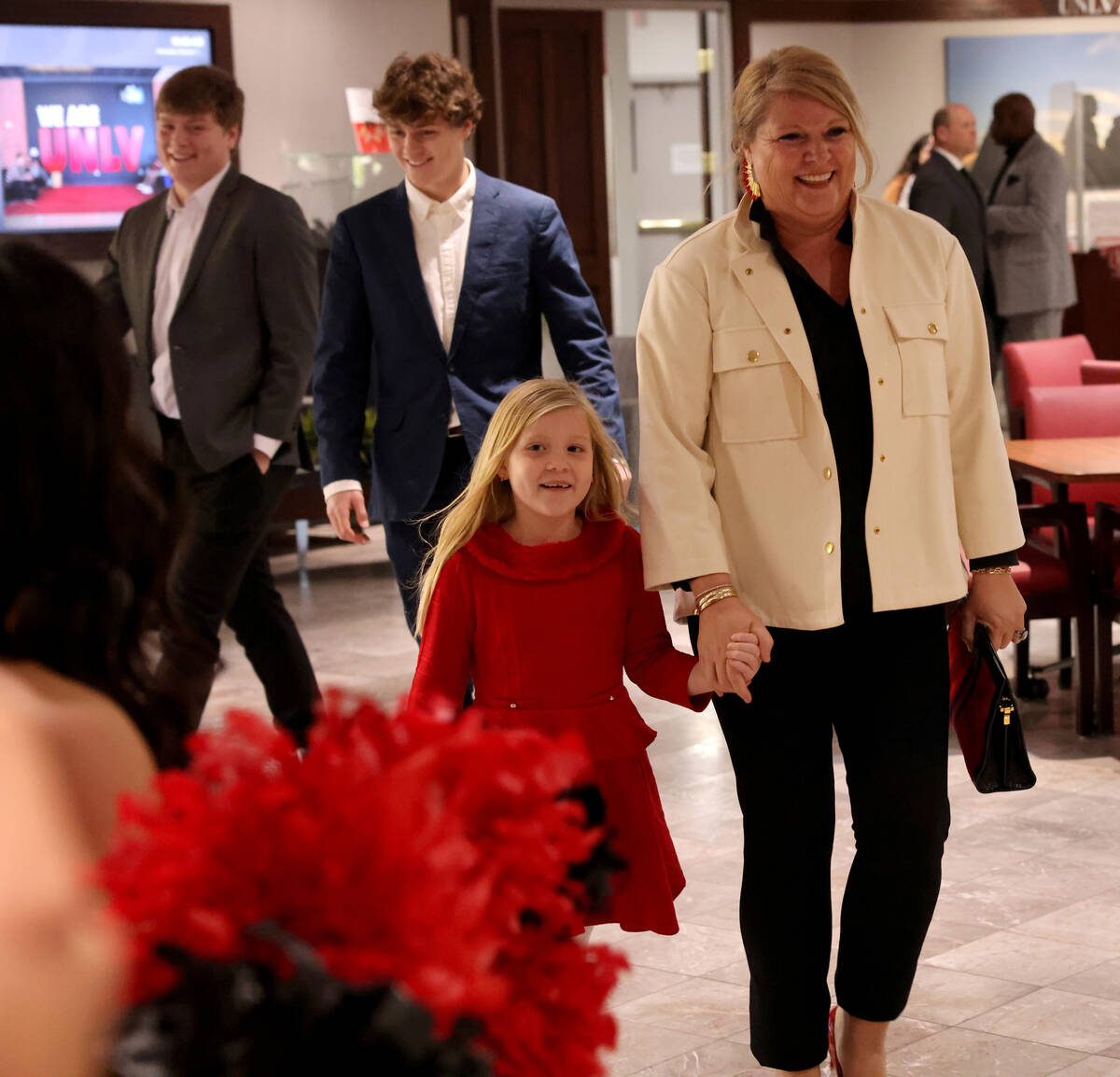 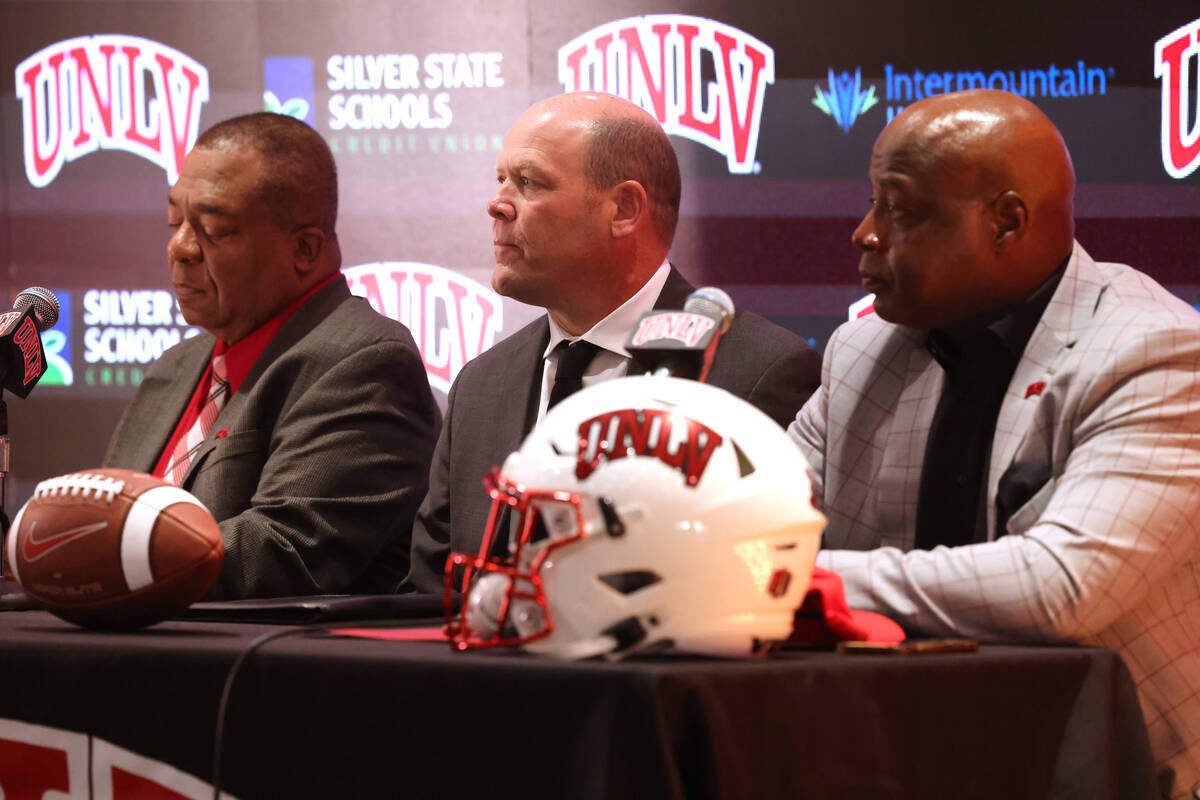 Before he was hired as the 13th coach in UNLV football history, Barry Odom set foot in the Fertitta Football Complex at Rebel Park.

Odom, then the defensive coordinator at Arkansas, was in Las Vegas on a recruiting trip during the spring. He’d already wrapped up his visit and had a few hours to kill before his flight, so Odom found his way to UNLV’s campus. He knew about the Rebels’ football facilities, but he wanted to see it for himself.

Odom found an unlocked door and sneaked his way into the lobby, made it through the “impressive” weight room and up to the second floor before someone realized he wasn’t supposed to be there. Yet.

“There’s only one Vegas in the world. Let’s make it special.”

Odom, 46, was officially introduced as the UNLV coach Wednesday in the Grand Hall of the Richard Tam Alumni Center. He was joined by UNLV president Keith Whitfield and athletic director Erick Harper.He spoke to an assorted crowd of media members, university representatives, current players, and some of Odom’s friends and family about his goals and expectations for the program.

“I knew what I thought this program could be,” Odom said. “I wanted to be considered for the opening.”

It’s been a busy 48 hours for Odom. He was hired Tuesday to replace Marcus Arroyo, who was dismissed Nov. 28 after his teams went 7-23 during his three-year tenure.

Odom signed a five-year contract with a starting salary of $1.75 million. It increases by $250,000 in 2025 and again in 2027 while also including bonuses for reaching the Mountain West championship game, winning the conference title game, bowl berths, a top-25 ranking and winning Mountain West coach of the year.

UNLV currently has $1.7 million to pay for assistant coaches, but Harper said it’s a ballpark number which can move up or down. Odom said hiring a coaching staff is his highest priority, and he is already meeting with current staff and hearing from people interested in joining him at UNLV.

“We will find coaches that want to be here, that are determined to have success,” Odom said. “(Coaches) that are great teachers, great leaders, great mentors.”

Odom met with the players Tuesday afternoon and preached building on the foundation Arroyo had put in place — the Rebels went 5-7 in 2022 after going 2-16 during the 2020 and 2021 seasons. He reiterated the message Wednesday.

Odom promised to place an emphasis on recruiting high school players instead of hunting the transfer portal. He also wants to make UNLV a destination for prep athletes in Southern Nevada.

Odom doesn’t have any apparent West Coast ties, but Harper believes recruiting is a skill which can travel.

Harper was a large part of Odom’s desire to come to UNLV. The pair met in 2008 when Harper was director of football operations at Arizona. Harper met Odom’s brother and was subsequently introduced to his future football coach.

They kept in contact throughout the years and were excited for the chance to work together, though Harper admitted the search was a “grueling” experience, without going into specifics.

“Some sleepless nights,” Harper said. “But at the same time it was a process we had to do in a way that we made sure we got the right person at the right time for UNLV.”