He is the first player to commit to the Rebels since coach Marcus Arroyo took over, though defensive end Adam Plant Jr. (6-5, 264) is transferring from Texas Christian.

Eleven other players previously announced they had committed to UNLV, and all appear to still be part of this year’s class.

“This 2020 Class is about to be something special!” Williams tweeted.

Also, cornerback Jordan Blakely (6-1, 185) is transferring to UNLV from Air Force. He joined the academy last year but did not play.

The translucent roof of Las Vegas’ Allegiant Stadium — a signature feature of the $2 billion, 65,000-seat football palace — initially was scheduled for completion by fall.

Hansen has been at Stanford the past six seasons and was a defensive assistant for the Cardinal in 2009-10 working under Vic Fangio, now the Denver Broncos’ coach.

Geoconda Arguello-Kline missed being appointed to the Las Vegas Stadium Authority last month, but Gov. Steve Sisolak put her on the board Monday. 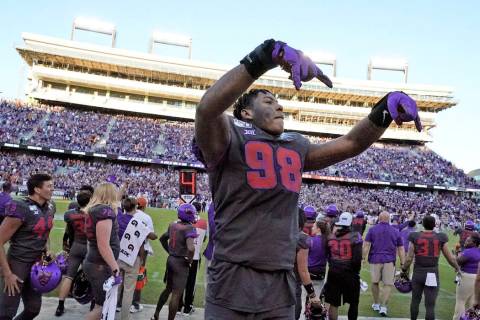 Adam Plant Jr., a Bishop Gorman High School graduate who recently transferred out of Texas Christian, said Friday that he intends to sign with UNLV.