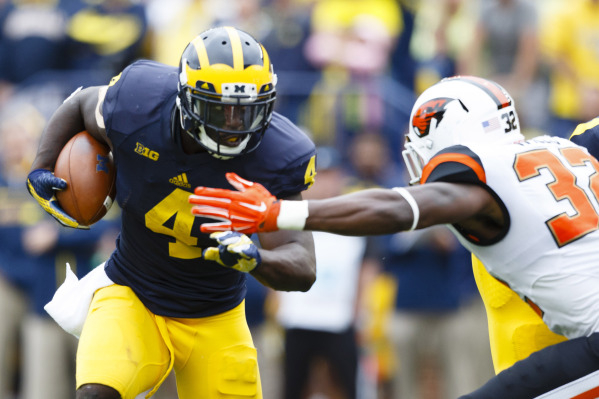 Blake Decker might be healthy enough to play for UNLV, but he probably shouldn’t. The Rebels need him for the rest of the season, not this game. Michigan’s Jake Rudock, an Iowa transfer, has done a solid job but also has thrown four interceptions.

The Rebels are quietly getting it done on the ground, averaging 172.5 yards per game. Michigan comes in at 150.5, but De’Veon Smith (173 yards in two games) will be the best back on the field.

Amara Darboh and Jake Butt each has 12 catches for the Wolverines, but it drops off considerably after that. UNLV has talented receivers, but the question is whether the Rebels have the quarterback to get them the ball. That’s not their fault, though.

The Wolverines are still trying to find their way up front, but so is UNLV. Usually, it’s wise to give this category to the Big Ten Conference team, and Michigan is more experienced.

No one can block Michigan’s Chris Wormley, who already has six tackles for loss. The Rebels’ line has played well, especially in the first half before lack of depth has become a problem.

Michigan is strong across the board from Joe Bolden to Desmond Morgan to James Ross. Hard for UNLV or any school to match up.

The biggest surprise from last Saturday’s game against UCLA was how well UNLV’s secondary played. Michigan has made its share of changes, and questions still remain, but the Wolverines allow only 144.5 yards passing per game.

Hard to argue with the job the Rebels have done through two games. Michigan’s is comparable, but UNLV is just a little ahead.

All the pressure is on Michigan. The game will be considered a disappointment for the Wolverines if they don’t by win by at least five touchdowns. UNLV got the awe factor out of its system by visiting Michigan Stadium on Friday.

Bruce Marshall (goldsheet.com): Michigan 41, UNLV 6 — UNLV’s brutal early-season schedule is taking a physical toll. The possible absence of gunslinger quarterback Blake Decker (hamstring/groin versus UCLA) is like Teller without Penn for the Rebels’ offense, as backup Kurt Palandech is severely limited. Lesser opposition is allowing Jim Harbaugh’s offense and Jake Rudock to continue working out the kinks while what appears to be a much-upgraded Wolverine defense (held Oregon State to 138 yards) shuts the gate on another outmanned foe.