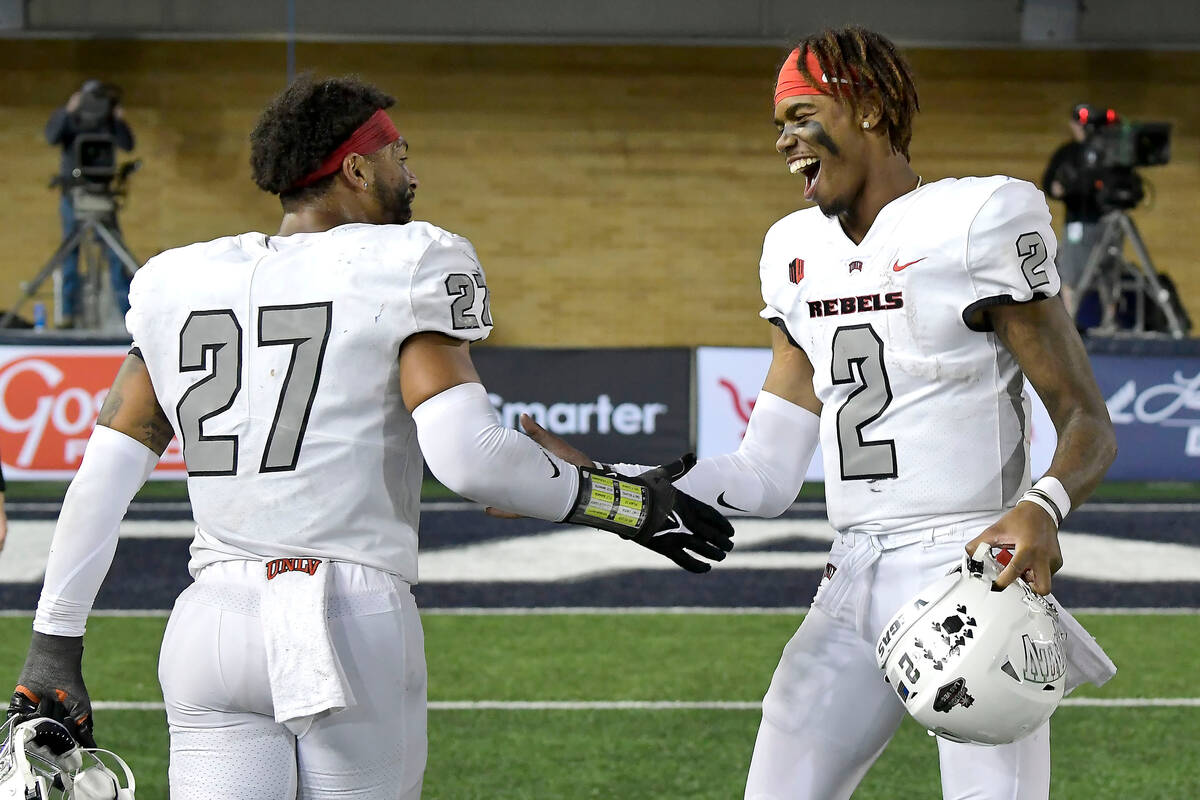 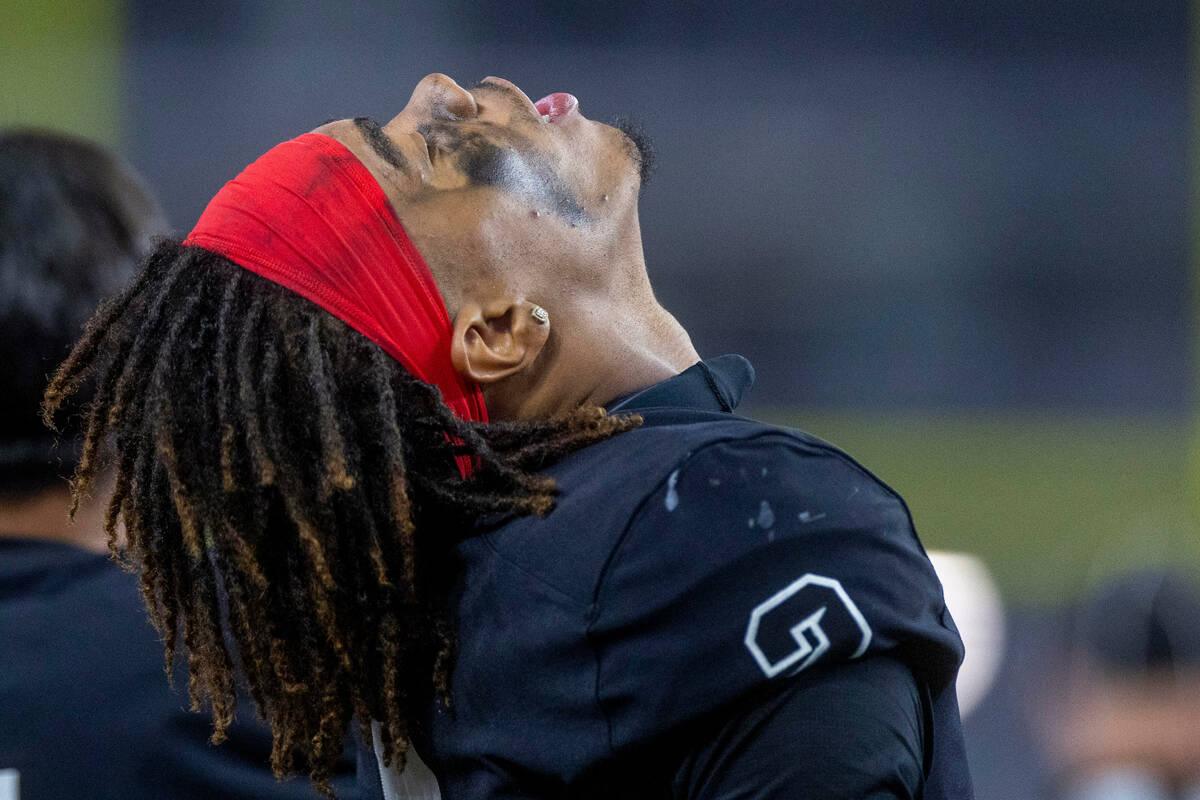 UNLV Rebels quarterback Doug Brumfield (2) throws his head back on the sidelines the Fresno State Bulldogs during the second half of their NCAA football game at Allegiant Stadium on Friday, Nov. 11, 2022, in Las Vegas. (L.E. Baskow/Las Vegas Review-Journal) @Left_Eye_Image 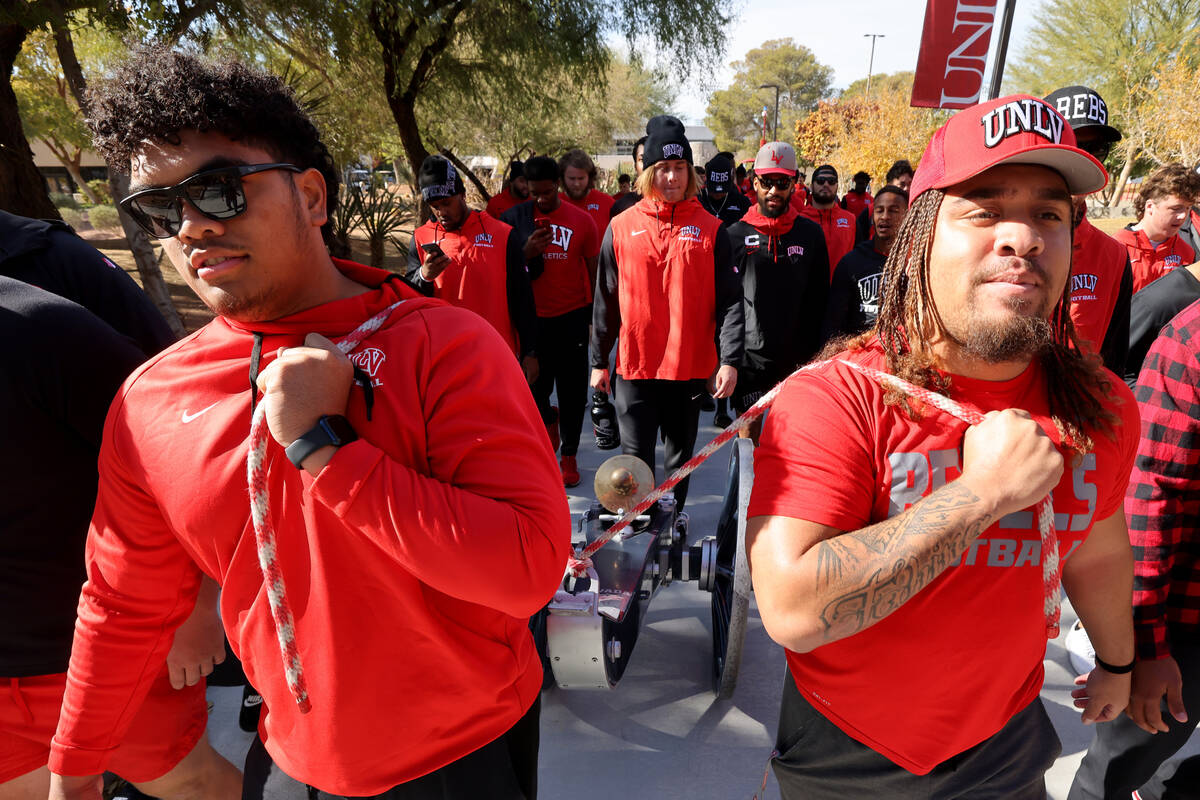 UNLV quarterback Doug Brumfield is trying to be patient as he navigates a coaching change.

“I’m just seeing what they do, letting the whole process play itself out,” he said of Tuesday’s decision to hire former Missouri coach Barry Odom to replace Marcus Arroyo. “Nothing I can really do.”

Brumfield was among the UNLV players who gathered during the late afternoon Tuesday at the Fertitta Practice Facility at Rebel Park to meet Odom.

“He seems like a real genuine, caring person,” Brumfield said. “So we’ll see.”

It’s been a whirlwind end to the season for most of the players, who experienced the highs of a rivalry win and the lows of a coach firing and missing out on a bowl bid in the span of less than two weeks.

Senior defensive lineman Naki Fahina said many players still feel blindsided by the decision to move on from Arroyo Nov. 28, but was intrigued by Odom after hearing him speak to the team Tuesday.

Fahina said he was curious about the new coach’s priorities and his vision for returning players. Brumfield also wanted to hear about Odom’s plans for anyone interested in coming back to UNLV.

Both said the the former Arkansas defensive coordinator came across as considerate and willing to invest in the players who are already there.

“He’s a players’ coach, for sure,” Fahina said. “And a very strong family coach. One thing he was preaching was his family is our family. We’re all one big family.”

Added Brumfield: “A big message that he was saying was that he wanted us to all feel our worth, to feel valued, that he actually cares about us. So that was big.”

Fahina, like many of the veteran players on this UNLV squad, has already been through a coaching change. He’d just completed his freshman year when former UNLV coach Tony Sanchez was fired to bring in Arroyo after the 2019 season.

The defensive lineman said it puts players in a difficult position, but it taught him how to adapt to new surroundings and situations. Fahina still wants to see how the offseason plays out — who Odom brings in as assistants, how the program will run and other factors — but said Tuesday was a good first step.

“He’s fired up. He’s ready to go,” Fahina said. “We’re ready to go out there and work. That’s the number one priority right now.”

Defensive back Cameron Oliver was also cautiously optimistic about the former Missouri coach’s arrival. The sophomore from Texas said his friend, Tigers’ defensive end Arden Walker, was recruited by Odom at Missouri, and spoke highly of him.

Oliver is also interested in playing for a coach with a defensive background, something he’s never done. And the defensive back was glad to hear Odom say he wanted to build off the past season, not necessarily tear everything down and start over, acknowledging the progress UNLV made during the 2022 season.

However, the question for many players will be whether they decide to stick around and see out Odom’s process. Starting wide receiver Kyle Williams and starting cornerback Nohl Williams both elected to enter the transfer portal Monday.

Oliver and Brumfield said the coaching change has been an emotional experience, and they understand players have to make the best decisions for themselves.

“It’s really just a hard time for a lot of guys, just to make decisions at a young age like this,” Brumfield said. “But I feel like we’re on the right path right now.”