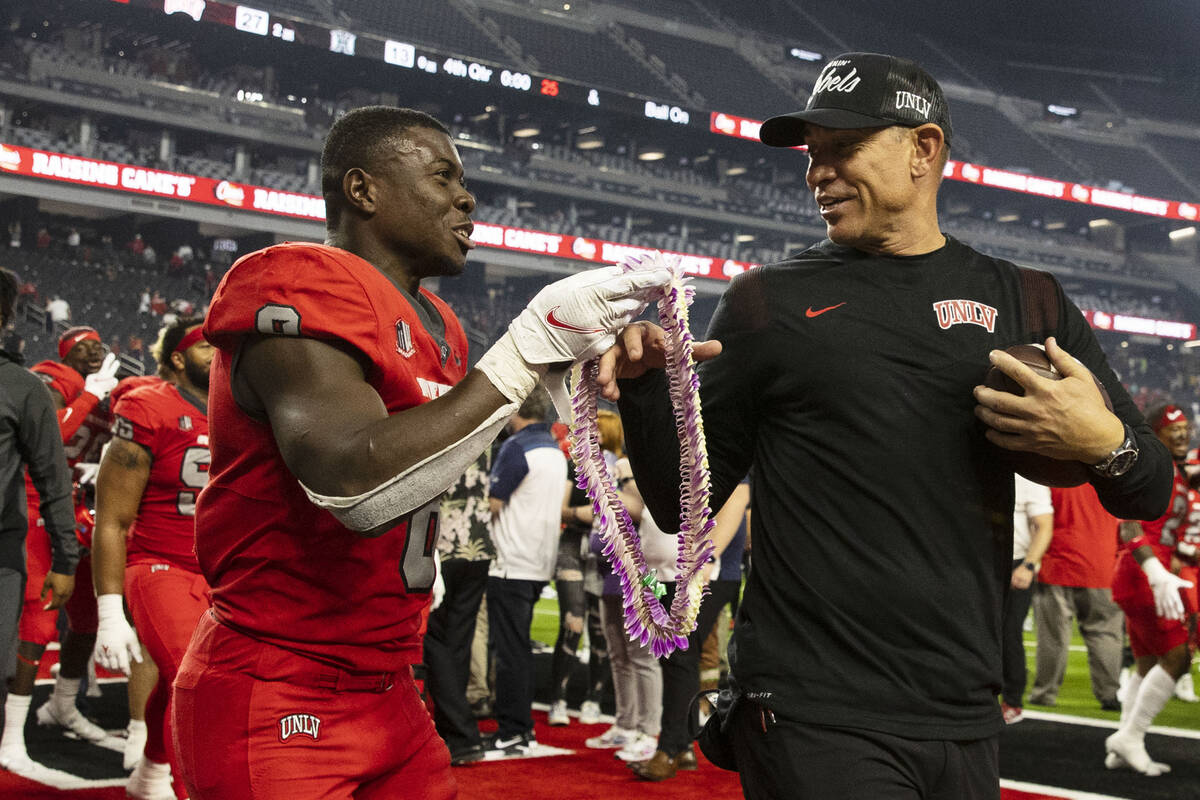 UNLV senior running back Charles Williams took a moment Monday morning to reflect on the personal significance of the last six seasons. On what Friday night — senior night — is going to mean to him.

“It’s been a lot of ups and downs, but this team has stuck together, stayed united,” said Williams, the program’s all-time leading rusher and the active career leader in rushing yards among FBS players.

For one final game in Las Vegas.

The Rebels (2-8, 2-4 Mountain West) will honor their seniors Friday against No. 19 San Diego State (9-1, 5-1) at Allegiant Stadium. There are 24 on this year’s roster, and they want to conclude their college careers with a third consecutive win after helping UNLV beat New Mexico and Hawaii in successive weeks following a 14-game losing streak.

“We want to put on for these young dudes,” said Williams, who received a medical redshirt and an additional year of eligibility because of COVID-19. “They’re trying to send us off right, but we’ve got to our part, too, as seniors.”

The senior class has helped set the tone for coach Marcus Arroyo’s rebuild, enduring two arduous years that have resulted in only two victories. The coach that recruited many of them, Tony Sanchez, was dismissed at the end of the 2019 season. And their first season under Arroyo was marred by complications from the COVID-19 pandemic.

They couldn’t meet the way they were accustomed to meeting. Couldn’t so much as practice normally amid the guidelines and restrictions the pandemic put in place.

Their home games last season featured too few fans to make a noticeable difference. The 14-game losing streak was humbling and motivating.

Arroyo said Monday that he’s “humbled by this group” and added that he coached the seniors with a sense of “humility and understanding” regarding what they’ve endured during their time in the program.

“Their ability to identify with what we’re doing and to carry the flag as a group is important,” Arroyo said. “It’s important to the program.”

The seniors have carried that proverbial flag with pride, competing with passion throughout of the course of the season, even when things weren’t going the Rebels way.

They lost five games by one score and were blown out by rival UNR in their final opportunity to recapture the Fremont Cannon.

The two victories serve to validate their commitment to the program. A victory over San Diego State could alter its trajectory.

“It’s everyone’s last home game, knowing that we’ve got to go all out and just send everyone off the right way,” said senior linebacker Kylan Wilborn, a graduate transfer who played previously at Arizona.

“Even for the younger guys, this leads more to momentum into the following seasons. Which will lead to a good spring ball, a good fall camp and even into next season. … It’s all about setting the tone.”