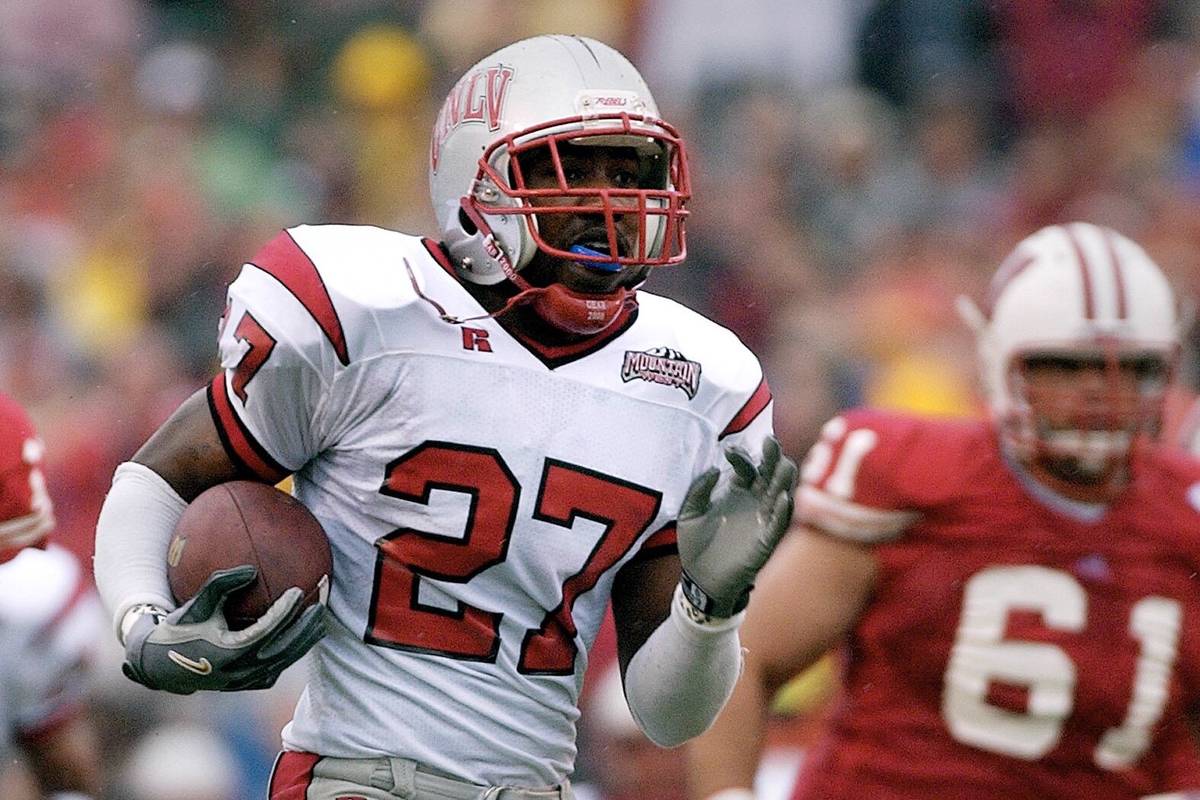 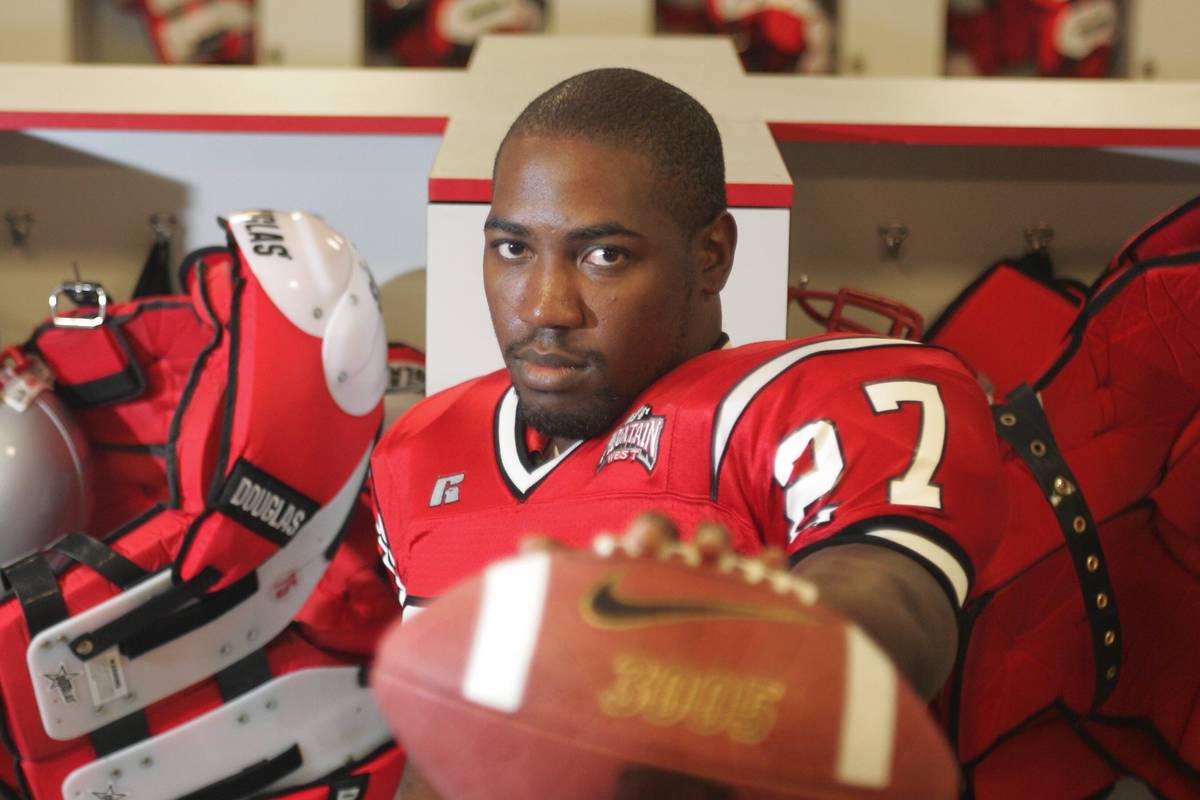 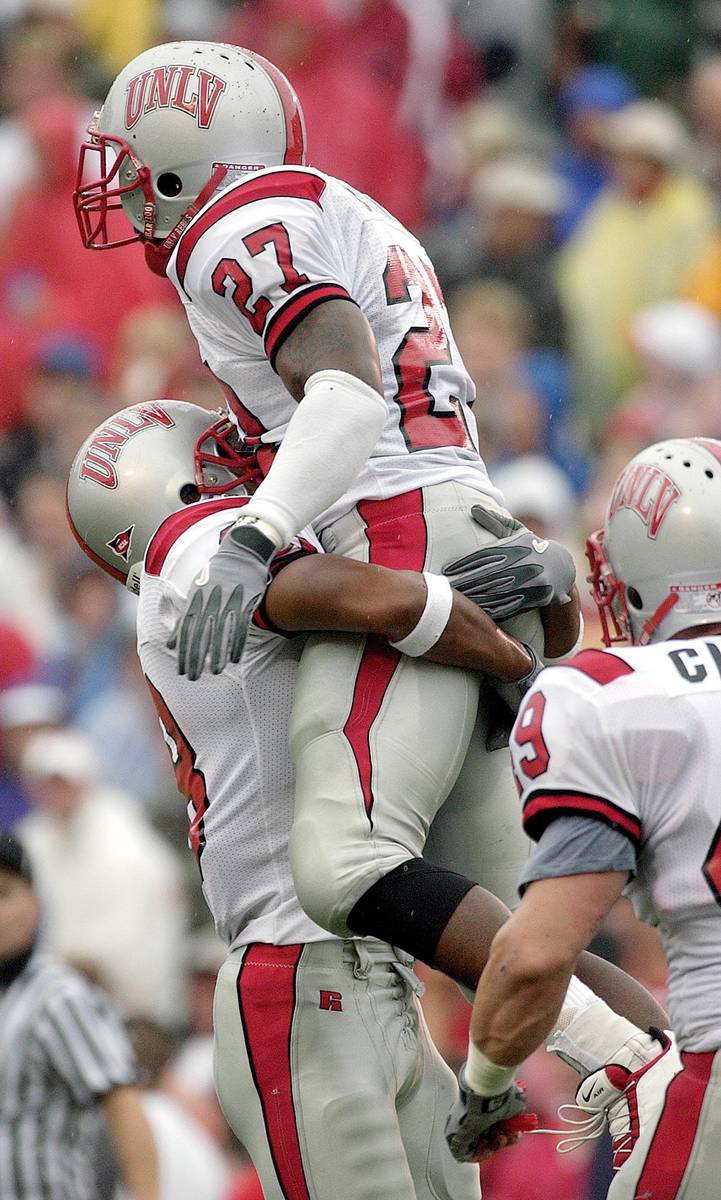 UNLV's Jamaal Brimmer (27) leaps into the arms of teammate Will Togoai after running back a fumble 55 yards for a touchdown in the first half against Wisconsin Saturday, Sept. 13, 2003, in Madison, Wis. UNLV upset No. 14 Wisconsin 23-5. (AP Photo/Morry Gash) MORRY GASH

Jamaal Brimmer’s play made him a magnet of attention, but he never felt comfortable being singled out from his teammates.

He played with other outstanding defenders from 2001 to 2004 at UNLV, but even now Brimmer is remembered for performances that were so singular in a team sport.

Being a team-first player was highly appreciated in the locker room, and his humility helped lead to lasting friendships. That’s the approach Brimmer, a Durango High School graduate, now maintains as the second-year defensive backs coach at Bishop Gorman.

“This generation of egos is all about social media,” said Brimmer, 38. “Back then we didn’t have as much social media, so it was all about trying to control your ego and trying not to feel like you were bigger than the team, feel like you were better than the team. When I got there (at UNLV), I wasn’t a starter. I had to try to earn my way to start, and I tried to keep that same mentality without listening to everyone say that it was all about me.”

Brimmer, a safety, earned All-America honors each of his final two seasons and was named Mountain West Defensive Player of the Year in 2002 and 2003. He led the conference in 2002 with 17 tackles for loss, and the following season, Brimmer topped the Mountain West with six interceptions and four forced fumbles.

UNLV inducted him into its Hall of Fame in 2017.

He played at a time when the Rebels — unlike over the better part of the past decade — put some quality defenses on the field. The 2003 team allowed 22.7 points per game, and no UNLV defense has allowed a lower average since.

Brimmer knew the defense didn’t rest completely on his shoulders, but by the time he was done, he was arguably the greatest safety in school history.

He unquestionably had the greatest individual defensive performance.

That occurred in 2003 when the Rebels traveled to No. 14 Wisconsin and dominated in a nonstop downpour to win 23-5. Brimmer returned a fumble 55 yards for a touchdown, recorded 11 tackles, had two sacks, intercepted two passes and forced a fumble.

He was named the National Defensive Player of the Week by the Football Writers Association of America, but true to form even now credits everyone else.

“It was crazy as a team how we came together that week because no one gave us a chance to win,” Brimmer said. “Then we looked at the conditions of the game and how it rained and slowed down the pace, and we really took the crowd out of the game.”

He has been back in football for almost 10 years, joining the staffs at Faith Lutheran and Canyon Springs before moving over to the prep power that is Bishop Gorman.

“I’m trying to learn and where I need to improve as a coach,” Brimmer said.