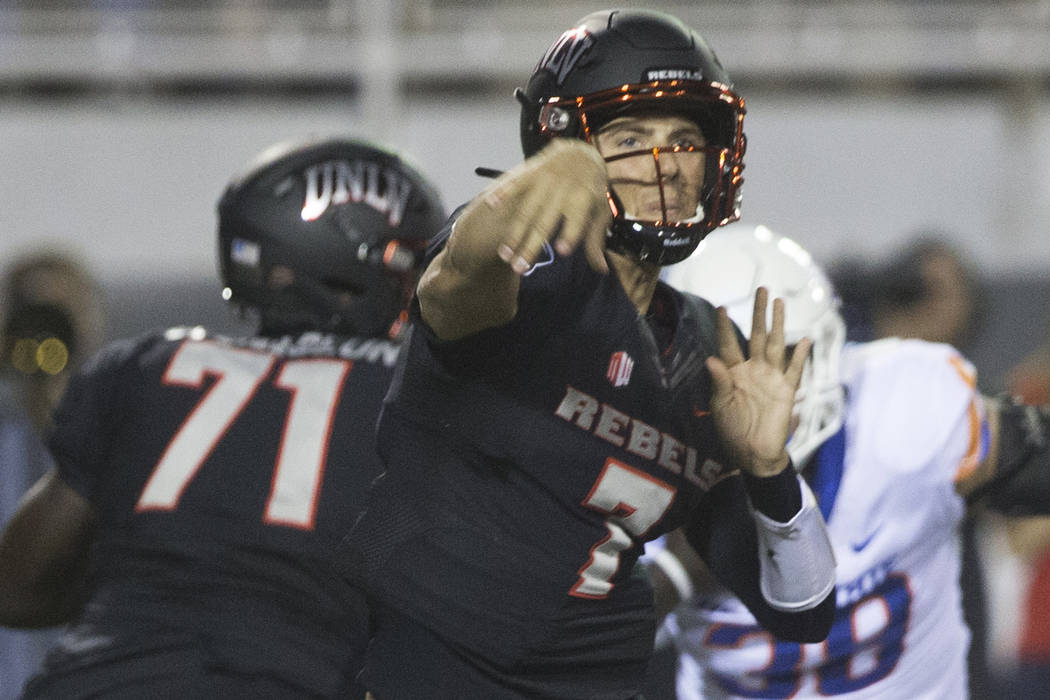 If UNLV could ever use a running quarterback, it’s for Saturday’s 1 p.m. nonconference game at Vanderbilt.

But UNLV quarterback Armani Rogers’ availability is very much in question when the Rebels (1-4) visit the equally struggling Commodores (1-4). He didn’t play in Saturday’s 38-13 loss to now No. 14 Boise State because of a sprained knee.

Rogers, who holds UNLV’s career rushing record for a quarterback with 1,549 yards, is listed as sharing second team with Max Gilliam. Sanchez is hopeful Rogers’ knee improves enough to play against Vanderbilt, but Kenyon Oblad will start for the second game in a row.

Oblad, who went to Liberty High School, completed 24 of 55 passes for 262 yards and both UNLV touchdowns against Boise State. He was intercepted once.

“We’ve got to see where (Rogers is) at,” Sanchez said. “When we’re game-planning with Armani in there, there are some wrinkles that we wouldn’t do with Kenyon and vice versa based on skill set. Max is kind of the odd ball because Max can run. He’s shown that he’s a pretty good read-zone guy. He doesn’t quite have the arm strength Kenyon does, but he’s pretty savvy.”

Sanchez lamented the many missed opportunities the Rebels had against Boise State, pointing to specific plays that would have extended drives and possibly changed the game’s complexion.

But Sanchez was more subdued than he was minutes after the game, in which he said “there are some hard conversations we’re going to have to have in the staff room about some of the things we’re going to do …”

“I think all coaches are like this, you go into a press conference right after a game, you’re frustrated, you’re talking about the things you think you saw,” Sanchez said Monday. “Then you watch the film, and you get a lot more clarity.”

Sanchez said offensive coordinator Garin Justice will continue to call the plays. Justice took over when Barney Cotton left in July because he needs a heart transplant.

“Garin Justice is a darn good football coach,” Sanchez said. “He’s done a good job in a tough situation. Getting told you’re going to call the plays in mid-July and everyone’s on vacation … I think he’s handled it well. We’ve got to execute better, and obviously we’ve got to do a better job of putting guys in the right positions, but we’re all working hard on that.”