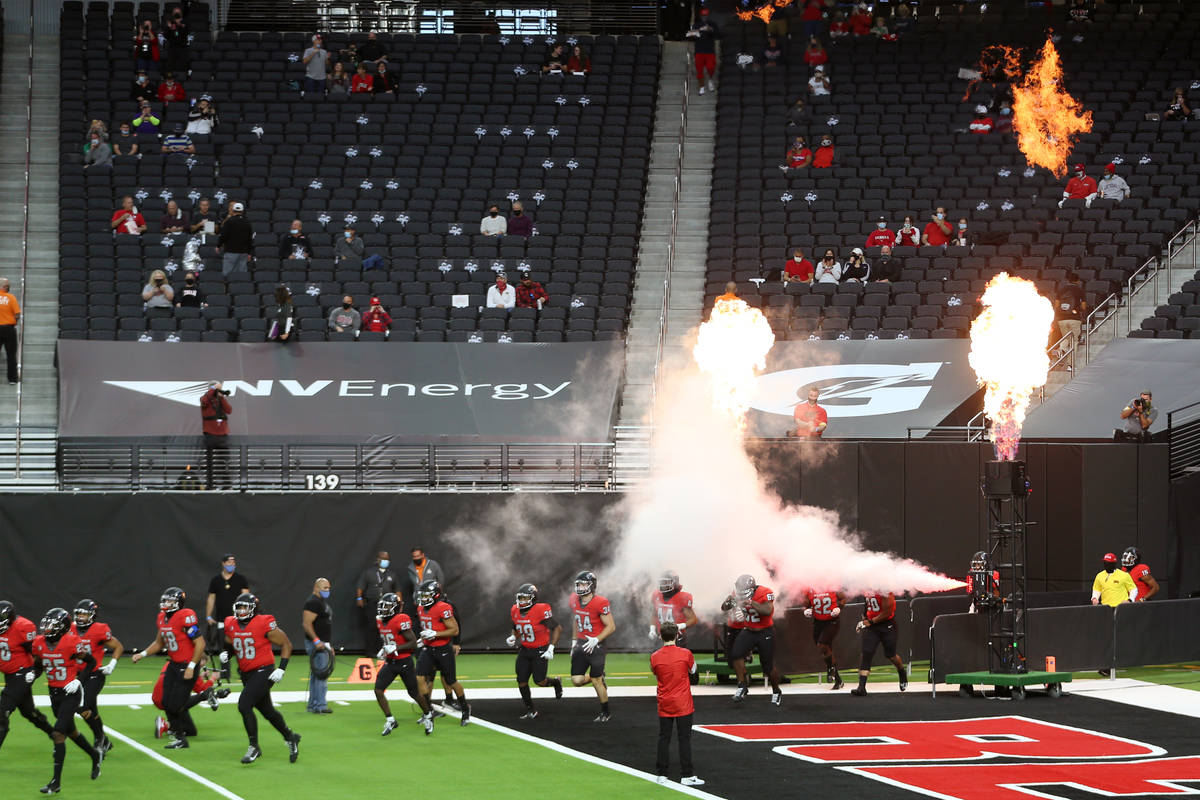 Fans are surrounded by cardboard cut outs in the stands before the first half of the UNLV Rebels versus the Nevada Wolf Pack NCAA football game at Allegiant Stadium on Saturday, Oct. 31, 2020, in Las Vegas. L.E. Baskow/Las Vegas Review-Journal) @Left_Eye_Images

UNLV is nearing its fundraising goal meant to help offset the financial impact of the COVID-19 pandemic.

The Momentum Fund surpassed the $1 million mark Wednesday, with $500,000 left to meet the goal of $1.5 million by the end of the year, the university announced.

The funds will be used to relieve the financial stress mainly created by having little to no fans at most UNLV football games and basketball games.

“We feel so very fortunate to benefit from lasting friendships that have only grown in strength and impact during this most challenging period,” UNLV athletic director Desiree Reed-Francois said in a statement. “Instead of retreating, our Rebel Athletic Fund community has maintained and accelerated our advancement. We have seen life-changing generosity over the past several months, and our gratitude is truly boundless.”

UNLV hosted 2,000 fans at its first two home games at the 65,000-seat capacity Allegiant Stadium, but announced last month it would not allow fans at the stadium for its final two home games and for men’s and women’s basketball games at the Thomas & Mack Center and Cox Pavilion for at least the start of the season.

A $500,000 gift in the fall to UNLV athletics by a longtime supporter, the John C. Kish Foundation, was a big lift to the Momentum Fund, which launched in August.

“I grew up in a very athletic-centered lifestyle,” Kish Foundation executive director Matthew Frazier said in a statement. “Balancing athletics and education has enabled me to be who I have become today. Being blessed to have a job centered on giving back to the community is something I take very seriously. It is essential to the Las Vegas community during this time of uncertainty.”

Last week saw $100,000 raised on Giving Tuesday. UNLV enticed its fundraising pitch by offering a chance to win a limited edition Rebels hat that has been garnering attention when football coach Marcus Arroyo has worn it during televised games.

Also, to help generate money for the Momentum Fund, UNLV has been selling fan cutouts that were placed at Allegiant Stadium for football games and are being placed at the Thomas & Mack for basketball games.