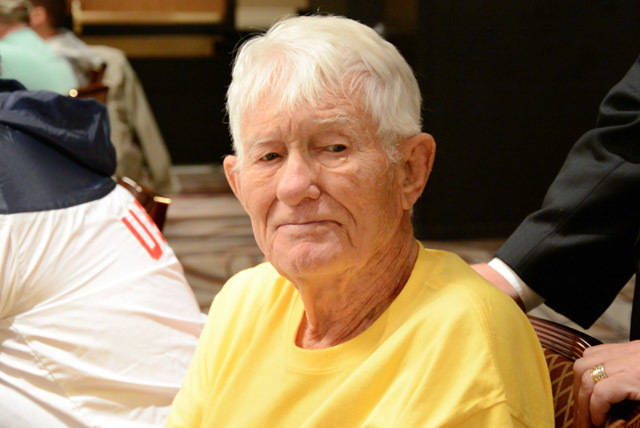 Russ Moncrief, 91, of Orlando, Fla., the oldest player in the field of more than 4,400 for the Seniors Event. (Courtesy WSOP)

The Seniors Event at the World Series of Poker started in 2001 with a modest 340 entrants.

A few more than that turned up Friday at the Rio Convention Center for the $1,000 Seniors No-Limit Hold’em Championship.

The seniors’ tournament, which is open to players ages 50 and older, drew more than 4,400 entrants and is the third showcase event to attract a record field during the first 11 days of the WSOP.

The $1,000 buy-in Pot-Limit Omaha (May 28 to 30) set a record for a non Hold’em event with 1,128 entrants, and the $1,500 buy-in “Millionaire Maker” tournament that ended early Wednesday had 7,977 entrants. Every available poker table at the Rio Convention Center was in use during the opening day of the “Millionaire Maker,” which was the second-largest field in WSOP history behind only the 2006 Main Event.

“It’s the best opening stretch in the 45-year history of the WSOP, which should only help build momentum towards a huge Main Event,” WSOP executive director Ty Stewart said.

The early buzz surrounding the WSOP is due at least in part to the schedule, which thus far has featured several $1,000 and $1,500 buy-in Hold’em events along with larger buy-ins guaranteed to have more star power.

“The modern era WSOP isn’t so much about poker tournaments anymore,” Stewart said. “It’s become something more. It’s become the chance to be part of something, and live out your high-roller fantasies, some for a day, some for a lifetime.”

Of course, it doesn’t hurt that some high-profile players have been in contention for bracelets so far. Phil Hellmuth fell short of his record 14th bracelet when he finished second in the $1,500 buy-in Seven Card Razz tournament on Sunday. Daniel Negreanu was denied his seventh career bracelet Thursday as he finished second to Paul Volpe in the $10,000 buy-in No-Limit 2-7 Draw Lowball.

Justin Bonomo won the $1,500 Six-Handed No Limit Hold’em event Wednesday, and can no longer appear on a Buzzfeed “Best Player to Never Win a Bracelet” list. Coupled with his second-place finish in the $10,000 Limit 2-7 Triple Draw Lowball last week, Bonomo is currently atop the WSOP Player of the Year standings.

Even the side games at the Rio have seen plenty of action, according to Seth Palansky, vice president of corporate communications for Caesars Interactive Entertainment. The daily $235 buy-in deep-stack tournament had a record 1,736 entries this week, and there are more than 100 cash-game tables going, another record.

The WSOP attracted 79,471 participants in 2013, its most ever, and appears to be on pace to surpass that number this year.

“We have built it,” Stewart said, “and they have come.”