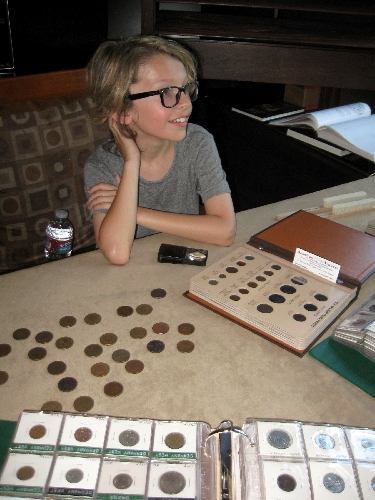 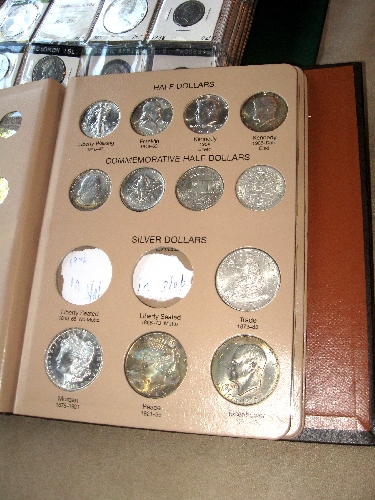 Not many 10-year-olds are numismatists, and not many even know what the word means. But Chad Nevins is not your typical 10-year-old.

Numismatics is the study or collection of currency, including coins. In June, Chad, a Summerlin-area resident, won the Bill Fivaz Young Numismatist Literary Award for ages 8 to 12. The national contest was sponsored by the American Numismatic Association, the largest coin collecting organization in America.

“I used to collect toys,” he said. “But then I realized they’re not worth anything, and toys are pretty much like junk. It’s better to collect something that’s going to be worth something someday.”

Chad’s winning essay began as a school project at the Adelson Educational Campus, 9700 W. Hillpointe Road, where he will be a fifth-grader in the fall. For the assignment, each student pulled a name from a box, which determined the character they would write as. They then had to write correspondence that person might have sent to family as they emigrated to America.

Chad’s entry, “How I Found Freedom with a Pocket Full of Change,” was written from the perspective of a 20-year-old Polish woman leaving Europe circa World War II who writes to her grandfather, a coin collector. Chad incorporated his knowledge of coins. A portion reads:

“Right before boarding the ship I spotted a shiny coin on the floor. I picked it up and examined it. It is a 1865 Napoleon III coin. I am reminded that even a powerful leader like Napoleon could be defeated. He was defeated because his empire became too big. By losing Haiti, and fighting the Battle of the Pyramids in Egypt, his empire was defeated. This made me think about you and how Hitler will be defeated.”

The essay turned out so well, Chad’s parents submitted it to a magazine, “The Young Numismatist,” for consideration. The editor knew of the national numismatic contest, which led to entering Chad’s essay and his win.

Collecting coins is something Chad enjoys with his father, Russell, an orthopedic surgeon and chief of surgery at Spring Valley Hospital Medical Center.

Chad has been collecting coins for about 2½ years and estimated he owns roughly 2,000. The library at the Nevins’ home is filled with binders for organizing them. A long table has a covered pad for laying out loose ones, and a magnifying glass and cleaning brush are nearby.

“It is so cool to think how old these coins are and think somebody back then (held this),” his mother, Trudi, said.

Gresser met and began advising Chad about 2½ years ago, starting him with “type” coins. There were six different types of dimes made during the 1800s, for example, so collecting by type would mean acquiring one of each style. Upon meeting Chad, he said he knew the boy had superior intelligence. He gave Chad books to read and quizzed him the next time they met.

“He grasps everything with little effort,” Gresser said. “He’s just terrific, all smiles, and a kid who wants to learn. I wish there were more kids like him in this world.”

At a numismatic convention last year in Portland, Ore., Chad’s personality and understanding of coin history charmed many of the adults manning booths there. For the auction portion, he was made guest auctioneer and took bids on a half penny. It sold for $850.

Most of Chad’s coins were bought at far less than that, around $30, but he does have one valued as high as $15,000. It is a 1793 Liberty Cap, the third type of one-cent pieces made by the U.S. Mint in Philadelphia.

Part of his collection includes a couple of the first American pennies ­- the first Chain cent and the second Wreath cent made.

Another of his interesting coins is from the World War II era, a Lincoln head penny from 1943. It’s made of steel.

“That year, they needed the bronze for the war, so they used steel instead,” Chad said.

He normally buys single American coins and is particularly interested in ones from 1793 to 1857. During that period, large cents were made. They were literally large in comparison to today’s issued coinage.

“A lot of them are really rare, and they have a lot of history behind them,” Chad said. “The dies kept breaking, so with each coin, you might see something different.”

Differences included the hair looking different or the numbers touching the artwork. On some, the numbers are bigger. Other coins are interesting because they have toning, an imperfection due to a form of oxidation.

Chad owns a Buffalo nickel with a three-legged buffalo. He also has a Mercury dime with “21” stamped over “41” where the year appears. Then there is a coin that was struck twice, leaving a ghost impression.

Not all his time is taken up with coins. His father called him well-rounded, a child who enjoys “football, soccer, surfing and off-roading. But mostly, Chad enjoys just being a typical 10-year-old kid.”

Chad said that, unlike toys, he plans to collect coins far into the future.