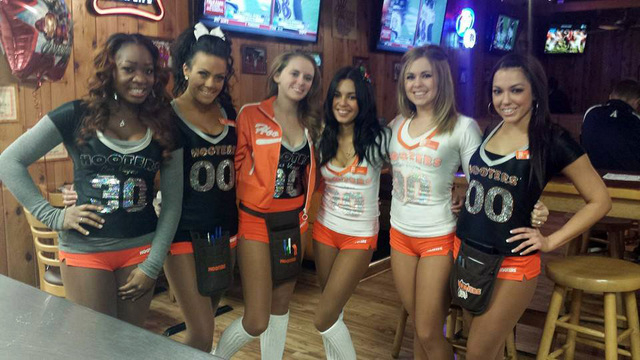 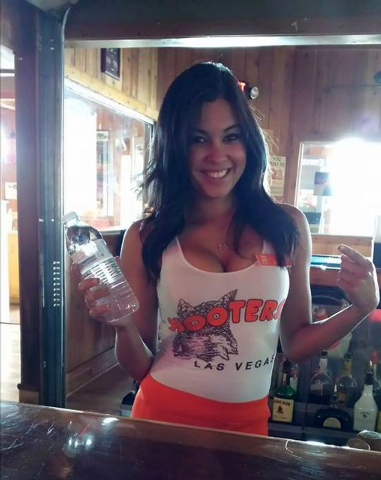 Jonny Cabral is a bartender at Hooters in Spring Valley. (Courtesy, Jonny Cabral/Facebook)

When you walk into the Hooters in Spring Valley on a night where Jonny Cabral is working, the first thing you’re going to hear is her laugh.

As soon as she walks away from a group of middle aged patrons she introduces as “the guys” in the brightly lit bar and restaurant, they carry on about how she’s “the biggest sweetheart in here” and “is a perfect bartender.” Other regular patrons will make comments about her appearance, but usually it’s nothing out of line for the Hooters Girl.

The restaurant, advertised and reinforced as being family friendly, is known for their image of — what some call oversexualized — “Hooters Girls.” Their female employees are known for their bubbly cheerleader attitudes and their revealing outfits of low-cut, logo-bearing tank tops and high-waisted, very short shorts.

“You have to wear the uniform,” says Cabral, “and they say it’s not a show, but you have to treat it that way. You have to be comfortable taking pictures and being in the outfit. But you do not have to act overly sexual.”

Their regular customer is just about exactly who you would expect, and looking around the Spring Valley location on an average weekday, you’ll find him — the middle aged man.

Cabral takes caring about her regulars seriously, and she’s made friends out of many of them. Cabral says she’s even driven home regulars who were too drunk to drive. “It’s a ‘you’re taking care of me, I’m taking care of you,’ kind of deal.”

The company is known for a dress code that’s more extreme than those of many restaurants. Having a hole in their nylons, or wearing hair ties, bobby pins and dark-colored bras are grounds for being reprimanded or fired. Due to policies like this, many Hooters across the country have a high turnover rate.

Cabral’s been waitressing there for about 18 months and for the last six months has been bartending.

There have been accusations of the restaurant being an insult to women’s rights and family values.

In 2010, the National Organization of Women filed complaints against Hooters for violating California law stating they were “advertising an adult business to children.”

The women’s group went after Hooters again in 2011, after an English chain gave a 12-year-old boy cake which appeared to be of large, nude breasts, which NOW argued was “sexualized Hooters merchandise.”

In the midst of these legal accusations, Salon.com ran a piece stating, “I’ve always been of the mind that strip clubs — which sell sex appeal straight-up — are preferable to Hooter’s brand of cowardly, snickering objectification of women,” and mentions one of the few sexual harassment lawsuits that Hooters has faced.

In the Kentucky lawsuit, a woman was awarded $275,000 in damages after she claimed “she was the target of unwanted sexual advances, demeaning behavior and recrimination from managers.”

Cabral says her job isn’t unlike most bartending jobs in Las Vegas, though.

There are two Hooters locations in town. The Spring Valley location at 7155 S Rainbow Blvd and the casino-hotel — the only one for Hooters in the world — on East Tropicana Avenue.

The casino-hotel, which until recently was struggling financially, is a completely different ballgame than the restaurant, and is operated under different standards.

The Hooters Girls are a common standard, but the casino sees many, many tourists and rarely sees locals.

“It is more of a show in the casino than I feel like it is at a regular Hooters. We were never going to see those people again so we might as well try to get their money. Sure, we might have totally flirted a little harder than we were told to,” says Jessica Lander. She worked briefly at the casino-hotel and currently works at a southern California neighborhood location. “Plus, we would have girls from the calendar working there, and guys expected a little more from them.”

“The only problem I had working here,” said Jessica, “was when I realized that no matter what body type you have, those shorts are gonna give you a camel toe.” She laughs as she “praises the Lord” for the waitress pouches.

Both Cabral and Lander say in the time they’ve worked for Hooters, they haven’t had any serious problem customers. Maybe an instance of grabby hands that grabbed too far, but nothing that couldn’t be dealt with.

“I think the worst part of my job is how people react to it, even though I’m literally just a waitress. I’m not dancing on a pole or showing my lady-parts for cash,” said Jessica.

The tips at Hooters, as you might suspect, are a bit higher than regular bar-restaurant jobs, and Cabral says she lives a little more comfortably now than when she was a valet. The job has allowed her to afford a car payment and to rent a house.

“In the end, my favorite days are the ones where my friends come in,” says Cabral, “when they come in and they’re just relaxed, drinking, having a great time. Those are the best nights.”