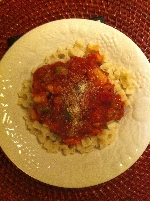 PICK OF THE WEEK:

If you liked Il Vino, you’re going to love this new incarnation that had the foresight to keep many of the traditional Italian dishes that were so popular at Il Vino. Two house favorites are chicken cannelloni, chicken, spinach and ricotta-filled crepes baked with garlic cream sauce and three-cheese blend, and seafood linguini with shrimp, clams, mussels, calamari and salmon sautéed and finished with sun-dried tomato broth. Other entrees are chicken or eggplant Parmesan, lasagna, spaghetti Bolognese, veal scaloppini, linguini and clams, and thin-crust pizzas such as spinach and artichoke, margherita or make your own. Several appetizers are Caprese croutons (garlic croutons served with mozzarella, oven-roasted tomatoes and balsamic syrup), calamari fritti with marinara sauce and hot vinegar peppers, and insalata Italiana, mozzarella, artichokes, sun-dried tomatoes, garbanzo beans, tomato, olives, basil and roasted red peppers mixed with crispy lettuce and red wine vinaigrette. Meals can be paired with classic Italian sodas offered in 12 flavors, including blackberry, cherry lime and pomegranate. No meal is complete without a dessert such as Carnegie Deli’s famous cheesecake or Italian favorites such as tiramisu, gelato or cannoli. Entrees start at $9.99. Pasta Cucina opens daily at 5 p.m. — Jack Bulavsky