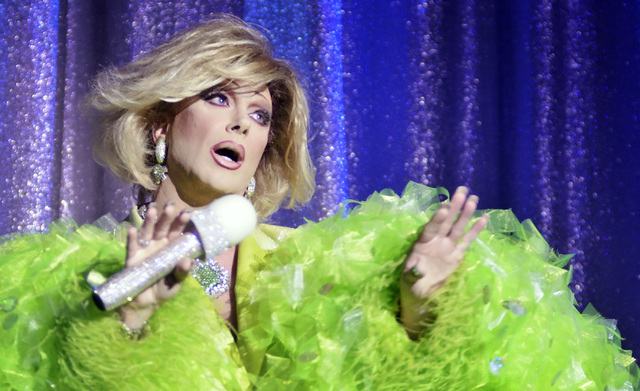 Female impersonator Frank Marino is taking his long-running diva act on the road.

“Divas Starring Frank Marino” will continue at The Quad, but “we’re doing a lot of outside gigs,” he said.

He has added five divas, including Shania Twain and Pink impersonators, and will launch a search to find a Miley Cyrus doppelganger.

“I’m going to divide the show so that people can come back and always see new characters,” Marino said.

Harrah’s Reno will be a six-week run from mid-February to the end of March.

Marino will open and have a fill-in do the rest.

Brian Griffiths, a former emcee at San Francisco’s legendary drag club Finocchio’s, will continue as an occasional fill-in for Marino.

Also subbing will be Gary Dee.

Marino had a 25-year run as the lead in “La Cage” at the Riviera before launching “Divas” three years ago.

He is enjoying a spike in popularity from recent appearances on reality shows “Millionaire Matchmaker” and “Toddlers and Tiaras,” along with “Fashion Police” with Joan Rivers, his drag persona.

Marino is being roasted Oct. 4 at the latest Showbiz Roast in the Stratosphere Theater.

Marino is the subject of my latest Q-and-A, a Friday fixture at NormClarke.com.

AND THE HONOREE IS …

Show business legend Florence Henderson will be “Woman of the Year” at the Nevada Ballet Theatre’s 30th anniversary of its Black and White Ball on Jan. 25 at Aria.

The gala will serve as the kickoff of Henderson’s 80th birthday celebration.

Her birthday is on Valentine’s Day.

Legendary drummer Bobby Morris, who worked for jazz icon Louis Prima and as Elvis Presley’s conductor, tells this story of a lost opportunity.

He was a member of the house band at the Last Frontier in the early 1950s when Liberace was pulling down a then jaw-dropping $1,000-a-week.

“He told me one evening that he was piloting a weekly TV show out of Hollywood and would like me to be his drummer,” recalled Morris.

Liberace’s show went national, and he became an international star.

When Liberace’s salary soared to $50,000 a week at the Riviera, Morris was invited to his opening night party.

When Morris offered congratulations, Liberace said, “You should have come with me , Bobby. I told you it would get better.”

The former Playboy Playmate of the Year-turned-burlesque star takes her whacks at 7 p.m.

Christine McGuire of the McGuire Sisters, having lunch with lady friends at Dom Demarco’s Pizzaria &Bar in Summerlin on Thursday. … Siegfried Fischbacher and Madison Hildebrand of Bravo’s “Million Dollar Listing,” in separate parties at Echo &Rig on Thursday.

“In South Carolina, the winner of the latest Powerball lottery has chosen to remain anonymous. I’m guessing it’s that cashier at Cracker Barrel with the Learjet.” — Conan O’Brien