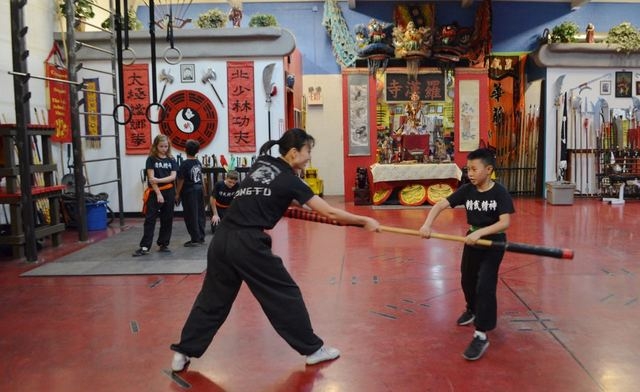 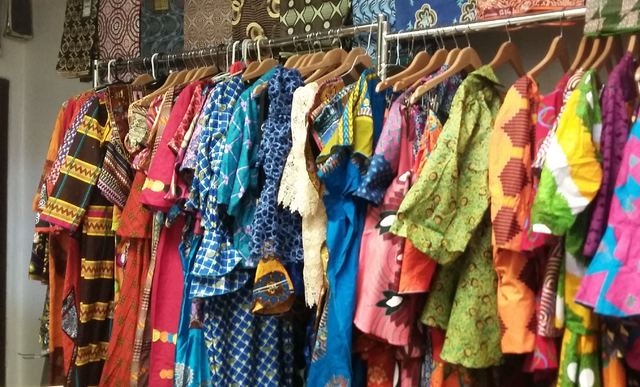 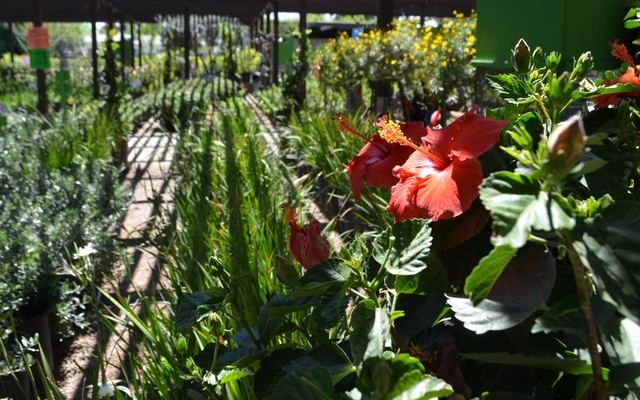 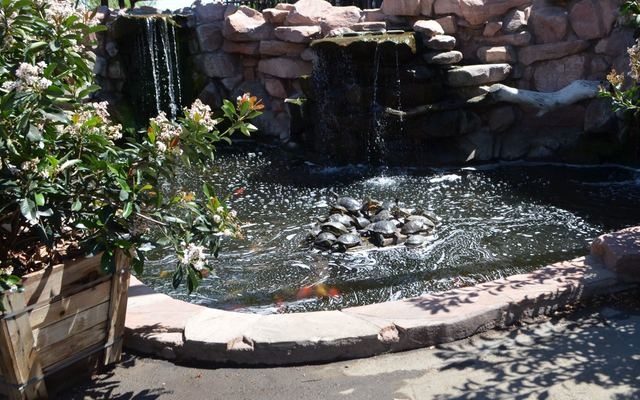 Turtles sun themselves in a stack in a pond at Moon Valley's Plant World Nursery, 5311 W Charleston Blvd. Ginger Meurer/Special to View 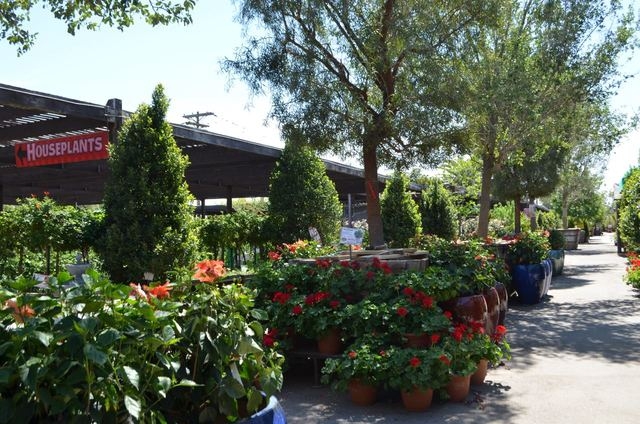 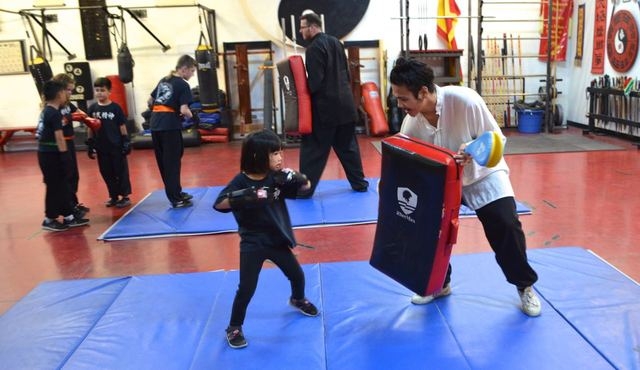 Alicia Young, 5, works with Alex Baginski in a children's class at the Lohan School of Shaolin, 3850 Schiff Drive. Ginger Meurer/Special to View 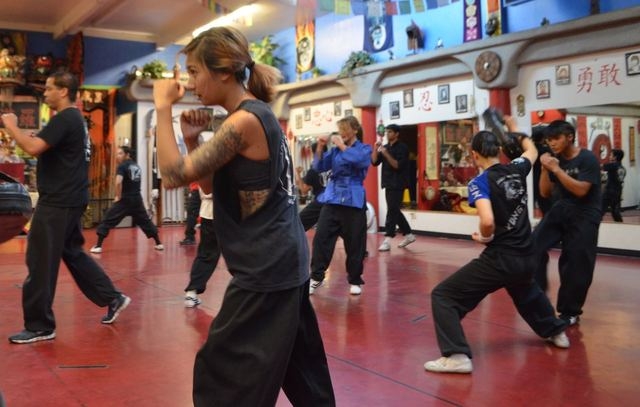 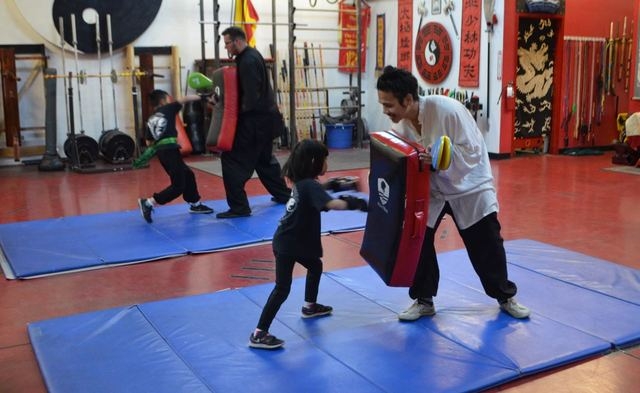 Alicia Young, 5, works with Alex Baginski as her brother Ethan works in the background with instructor Christopher Nason in a children's class at the Lohan School of Shaolin, 3850 Schiff Drive. Ginger Meurer/Special to View 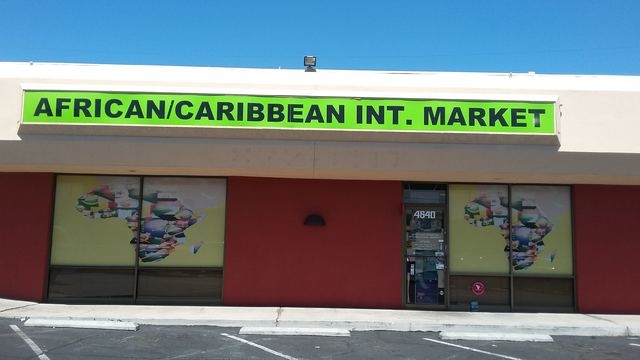 Does spring fever have you longing to leave Las Vegas? If work, school or even finances are holding you close to home, there are plenty of places to visit in Spring Valley and the southwest that will take you on a trip, sometimes without even leaving your ZIP code.

Chinatown Plaza, 4255 Spring Mountain Road, is an obvious stop for many seeking that somewhere-else sensation.

In her 2009 book “American Chinatown: A People’s History of Five Neighborhoods,” Bonnie Tsui explained that Las Vegas’ Chinatown is unlike traditional Chinatowns, “which sprang up because early Chinese had nowhere else to go.”

“When I told people I was going to Las Vegas to visit its Chinatown, the response I got was nearly the same each time: ‘Las Vegas has a Chinatown?’, ” Tsui wrote. “As the common thinking goes, Chinatown is old, crowded, for Chinese-speaking immigrants … but newer waves of immigration have brought educated, upwardly mobile Chinese straight to the suburbs, where they can buy their homes and cars and send their children to better schools.”

Las Vegas’ Chinatown is different because, like many of the surrounding communities from Summerlin to Green Valley, it was master-planned.

In the early 1990s, Taiwanese-born immigrant James Chen made frequent trips to Las Vegas from his home in California. He loved the city but was frustrated when trying to find Chinese cuisine. In other big cities, he would simply head to Chinatown.

But as Tsui explains, in Las Vegas, there wasn’t one. Chen wondered if it would be possible to launch his own.

“Because there were a lot of Asian tourists, from China and from the U.S., they might be looking for those same things I was,” he told Tsui.

Chen and his partners bought 7 acres on Spring Mountain Road to build the beginnings of a Chinatown. Joe Shen, Chinatown Plaza property manager, said the plaza was founded by three partners with capital from Taiwan. One of them, Henry Hwang, continues to manage it today. Construction started in 1993, and the plaza opened in 1995.

“The themed plaza was built with the traditional Tang-dynasty structure with a unique statue featuring the famous Chinese story ‘Journey to the West,’ ” Shen wrote via email. “The plaza was also built to offer authentic Chinese cuisine, which was not readily available in Las Vegas but highly demanded by Chinese tourists. In addition, it offered the local Chinese community a popular Chinese supermarket.”

Shen said the plaza grew from 70 percent occupancy in 1995 to being full of businesses today. He estimates it gets at least 1 million visitors a year.

Shen pointed out that Chinatown isn’t just a retail and dining hub. It offers culture, too. And for more than 20 years, the Chinatown Plaza has hosted one of the city’s largest Chinese New Year celebrations, which features traditional food and entertainment.

A perpetual highlight of the festivities are martial arts performances and lion dancing presented by the Lohan School of Shaolin, 3850 Schiff Drive. School founder Sifu Steven Baugh said it is as old as Chinatown and that he couldn’t imagine operating it anywhere else.

Baugh’s heritage is Native American and Mexican, but he said that doesn’t stop many from assuming he’s Asian.

Inside the school, tucked in the back of The Center at Spring Mountain, Baugh led young Kung Fu students in a practice on a recent evening. Then, as his more senior students took the helm for one-on-one work, he talked about how he was introduced to Kung Fu as a kid before anyone really knew what it was.

At 12, Baugh said he was sick, and Western medicine “wasn’t doing it.” So his family tried traditional Chinese medicine, starting with acupuncture and building into Kung Fu training to give him strength.

Working with teachers who choreographed for Hollywood, Baugh is convinced Kung Fu is a large part of how he survived while growing up in South Central Los Angeles.

Moving to Las Vegas in 1988, he started out teaching from his garage, then at churches, dance studios and other assorted spots around the community before he was encouraged to bring the school to Chinatown in 1993.

Now working on his second generation of students, he said the art is transformational. He pointed out students working in the background who had started as kids and now are regional, national and even world champions.

But the stars of the school are the lion dancers, a team that performed in 52 shows in the last year. The colorful traditional dances are taught in a separate class, but Baugh insists dancers and musicians learn martial arts first.

“You can tell the difference,” he said. “A lot of teams in L.A. now are just lion dancers, and they look so soft and weak. They don’t have any power. My teacher said they look more like puppies than lions. So, in our tradition, you have to be a martial artist in order to do the lion dance. I know that’s what makes a difference.”

Lion heads of assorted sizes, shapes and colors fill the walls in the martial arts studio. Baugh said they go through them swiftly and donate some to schools in Mexico once they need repairs.

“They’re supposed to last three years, but some of the kids are so strong, they break them in the first month or two. You can use them until the frame breaks,” he said.

Martial arts instruction is open to children as young as 5. Baugh said he won’t go younger because the joints and tendons aren’t set in younger children, and too much stress too early can lead to joint problems later.

Baugh said Alicia has been visiting the studio since she “was still in her mother’s stomach.” She used to watch her brother Ethan, now 11, and demanded to learn Kung Fu, too.

“When she was 2 or 3, she kept wanting to join in, but she was too little,” Baugh said.

While a beginning age for students is set, Baugh said the sky is the limit for those seeking to learn the art.

“Kung Fu is made for everybody. There’s something for all ages, sizes and genders,” he said.