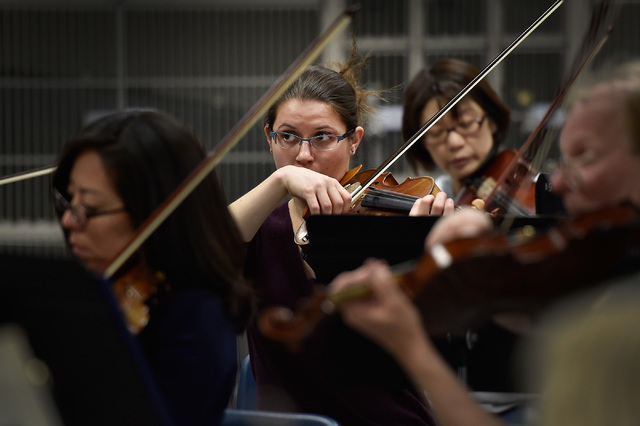 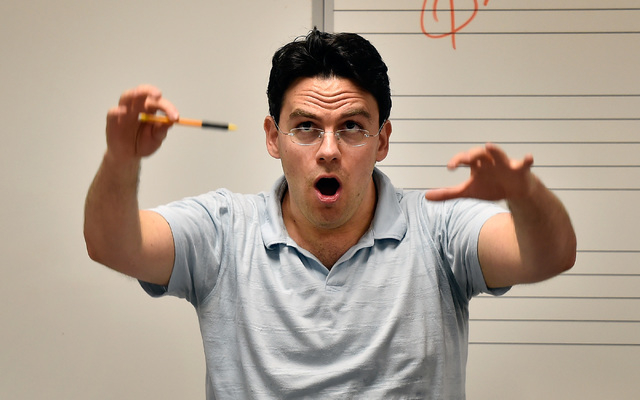 Guest conductor Dennis Doubin gestures as he leads the Henderson Symphony Orchestra during a rehearsal at Greenspun Junior High School May 2, 2016. David Becker/View 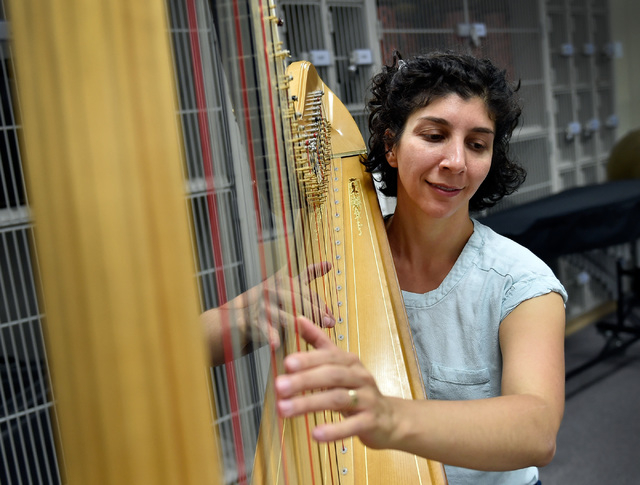 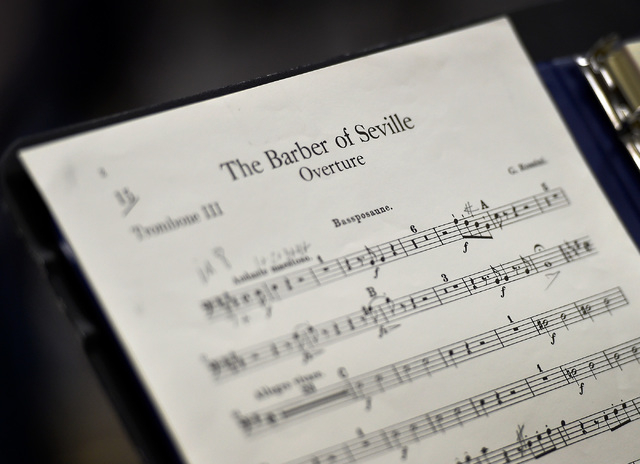 Sheet music for the opera "Barber of Seville" is displayed on a music stand during a Henderson Symphony Orchestra rehearsal at Greenspun Junior High School May 2, 2016. David Becker/View 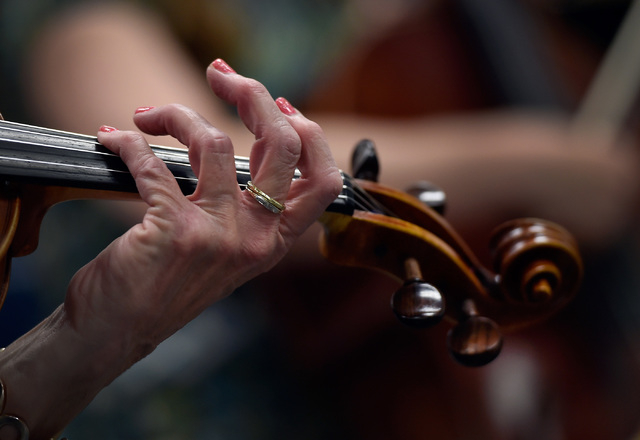 A woman's hand works the fingerboard on a viola during a Henderson Symphony Orchestra rehearsal at Greenspun Junior High School May 2, 2016. David Becker/View

While it continues to offer a variety of concerts for its current season, the Henderson Symphony Orchestra has been searching for a new permanent conductor.

“Our former conductor (Taras Krysa) was with us 9½ seasons,” said Bethany Stone, a cellist with the group who is also a board member. “When he finished his last season, we began the search for a new candidate.”

Candidates have not only been interviewing with board members with the group but also have filled in as guest conductors at various concerts.

Instead of just looking locally, board members for the orchestra decided to take the search nationwide.

It received about 54 applicants and whittled it to four: two locals and two from out of town.

The board selected Geoff Neuman, a Henderson resident and local musician, as its interim director. A string bass player, Neuman has filled in with the orchestra on occasion throughout the years.

“I truly believe in the mission of the orchestra,” he said. “So when the opportunity came up to be the interim conductor, I took it.”

Neuman played in various concerts throughout the season, such as the Veteran’s Day Concert and the Young Artist Concert. He also threw his hat into the ring to become the group’s permanent conductor.

“This is my community, and I am invested in it,” he said. “I think I know what the community needs and how to enhance the mission of the orchestra.”

Each candidate was tasked with being a guest conductor at one of the orchestra’s bigger concerts. There are two shows left in the season — excluding the Independence Day Celebration scheduled for July 3 at Lake Las Vegas.

“It’s amazing we will have him to conduct our opera concert,” Stone said.

Alexandra Arrieche will take on “Metropolis,” in which the orchestra is slated to play a live score to the black and white movie at 8 p.m. June 10 at the Henderson Pavilion.

After the last conductor has a chance to perform, the board will decide on the best candidate. The board also has heard from each candidate to learn their visions for taking the orchestra forward.

“Each candidate brings different ideas and backgrounds,” Stone said, adding that the orchestra has made progress in its mission throughout the years and grown in size.

While it has a vast number of musicians on its roster, not all of them play at every concert. Stone said many have paying jobs at shows on the Strip, which take priority over volunteering.

As of now, the group offers its concerts free. But moving forward, it has to decide if that’s the best strategy, Stone said.

On one hand, she said, the way the group is set up now gives artists a chance to have an outlet for their music and the community a chance to listen. However, she added that the group has debated charging in order to raise funds and the orchestra’s status.

The orchestra also has looked into getting a permanent home instead of relying on venues — it would also give it a space to rehearse.

“Right now, we are limited to the time of year we can do concerts,” Stone said.

As the orchestra looks at its options for the future, it needs a conductor who has a vision to contribute.

“We hope to have a choice by July,” Stone added.

2
EDC Day 1: Everything you need to know as festival returns — PHOTOS