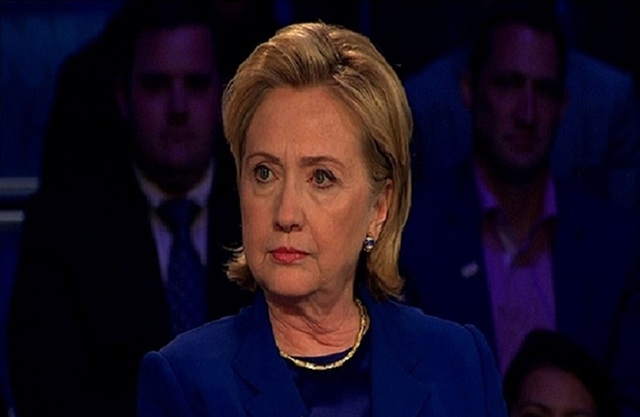 In Hillary Clinton’s first national interview of the 2016 race, she attacked her Republican rivals on immigration and dismissed the suggestion that the American people have a problem trusting her.

“People should and do trust me,” she told CNN’s Brianna Keilar.

She blamed the “barrage of attacks that are largely fomented by and coming from the right” for fueling a perception that trust is an area of vulnerability for her.

Clinton displayed little hesitation about attacking Republicans herself, saying that she is “very disappointed” in Donald Trump for his comments about immigrants and in the Republican Party for not condemning his remarks more quickly.

She then pivoted to skewering the entire GOP field for their immigration stance, saying, “They’re on a spectrum of hostility, which I think is really regrettable in a nation of immigrants like ours.”

The interview foreshadowed the Clinton that will hit the campaign trail in the coming months as election season heats up. She was occasionally defensive, especially when pressed on whether she has any responsibility for the public’s mistrust in her. But she had no problem with going on the offense against her Republican challengers.

“He doesn’t believe in a path to citizenship. If he did at one time, he no longer does,” she said.

The Bush campaign rebuffed Clinton’s criticism and instead accused her of flip-flopping on immigration.

“Hillary Clinton will say anything to get elected and her numerous flip-flops on immigration prove it,” said Emily Benavides, a Bush campaign spokeswoman, in a statement.

“As he outlined in his book on this issue, Gov. Bush believes in a conservative legislative solution to fix our broken immigration system that includes earned legal status for those currently in the country after they pay fines and taxes, learn English and commit no substantial crimes while securing our border,” she said.

Clinton also blamed the city of San Francisco for mishandling the case of an undocumented immigrant who had been deported five times before killing a woman there — in a sanctuary city where local law enforcement do not enforce federal immigration laws.

“The city made a mistake, not to deport someone that the federal government strongly felt should be deported,” she said. “I have absolutely no support for a city that ignores the strong evidence that should be acted on.”

The full interview aired Tuesday on “The Situation Room with Wolf Blitzer” and will re-air at 8 p.m. on “Anderson Cooper 360.”

Pressed on why the public has a hard time trusting her, Clinton maintained she faced “the same kind of onslaught” in her two New York Senate campaigns and her confirmation as secretary of state, and said Republicans have sought to turn controversies like her use of a private email address and the Clinton Foundation’s actions against her.

And that, Clinton said, is why national polls and swing-state surveys have found that a majority of voters say they don’t see her as honest and trustworthy.

A Quinnipiac University Swing State poll found that by margins of 8 to 14 percentage points voters in Florida, Ohio and Pennsylvania are skeptical of Clinton’s trustworthiness.

“I think it’s understandable that when questions are raised, people maybe are thinking about them and wondering about them,” Clinton said.

“But I have every confidence that during the course of this campaign, people are going to know who will fight for them, who will be there when they need them, and that’s the kind of person I am and that’s what I will do, not only in a campaign but as president,” she said.

Asked whether she played a role in the sentiment reflected in polls that she’s not trustworthy, Clinton said: “This has been a theme that has been used against me and my husband for many, many years. And at the end of the day, I think voters sort it all out.”

She similarly dismissed questions about her use of a personal email address on a private server while serving as secretary of state.

Clinton said she turned over all the emails — including some which show her using a secured fax machine, or asking for iced tea during meetings — that had anything to do with public business, and that she broke no laws in sticking with one device because she’s not technically savvy.

“This is being blown up with no basis in law or in fact. That’s fine, I get it — this is being, in effect, used by the Republicans in the Congress. OK,” Clinton said. “But I want people to understand what the truth is, and the truth is, everything I did was permitted and I went above and beyond what was expected.”

If elected president, Clinton said she doesn’t have any plans to push for the closure of the Clinton Foundation — which has faced criticism for accepting foreign contributions during her tenure as America’s top diplomat.

“I have no plans to say or do anything about the Clinton foundation other than to say I am proud of it and I think for the good of the world, its work should continue,” she said.

The interview spanned a broad range of topics — among them a discussion of adding a woman to the $10 bill. Clinton declined to select a favorite woman for the honor, but suggested a woman should instead go on a $20.

“I don’t like the idea that as a compromise you would basically have two people on the same bill. One would be a woman. That sounds pretty second class to me,” Clinton said. “So I think a woman should have her own bill.”

Nor would she pick which Saturday Night Live actress, Amy Poehler or Kate McKinnon, plays the best Hillary Clinton.

“Amy’s a friend of mine and Kate’s doing a great job. You’re not going to get me to pick one or the other,” she said. “I think I’m the best Hillary Clinton.”