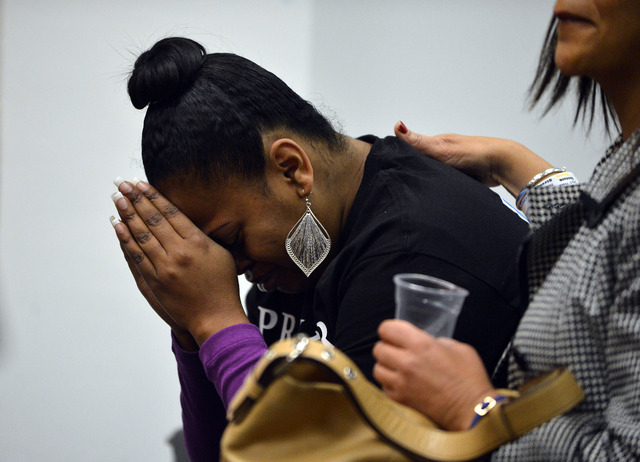 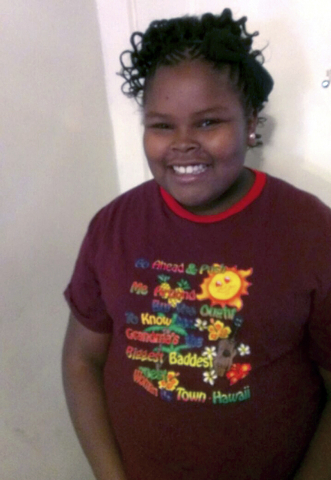 This undated file photo provided by the McMath family and Omari Sealey shows Jahi McMath. McMath remains on life support at Children's Hospital Oakland nearly a week after doctors declared her brain dead, following a supposedly routine tonsillectomy. Her family was expected to appear with hospital officials in court Monday, Dec. 23, 2013 to announce the name of the independent physician they have chosen to provide a second opinion on the girl's condition. (AP Photo/Courtesy of McMath Family and Omari Sealey, File) 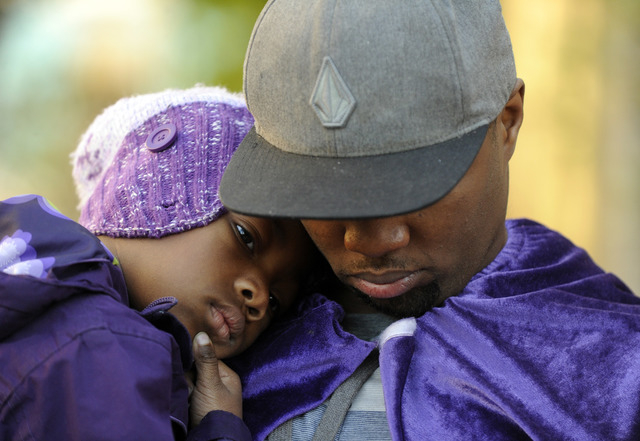 Quinton Reynolds, of Emeryville, wears a purple cape as he holds his daughter Qniyah Reynolds, 4, as he gathers with others outside of Children's Hospital Oakland in support of Jahi McMath in Oakland, Calif., on Monday, Dec. 23, 2013. McMath was declared brain dead after experiencing complications following a tonsillectomy at the hospital. (AP Photo/The Contra Costa Times-Bay Area News Group, Susan Tripp Pollard)

OAKLAND, Calif. — The uncle of a 13-year-old Northern California girl declared brain dead after suffering complications following a tonsillectomy says the family is trying to give the girl as normal of a Christmas as possible.

Omari Sealey says the family will wait until Thursday to discuss whether to appeal a judge’s decision allowing Children’s Hospital Oakland to remove his niece Jahi McMath from life support.

Alameda County Superior Court Judge Evelio Grillo issued the ruling Tuesday but gave the family until 5 p.m. on Dec. 30 to file an appeal. Jahi’s family has said they believe the girl is still alive.

Sealey says the family plans to spend Christmas Day at the hospital. They’ve set up a Christmas tree in Jahi’s room with presents for her and her siblings.

Relatives said the family has not decided if they would keep fighting.

“It’s Christmas Eve, there is still time for a miracle,” said Omari Sealey, the girl’s uncle. He said the family would discuss and decide later whether to appeal or to allow Children’s Hospital of Oakland to remove the girl from a ventilator.

“Prayers are more important than ever before,” Sealey said. “Because the clock is ticking.”

Jahi’s mother, Nailah Winkfield, didn’t attend the court hearing, remaining with her daughter in the hospital where she will spend Christmas Eve.

Sealey said Winkfield and other family members have remained with the teen since complications arose Dec. 9 after a tonsillectomy.

“Room 325 of Children’s Hospital is our new home,” Sealey said.

Grillo based his decision on the conclusions of two doctors, court-appointed Dr. Paul Fisher of Stanford University and the hospital’s Dr. Robin Shanahan.

Fisher examined the girl for several hours on Monday and reported to the judge Tuesday that the teen was brain dead, the same conclusion Shanahan reached.

Grillo said he had no other choice but to allow the hospital to remove the ventilator.

The hospital had argued that the teen had no chance of recovery since all brain function had ceased.

“Our sincere hope is that the family finds peace and can come to grips with the judge’s decision,” hospital attorney Doug Strauss said outside court after Grillo’s ruling.

Jahi’s family has been battling with hospital administrators over keeping her on a ventilator since the teen suffered cardiac arrest after bleeding profusely following her operation.

The family said that as long as the teen was breathing, there was hope of recovery. The family also demanded an independent examination. They have said they believe Jahi is still alive and that the hospital should not remove her from the ventilator without its permission.

“Because Ms. McMath is dead, practically and legally, there is no course of medical treatment to continue or discontinue; there is nothing to which the family’s consent is applicable,” the hospital said in a court filing on Tuesday.

The case is now out of Grillo’s court and the decision will be up to the California Court of Appeal if the family decides to pursue its legal case to keep Jahi on the ventilator.

The family thanked Fisher, the court-appointed doctor, for what they called a thorough examination of Jahi, and he shook the hand of each family member before leaving court.

“I don’t know if we have accepted his decision yet,” said Sealey, Jahi’s uncle. “There’s still time for a miracle from now and until Dec. 30.”

The family had demanded that another doctor of its choosing examine Jahi.

In ruling Tuesday, the judge made no mention of the family’s desire for Dr. Paul Byrne, a pediatric professor at the University of Toledo, to examine the teen.

Byrne is the co-editor of the 2001 book “Beyond Brain Death,” which presents a variety of arguments against using brain-based criteria for declaring a person dead.

In a phone interview, Byrne said he could not comment in detail because he had not seen any of Jahi’s medical records. But the fact that her ventilator is still functioning properly is a sign that she is alive, he said.

Arthur L. Caplan, who leads the Division of Medical Ethics at NYU Langone Medical Center and is not involved in Jahi’s case, told The Associated Press that once brain death has been declared, a hospital is under no obligation to keep a patient on a ventilator.

“Brain death is death,” he said, adding, “They don’t need permission from the family to take her off, but because the little girl died unexpectedly and so tragically, they’re trying to soften the blow and let the family adjust to the reality.”