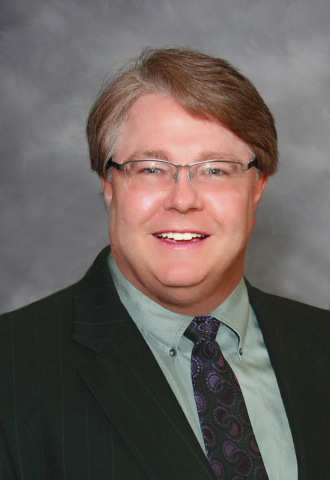 Local Realtor Keith Lynam takes over Jan. 1 as president of the Greater Las Vegas Association of Realtors with some unique qualifications.

First, he is almost certainly the first GLVAR president since the association was founded in 1947 to have previously worked as a professional lobbyist for local Realtors.

He also points out he is one of the few GLVAR presidents, at least in recent years, to work on the front lines as a real estate agent, not as a manager, broker or owner of their own real estate firm.

Lynam may have also come up with the most unique theme for his one-year term leading the largest professional organization in Southern Nevada. His 2015 theme of “Under all is the Land” comes from the Code of Ethics all Realtors have vowed to uphold since it was adopted in 1913.

On the November evening he was officially installed as GLVAR’s president for 2015, Lynam explained why he considers the phrase to be so significant for him and what he calls his Realtor family.

“It forms the foundation of our Realtor family. These five powerful words become the promise we make to every homeowner across this great nation of ours. It’s a pledge that our family stands firm on the front lines of the battle to protect their homes from all others. It’s a promise that we are here to protect private property rights for everyone.”

Lynam knows more than most about the role Realtors play in protecting property rights, especially in Nevada, where they have engaged in high-profile campaigns to defeat efforts to use eminent domain to seize local mortgages, among other examples.

Before becoming a Realtor in 2004, Lynam earned his living owning a government affairs firm. He spent years lobbying for local Realtors and working with state lawmakers and local elected officials on a range of issues, from proposed taxes to state laws and local ordinances related to real estate.

Lynam traces his passion for politics back to his teenage years putting up yard signs for candidates in Montana. After college at the University of Montana, he moved to Las Vegas and worked on a congressional campaign and “fell in love with the city.” He eventually started his own government affairs firm, but he eventually found himself looking for a change from a business “based on someone else pushing a green or red button.”

After working so closely with Realtors, it seemed fitting for him to enter the industry himself. He became a Realtor as the local housing market was approaching a historic boom. Within five years, he survived the equally historic housing downturn by working with distressed homeowners and specializing in time-consuming short sales.

A decade after joining GLVAR as a member, Lynam finds himself leading the association during a time of recovery, with median prices for local single-family homes well up from a bottom of $118,000 in early 2012, but still a long way down from their 2006 peak of $315,000. He knows there is still distress in the market and would like to see market conditions — and laws regulating real estate — evolve at a more rapid rate.

Lynam began volunteering and pursuing leadership positions almost from the time he joined GLVAR. His many accomplishments and positions include serving as chairman of GLVAR’s political affairs committee and as a board member of the political action committees of the GLVAR and Nevada Association of Realtors, where Lynam now serves as NVRPAC chairman, and as longtime chairman of the NVAR’s legislative committee. He served on the GLVAR Board of Directors and was GLVAR’s president-elect in 2014.

In addition to making a living as a Realtor working for Windermere Prestige Properties in Southern Nevada, Lynam expects to spend more than 1,000 volunteer hours during 2015 on GLVAR business. Even with a busier schedule, he plans to continue teaching real estate courses at GLVAR.

“Teaching is my connection to our members,” he said, adding that he “discovers what is going on in the market, or hear about any problems our members are having, all in a three-hour class.”

Fitting for someone who spent years as an aggressive advocate for what he calls the “Realtor party,” Lynam is the first to admit he’s not the shy type. As anyone who knows him can attest, he’s more than happy to share his opinion and usually eager to defend his positions, though he also said he’s just as quick to move on from a heated debate.

“I’m Irish-Catholic,” he joked. “What we call communicating, some call arguing.”

Lynam said growing up in a small rural town in Western Montana in a close-knit family shapes his personality and fondness for family.

When he’s not working, he spends as much time as possible with his own family, especially his 12-year-old daughter, Khyla, who often accompanies him to GLVAR events.