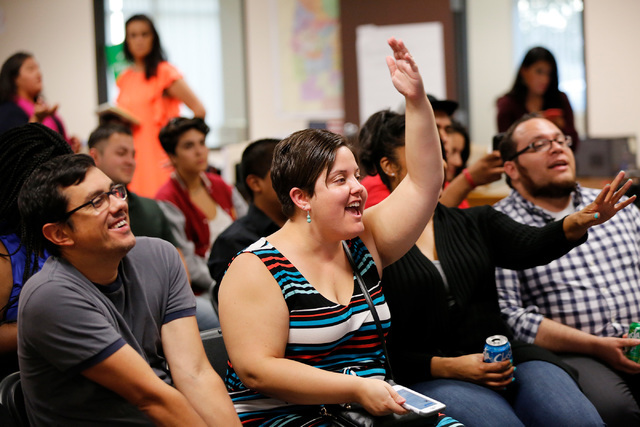 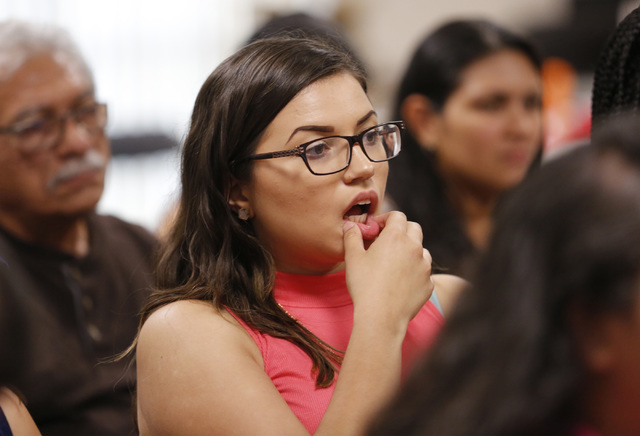 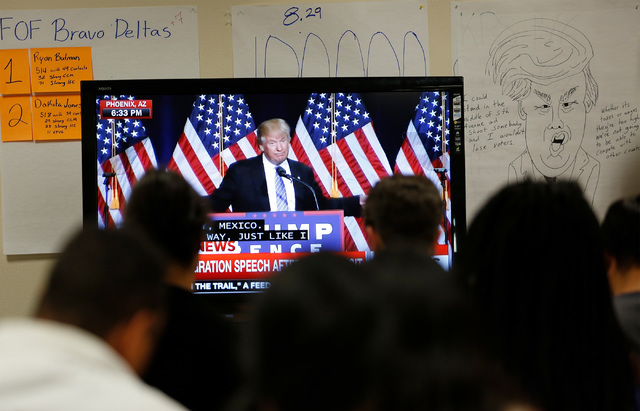 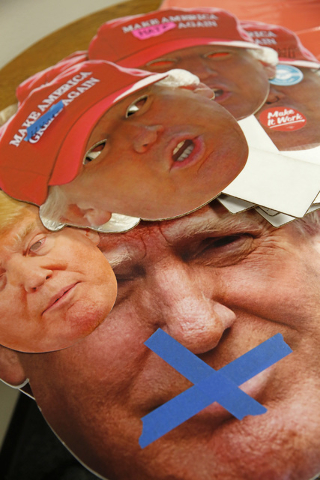 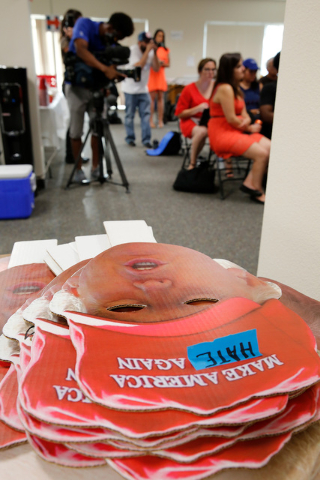 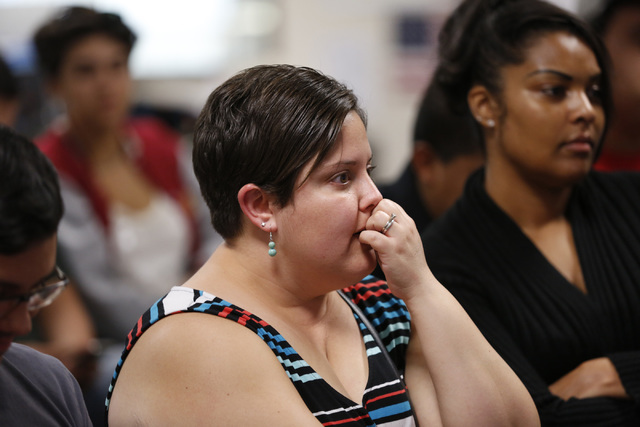 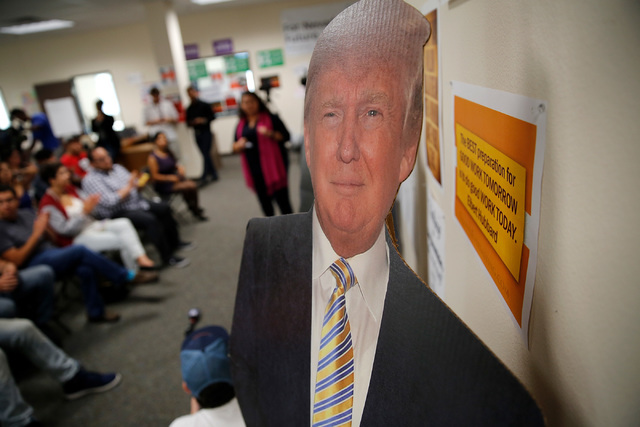 A cutout shaped Republican presidential candidate Donald Trump is seen at an office of For Nevada's Future in North Las Vegas, Wednesday, Aug. 31, 2016, as people from Nevada progressive organizations gather to watchTrump speaking in Phoenix on a TV screen. (Chitose Suzuki/Las Vegas Review-Journal) 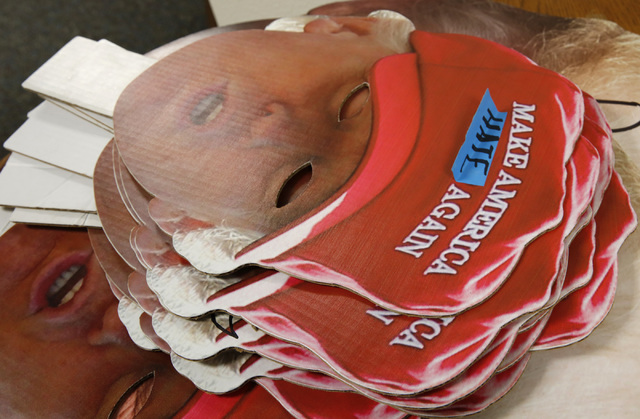 Donald Trump’s 10-point speech on immigration drew a steady chorus of groans and laughter from a watch party of about 40 people inside the Las Vegas offices of For Nevada’s Future, a progressive political group.

“Trump’s America is not what I signed up for,” said Leo Murrieta, 30, a naturalized U.S. citizen who arrived in Las Vegas from Mexico when he was a week old. “He demonizes and dehumanizes us.”

During a fiery address Wednesday in Arizona, the Republican presidential nominee doubled down, vowing that, if elected, he will make Mexico pay for a high-tech border wall with sensors, triple the number of U.S. deportation officers and start deporting “2 million” immigrants with criminal records who are in the country illegally on “day one” of his administration.

“We will accomplish all of the steps outlined above, and when we do, peace and law and justice and prosperity will prevail,” Trump said.

“These are impulsive, emotionally driven points. They’re not real policy,” Morales said. “Today he furthered alienated us immigrants who were looking for a solution in him. I was hoping for a detailed policy speech. Something I could analyze and really study well.”

Trump’s stance on immigration when he started his campaign in June 2015 helped catapult him to the front of a crowded field of Republican candidates after he called undocumented immigrants “rapists” and declared the need to build a wall along the U.S. border with Mexico.

In Nevada, immigrants in the country illegally make up 8 percent of the state’s population, the largest share in the nation, according to a 2015 report by the nonpartisan Pew Research Center.

Before his speech, Trump’s Nevada campaign office released a statement.

“Donald Trump is the only candidate in this race with a plan to end illegal immigration,” said Charles Muñoz, Trump’s Nevada state director. “Nevada has the highest percentage of illegal immigrants of any state in the nation and this has had a damaging effect on the wages, prosperity and security of legal residents and American citizens.”

Trump will “secure our borders, enforce our laws, remove illegal immigrant criminals and eliminate sanctuary cities,” Muñoz added. “By contrast, Hillary Clinton will leave our borders wide open, jeopardizing the economic and personal security of Nevadans, and award amnesty to those who have broken our laws.”

“It should come as no surprise that Donald Trump’s campaign, and his mouthpiece here in Nevada, are once again spouting ignorance and hate directed at immigrant communities,” Vidal said in a statement. “However they want to spin it, the fact remains that what Donald Trump and Republicans who support him are proposing is a plan to tear apart families and communities who contribute millions every year to Nevada’s economy.”

Trump’s immigration speech followed a trip to Mexico he made earlier in the day to meet with President Enrique Peña Nieto. Trump told reporters they talked about the wall but “didn’t discuss payment of the wall.” But Peña Nieto tweeted that he had told Trump Mexico wouldn’t pay for the wall.

Clinton campaign chair John Podesta put out a statement saying “Trump choked” at his first opportunity to “make good on his offensive campaign promises.” After Peña Nieto’s tweet, Podesta added, “It turns out Trump didn’t just choke, he got beat in the room and lied about it.”