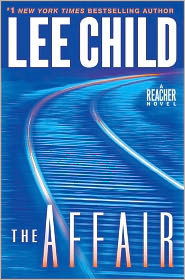 I began reading Lee Child’s Jack Reacher novels in 1998 when the “The Killing Floor” was first published as a mass-market paperback. The novel was a winner in every sense. I couldn’t wait for the next book to come out and purchased “Die Trying” when it was released in hardcover instead of waiting for the paperback. From then on I’ve read every Jack Reacher novel in hardcover.

All of the books have been good, while some of them have been great. Still, I secretly felt Child would never be able to top “The Killing Floor.” I was wrong. The newest Jack Reacher novel, “The Affair,” has now become the best in the series.

“The Affair” takes place while Reacher is still in the Army during 1997. It’s his last mission before being booted out of the service for being an honest cop who always gets to the truth. This time around, Reacher is ordered to Carter Crossing, Miss., to act as an undercover investigator in the slaying of a beautiful white woman, who may have been dating the commander of the nearby military base. The base is where an elite group of Rangers stays when not fighting in Kosovo. The commander, Reed Riley, is the son of a powerful senator, who also happens to control the purse strings of the armed forces.

Once Reacher arrives in Carter Crossing, he encounters the local sheriff, Elizabeth Deveraux, an ex-Marine and the daughter of the previous sheriff. She tough and beautiful. The pair don’t trust each other at first but gradually join forces as more deaths occur.

Reacher discovers that the white woman wasn’t the first female killed by being hung upside down and having her throat slit. There were two black women before her, who were just as lovely and who were also dating the base’s commander. As Reacher slowly, but methodically, gets closer to the truth, the officers above him put up roadblocks. They’re more concerned with protecting the Army’s good name than finding the killer.

Reacher soon becomes intimately involved with the sheriff, only to find out that all roads seem to lead to her. Reacher can trust no one. If the killer doesn’t get to him first, the Army just might.

In many ways, I consider “The Affair” to be a perfect crime novel, filled with just the right amount of suspense and action. The characters are strong and of course there are a couple of twists at the end. Child is definitely a master of the written word. He also manages to capture the small-town atmosphere and how dependent the community is on the nearby military base for its financial security.

And, what about the main character — Jack Reacher? It was fun to see how everything began for our slightly tarnished hero and how he ended up being voluntarily discharged from the Army. He knew it was coming if he stayed on the same path in his quest to find a killer, but it still surprised him when it happened. You put your life on the line time and again in the service of your country, only to discover that the upper brass doesn’t care about what you’ve sacrificed to get the job done. Of course, if Reacher hadn’t left the military, we wouldn’t have a 16-novel series to read.

So, if you’re waiting for the paperback to come out — don’t. Run out and get this hardcover, whether it’s new or used. You don’t want to wait a year to read this. It’s that good. Now, all I want to know is how the author intends to top this one.

Wayne C. Rogers is the author of the horror novellas “The Encounter” and “The Tunnels,” both of which can be purchased at Amazon’s Kindle Store for 99 cents each.