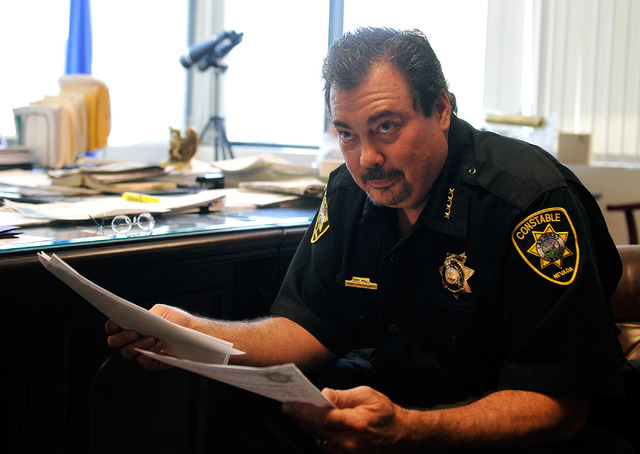 Give John Bonaventura credit. Any bum can lose an election. It takes a special brand of public official to serve with such devastating distinction that he actually destroys the office he’s occupying.

But that is what Bonaventura has managed to do to the position of the Las Vegas Township constable. Not long after pinning on the badge, he gained a reputation for throwing his weight around and surrounded himself with sycophants. The result of his abbreviated tenure has been at once comic and calamitous.

Instead of shouting a prayer of thanks every day for his great good fortune of being elected to a do-little job that pays $103,000 a year plus handsome benefits and offers a modicum of respect in the community, Bonaventura wasn’t satisfied. He wanted to be a player. He wanted to build a fiefdom. He’s like some of his predecessors in that regard.

He got more than a little lost along the way. He decided that what the government office in charge of kicking locals out of their residences really needed was a reality TV series. On the series pilot, his deputies were captured in all their foul-mouthed glory. They were supposed to serve court documents and eviction notices, not work on their best Clint Eastwood impersonations. We should all be thankful the pilot never aired.

And there are the sexual harassment allegations that have arisen under Bonaventura’s watch. At times you’d almost think it was the 1950s at the constable’s office.

Add to that the inter-jurisdictional fighting with other constables, the petty political games, and the extremely questionable hiring practices, and Bonaventura doesn’t have much to place on the plus side of his career ledger.

In addition to the shambles he’s made of the office and his reputation in recent years, this was a particularly tough week for Bonaventura. The Review-Journal’s Ben Botkin, who has been sorting through the debris field of the constable’s office, obtained a recording of a foul-mouthed Bonaventura excoriating Clark County Commission Chairman Steve Sisolak and posturing about spending the office’s $3.9 million reserve fund before the lights are turned out for good.

He says, “I wish I could just spend it all and then if they did eliminate the office say, ‘F—- you, Sisolak, you got nothing.’ … I wish I could do that somehow but you can’t spend that much money.”

Yeah, maybe he was just kidding about draining the coffers. Do you think?

In addition, Bonaventura’s desperate legal attempt to overturn the County Commission’s decision to close the constable’s office was dismissed by District Judge Rob Bare. Bonaventura can still appeal to the state Supreme Court, and I’m guessing he’ll probably do so.

What Bonaventura lacks in logic he more than makes up for in audacity. Not satisfied with providing his enemies at the county with enough ammunition to shutter the constable’s office, in March he filed for the County Commission District G seat currently held by Mary Beth Scow.

Scow isn’t above a serious challenge, but Bonavenura’s candidacy should come with a laugh track. Trouble is, with low voter turnouts expected for Tuesday’s primary, anything can happen. Yes, anything. Even the unthinkable — yet another political life for Bonaventura.

Although many observers believe he’s benefited solely from name recognition, Bonaventura has also been an active campaigner who knows how to count votes. He won an Assembly seat that way, and the constable’s job, too.

Bonaventura makes the least of his predecessors — and we’re talking about folks whose behavior raised everything from eyebrows to the interest of the FBI — appear to be possessed of an old-world charm.

The services provided by the Las Vegas Township constable’s office can be filled by the private sector and Metro. Padlocking the doors was long overdue.

That will leave John Bonaventura without a job.

Unless, of course, he collects enough votes on Tuesday. It would almost be worth the community embarrassment just to see the looks on the faces of the other commissioners.