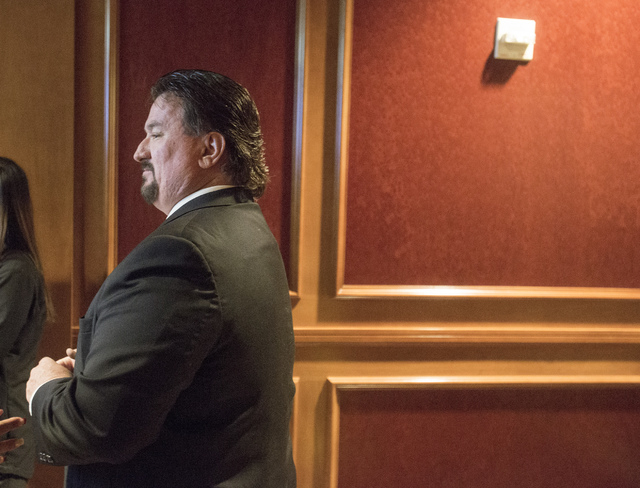 Nevada Republicans met last weekend for the state party’s biennial convention, in part to issue endorsements to candidates who’d agreed to fill out a questionnaire and undergo an interview process.

Many Republican elected officials — including Gov. Brian Sandoval, Senate Minority Leader Michael Roberson and Assembly Minority Leader Pat Hickey — elected to boycott the endorsement process. Sandoval said his record speaks for itself, and the party could make a decision based on that, but the rules clearly said that candidates who skipped the process couldn’t get an endorsement. (Sandoval did anyway, but only upon a motion from the floor.)

But some of the other endorsements showed the clear preference of the party base for more conservative, anti-tax candidates over their establishment brethren, even those in leadership or with a proven history of winning races. Here’s a list of every endorsement the party made, along with some explanatory notes from me.

Congressional District 1: Annette Teijeiro. Teijeiro beat out the only other Republican in the race, attorney Jose Padilla, who announced his candidacy with great fanfare in February. Although the district has a large percentage of Hispanic residents, it’s also overwhelmingly Democratic, and incumbent Rep. Dina Titus owns it.

Congressional District 2: Mark Amodei. No surprise here; Amodei has proven to be reliably conservative, and the district is overwhelmingly Republican.

Congressional District 3: Joe Heck. Not only is Heck the only Republican in this race, he’s also been a fairly conservative candidate. Although he’s tried to carefully thread the needle on issues that might get him in trouble with the base (comprehensive immigration reform, extending unemployment insurance), Heck’s voting record shows he’s definitely a conservative.

Congressional District 4: Niger Innis. The first conservative-versus-establishment pick on the list, Innis got the nod over Assemblyman Cresent Hardy, R-Mesquite. Although both men have worked hard to show who’s more willing to cater to the base, Innis has gone the extra mile — especially during the recent standoff over illegally grazing cattle on federal lands near the Cliven Bundy ranch — to show he’s one with the GOP’s most radical wing, saying things such as “Cliven Bundy’s fight is a civil rights issue.” (Actually, it’s a tax dispute that escalated when Bundy called for a “range war.”)

Governor: Sandoval. As I said above, this endorsement occurred outside the party’s regular process, perhaps when even Nevada Republicans realized that failing to endorse the popular incumbent (who is, after all, the titular-if-estranged head of the state party) would look as bad as endorsing one of the four other Republican hopefuls on the ticket. The endorsements show a healthy willingness to put principle over pragmatism, but there is an absurdity limit, and the party’s general membership saw it.

Lieutenant governor: Sue Lowden. It’s amazing how Lowden has morphed from conservative-oppressing party insider to dogged conservative outsider in just six years. In 2008, Lowden shut down the state Republican convention in Reno rather than let the conservative insurgent followers of former Texas Rep. Ron Paul take over. She was despised for the tactic, which only delayed the inevitable. But now, she’s the outsider, taking on establishment pick state Sen. Mark Hutchison, R-Las Vegas, with the support of the party’s conservative wing. Hutchison may have the endorsement of Sandoval and the fundraising help that will surely outraise Lowden’s bid, but the base doesn’t like his votes to extend taxes and implement the Affordable Care Act in Nevada. And Lowden has jumped on this issues hard, her past forgotten or forgiven.

Attorney General: Adam Laxalt. No surprise. He’s the only Republican running against Democrat Ross Miller. But Laxalt is not shy about repeating right-wing talking points, rather than just phoning it in.

Secretary of State: Barbara Cegavske. Again, no surprise. The term-limited Las Vegas Republican state senator is the only member of the GOP in this race.

Controller: Ron Knecht. Here, the party had a choice, with two other Republican candidates, including Barry Herr, who ran unsuccessfully for Steve Sisolak’s seat on the Clark County Commission in 2012. But Knecht has always had support in the party, stemming from his days as a member of the “Mean 15” Assembly caucus that delayed a vote on taxes for two special sessions in 2003, during his one and only term in that body. After losing a bid for re-election, he ran for the Nevada System of Higher Education Board of Regents, where he’s a member to this day.

Senate District 9: Vick Gill. Two years ago, Gill was the caucus-endorsed candidate whom Senate leader Roberson believed would provide a great opportunity to keep this district (abandoned by half-term senator-turned-Maxim-model Elizabeth Halseth) in Republican hands. But Gill quickly dropped out of favor (and the race) because of residency questions, and a Democratic attorney Justin Jones, took the seat instead, and kept Republicans from taking over the upper house. Once again, the district is key to whether Democrats or Republicans control the state Senate. So naturally, four Republicans have crowded the field, complicating matters for Roberson’s official choice, attorney Becky Harris. Since Roberson decreed that his picks for races wouldn’t participate in the party’s endorsement process, Gill’s backing is not a surprise. But it will not help Republicans turn Roberson’s title from “minority leader” to “majority leader” in November.

Senate District 16: Gary Schmidt. He got the nod over incumbent state Sen. Ben Kieckhefer, R-Reno, who boycotted along with his caucus. Kieckhefer is reasonable lawmaker, who went along with the governor and fellow Republicans in backing extended taxes, which stirs the ire of the party base. It’s hard to see how the estrangement between the party and its elected officials will be helped here, especially if Kieckefer wins re-election, which he probably will.

Senate District 20: Carl Bunce. Possibly the greatest insult delivered by the state party in its endorsements was in this race, recommending Republicans replace Roberson, the leader of Republicans in the Senate, with party organizer and former Ron Paul operative Bunce. Yes, Roberson boycotted the process, but even if he hadn’t, he’d have had a hard time snagging the nod after embracing extending the sunset taxes and advocating for a new tax on mining as an alternative to The Education Initiative. Roberson has proven himself to be nothing if not unpredictable, so he showed up for part of the state party’s convention, the highest-ranking official to do so (Sandoval, Lt. Gov. Brian Krolicki, U.S. Sen. Dean Heller, Amodei and Heck all had other things to do that day). It’s sometimes hard to understand the civil war roiling the Nevada Republican Party, but this race, and this endorsement, shows more clearly than anything else how the battle is joined.

Assembly District 1: Roger “Oz” Baum. There’s a greater chance of actually being transported by a tornado to an alternate reality in which one journeys on a yellow brick road to Oz than a Republican defeating Assembly Speaker Marilyn Kirkpatrick, but Baum is the only Republican in this race.

Assembly District 2: Assemblyman John Hambrick, R-Las Vegas. The incumbent drew two no-name challengers, but he’s a loyal party soldier, even if his attempts to break into leadership or move up to the state Senate have been thwarted by his fellow Republicans.

Assembly District 3: Jesus Marquez. What do you get when you’re the lone Republican crazy enough to run for the seat formerly occupied by the Assembly’s most liberal member, the late Peggy Pierce? Endorsed, that’s what!

Assembly District 4: Assemblywoman Michele Fiore, R-Las Vegas. The gun-toting Fiore turned out to be even more conservative than anticipated in her freshman session, and she’s moving to cement that reputation (a recent appearance on Chris Hayes’ MSNBC show live from the Bundy ranch was frustrating for the host, as Fiore steadfastly answered Hayes’ reasonable questions with irrelevancies, and later trumpeted her “victory” on Facebook). She’s a natural for the endorsement. One thing, however, Republicans: She spells her first name with just one “L.”

Assembly District 5: Max Miller-Hooks. He beat out four other Republicans to win the chance to take Assemblywoman Marilyn Dondero-Loop’s seat, as she runs for the state Senate. But with a significant registration advantage, the lone Democrat in the race, Jerri Strasser, is sitting pretty.

Assembly District 23: Assemblywoman Melissa Woodbury, R-Henderson. Being virtually invisible during legislative sessions has paid off for this famous daughter, who is considered re-elected since nobody bothered to file against her.

Assembly District 26: Robb Archie AND Lisa Krasner. The only district to see a dual endorsement is also notable in that the only other Republican is the incumbent, Assemblyman Randy Kirner, R-Reno. Kirner irked some conservatives when he supported a bill — later signed by the governor — that allowed Washoe County to vote on a sales and property tax increase to fund schools.

Assembly District 31: Jill Dickman. She got the nod over fellow Republican Ron Schmitt for the right to challenge Assemblyman Richard “Skip” Daly, D-Sparks.

Assembly District 32: Assemblyman Ira Hansen, R-Sparks. Allegations of illegal trapping didn’t hurt Hansen one bit in getting the state Republican Party nod. In fact, they may have helped!

Assembly District 34: Victoria Seaman. The only Republican in a field of four Democrats seeking to replace term-limited Assemblyman William Horne, D-Las Vegas, who is running for a Clark County District Court judgeship.

Assembly District 39: Assemblyman Jim Wheeler, R-Minden. After Wheeler said — on videotape — that he’d reluctantly vote to re-institute slavery if a majority of people in his district wanted him to, he drew national attention, and not in a good way. He’s claimed the remark was facetious (it wasn’t), that it was misinterpreted by the media (it wasn’t) and turned himself into a victim. The party apparently felt his slavery remark wasn’t sufficient grounds to deny him the endorsement.