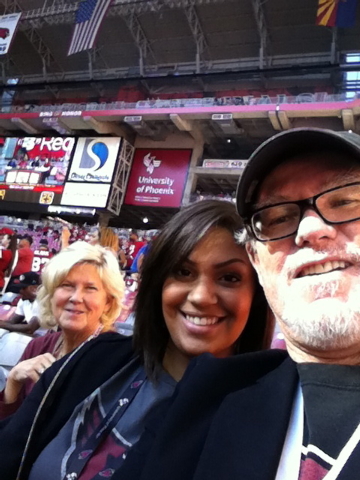 Attention, MSNBC jerks: This is my biracial family. (Sherman Frederick)

When it comes to racial stereotypes, nobody does it “better” than the uber-liberal network MSNBC.

Consider this Wednesday tweet about a Super Bowl Cheerios ad that features a biracial family.

“Maybe the rightwing will hate it, but everyone else will go awww: the adorable new #Cheerios ad w/ biracial family.”

In the world of dumb, this was pretty dumb. One must wonder what kind of work environment exists at MSNBC. First, that the network would allow this kind of tweet to go out under its name, and second, how does an idiotic thought like this exist, even as a joke, in a newsroom of journalists and thinkers?

Anyway, two hours later the post was removed as outraged conservatives posted comments and replies to the tweet, complete with photos of their biracial families.

By the way, this writer is one of them. The picture above is me, my wife and our lovely granddaughter at an Arizona Cardinal game.

“The Cheerios tweet from @msnbc was dumb, offensive and we’ve taken it down. That’s not who we are at msnbc.”

To which I would add that Mr. Wolff ought to take a closer look at his newsroom. There’s a pattern here. You might find that this is exactly who you are.